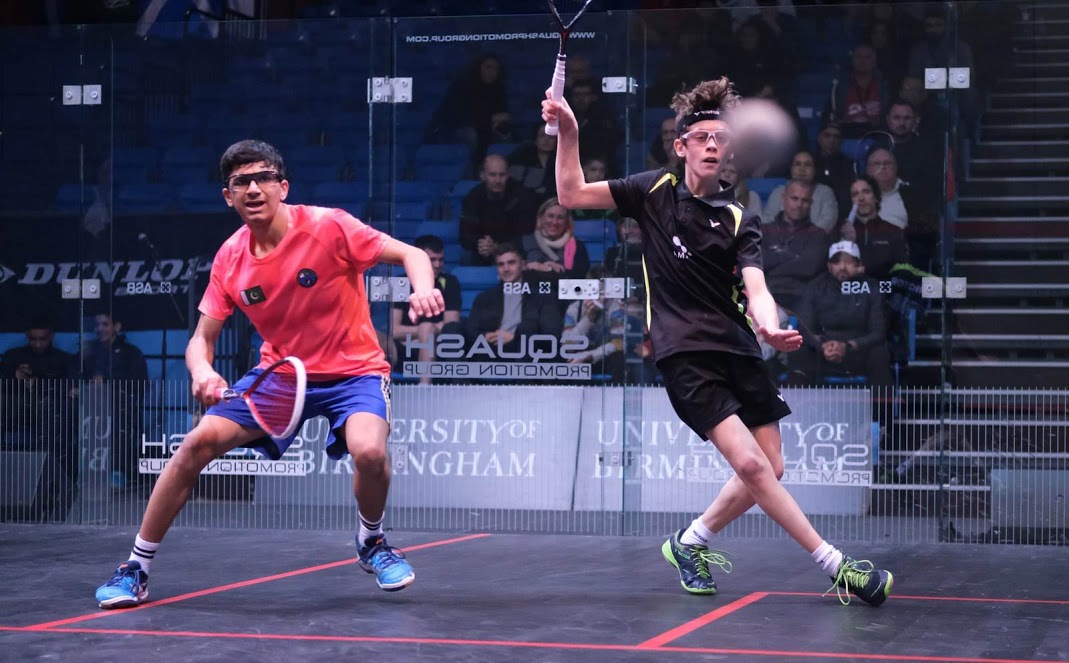 Another Englishman departed later in the boys under 15s when [3/4] Abdallah Eissa was out-hussled by Hong Kong’s [9/16] Jat Tse in a fractious match 4-11, 11-6, 11-6, 12-10 before second seed Muhammad Hamza Khan brought back memories of former Pakistani greats with a sweet straight-games victory over Egypt’s [9/16] Omar Azzam.

There were no such troubles for the top seeds in the BU19 – imposing Egyptian Moustafa El Sirty dwarfing England’s Simon Herbert in both stature and on the scoreboard in a 3-0 (11-4, 11-5, 11-5) triumph before countryman [2] Yahya Elnawasany sealed a last-eight spot by beating Pakistan’s [9/16] Haris Qasim in a fiendishly fast and skillful last match, both players changing shirts before the final game after 20 minutes of high-paced action. Meanwhile, the final match of the day saw Czech [5/8] Viktor Byrtus stop a comeback from England’s [9/16] Ben Smith 12-10 in the fourth.

Girls Under 19 top seed Jana Shiha of Egypt survived a first-game wobble against Dutch Junior Open champion [9/16] Fleur Maas to prevail 7-11, 11-7, 11-7, 11-3. Meanwhile, [2] Malaysian hope Aifa Azman made light work of England’s [9/16] Evie Coxon. Egypt’s [5/8] Malak Mostafa saved a clutch of match balls in the third before completing a comeback against Swiss [9/16] Ambre Allinckx that ensured the GU19 was the only draw with the top eight seeds intact.

Egypt saw five players in both the boys and girls under 13 draws through to the last eight, with boys top seed Mohamed Zakaria seeing off England’s [9/16] Jude Gibbins 3-0 while female counterpart Amina Orfi eased past American [9/16] Samantha Jaffe 3-0 to set up an all-Egypt quarter-final with [9/16] Jomana Shebab.

Girls under 13 second seed Janna Galal set up a last eight clash with France’s [5/8] Lauren Baltayan and boys second seed Youssef Salem will be on his guard against the unseeded Pakistani surprise package Abdullah Nawaz, who completed a second straight 3-0 win over a [17/32] opponent after his opening day shock win against USA’s [5/8] Christian Capella.

In the GU11, unseeded American Layla Gupta continued her dream run to the last eight where she will face Egyptian [3/4] Maya Mandour, while top seed Jana Mohamed of Egypt sailed into Saturday alongside [2] England’s Mariam Eissa.