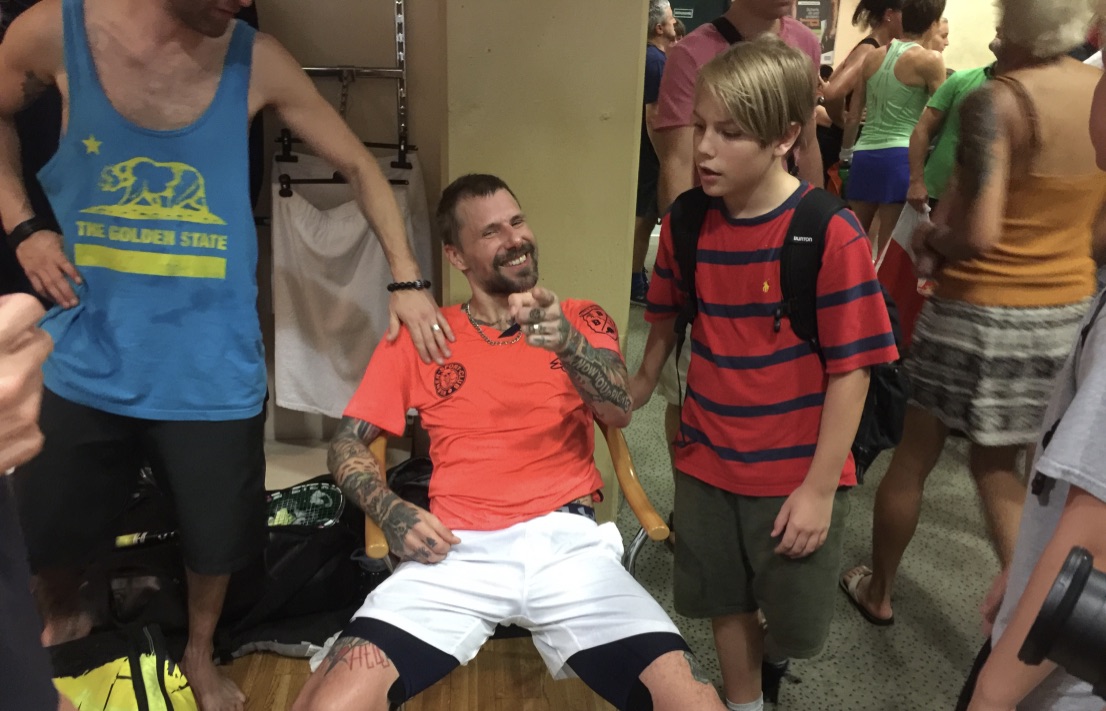 We need lower costs and a video review system, even for the Grand Masters
By GORDON KERR – Squash Mad Correspondent in Vienna

Without question the highlight of the 17 European Masters event finals (Men 35+ to 75+, women 35+ -to 70+ but no 65+ event) was the match between host nation Austria’s Clemens Wallishauser and England’s Mike Gregory.

Few of us had even heard of Wallishauser, but those who watched will remember his athleticism for a very long time. On a personal level I had not seen Mike for about ten years, since I last organised a semi-pro team in the Middlesex League; every time he played he served up treats.

What a spectacle was Saturday’s final. Mike Gregory is a rare talent, he possesses not only perfect timing, incredible skill, but also a unique imagination. Few in the crowd had any idea where the ball was going any of the time.

He produced at least four shots that I had never even previously imagined. Wallishauser, although clearly more agile, did not underestimate and covered the court with an agility that defied his age , 45+.

Outrageous shot of the match was played by Gregory mid way through the 4th game. The ball was close to the left hand wall but of poor length. Everything Gregory did shouted cross court – he physically swung across the court, racket, body, head. Yet he left his wrist late on the ball and popped it straight. Wallishauser was fooled. To enhance the effect Gregory even deliberately stumble-walked straight up the left wall, barely (but carefully) just missing the ball with his body as it floated back down the left-hand wall.

What a pity that this match, which was surely in any event going Wallishauser’s way, was ended early by a refereeing shocker with the Austrian leading 2–1 and by 6 points to 7 (Gregory serving) in the fourth. Trapped in the front right corner Wallishauser stumbled, off balance after an amazing retrieval into Gregory’s arms. Mike, his racket almost touching the ball was unable to swing. No let.

Not one to hide behind my pen I approached the referee straight afterwards and explained my and the crowd’s disappointment. She is a charming, noble lady whom I have met many times before, mainly in Scotland. It was clear that she believed Gregory could not have played the ball – too far in front. Squash needs a cricket style DRS (Decision Review System) if Masters Squash is to survive and thrive.

To report on all 15 final events would be a mammoth task, so I highlight only the most noteworthy. The day opened with the mens +75 final. Ken Reid of Scotland defeated Bertil Walli of Finland with some great retrieving and well timed floating shots into the rear corners.

In the 70+ event Howard Cherlin was on top form. With near perfect touch and spin control he floated and dropped the ball to all four corners and Scotland’s Ian Ross had to settle for second place.

Once again a refereeing intervention spoiled the match. Perfectly poised at one game apiece and 9-9 in the third, everybody knew that the next couple of points were important.

Having forced Barwise, in trouble, to boast from the back left hander Cowley played a trickle boast in the front right. Not his best but it wrong footed Barwise who clattered into Cowley with his racket prone in front of him.

The ball was far from dead, bouncing rather high across the front wall but going in the opposite direction. I suppose a purist would agree that the decision was either stroke or no let, but what a generous stroke it seemed.

The next point produced another soft decision and the game was over; the match effectively dead. No disrespect to Barwise, who played superbly and would probably have won anyway, but what a shame that refereeing decisions played a material part in the most crucial moments.

In the 55+ final Sweden’s Jonas Ulvsback was again beaten by countrymate Fredrik Johnson.

The stand out performance in the ladies’ matches came from Andrea Santamaria, who defeated Germany’s star Masters player Simone Korell comprehensively in the 50+.

Andrea is a bit of a female Clark Kent. I wonder how many ordinary burgers of Pontefract have bumped into her doing their weekly shop in Morrison’s supermarket and thought nothing of her? I can imagine that, not being particularly tall, when dressed in ordinary clothes and a warm jacket, they would never suspect that this lady is a supreme athlete.

But once the tracksuit comes off and she enters the court wearing her squash gear and her game face, Andrea is transformed into a lioness. Muscular definition in her shoulders was visible even from the back of the crowd as Andrea hammer-volleyed any loose balls either deep into the corners or cross court into the nicks. Korell had no chance.

Hats off to Hungarian/ English lady Reka Gay who came second in the ladies 35+ event; but it has to be said that the standard of play was not earth-shattering. In truth, the standard across the draw is only genuinely elite in the Men’s events in the age ranges 40+ to 60.

There are indeed a number of world-class standard ladies, such as Field, Hume, Santa Maria, Campion and Akin, regularly competing in these events, but too few opponents of quality to really endorse the event as a true championship of all European contenders.

Why so few players outside of these few men’s events? I have personally enjoyed participating in six world and European masters in the last ten years and my worry is that, owing to a combination of trends, participation is reducing. Chief among them is cost. We want these events to attract the best players from across Europe.

However this year’s entry fee, 150 euros, is about one third of the average monthly wage for Bulgarians, and double the monthly average wage of Ukrainians. No wonder so many titles were won by UK based players; many Eastern Europeans were simply priced out. But will the wealthier Brits, Scandinavians, Dutch and Germans commit to future events if other less attractive features are to be repeated?

This year’s location, Club Danube, is a hospitable venue with 15 courts but ten of them are squeezed into the back of the venue with such a narrow access corridor that refereeing is difficult. The temperature was blisteringly hot and the courts grubby and dark.

In Cologne in 2010 the players’ dinner and awards was held in a magnificent venue, a grand hall that truly fitted the occasion. In Vienna we were asked for 50 euros for an ‘all you can’ eat buffet in a sweltering venue which, although covered, was basically a cheap restaurant in a theme park reminiscent of Southend.

I have huge admiration for Pavel Sladecek and the team, but they need support from those running the sport. The entry fee should be cut to 20 euros or less, subject to entrants demonstrating that they play to at least amateur “A” grade in their home country. Funding should be solicited from European pots. Plenty are available.

Squash is the most magnificent advertisement for human health and fitness, for delaying the onset of old age. I have for years been unimpressed with those administering the sport both in England and at the ESF. Yet again, this year they did nothing to help showcase the sport.