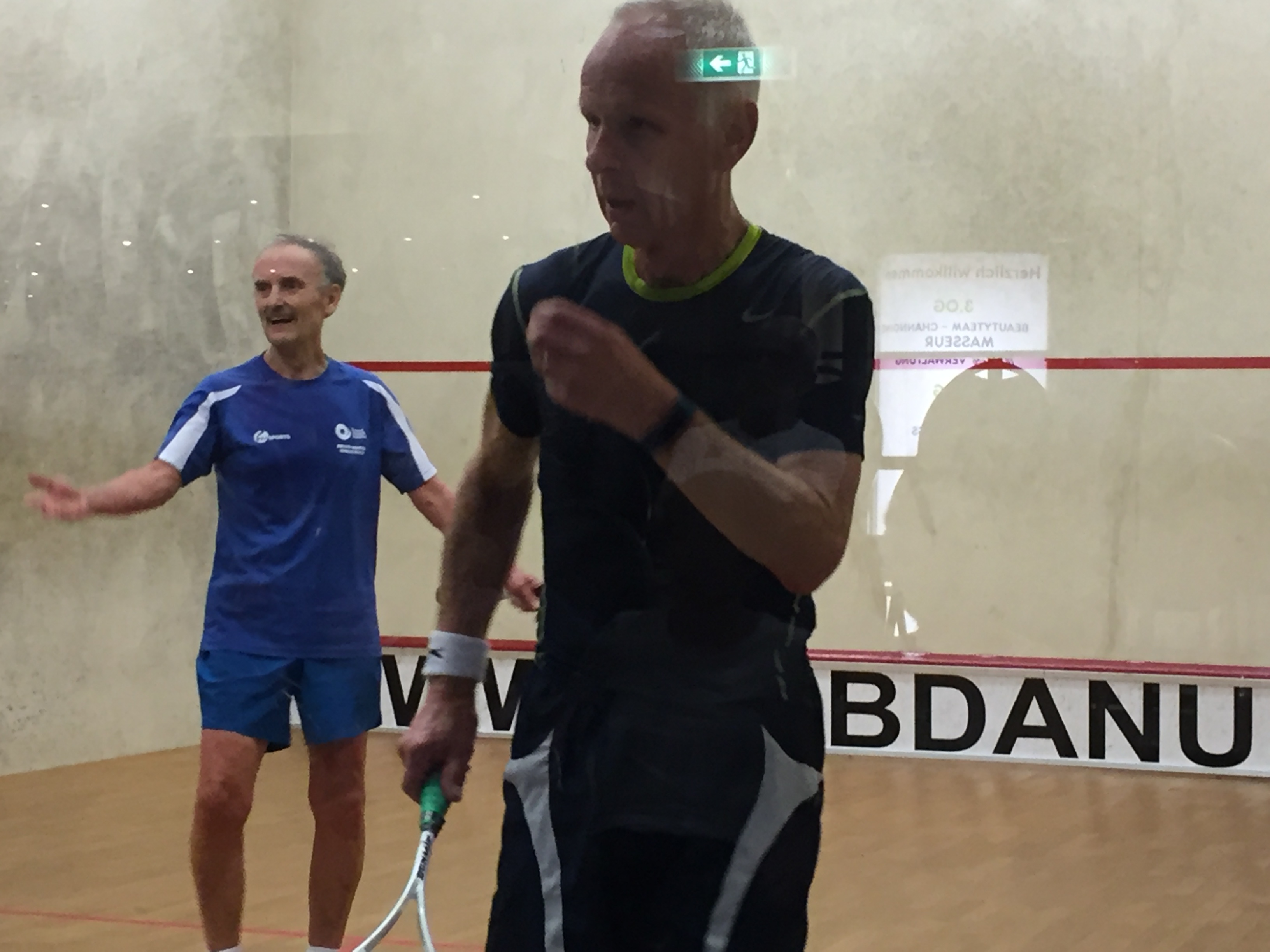 The European Masters has brought a phenomenal array of talent across many generations to the wonderful city of Vienna.

By Friday, only the genuine elite remained in the main draws, battling for the trophies. When reflecting on the matches I witnessed yesterday three themes stand out: extreme athleticism relative to age; strict refereeing by the professional officials; and the fine line between competitiveness and respect for one’s opponent.

All three themes were prevalent during the matches between my Scots countrymate Ian Ross and England’s Larry Grover, and between Howard Cherlin and Barry Featherstone, both also English.

Both matches went to five and all four athletes are a credit to their generation and the sport, both for their fitness and sportsmanship. I was surprised but not shocked by the application of what I would term PSA refereeing standards to men in their 70s.

I have watched Ian play many times, and to see him threatened with the disciplinary procedure for crashing into his opponent when innocently attempting to demonstrate he could have reached a back corner ball at full stretch was so wonderful a tear welled in my eye. Ross will meet Cherlin in the final.

In the 65+ final today I fear my Middlesex team-mate Stuart Hardy will have his work cut out against the age defying Stephen Johnson. Hardy did well to beat 2013 60+ champion Nick Drysdale. But the athleticism on display between Johnson (SJ) – who had survived a gruelling QF against another great athlete, Welshman David Wright the previous day – and Geoff Redfern was on a different plane. Geoff must consider himself unlucky with the seedings to be in the same half of the draw as SJ.

These four gladiators were succeeded on the two showcourts by the 60+ protagonists. All were English. The victors, Allen Barwise from Wigan and Mark Cowley, also a Middlesex team-mate, both launched seemingly blitzkrieg attacks on Phil Wakefield and Dermot Hurford respectively.

Wakefield adapted quickly after losing the first and went 2-1 up, but could not get across the line as Barwise upped the pace in the fifth. The referee laid down the law at the very start of the Cowley/ Hurford match; four of the first five rallies invited decisions which surely in many other competitions would have been adjudged lets, but each one here was either ‘stroke’ or ‘no let’.

FWIW I approved; the outcome seemed fair to both players and it certainly made them try and play every ball that was not an obvious stroke. Further, if the decision rules are applied in this fashion at pro level then why not with elite amateurs?

In the women’s 60+ (how ungallant do I feel defying my upbringing to cite the ages of these fine ladies), Karen Hume managed to beat Malmo 2015 winner Jill Campion. In the +55 event Mandy Akin, yet another very fit, talented and ageless female athlete, reached another final.

Granted, the standard in these and other ladies’ events is very high but what a shame that there are so few entries that most ladies’ events are in round robin rather than knockout format. But the trade-off is that in round robin a player can survive a defeat, and so I moved to the back courts to watch other matches.

Theresa Krassnigg from Graz in Austria and Germany’s Stefanie Leiber, both tall, strong athletes, fought a tremendous battle despite neither having much chance of the +40 title. Your humble correspondent had the honour of marking this match which would surely make great TV should SKY Sports Germany ever tire of showing endless reruns of football and tennis.

Both ladies sprinted and stretched into all four corners, giving no quarter. I learned a new German adjective to describe their competitive attitudes, ‘verbissen’. (No English translation does this term justice). Krassnigg prevailed.

Geographically and geopolitically, Hungary has of course been historically very close to event host nation Austria. The Dual Monarchy, under the House of Habsburg, ruled the bulk of central and south eastern Europe from 1867 until 1918 when it lost the Great War which it had started by declaring war on Serbia.

Now, some 30 odd years after the dismantling of the Berlin Wall, it is gratifying to see high class squash growing both in Hungary and in much of the former Austro-Hungarian sphere of control.

Impressive squash was played yesterday by Hungarian natives Edina Szombali and Reka Gay. In the men’s 55+ event James Hyatt, a former Middlesex and Surrey champion, who has moved to Budapest where he coaches and inspires the development of squash, put up a magnificent challenge to perhaps the stand-out star of the entire event, Sweden’s Fredrik Johnson.

Again I wondered why no TV cameras were present. Not only was the standard of skill, professionalism and fitness simply ridiculously high, but both players’ personalities bring something extra to the event.

Hyatt’s facial expressions, particularly after making an error, justify a photo montage of its own. Johnson’s quirks are extreme.

At the start of the match he does not enter the court, he runs at it three times. Twice he stops and recoils, on the third occasion he leaps into the arena as if to declare his ownership thereof. It is akin to the New Zealand rugby team’s traditional Maori war dance or Haka, which I think is intended to put his opponent off his stride; it is truly a little dance peculiar to Fredrik Johnson (FJ) the interruption of which would be considered impolite. Maybe Fredy should have his own Abba theme tune as his walk-on music.

Later today FJ will face for the umpteenth time his countrymate Jonas Ulvsback, and many will stake their house on another FJ win. Dare I risk his and their ire by closing with an appeal?

Mr Johnson you are a brilliant squash player but please, when the referee calls ‘play’ at the start of each game, serve promptly. Bouncing the ball for 20 odd seconds before serving blurs the line between owning the proceedings and failing to pay your opponent the respect he deserves.

Such is the cornucopia of great squash that I regret missing too much. More Middlesex Squash League’s rich talent shone through. Mike Gregory made today’s final of the +45 event having beaten Ireland’s Rob Staunton.

In the late afternoon I managed to catch Mick Biggs in the +40s. Mick had ousted Croatia’s Domagog Spoljar in a marathon on Thursday. He could not overcome France’s national number 15 Jerome Serusier, but the match was another treat to behold.

Here’s to a wonderful finals day.