NICK MATTHEW’S coach has revealed to SquashMad.com details of his meticulous masterplan to bring Ramy Ashour’s world domination to an end.

Matthew, who admitted in his autobiography to being “obsessed” with beating the Egyptian world No.1, even went as far as changing his grip in the summer in a bid to halt Ashour’s 17-month run of PSA Tour victories. 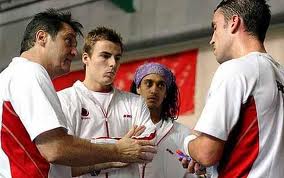 Matthew and coach David Pearson’s tactics have had to be stashed away for now due to Ashour’s hamstring injury, sustained in the World Open semi-final earlier this month.

But the insight into Matthew’s relationship with ‘DP’ still makes interesting reading for squash fans captivated by Matthew’s brilliant World title win and his new book, Sweating Blood: My Life in Squash.

Pearson told Squash Mad: “With Ramy dominating for so long, we just thought, ‘What can we do to at least have a pop at him?’ Nick perhaps wasn’t going to beat him all the time, but if we could just get the odd win here and there.

“We spent a lot of time making the angle different on his racket head and not cocking his wrist at the end of the swing, which would cause that effect.

“There’s a lot of trust between us. There has to be when you say to somebody aged 32, who’s already won two world titles, that they’ve got to change their grip! There was no great protest from him. He just said, ‘OK, DP, I’ll do it’.”

Pearson (pictured right) has also worked on Matthew playing a different type of drop shot, making tightness to the side wall the first priority, rather than the convention of playing the ball as high up the court as possible.

“When Nick goes for a volley drop or a straight drop from around that middle area where he’s very strong, against Ramy we’ve concentrated on trying to make it an old ‘working drop’, so it’s further back in the court and very tight to the wall.

“That way, Ramy can’t use his speed to get in and counter him. It limits his attacking options. It brings him further back and as long as it’s tight, he has to push it up, rather than attack it at pace.

“It worked really well at the 2012 British Open final so we’ve really stuck to that tactic. Ramy is such a good player when he’s ‘on’ and he plays so randomly that it’s very difficult to formulate a plan.”

Pearson has also instructed another of his protégés, British No.1 Laura Massaro, to change her grip this year, and revealed that he had nagged Peter Nicol to change his grip too through the latter part of his glittering career. Bizarrely, Nicol waited until four months before the end of his professional career before finally doing so!

Pearson, who is based in Harrogate, played over 40 times for England and is a former English No.2. But it is as a coach that his success has been most remarkable. He has worked with virtually all the top English players, either as a personal coach or as national coach between 1995-2010.

It is with Matthew that he has perhaps the longest and closest bond, dating back to when the three-time world champion lodged at his and his wife Jo’s house as an up-and-coming teenager.

I’m never usually animated, but before the fifth, I started swearing at him. I used the F word quite a lot. I ordered him, ‘You do not hit any ball to the front of the court!

“In his early years his swing was so bad it took probably five years to actually get it to something approaching what it is now,” reflects Pearson.

“That was actually a really fresh, interesting five years. The Lottery programme was in its infancy, and the start of the World Class Performance Programme was very exciting.

“When Nick first came to me his sense of humour was pretty average. He never knew how to laugh at himself. I would just rip into him in the early days, in a nice way. I’d try to get him to understand that life is about laughing at yourself and smiling if you can’t do things right.

“We made the sessions a lot of fun. In the early years in particular that’s why it worked between us. I’d cajole him with my sense of humour, and he’d develop one as we went along!”

I could see that Greg was totally knackered. It was obvious that Greg could not bear that movement to the back of the court. I was being quite aggressive with Nick. His eyes widened. It’s the first time for many a year I’ve given him a bollocking in between games.

Back to the present, and there was no sign of Pearson’s trademark at the World Championship in Manchester, when Gregory Gaultier stormed back from two games down to send their pulsating final into a decider.

Matthew afterwards told the BBC that it was only time in his entire career he had listened to what his coach had to say between games. Pearson can now reveal why.

“I’m never usually animated, but before the fifth, I started swearing at him. I used the F word quite a lot. I ordered him, ‘You do not hit any ball to the front of the court!’

“I could see that Greg was totally knackered. It was obvious that Greg could not bear that movement to the back of the court. “I was being quite aggressive with Nick. His eyes widened. It’s the first time for many a year I’ve given him a bollocking in between games.

“Fortunately it worked. The first five rallies, he did exactly what was required. By that time, Greg was virtually dead.
“That was quite a pivotal moment. If Nick had carried on going short too early and opening up the court a little bit, Greg could’ve hung on and maybe pressurised him. That advice was a big moment in him becoming world champion for a third time.”

The obvious question now for Matthew, a player well into his 34th year, is how much longer can he go on? “He might have another World Open win left in him. You wouldn’t put it past him,” asserts Pearson.

“Nick’s body is so young still. He’s still as keen as mustard to learn new things. There’s no staleness there. As long as his body holds up, he could have another couple of years left.”

One suspects Matthew will want to hang around for however long it takes to put his and Pearson’s Ramy masterplan into action. 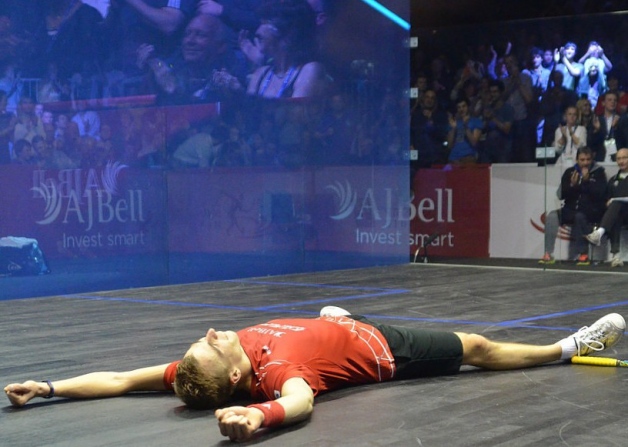 Mike Dale is a journalist and lifelong squash player based in Leeds. His career began at the Press Association and he now works on Orange's news, film and sport portals, while freelancing for several sport magazines and, most importantly, squashmad.com