Guest Contributor December 24, 2013 No Comments on Exclusive interview: Nick Matthew pulls no punches as he reviews a memorable 2013 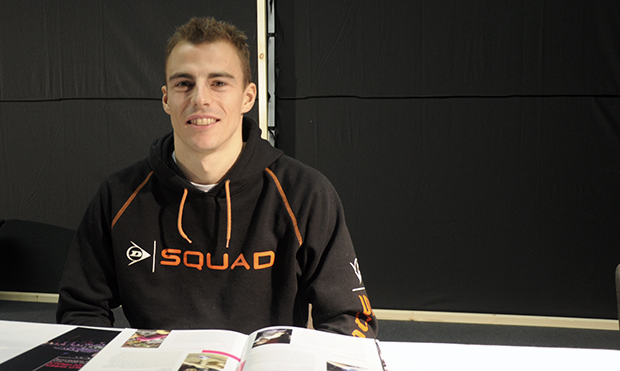 Less than six months ago, Nick Matthew was sitting at home contemplating his future after falling out of the love with the game. A final loss at the World Series Finals, punctuated by semi-final losses at the Canary Wharf Squash Classic and British Open, left many to predict that the 33-year-old was heading on a downward spiral.

But after taking some time out from the sport and marrying GB cycling team physiologist Esme in the summer, Matthew made his much-anticipated return at the US Open in October, where he finished runner-up to Gregory Gaultier.

Two months later, the England number one was left celebrating a third World title, maiden Hong Kong Open crown and a return to the world number one spot. Some feat, then, for a player who had gone almost 14 months without winning a PSA Tour title.

And with the Sheffield-based player enjoying a well-earned rest after his recent heroics, the five-time British National champion spoke exclusively to Squash Mad to review a roller-coaster year on Tour, while also addressing a number of controversial issues that are plaguing the sport.

1. First of all, congratulations on your new world number one ranking. You have had to endure almost two years watching first James Willstrop and then Ramy Ashour dominate top spot. How pleasing is it to finally reclaim the position again?

It’s amazingly pleasing. To be honest, it hasn’t really sunk in yet and until the rankings actually come out, I will take it with a pinch of salt because I’m wary that their calculations might be wrong [laughs]. But the goal this season was to challenge for the World Championship and to get world number one wasn’t even in my eye line so it’s a real bonus.

2. You have now won three World titles – which one holds greatest satisfaction for you?

We all have short memories and the most recent one probably stands out because it was achieved in front of a home crowd and was also live on the BBC. But there was a massive difference between winning my first title in Saudi [Arabia] and the one in Manchester. The elation was probably very similar but I actually went back to my hotel room in Saudi alone, whereas in Manchester I was able to celebrate with my friends and family so there was a real contrast of emotions between the two. 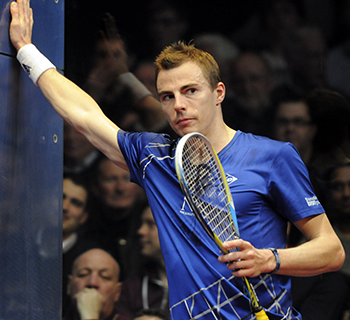 3. Looking back now, how pleased are you with your decision to reduce your tournament schedule for 2013?

In hindsight it was a great decision. You’re never totally sure at the time whether you are making the right decision but I guess at 33, I know my body and mind fairly well. Had I lost in the first round of the US Open for example, the World Championships might have panned out differently. So while it was a risk, it was a calculated one based on people ‘in the know’.

4. You played Gregory Gaultier and Borja Golan at the Hong Kong Open, both of whom were involved in a controversial match at the China Open. What were you thoughts on the amount of strokes and let decisions that plagued their encounter?

I only saw the last part of the last game because I was playing later that evening so it’s obviously hard to comment without seeing the whole match. But I think a lot of things have been made about refereeing decisions recently and I would like to see a lot more strokes given and a lot more no lets to encourage people to play the ball. The less lets we have, the better. There are always going to be contentious matches and I think the James [Willstrop] and Mohamed Elshorbagy match is another example. Overall, the standard of refereeing needs to improve but then again, so does the standard of play. It’s definitely got to be a two-way street.

5. The WSA Tour has suffered a few blows recently, none more so than their 2013 World Championship being cancelled. Do you think the sport could benefit from merging the PSA and WSA together?

I think it would be a great decision. A lot of the girls are in favour, while some of them are a little wary about the WSA possibly getting swallowed up by the PSA which is the larger body. But there have been a lot of positives for the WSA and the US Open was massive because of the equal prize money. Going forward however, I think squash could make a big statement if the two Tours were aligned and moving forward on the same page. 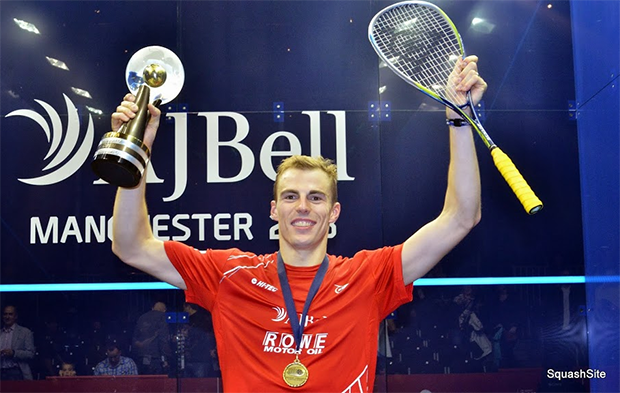 6. You tied the knot earlier in the year, how is married life treating you?

I’m struggling to be able to spend some time with my wife. Jo, the wife of my coach DP [David Pearson], sent me a card after winning the Worlds and said ‘it was the second best thing I had done this year’ and then at the bottom it said ‘number one was marrying Esme in case you didn’t know’. I think that perspective has been crucial to my year really and has really helped with my performances.

7. You have the opportunity to add to your two gold medals at the Commonwealth Games in Glasgow next year. Do you prefer the team element of representing your country or competing as an individual?

That’s a tough question and without meaning to cop out of the answer, my preference is probably competing individually for my country. I think an event like the Commonwealth Games is probably my favourite to compete in but any time I pull on an England shirt or compete in a World Tour event, I’m always happy to be representing my country and myself at all times.

I actually read his [James Willstrop’s] book on the last day of my honeymoon so make of that what you will. But I thought it was really good – not quite as good as mine but still very good!

8. Your book ‘Sweating Blood: My Life in Squash’ has been a resounding success since it was published in November. How did you find juggling tournaments with writing the book?

It’s certainly been a challenge. I’ve had to learn to prioritise my time. I tried to setup an academy last year which is there and ready to go but I have had to put that on the back-burner. At the start of the year, I got a bit bogged down with planning my wedding, moving house, doing my academy and writing my book. There was so much going on that my squash suffered and I had to sacrifice a few things to really focus on my book. That was the one I really concentrated on outside of squash and I’m really pleased that the book’s been successful. 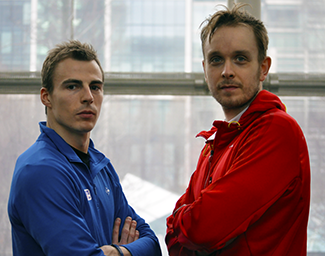 9. Your rivalry with James Willstrop (pictured right) now translates onto the bookshelves as well – has James read your book and likewise, have you read his?

I can’t tell you whether he’s read mine but I have read his. I actually read his book [Shot and a Ghost: a year in the brutal world of professional squash] on the last day of my honeymoon so make of that what you will. But I thought it was really good – not quite as good as mine but still very good!

10. We’ve heard suggestions that you are quite interested in journalism so when you eventually decide to call it a day, is a stint working for Squash Mad on the cards?

I’m sure one or two articles will make their way onto Squash Mad but in the meantime, I will focus on my squash and then phase in my post-career as and when really. I feel like I’ve still got a couple more years left to compete on Tour.

11. Ending on a Christmas theme, the compression stockings Gregory Gaultier and Laurens Jan Anjema wear have caught the eye over the past year. Have you considered sporting a similar look as well?

Never! It’s not my style really and unless I had thought of it first, I would feel like I’ve copied someone. It’s better to innovate rather than follow the crowd. I think they are always something that will be associated with [Thierry] Lincou and Greg anyway.

Nick Matthew was talking to Squash Mad Reporter Michael Catling. Matthew will return to competitive action at the Tournament of Champions next month. To view our preview and a full men’s and women’s draw, click here.