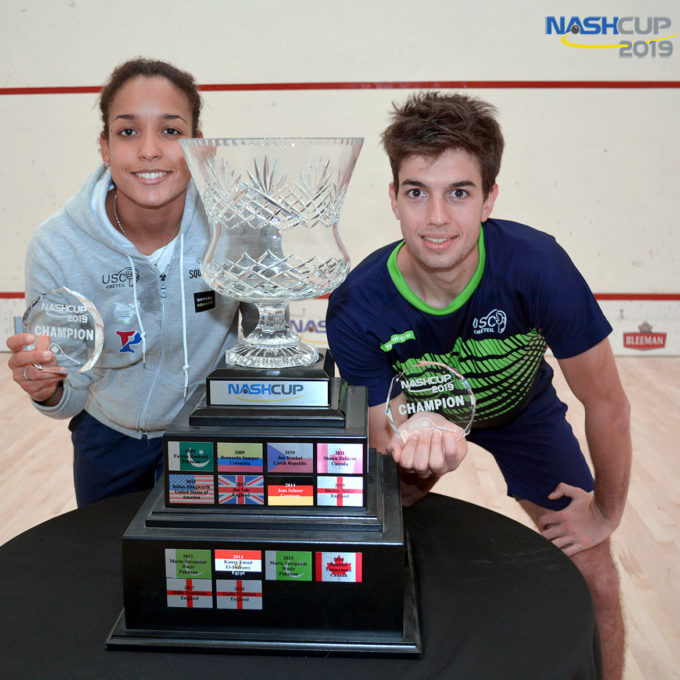 Melissa Alves and Auguste Dussourd made it a French double in the finals of the Nash Cup hosted by Jay Nash at the London Squash and Fitness Club in Ontario, Canada.

Women’s top seed Alves, ranked 45 in the world, ended the run of fine form shown by England’s No.2 seed Jasmine Hutton (world No.54) with a solid performance that delivered victory in straight games with a scoreline of 11-9, 11-2, 11-6 taking just 29 minutes to record.

Alves and Hutton shared an even start to the opening game and they traded points until it reached 9-9. Hutton then hit a backhand volley drop into the tin, and Alves won a long rally to take the game.

Alves quickly built a 4-1 lead in the second as Hutton’s length on the left wall became loose. Alves continued to dominate and powered through the game 11-2.

Hutton improved her control at the start of the third and won the first two points. But Alves regained her form to lead 5-2. Her combination of outstanding retrieval and stunning winners was a potent mix and although Hutton never gave up the battle, Alves dominated to close out the match and become the Nash Cup 2019 champion.

Malhotra and Dussourd, ranked 63 and 68 in the world, shared the opening exchanges in the men’s final but from 5-5 the Indian attacked with power and precision to win it 11-6.

Dussourd came out for the second with more purpose and slotted a superb nick early on to warn Malhotra of his attacking intentions. Malhotra was forced to undertake a huge workload chasing the ball around court as Dussourd levelled things up.

He maintained that form in the third to jump out to a 7-0 lead. After a few recovery points by Malhotra, Dussourd fell heavily but he regained cntrol to win 11-4 and move ahead by two games to one.

Dussourd tripped awkwardly again in the fourth game and was further frustrated by some refereeing calls that went against him as Malhotra regained the ascendancy to win 11-5 to level the match at 2-2.

Malhotra was unable to summon up much of a physical challenge in the fifth as Dussourd raced into a 6-2 lead. A few more tins by Malhotra stretched the Frenchman’s lead to 9-2. Malhotra was against the wall. He put together a few great rallies, managed some desperate retrieving and pulled the match to 10-5. In the end, after a spectacular rally, Dussourd took the winning point to claim the trophy.

Viva la France… that will be two French flags on the Nash Cup after tonight.