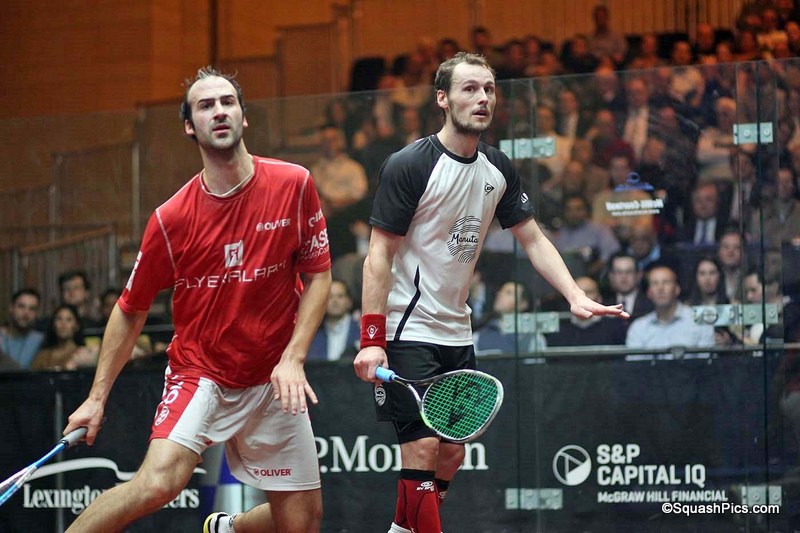 Top seed Gregory Gaultier moved one step closer to overtaking Nick Matthew at the top of the world rankings after battling past unseeded German Simon Rosner in straight games at the Tournament of Champions quarter-final in New York.

Gaultier, who will move to the top of the rankings with victory this week following Matthew’s shock defeat yesterday, saved two game balls in the opening game before romping to a 12-10, 11-6, 11-7 victory in just under an hour.

“It’s always good to win and Simon has been improving a lot recently,” said Gaultier.

“The past few months especially, since he won in Kuwait, has been a big confidence boost for him and he has had a few big wins this week and it highlights how tough the Tour is at the moment, so I’m glad to still be able to win these matches.

“I still want to be the best in the world and I’m happy when I’m still able to beat these young guys. “I’m going to recover now and take tomorrow as another day.

I will go in with a game plan and I will try and stick to it. I have been working a lot on my mental side recently and it seems to be working and I’m quite happy with the way I played so I’m looking forward to the semi-final tomorrow,” added the 2013 runner-up.

The French number one will face world number four Mohamed Elshorbagy for a place in Friday’s final, after the Egyptian recovered from a game down to beat eighth seed Daryl Selby at the Grand Central Station.

Gaultier and Elshorbagy last met in the World Championship semi-final in November and the 31-year-old from Epinal will be confident of repeating his four game victory after failing to drop a game this week.

Rosner came closest to ending that streak in an 18 minute opening game and will be left to rue squandering two game balls as Gaultier reeled off four consecutive points to edge the tiebreak 12-10. 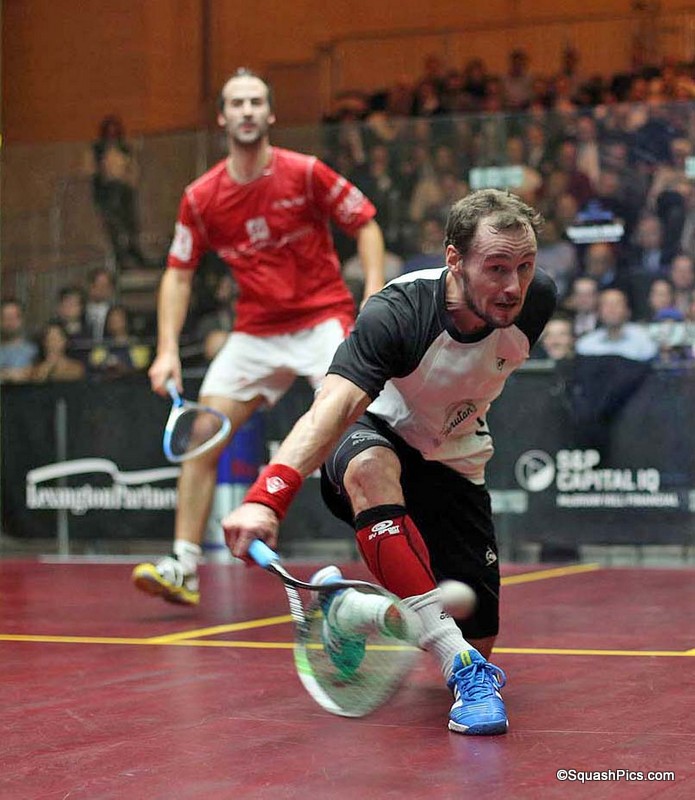 Much owed to Gaultier’s battling qualities, rather than Rosner’s inefficiency, as the Frenchman recovered from an outrageous ‘front split’ position mid-rally to unleash a devastating counter drop to tie the scores at ten apiece.

Gaultier, who was appearing in his 34th successive PSA World Series quarter-final, was barely troubled thereafter as the world number 13 struggled to recapture the form which ended former world number one Karim Darwish’s challenge in the second round.

But despite racing into a 10-4 lead in the final game, Gaultier stuttered over the line as three successive points for Rosner, punctuated by six lets, left the Frenchman gesticulating to the referee on several occasions.

A contentious backhand drop which could have been pulled up for another let eventually sealed victory for the 25-time PSA Tour winner who remains on course for a second Tournament of Champions title following his 2009 success.

In the earlier semi-final (pictured above), third seed Elshorbagy fought back from a game down to defeat Selby 8-11, 11-7, 11-5, 11-8 and progress past the quarter-final stage of the $115,000 event for the first time in four appearances.

In a match dominated by unforced errors and punishing rallies in equal measure, Elshorbagy secured his fourth consecutive victory over the world number 10 to remain on course for a third Tour final since November.

Meanwhile, Selby will travel to Scotland to defend his Edinburgh Open trophy in just two days time, although in the aftermath of a strong performance in New York, any lingering disappointment over two successive first round exits in December appears a distant memory.

The omens appeared ominous for the 31-year-old Englishman heading into the match, with Selby’s last victory over Elshorbagy coming at the Canary Wharf Classic nearly seven years ago.

But despite Elshorbagy’s two title winning feats in November culminating in a rise to a career high fourth in the world rankings, Selby would have been buoyed after watching the mercurial Egyptian struggle past fellow compatriot Tarek Momen in the last 16.

Indeed, there was noticeable sluggishness in the early stages of the opening game as a litany of backhand errors were gratefully accepted by the Essex-based Selby.

Elshorbagy, though, has lost just once in 16 matches and he finally began to endorse his number three seeding as he raced into an 8-4 lead in the corresponding game.

A disjointed ending to the game overshadowed an otherwise dominant response from the Egyptian as a trademark forehand drop clinched a comfortable 11-7 victory in just 10 minutes.

With Selby’s error count rising and Elshorbagy’s winner count following suit, the 23-year-old from Alexandria marched into another 8-4 lead. A breathtaking flick drop sealed the third game at the first time of asking and left Selby with the unenviable task of overturning a 2-1 deficit.

And despite leading 5-3 and 8-7 in the fourth game, Elshorbagy fought back amid a barrage of brutal hitting which left Selby keeled over and trailing 9-7. A forehand smash nick by Selby was offset by a stroke decision before Elshorbagy clinched victory with a vintage forehand kill.

“Daryl played really well and put me under so much pressure,” admitted Elshorbagy in his post-match interview. “I think that was the best he has ever played against me and I’m just happy that I was able to push through.

“I have never played in a semi-final here before but I hope that I can win in the semi-finals because it would mean a lot to me to make it through to the final.

“It would be very special if I could play Amr Shabana in the final because that would be a dream come true for me – to play my idol in the final of a World Series event so hopefully we can both win tomorrow.” 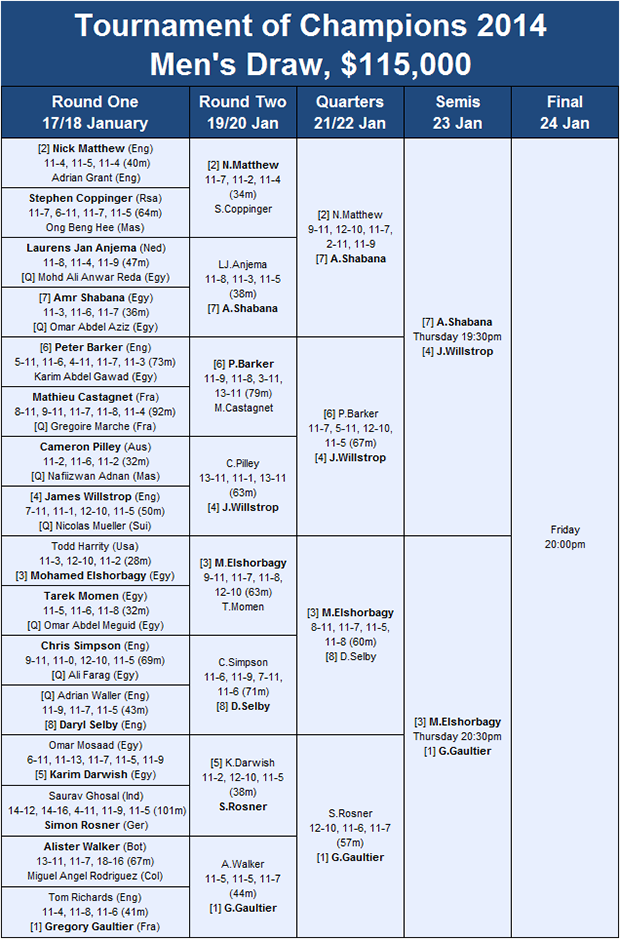