Guest Contributor March 15, 2020 No Comments on Gina Kennedy and Marwan Tarek make it a Harvard double in College Individual finals 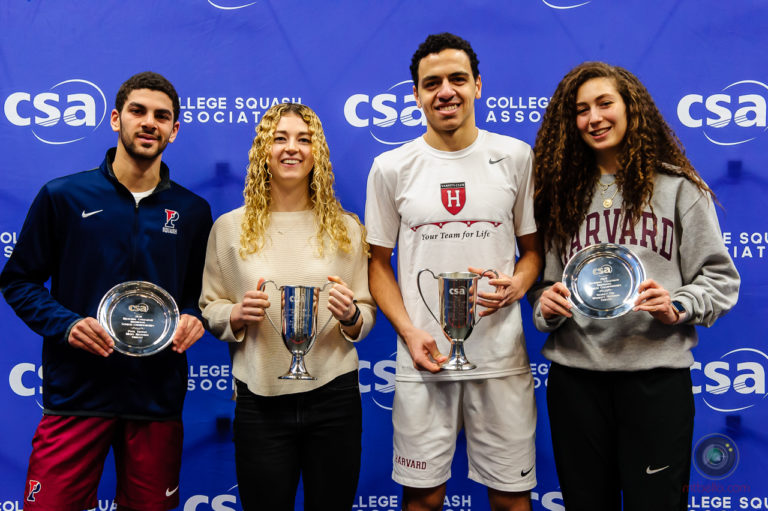 Kennedy, a senior and four-time finalist, captured her third Ramsay Cup, going out on top as one of the elites of college squash. Sophomore Tarek earned his first Pool Trophy in his first finals appearance after a 14-1 record during the season.

Kennedy, the top seed in the Ramasy Cup draw, had been phenomenal all year, dropping only four individual games during the season on her way to a fourth team championship and the Betty Richey Award.

Despite it being her fourth Ramsay final in four years, Kennedy’s opponent, team-mate Hana Moataz, looked more comfortable as the match began.

Moataz jumped out to an early lead, but Kennedy gradually settled in, pushing the first game to extra points. Kennedy ultimately prevailed 13-11 in the first, and then carried the momentum from that comeback into the second and third games.

It was clear that Kennedy figured out her plan to attack Moataz midway through the first game because she rattled off two consecutive quick game wins to clinch the third Ramsay Cup of her career. 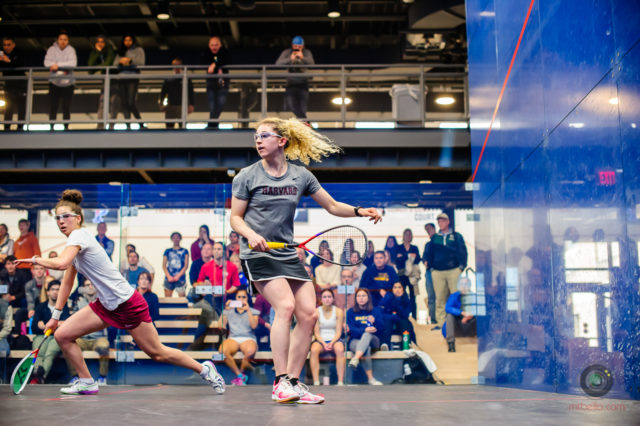 Gina Kenedy (right) and Hana Moataz in the women’s final

For as one-sided as the women’s final ended up being, the men’s Pool Trophy final was just as even all the way through. During the first three games, the third seed from Harvard, Tarek, and Penn’s Aly Abou El Einen stayed within only a couple points of each other.

Abou El Einen earned wins in the first and third games, 11-9 and 12-10, while Tarek grabbed an extra-point win in the second, and it felt like anyone’s game heading into the fourth.

The Penn player jumped out to a quick lead in the fourth game – one of the biggest of the match – but Tarek changed his tactics, shortening the points and ramping up his physicality.

An injury break and a few errors by Abou El Einen seemingly revitalized the Crimson player, spurring him into the game lead and then tying the match at 2-2. Both players were physically spent as the fifth game began, which led to shorter points, errors in the tin, and some looser balls away from the walls.

Tarek got the better of these exchanges, extending a lead he would not relinquish. As the final ball met the tin, a victorious and exhausted Tarek collapsed to his knees on court, celebrating his maiden college squash championship. 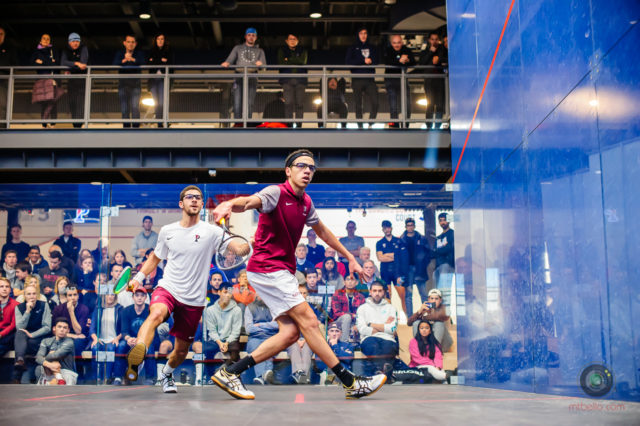 The high level of play and competitiveness on display was fantastic in all of the finals, including seven of the eight matches extending beyond three games.

On the women’s side, Trinity’s Vanessa Raj captured her third Holleran Cup win and Harvard’s Eleonore Evans earned her second in as many years. Evans’s teammate Hannah Craig and Princeton rookie Caroline Spahr won their first Holleran championships each.

For the men in the Molloy Divisions, the top three teams from the Men’s Team Championships exerted their dominance with championship wins on Sunday. Trinity captured two titles through first-time winners Andrew Lee and Aly Eltokhy. Harvard’s George Crowne made a dominant run in his division to his first title over Penn’s Dillon Huang, but Yash Bhargava of Penn avenged his team-mate’s loss with a Molloy title of his own.