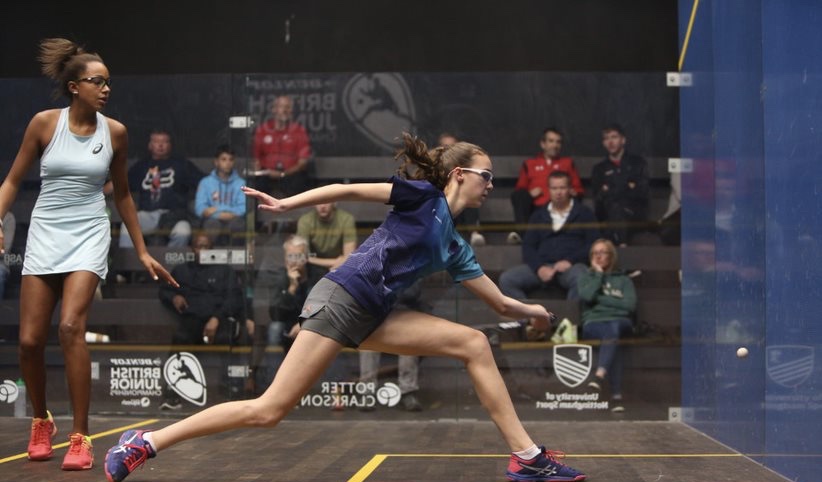 Alice Green took a step closer to securing her third British Junior Championship title as the Essex player stormed into the final of the Girls Under-19 tournament, where she will face Scotland’s Georgia Adderley.

The showdown will be a repeat of last year’s Under-17 final, which saw Adderley victorious.

Top seed Green defeated [3/4] seed Eve Coxon in straight games (11-4 11-8 11-9) on the second day of the championships in Nottingham, while Adderley overcame a stern challenge from [3/4] Katie Wells (Lincs).

“I’m really pleased to be through to the final against Georgia tomorrow,” said Green, speaking after her match.

“It was my first time playing on this glass court but I felt comfortable and in control.

“I’m looking forward to the final and I would be very proud to become British Champion.”

Anderson will be up against top seed and favourite Nick Wall (Yorks), after the Sheffield hitter saw off Alasdair Prott to earn revenge over losing to the talented Scottish player in what was a repeat of last year’s BU19 final.

“It’s always tough against Jared,” said Anderson, who was pleased with his composure on the court.

“He is a very solid player physically and mentally, and is hard to break down. I knew against him that I had to keep my discipline and keep errors to a minimum because otherwise he would have a very good chance of beating me.

“I had to be mentally very strong because I have never beaten him so he always has that psychological edge. 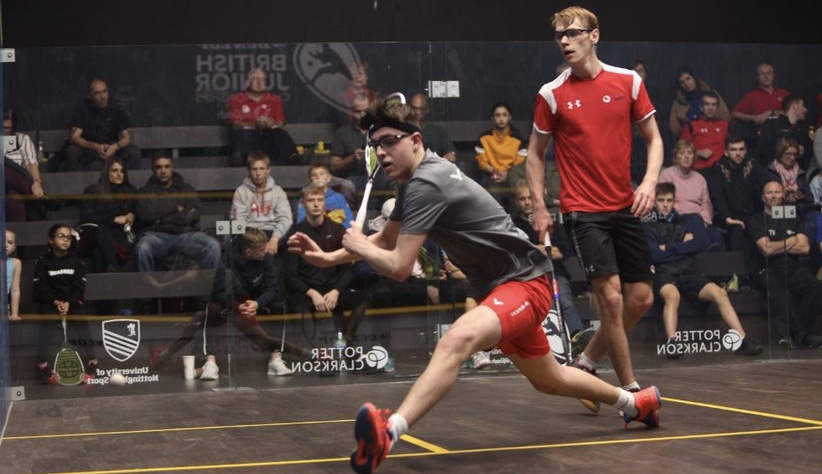 “Nick and I have only ever played once I think as under-11’s, so I can’t really remember it. It is going to be a very tough game for me as he is very strong around the middle.”

Speaking after the semi-final, Wall was pleased with how he executed his game plan and is relishing the chance to have another shot at the BU19 title.

“I feel like I played well and exactly how I wanted to against Alasdair and played a controlled game where he was doing most of the work,” he said.

“I’m happy with how I’m playing and feeling good going into the final against Lewis.

“He’s somebody who I haven’t played very much but I think it will be an entertaining match and interesting to play as we are both lefties.

“I’m very hungry to win the title this year after falling short in the final last year.”

Meanwhile Yorkshire’s Sam Todd has the opportunity to clinch the BU17 crown at the first time of asking after the top seed overpowered a valiant [11] Franklyn Smith (Sussex).

“It was a tough five-gamer but it was good to win,” said a relieved Bartley. “I feel confident going into the final. I haven’t played Torie in a while so it will be a good match. Hopefully I can play as well as I did today.”

Meanwhile, Denis Gilevskiy is one win away from adding to the BU13 title he secured last year after the Irishman stormed into the BU15 final after overcoming [6] Thomas Ramsay (Cambs).

In the GU13, it will be another battle between the top two seeds as [1] Meha Shah (Warks) will face [2] Amelie Howarth (Hamps) face each other for the title.

A stage behind the other draws in the GU11, [7] Isabella Hutton (Sussex) and top seed Emily Coucher-Porter (Oxford) will go head-to-head in the first semi-final, while Jaspeet-Kour Nahal (Yorks) will face [2] Mariam Eissa (Warks) in the other.

And in the BU11, top seed Ronnie Hickling (Surrey) faces [4] Jake Johnston in an all-Surrey semi-final clash, while [3] George Griffiths (Hampshire) will challenge Berkshire’s [2] Dylan Kalar for a place in the final.

All the age group results here on Club Locker.