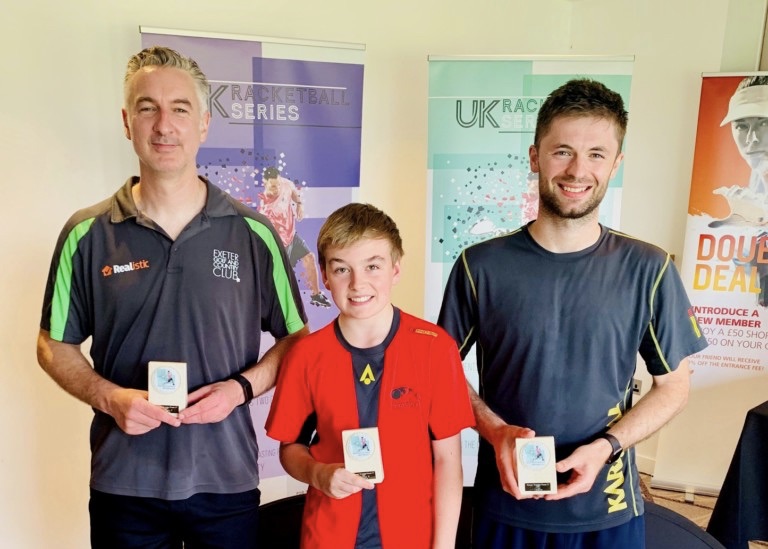 Mike Harris clinched a hat-trick of National Racketball titles when he beat Tim Vail in the final at Edgbaston Priory.

The Edgbaston Priory Club was packed for the sport’s 36th National Championships, bracketed with Squash 57.

In what was one of the most entertaining matches of the weekend, nine-times Nationals runner-up Ted Jeal was defeated by Chris Bently. The third game was critical going Bentley’s way 14-12.

Squash legend Parke always draws a crowd. This was Parke’s first Racketball Nationals and he was great to watch. A tough draw gave him the #2 seed Mike Harris in the quarter finals and Parke was beaten by the better man on the day. Never one to give up, I’m sure that we will see Parke back and looking for revenge against the man almost 20 years his junior.

This was the biggest Racketball/Squash57 Nationals ever. It was a fantastic weekend and a great advert for a sport that has a new energy behind it and what is increasingly looking like a very bright future.

The weekend saw 240 players competing in 318 matches across 23 grades ranging from Under 13’s through to Over 80’s. This was the sport’s biggest tournament ever in terms of entries, categories and matches played. Squash57 is the only sport ever to host a National Championships for such a wide range of ages over just one weekend. It was great to see such a diverse group of players all coming together to play the game.

The Over 50’s took centre stage over the weekend as the most popular category, filling the full 32 draw and reflecting the successes of the age category in the domestic series throughout the year. This is the most popular grade of the UK-Racketball Series with big Over 50’s competitions taking place right across the UK every month.

The matches did not disappoint with some fantastic encounters and upsets right from the start. The two on form Series players, Dan Fernandez and Marc Thornley, were the event’s #1 and #2 seeds and both lost in early rounds which immediately opened the event up. In the end it was Mark Francis (Huddersfield) who capitalised, defeating Rob Hambrook (East Anglia) in the semi-finals and then Mervyn Davies (Shrewsbury) in the final.

Five grades ran in the Junior Racketball Nationals. The youngest competitors on the day took part in the Boys Under 13s, with Dylan Kalar crowned champion after his victory over Anthony West. The boys Under 19 event was won by Marcus Tranter with a victory over Ollie Cartwright in the final. Marcus’s sister, Jasmine Tranter, completed the family double by taking the Girls Championship with victories over Anya and Meha Shah.

Duffield’s Lesley Sturgess maintained her amazing run of National Titles which she started in 2007 in the Women’s Over 45’s. Since then she had won 13 titles and added two more this weekend with victories in the Over 55s against Siobhan Garland (Falmouth) and the Over 60s against Jo Robinson (Ebbisham). Bett Dryhust (Barnt Green) was once again victorious in the Women’s Over 70s, taking her to title #31, a run that started back in 1985 when the tournament was into its second year.

It was the strongest field yet in the Women’s Open category. Three times National Champion Natalie Lawrence (Devon and Exeter) was defeated by up and coming Amber Marshall (Broxbourne) 11-6, 12-10, 11-4 in the first of the semi-finals.

Amber Marshall has had a great couple of years on the UK-Racketball Series, winning first the National Doubles title in 2018 and then the East of England singles at the start of this year.

This was her first final on the sport’s big stage and up against experienced and two times winner Saffery this was always going to be tough. Marshall got progressively better and almost took the third but eventually lost 11-9 in one of the highest quality games across any grade over the weekend. Saffery claimed her third title on home soil at Edgbaston without dropping a single game throughout the competition.

The men’s final was a match that had been anticipated since before the first ball had been struck. Tim Vail, 10 times National Racketball Champion, was taking on two-times National Squash57 Champion Harris. This was the first competitive meeting of the two champions and it was Vail who made the strong early start, taking the first game 11-8.

The start of the second was tight but at 5-5 some uncharacteristic errors from Vail allowed Harris to pull away and take the game 11-7. The third was tight and proved to be the tournament decider, it could have gone either way but Harris hung on to take it 11-9.

Vail had thrown everything he had at the third and Harris was in no mood to let the 10-times champion back in. A positive start from Harris in the fourth and it was too much for Vail to recover. It finished 11-2 to Harris and a very well-deserved National Title to a fantastic ambassador for the game.

Harris’s victory made it four titles for Exeter Golf and Country Club players. Jo Perriam (playing in her first Nationals) was runner-up in the Women’s Over-45 category, after converting from squash to racketball around 18 months ago.

Teenager Ioan Sharpe took the lead in his own age category of Boys U15, in what was his first Racketball Championship, having found success in squash playing for Wales. Ioan went on to play in the next age group up, and won first place in the U17s as well.

Mike Gregory was playing across two age groups as well, the Men’s Over-40s and Over-45s. He ended up having seven matches across the weekend in two strongly contested draws. He lost out in the semi-finals of the Over-40s to the top seed and eventual winner, Richard Davies from Staffordshire, but managed to regain his Over-45s title. In the semi-finals he took out Jon Gallacher, the number one seed and his Devon team-mate, before then beating second seed James Powley 3-1 in a tough final.

Mike Harris said: “All in all, it was a great weekend for Exeter Golf and Country Club racketball players. It is also worth remembering that Mike Gregory, Jo Perriam, Caroline Wright, Tim Gillingham and myself also played for our very successful Devon senior sides this year, and also the Men’s Racketball team came second in the UK National Club Championships.”