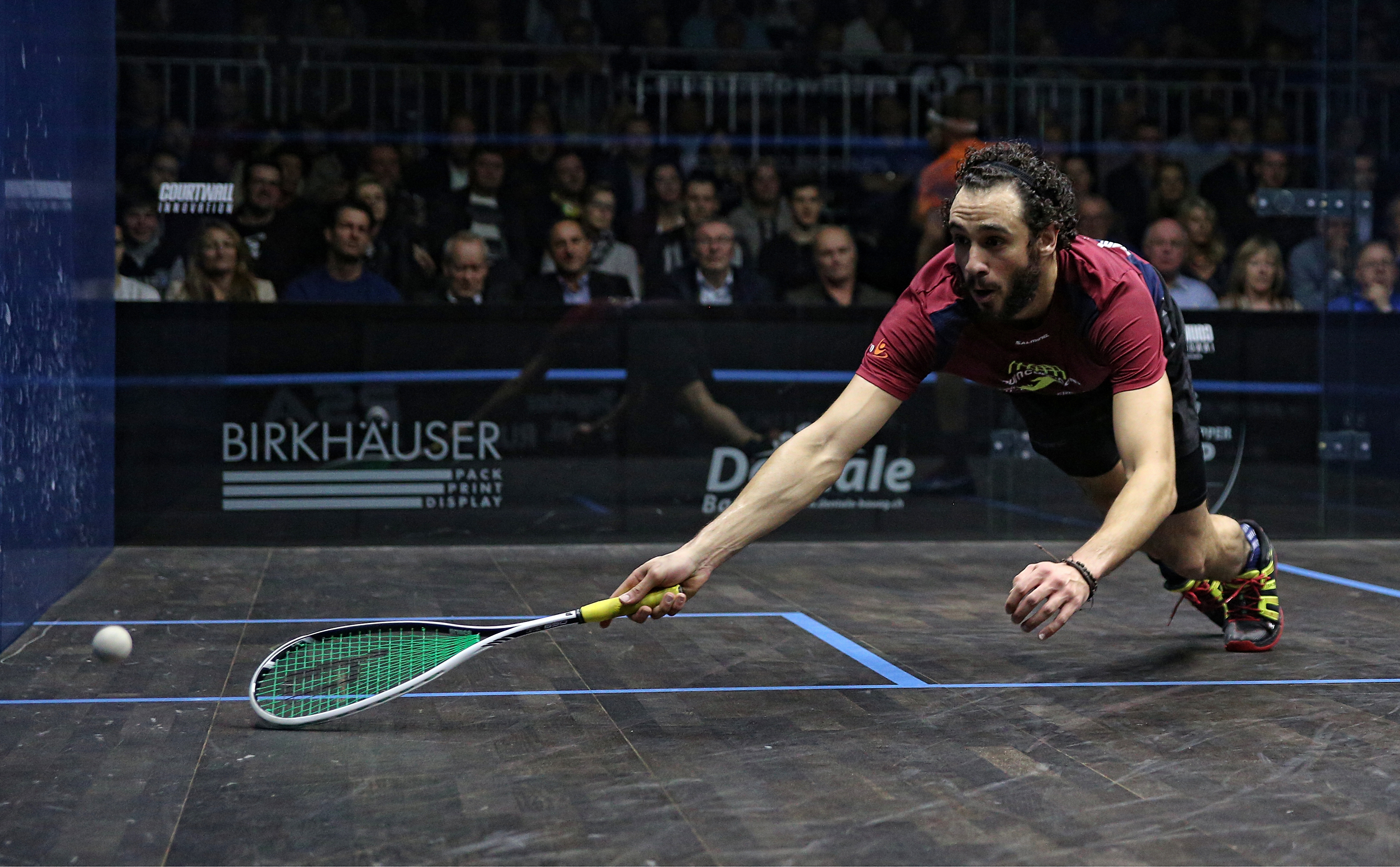 Ramy Ashour in action in Zurich

The Professional Squash Association (PSA) has released new data captured through innovative partnerships with Sports Data Labs and interactiveSquash that suggests squash could be the most physically demanding racket sport in the world.

Through the use of pioneering new technology, data captured during recent PSA World Tour events in Chicago, Sweden and Zurich saw player heart rates regularly exceeding 190bpm. Players often covered up to five kilometres in a single match, combined with hundreds of lunges, multi-directional movements and explosive bursts of acceleration.

For the first time quantifying the physicality of top-flight squash, the data has shone a light on the supreme physical demands required of professional squash players when competing at the sport’s elite level – while reinforcing squash’s position as one of the healthiest sports in the world.

The data has simultaneously placed squash at the forefront of conversations surrounding biometric data with Sports Data Labs tracking player heart-rate data in real-time. The stats have been fed live for in-broadcast use to improve viewer experience and translate the intensity of lengthy rallies, and the players’ recovery abilities, into homes around the world – emphasising the sport’s commitment to enhancing athletes’ and viewers’ experiences, a cornerstone as squash vies to be included in the Olympic programme.

Their systems saw players peaking regularly between 190-199 bpm – with the average recorded heart rate throughout the monitoring period 171 bpm. The data, which offers a true glimpse into the minute-by-minute exertions placed on a player, is set to be available for commercial activation in the near future.

During one match recorded by interactiveSquash’s distance-tracking programme ‘MoTrack’, Egyptian Tarek Momen was followed as he won a thrilling 97-minute five-game match over Frenchman Mathieu Castagnet. Momen covered just shy of 5 kilometres during a total of 100 contested points – an average of 49 meters per point – while striking the ball almost 1,000 times. 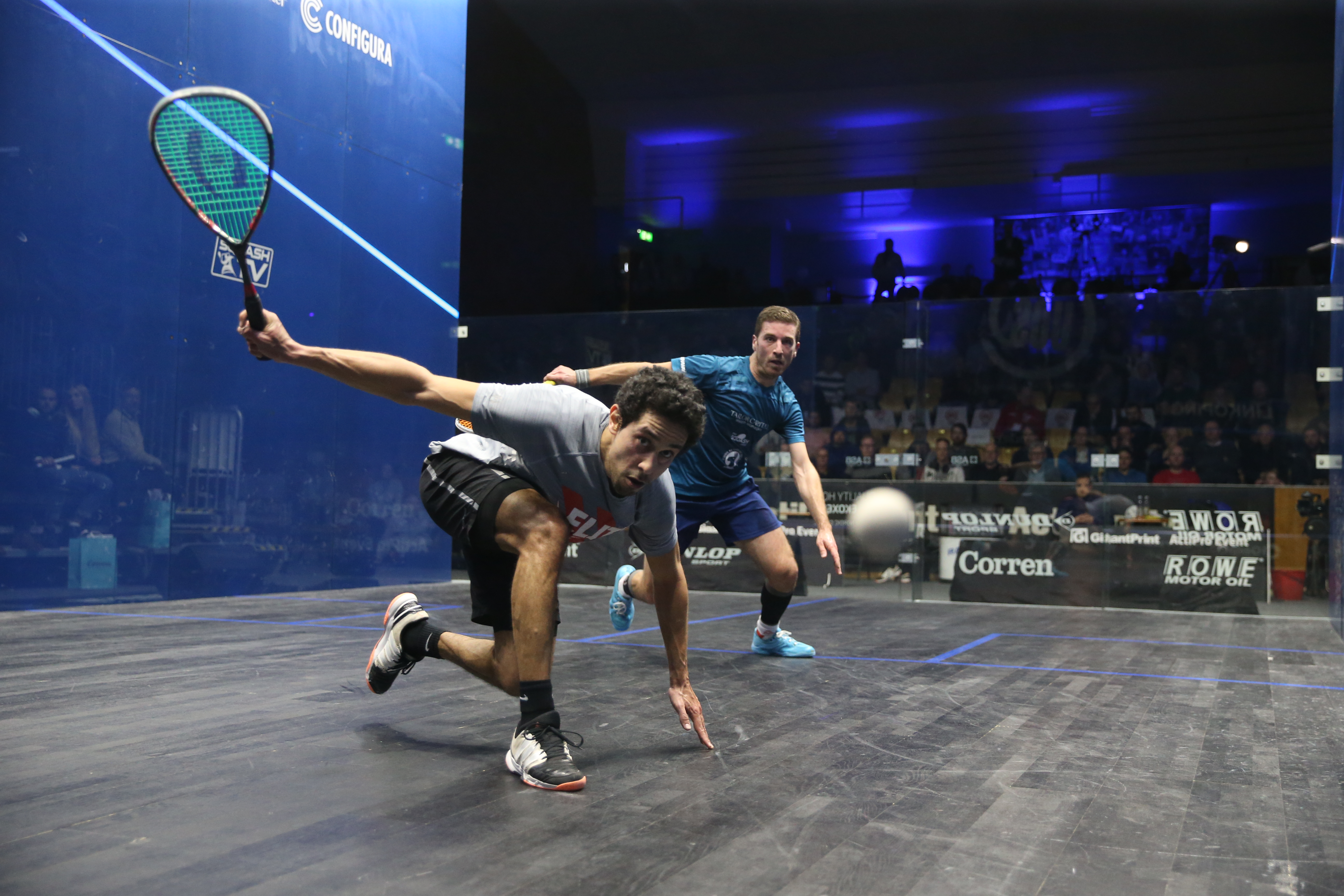 Tarek Momen was monitored during his match against Mathieu Castagnet

The longest single rally recorded during the time period, a 141 second affair won by another Egyptian, Ramy Ashour, saw the 30-year-old cover 235 meters and complete a dozen lunges of 90 degrees or greater – while striking the ball almost 50 times.

Through an average 52-minute match, players can expect to cover 2.5 kilometres, execute more than 100 lunges and strike the ball over 500 times – with the ball in play 63 per cent of the time for an average of 33 minutes – a figure that pushes squash towards the very top of the relative time-in-play tables compared to other sports.

“Squash has long had a reputation as one of, if not the single most demanding racket sport out there courtesy of the complex movements required and the repeated bursts of short, intense action with little rest periods – without mentioning the mental focus and concentration needed to compete at the elite level,” said PSA COO Lee Beachill.

“That reputation is one that we have lacked the ability to directly translate to fans and viewers in the past. But the trials we have run with Sports Data Labs and interactiveSquash have allowed us to develop a true understanding of players’ movement and relative fitness for the very first time, which goes a long way to help illustrate the physicality of the sport – and reinforce the health benefits associated with playing the game at the amateur level.

“The numbers we have seen have made for compelling reading. To see players covering over one kilometre in a single game is staggering. That movement is made up entirely of three-six meter sprints, of which 30-40 per cent is a backwards movement, followed by a lunge or dynamic movement before striking the ball – a movement which in itself requires precise timing, strength and deft motor skills.

“We’re hugely excited about what this data can mean for squash moving forward and the next step for us is to fully integrate the technology into our broadcast programming and social media channels in real-time to add a new dimension to the sport and enhance the experience for players and fans alike whilst also exploring the commercial opportunities that accompany these kind of data streams.”

Sports Data Labs President and Co-Founder Stan Mimoto said: “Sporting associations, media organisations and fans alike are demanding new forms of data to enhance both the viewer and player experience. We’re delighted to be working with the PSA to help bring squash to life with the addition of real-time human data that helps illustrate just how demanding the sport is. 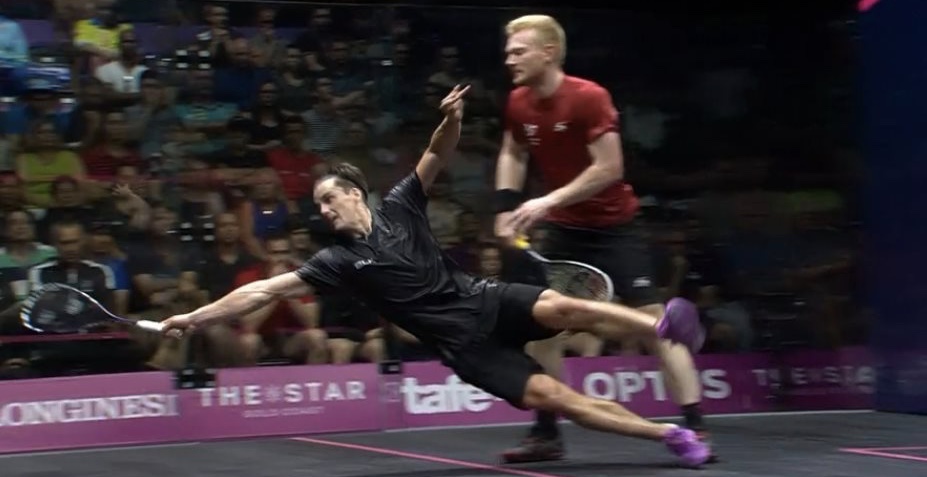 “We have seen first-hand that the data can greatly enhance the viewer experience and add a new layer to the broadcast production. It also allows players to gain greater insight into their own body which can be utilized in a number of different ways to improve their overall training and levels of play. In addition to player performance, we are excited that our technology opens up an entirely new commercial marketplace for the sport.”

The interactiveSquash system, developed in partnership with ASB Squash Court, records player movement, gather distance and movement patterns, while plans are in place to expand the tracking system to record data such as ball speed and swing speed – metrics which would yield a greater insight into the demands of playing at the top level.

InteractiveSquash founder Markos Kerns said: “It is hugely exciting for us to be involved in this new step for squash.

“Gathering performance based data showcases just how phenomenal these athletes are and we are thrilled to be at the cutting edge of this new development in squash.

“It is one of the fastest and most dynamic sports in the world and it takes an exceptional talent to compete at the very elite level. It takes an extraordinary athlete and talent to win at this level and we look forward to working closely with the PSA to develop the technology even further in the coming months.”

The release of data by the PSA was timed to coincide with World Health Day (they are only 18 years behind the launch of World Squash Day) and came as the Commonwealth Games showcased the sport on a global scale.

The Games featured several marathon battles, listed below, with Joel Makin of Wales featuring in three absolutely massive matches and champion James Willstrop coming through two phenomenal battles before closing out the final in under 50 minutes.

Fittingly, the longest women’s match was an epic battle in the final between Joelle King of New Zealand and Sarah-Jane Perry (England) lasting 78 minutes.

Pictures courtesy of PSA and WSF