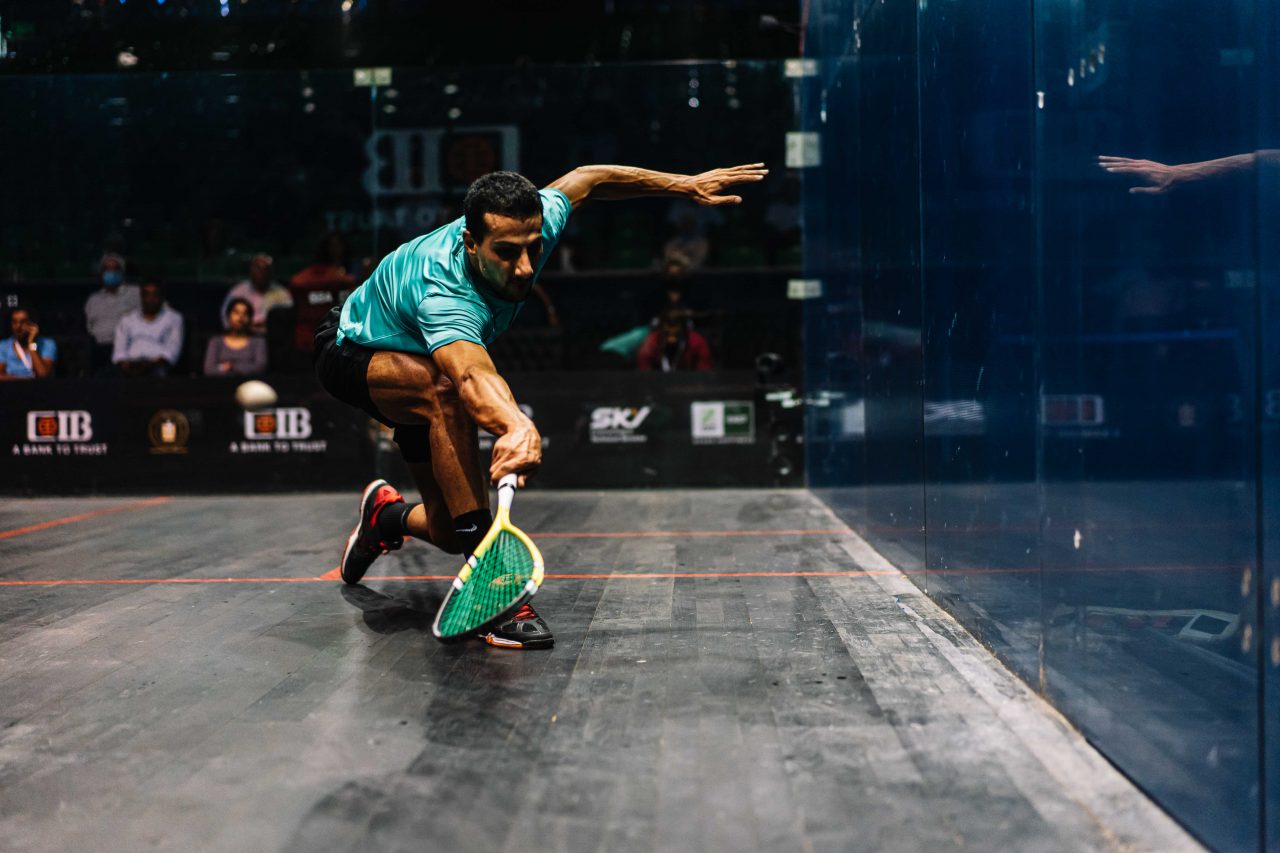 Mazen Hesham in action during his win over Saurav Ghosal

On the glass court erected in front of the Great Pyramid of Giza, Hesham earned his place in the last eight of a PSA Platinum tournament for the first time since May 2019 courtesy of an 11-8, 11-9, 11-8 victory over Ghosal in 56 minutes.

Hesham, who has chopped off his dreadlocks before undergoing military service after this tournament until the end of 2021, claimed a huge scalp against defending champion Karim Abdel Gawad in the previous round. And his win over Ghosal means he will line up against CIB PSA World Tour Finals champion Marwan ElShorbagy in the quarter-finals.

“I’m enjoying myself, playing in front of the Pyramids in Egypt, what else do you need?” said Hesham afterwards.

“I had to fight in each game and especially for the last few points, the crucial points at 8-8 and stuff like this. I’m really happy to be here, to be playing and enjoying my squash again and moving a little better. I have felt like an 80-year-old for the last few years, so I am living up to my age again.

“I have the best fans here. My mum, dad, cousin, my coach has helped me a lot these last few years and Hossam, the new addition to the team, these guys are amazing. I’m a hard case to deal with, I’m trying to be a better person and a better player, and I think it’s all going to plan.”

ElShorbagy got the better of England’s Nathan Lake to win in three games at the New Giza Sporting Club, while World Champion Tarek Momen overcame Mexico’s Cesar Salazar in the other men’s match at the Pyramids.

“I think I played a good match,” said Momen. “It definitely helps when I play in my hometown and against foreign players. I’ve had this experience here and at the World Champs as well, I had a lot of Egyptian support and it made a difference. Overall, I’m very happy to be playing at home and winning matches and I’m very pleased to be coming back the day after tomorrow.”

In the women’s event, World No.10 Salma Hany earned her spot in the quarter-finals after coming back from two games down to beat World No.8 Joelle King at New Giza Sporting Club.

The match was a scrappy, feisty affair with a number of traffic issues throughout and the players had stern words for each other on court. But it was Hany who held her focus during a dramatic fifth game to secure her place in the last eight.

“It was fight or die today,” Hany said. “It was a scrappy match, I apologise to Joelle, but sometimes you are not going to win playing only great shots. Sometimes you have to accept you are not playing your best squash and just dig in and grind it. I have the upmost respect for Joelle, she is a very fair player… I was not walking out of that court a loser today.”

Hany’s opponent will be World No.4 Nour El Tayeb after she eased past fellow Egyptian Nadine Shahin in straight games, while World No.2 Nour El Sherbini made her return to the court where she picked up her fourth PSA Women’s World Championship title last November.

El Sherbini, who overcame the now retired Raneem El Welily to lift the most prestigious title in women’s squash on her 24th birthday, claimed a 3-0 win over Canada’s Danielle Letourneau.

“It’s always a pleasure playing here,” said El Sherbini. “I’ve had the chance to play here twice and it’s been good for me, once I won and the other I was runner-up. I definitely have good memories here and it’s good to be back, hopefully I can add another memory here.”

India’s Joshna Chinappa stands between El Sherbini and a place in the last four after she overcame 18-year-old Egyptian Farida Mohamed in five games.

The quarter-finals begin tomorrow (October 14) at the iconic Great Pyramid of Giza from 18:00 (GMT+2) onwards. Action will be shown live on SQUASHTV and the official Facebook page of the PSA World Tour.