Guest Contributor May 15, 2020 No Comments on Home advantage pays off for Arscott and Chileshe on day one of squash’s brave new world 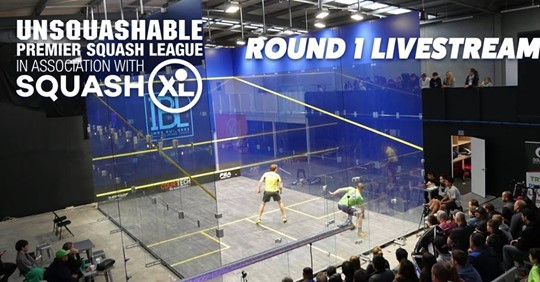 Competitive squash made a comeback after seven weeks of lockdown with a global audience tuning in to the first day of action in the Unsquashable Premier League at the XL Club in Auckland.

Two of the players, Joel Arscott and Temwa Chileshe, literally enjoyed home advantage. During the coronavirus shutdown they have been living and training every day at the club!

Not surprisingly, the number one and three seeds both won through to the semi-finals. There were no major upsets in the initial round but every player, and fans tuning in on the PSA Live YouTube channel, were all agreed on one thing: it’s great to be back in action.

Held on the glass court at the SquashXL centre and featuring the majority of New Zealand’s best domestic players, the first match had 20-year-old top seed Arscott facing the oldest competitor in the eight-player field, Remuera Rackets Club’s Michael Shelton-Agar, with his sometimes unorthodox play.

Both players were lacking match practice and conditions on the cool side meant it was always going to take a while to get into their stride. Arscott, with a current PSA ranking of 235, was keen to play from the front of the court and took the first game 11-8 with unforced errors from both players.

The second game had Shelton-Agar rise to the occasion and play some shots which were unreturnable and difficult to predict as he won 11-6.

Into the third set and Arscott gained control with a more positive style of play for a scoreline of 11-7. He quickly wrapped up the fourth game and match 11-1 in what was a clinical display.

The second match was a replay of the New Zealand Under-19 final from the previous year and featured two of the rising stars, Elijah Thomas, 17 from the Eden Epsom Club in Auckland and 18-year-old Glenn Templeton, from Katikati in the Bay of Plenty.

Templeton won that match nine months ago in five dramatic sets and it was close again on this occasion.

Templeton, who is ranked 357 and is 6ft4in (193cm) or more with a powerful build, won the first game 11-9 with wide sweeping backhands and efficient forehands. But Thomas, who has also gained plenty of height in the past year, is very quick on the turn on court and fought back to win the second and third games 11-8, 11-3. However in the fourth Templeton showed he’s not just power and provided plenty of touch to win 11-9.

In the fifth and final game Thomas, who has a PSA ranking of 257, was able to win with a very comfortable 11- 1 scoreline for a total time of 40 minutes.

Squash is back in New Zealand

Match three had Chileshe facing Leo Fatialofa with the latter having turned 17 just two days prior to the Premier League start.

Chileshe, 19, is the younger brother of fellow pro, Lwamba who is ranked currently ranked 160 in the world.

Fatialofa started the match in frantic fashion with plenty of athletic ability and forcing Chileshe into uncharacteristic errors only for a late comeback and both players to drawing even before the umpire called “long or short” (setting to one point or two). Fatialofa appeared uncertain and the official decided short, which didn’t go the way of the younger player who found himself losing the set 10-11.

Chileshe won the next two game 11-7, 11-8 looking professional in his approach.

In the final contest Anthony Lepper accounted for teenager Jack Conder in straight games. Conder, from the Titirangi Club, is known for his intensity and energy on court and Lepper kept to a steady game plan for the 11-6, 11-9, 11-8 victory.

Semi-final matches have Arscott facing Thomas while Chileshe takes on Lepper from 3pm including plate matches until 6pm.