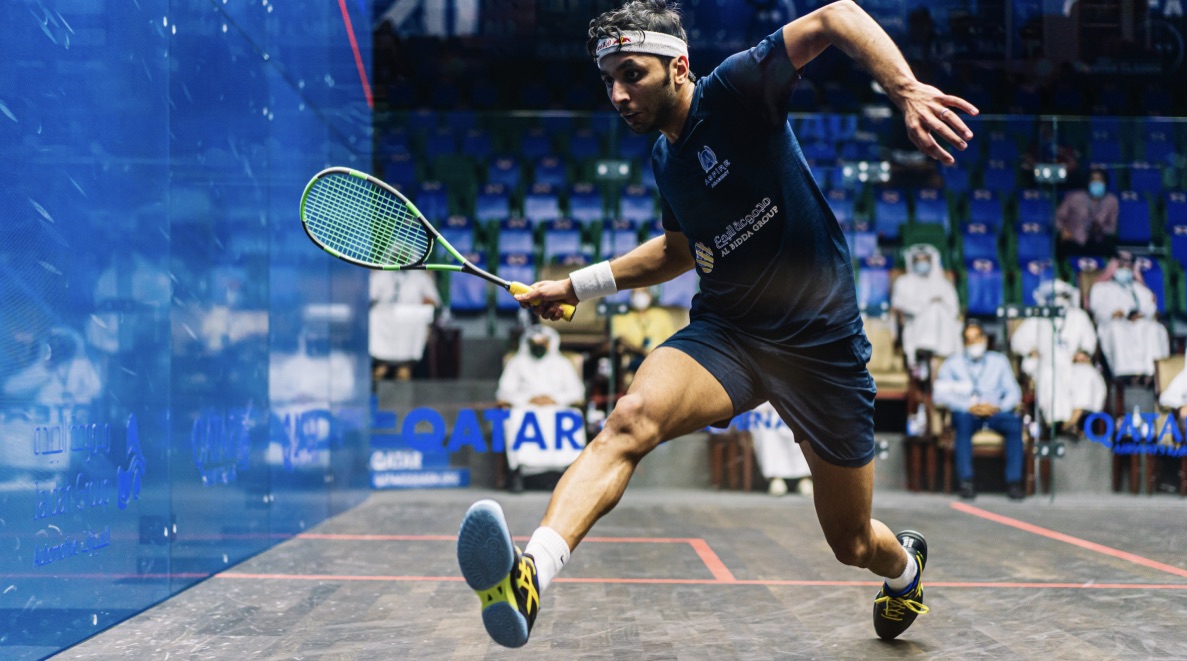 Abdullah Mohamed Al Tamimi is on form at home in Qatar

Qatari No.1 Abdulla Mohd Al Tamimi got his 2020 Qatar Classic campaign under way with a win over England’s Patrick Rooney as the PSA World Tour Platinum tournament began at the Khalifa International Tennis & Squash Complex in Doha.

The Qatar Classic returns for the first time since 2018 after taking a year out to host the PSA Men’s World Championship in 2019, and Al Tamimi will appear in the second round of this tournament for the first time after beating Rooney in five captivating games.

“It’s tough playing here at home,” Al Tamimi said afterwards. “I need to raise my level always, I just want to make the whole country proud. I had some great performances last year, so I had a lot of pressure on me coming into this first round, especially with the lockdown we’ve been having because of COVID-19. I haven’t had any matches since February in Chicago.

“I only played one match against Tarek [Momen] in Manchester and when I came back I had to do two weeks quarantine, so all that work went for nothing. I think its [the errors] just from a lack of matches and I’m really glad I got through this one. I’m sure against Diego I’ll be a lot sharper.”

Meanwhile, 2011 Qatar Classic winner Gregory Gaultier was also victorious on the opening day of action as he came back from a game down to defeat Spain’s Iker Pajares Bernabeu.

Former World No.1 Gaultier lost to Pajares when the pair met back in December at the WSF Men’s World Team Squash Championship, which was Gaultier’s first tournament back following a 14-month spell on the sidelines due to a knee injury.

Gaultier has been handed a wildcard spot for this tournament after his ranking – which is now up to No.56 – saw him miss out on qualifying for a place in the draw and he came back from a game down to complete a 10-12, 11-3, 11-9, 11-8 victory in 57 minutes. Gaultier will play CIB PSA World Tour Finals winner Marwan ElShorbagy in the next round in what will be their first PSA meeting since 2017.

“I’m very thankful to the Qatar Squash Federation for giving me the opportunity to get the wildcard to play,” said 37-year-old Gaultier.

“After being out for 14 months, my ranking went from No.1 to No.600, so I’m very grateful to them for giving me the opportunity to play otherwise I wouldn’t have been able to take part in this event. I’ve been coming here for 20 years, I missed the last two because of my injury, but I’m very happy to be back here.”

England’s George Parker has booked his spot in the next round after he prevailed in a gripping five-game contest with Frenchman Victor Crouin.

The court conditions favoured whoever took the ball in short more and it was initially Crouin who found his drop shots first as he made a superb start to the encounter.

But Parker felt his way into the match as he moved through the gears to take a 9-11, 11-8, 4-11, 11-6, 11-9 victory and he is rewarded with a second round clash with Egypt’s Mohamed ElShorbagy, who today lost his World No.1 spot to compatriot Ali Farag.

“I’m looking forward to it [playing ElShorbagy],” Parker said. “I’ve played him a few times in Bristol in training and didn’t win, so it will be an experience for me at No.40 in the world and 24 years old. I’m trying to get as much experience as I can playing in these matches when there is money and points on the line because playing these tough games is how you develop.”

Two players will be making their debut appearances in the second round of a Platinum tournament after England’s Richie Fallows and USA’s Shahjahan Khan beat Pakistan’s Tayyab Aslam and India’s Vikram Malhotra to reach that stage for the first time.

“I think being consistent [was the key], which is usually something I’m not,” said Fallows, who will play Farag next.

“I usually get to watch him [Farag] quite a lot because I’m normally out of the competition when I get home and I can watch him on TV. I enjoy watching Ali, he’s one of the best.”

Round two begins tomorrow (November 2) with top seed Mohamed ElShorbagy in action. Play starts at 11:00 (GMT+3) and will be shown live on SQUASHTV and the official Facebook page of the PSA World Tour (excluding Europe & Japan).