Alan Thatcher January 17, 2019 No Comments on Home hero Harrity happy to stay on track to gain first win under the chandeliers at Grand Central 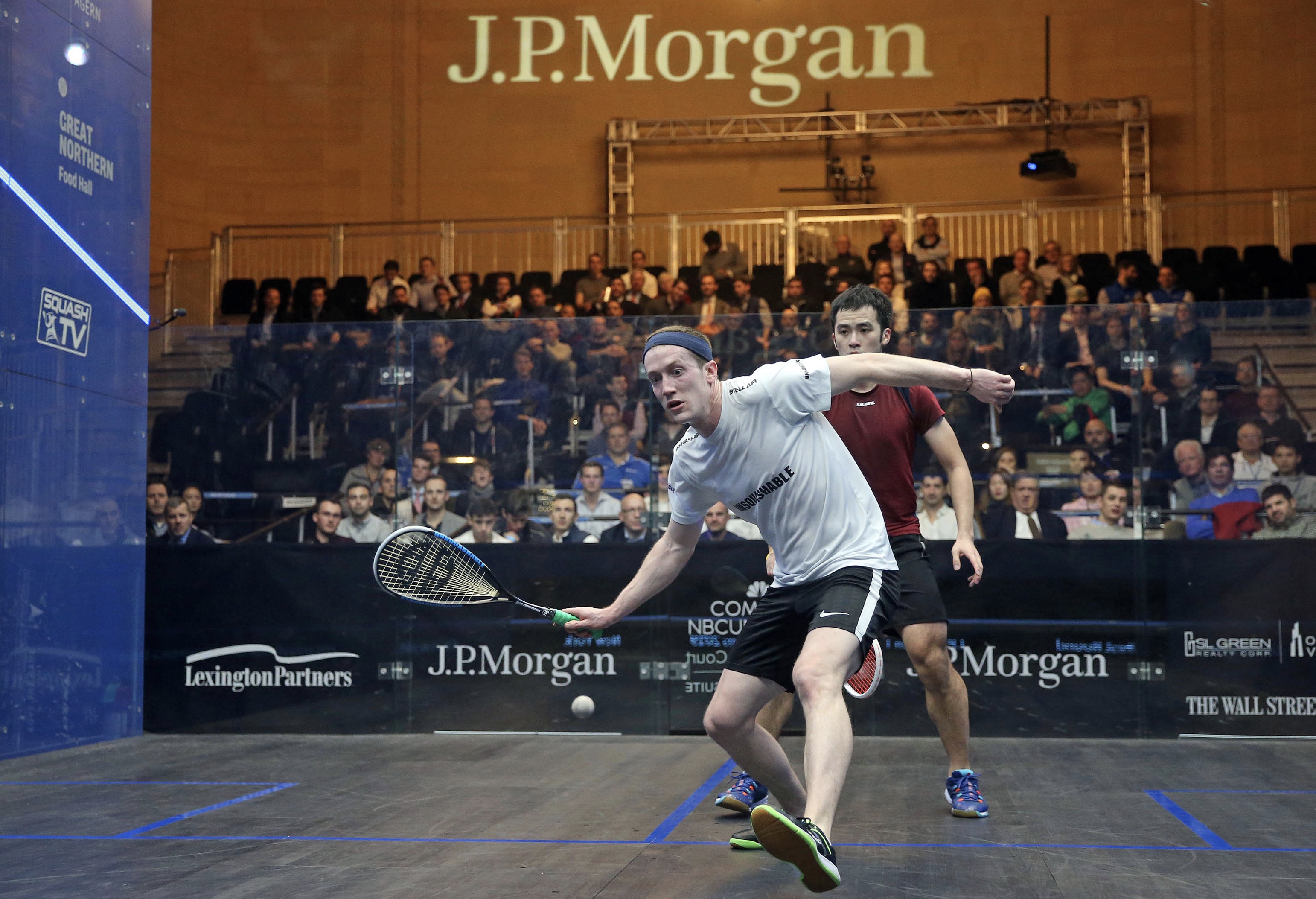 The opening day of action at the J.P. Morgan Tournament of Champions saw men’s United States No.1 Todd Harrity beat Hong Kong’s Tsz Fung Yip to book his place in round two as the PSA World Tour Platinum tournament got under way at New York’s Grand Central Terminal.

It was the first time since 1992 that a trio of American men had competed on the same night at the Tournament of Champions, with World No.48 Harrity, World No.63 Chris Hanson and World No.294 Timothy Brownell all appearing under the chandeliers of the stunning Vanderbilt Hall.

Harrity was backed on by a partizan crowd in New York and the 28-year-old from Wayne rose to the occasion as he came back from a game down to earn an a 6-11, 11-7, 12-10, 11-7 victory, securing his place in the second round of this tournament for the first time in his career.

“It’s great after all these years, to finally win on this stage, I am just overjoyed by it,” said Harrity, who will play World No.7 Paul Coll in the next round.

“In previous years I have just been so excited, so I come out with my heart racing, sort of a deer in the headlights with sensory overload. I don’t kind of feel like playing the match.

“I had some tactics to keep him in the back. He likes loose, random stuff, so I tried to keep it disciplined and I was having to go for chances. More than anything, I wanted to relax and just have a good, rich experience on court.”

Hanson, meanwhile, came up against former World No.3 Omar Mosaad and caused the Egyptian a number of problems throughout the 46-minute encounter, but Mosaad came through to take the win in straight games.

“This kind of match is stressful for me because he played in front of his home crowd,” said Mosaad.

“I just tried to focus, especially in the second game because I wanted to finish in three. I am training hard, really hard, and I think I did a good job.”

Mosaad’s reward is a second round fixture with World No.6 Miguel Rodriguez, and he will look to follow up his 3-2 win over the Colombian at last month’s CIB Black Ball Open.

Brownell, who is currently attending Harvard, was appearing at this tournament for the first time in his career after winning a wildcard playoff prior to the event and he took a shock one-game lead against Egypt’s Youssef Soliman, only to eventually fall in four games.

Soliman said: “I think both of us got excited, and he was playing with his home crowd. For me it is the first time in the States, and playing in this venue is definitely exciting.

“I was so nervous inside, I was struggling to find a rhythm because he played really well.”

Elsewhere, France’s Mathieu Castagnet and England’s George Parker played out a mammoth 137-minute battle in the day’s opening match, which saw Castagnet require treatment for a cut on his eyebrow.

The pair exchanged points in a feisty affair and it was World No.27 Castagnet who held his nerve to take it 12-10 in the deciding fifth game.

“I don’t mind, even if I need the stitches, I am going to do my recovery and then tomorrow I am back on the court,” said Castagnet afterwards.

“This is my job, I love the game and I want to give my best to come back. Even if I need stitches, I am going to come back for sure.”

Castagnet will play Egypt’s Fares Dessouky in the next round after the Egyptian made his return from a 14-month injury layoff with a runner-up finish at the CCI International last week.

There were also wins for France’s Gregoire Marche and Malaysia’s Eain Yow Ng, who caused upsets against Germany’s Raphael Kandra and Qatar’s Abdulla Mohd Al Tamimi, respectively. Marche will pit his wits against compatriot Lucas Serme in the last 32, while Yow will go up against Egypt’s Youssef Soliman.

Alan Clyne went down to Cesar Salazar, Nathan Lake was overpowered by Cameron Pilley, but Chris Simpson achieved an outstanding victory over Borja Golan to set up a second round tie against Greg Lobban, who beat Arturo Salazar.

The second round of the men’s draw will begin on Thursday January 17 as World No.1 Mohamed ElShorbagy and defending champion Simon Rösner get their tournaments under way. All of the action from Grand Central Terminal will be shown live on SQUASHTV (rest of world) and Eurosport Player (Eurosport Player) from 12:00 (GMT-5).

The Tournament of Champions will also feature a women’s tournament for the world’s best players, which takes place January 18-24.