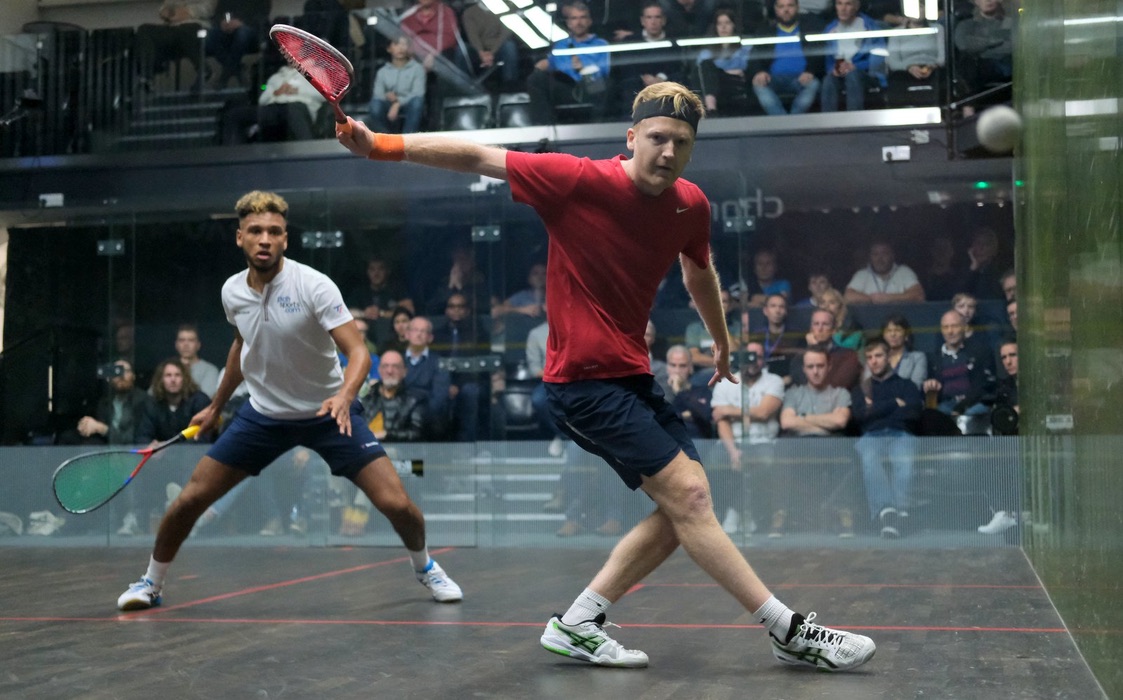 Tom Richards on the attack against Richie Fallows

World No.26 Tom Richards led a quartet of English stars into the second round of the Channel VAS Championships at St. George’s Hill after he beat compatriot Richie Fallows on day one of the PSA World Tour Gold tournament taking place in Weybridge, England.

Richards, a local favourite who trains at the St. George’s Hill Lawn Tennis Club where the tournament is taking place, was too clinical for his opponent as he utilised his knowledge of the permanent glass court to his advantage to down Fallows by an 11-8, 11-6, 11-7 margin.

“I’m lucky that I hit with guys that I know and like and I get to hit on this court a lot, which is a big advantage I think, because it’s very different to a lot of glass courts,” said Richards afterwards.

“The court is a lot different to how it plays normally. A couple of the other players told me that it was a bit dead. I believed them but having played on this court for years and years where it’s lively and bouncy, it’s a bit of a shock.”

Richards will clash with India’s World No.11 Saurav Ghosal in round two today. Joining him in the second round is Nottingham-born Declan James, who conquered wildcard Joe Lee in a tough battle to advance. 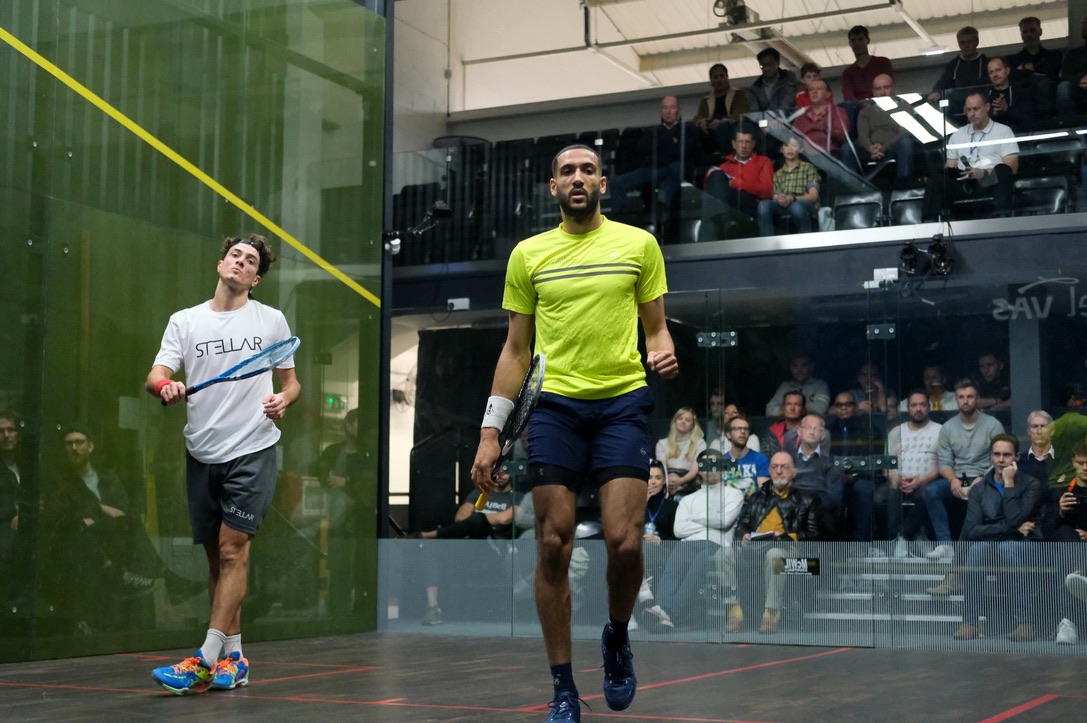 Lee, son of tournament promoter and St George’s Hill head coach Danny Lee, was making his first appearance at a PSA event in over two years after suffering with a serious back injury that saw him require two operations.

The wildcard displayed a stellar performance on his comeback on his home court, however, to put pressure on James, but it was the World No.22 who was able to prevail in three games.

James will take on World No.8 Mohamed Abouelghar for a place in the quarter finals in their first meeting since the Englishman claimed a shock win over the Egyptian at the DPD Open earlier this year.

“It doesn’t matter that Joe has had time out, I have huge respect for him,” said James. “Today, I knew that anything less than my best or 100% mental concentration then he would lap it up because it’s his home court and there is no pressure on him.

“I put pressure on myself and I expect a lot from myself so I’m very happy to win a match like this and be intense for the whole time. It was very hard, even though it was 3-0.” 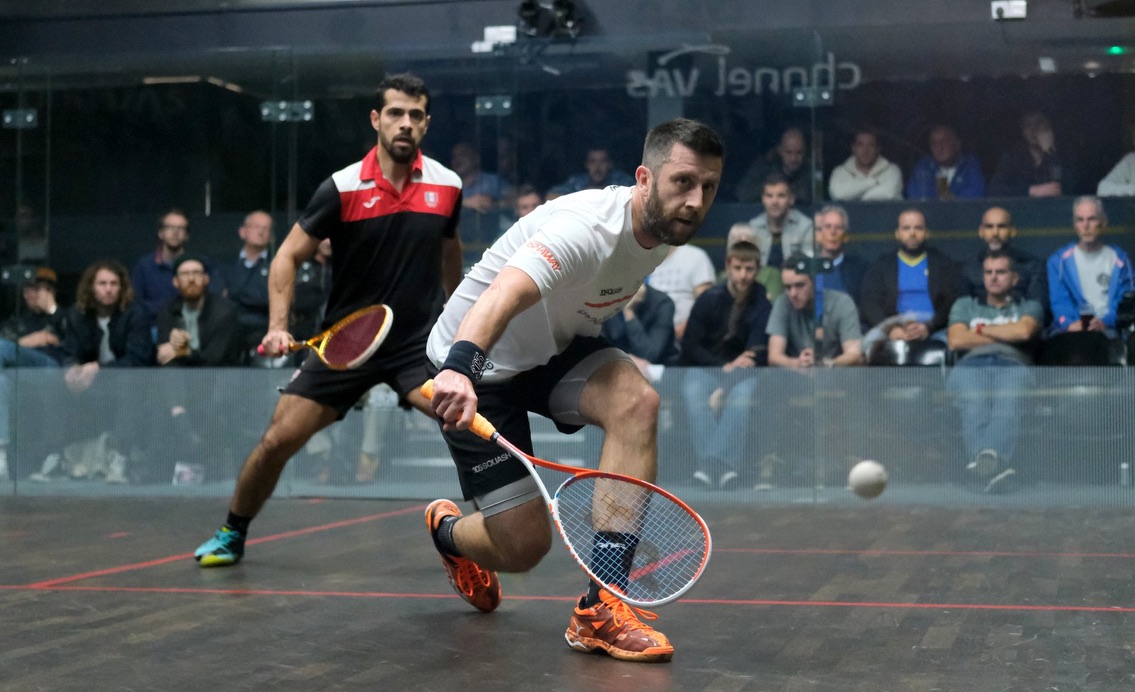 World No.42 George Parker and former World No.9 Daryl Selby were the other Englishmen to claim wins on day one after they defeated France’s Lucas Serme and Mexico’s Arturo Salazar, respectively. Parker won a massice contest with Serme that went to five games that lasted 77 minutes but Selby was pleased to get the job done in straight games in 29 minutes.

The longest match of the day saw Egypt’s Youssef Soliman and Spain’s Borja Golan go head-to-head in a gruelling 81-minute fixture with the Egyptian pushing through an injury struggle to book a second round slot against top seed and World No.2 Mohamed ElShorbagy.

The match saw both players push each other to their limits with some gruelling rallies on show. However, it was Soliman, who is 14 years younger than the experienced Golan, who was able to take the advantage and hold his nerve to convert the victory.

“He’s one of the most experienced players on tour,” said Bristol-based Soliman afterwards. “I knew it was always going to be a tough match. It doesn’t matter how old he is, physically he is so good and he always finds a way. I’m really happy to close out the fifth game.

“In the second game, I had a problem with my shin. It was like my leg was tight and planted in the floor, I just couldn’t move. I saw myself having to retire. But the physio worked on it and just released the tightness and I was able to go back on court.” 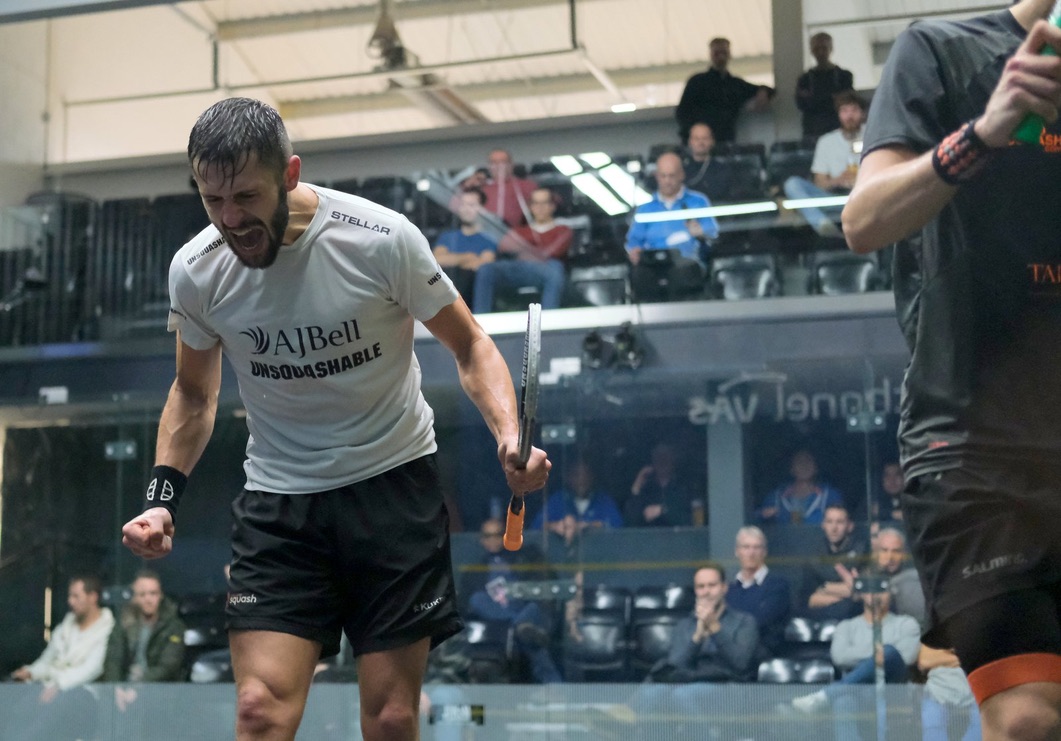 Also advancing to the second round was Soliman’s compatriot Mazen Hesham after he also saw his match go the distance to five-games against England’s Chris Simpson.

The talented Egyptian was forced to battle from 2-1 down against the English World No.45 to reach the last 16 in a topsy-turvy match between the two players with the momentum constantly shifting.

Hesham started confidently to take the first game, before Simpson displayed his own shot-making abilities to absorb the pressure and take a 2-1 lead. It was not enough though as Hesham regained his composure to take the match in five and will now face Peru’s Diego Elias in the last 16.

“I’m really happy to be stood here,” said Hesham following his win. “I really love playing and I cherish every moment now to be honest. I’ve started to really enjoy my game and I think I’ve started to find my range a bit more, I’m playing faster and getting better each tournament.”

Malaysia’s Eain Yow Ng and France’s Mathieu Castagnet were the other victors of the day as they overcame Qatar’s Abdulla Mohd Al Tamimi and Spain’s Iker Pajares Bernabeu in two tough battles.

Al Tamimi struggled to repeat his outstanding form in last week’s World Championship in his home country as the tenacious Yow finished strongly to take the fifth game.

The second round of the Channel VAS Championships begins today (Wednesday November 20) at 17:30 local time (GMT) when the top half of the draw – including World No.2 Mohamed ElShorbagy and Peru’s World No.7 Diego Elias – begin their tournaments.