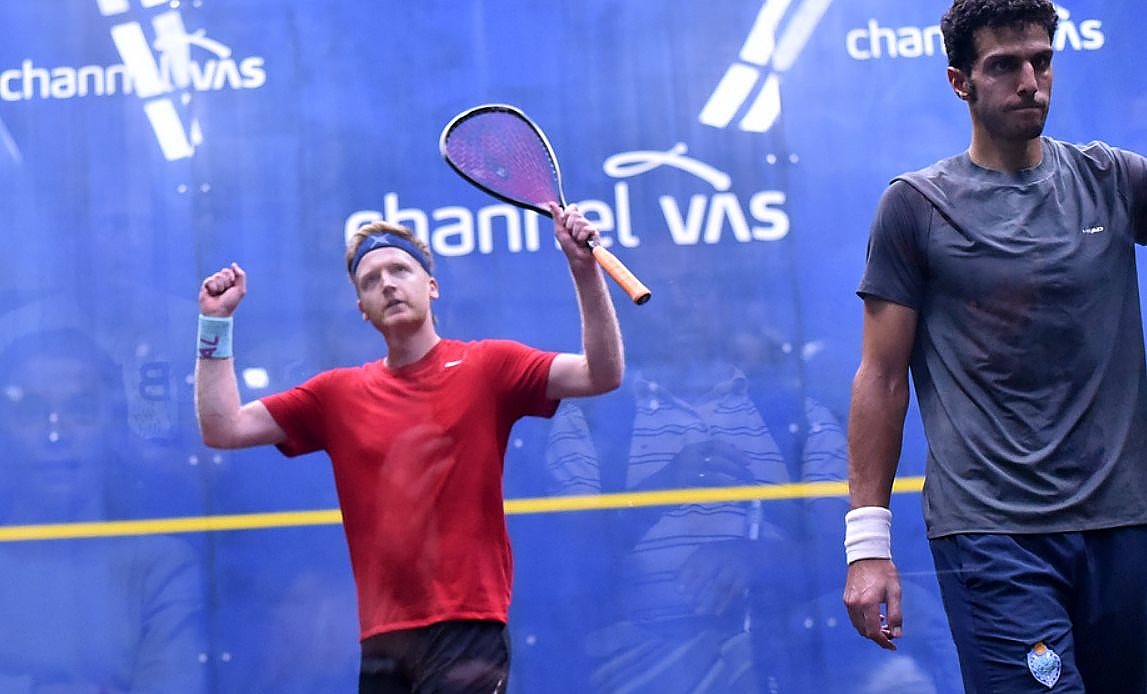 “[The result] has been coming for a few years, I felt like I’ve been playing well again over the last year and a half,” Richards said afterwards.

“I’ve been close to getting a couple of scalps, but I felt really good there. I was playing well and I feel fit and strong.

“It all comes down to that feeling when you win, that’s why you spend so many hours in rehab, in the gym and work so hard. Touch wood, I haven’t been injured for a year and a half now, and when I came back I thought I could compete with the players at my level. Now I feel that my base platform is good enough to compete with the top guys.”

Richards is rewarded with a last eight match-up against World No.2 Ali Farag, who came through a tough encounter with World No.20 Declan James. 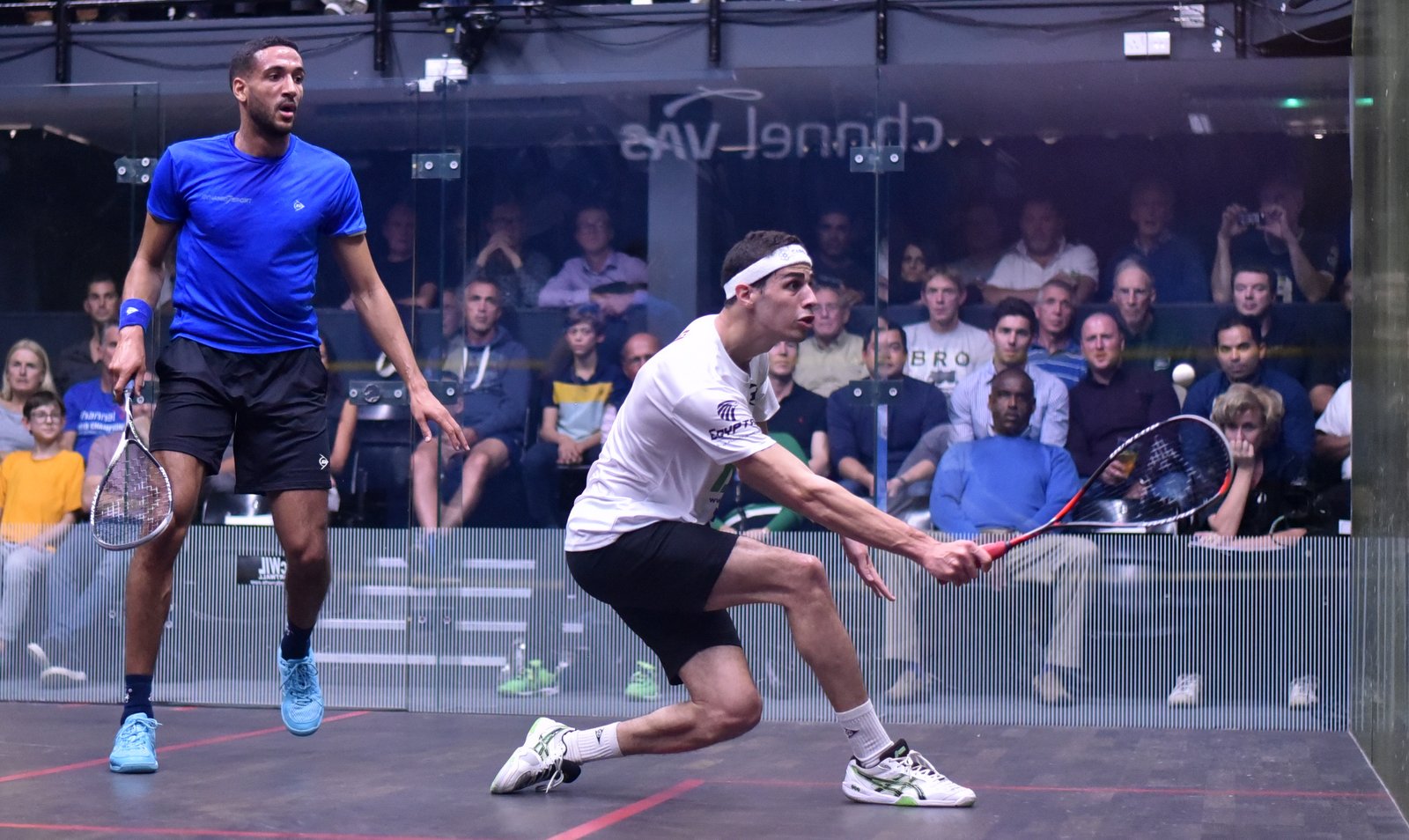 Ali Farag (right) in a battle with Declan James

Farag, 26, was put under huge pressure by James for much of the 57-minute match and had to overturn a game ball in the opening game before he went on to lose the second. But the momentum shifted back in the Egyptian’s favour in the third and he refocused to sneak the win in four games.

“Tonight’s match is a testament to Declan’s talent, he never ceased to attack and I’m just happy to get through today,” Farag said.

“It’s never easy to back it up off the back of another tournament, especially with serious jet lag, and especially when you get to play a great player such as Declan. We’ve played twice before already, but tonight is the best he ever played against me by far. He took it to me, he was never passive and never let off for a second.” 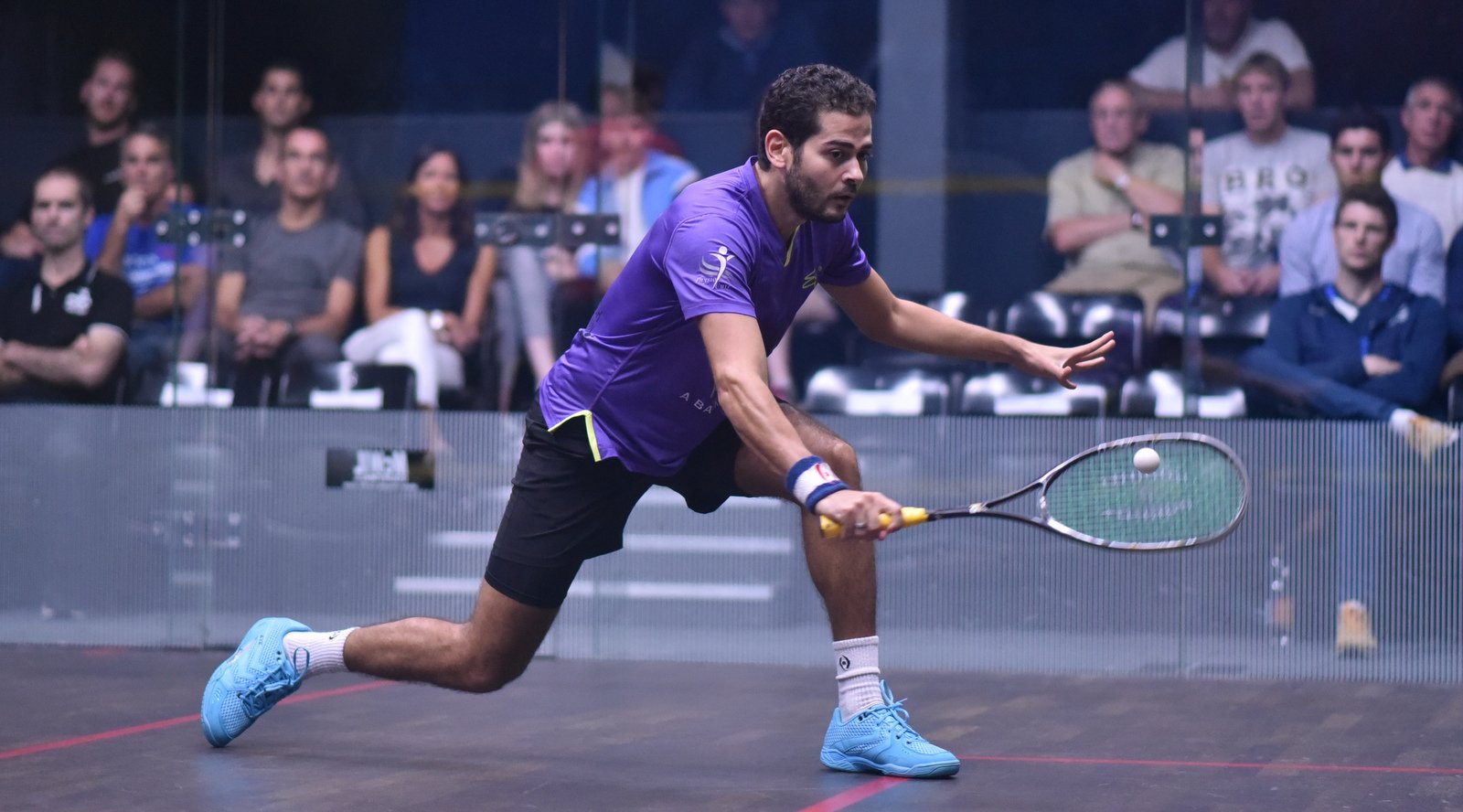 Meanwhile, former World Champion Karim Abdel Gawad booked his place in the last eight after he recovered from a game down to see off Scotland’s World No.34 Greg Lobban by a 3-1 margin on his Channel VAS Championships debut.

Gawad made a traditionally slow start as Lobban, who had already played on this court in round one, dominated the opener to go a game up for the loss of just three points. But the Egyptian came onto court a different man in the second as he found his range, and he looked considerably quicker around court over the course of the next three games.

“He made it very tough for me today and it’s always hard to play an opponent twice in a week,” said Gawad, who beat Lobban at the U.S. Open two weeks ago.

“I was trying to push myself in front a little bit. Luckily, I played some nice killing shots and I managed to find a way to win today, especially with him playing such great squash.”

Gawad will line up against Indian No.1 Saurav Ghosal for a place in the semi-finals. Ghosal booked his last eight berth courtesy of a 3-0 victory over France’s Mathieu Castagnet. 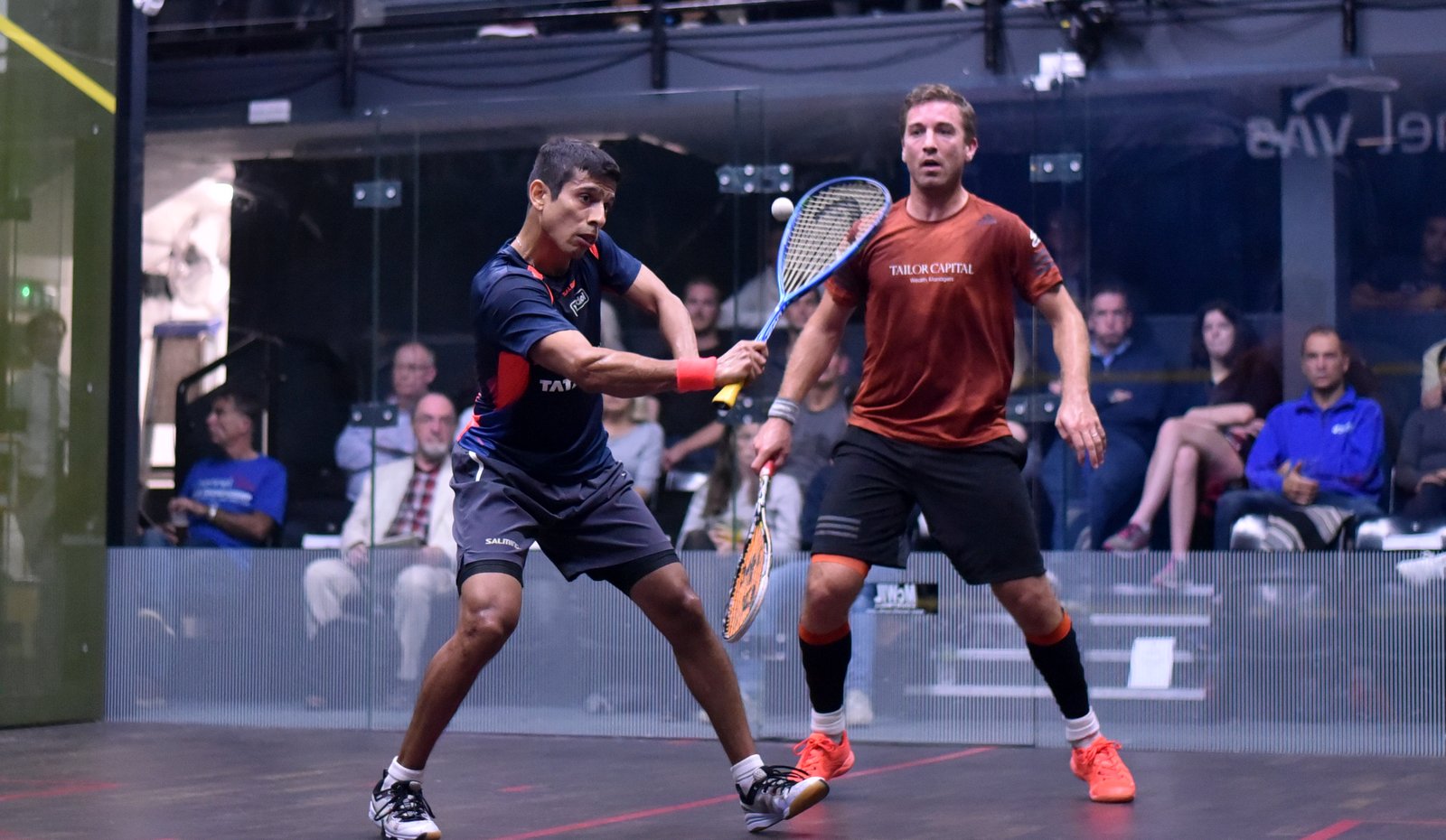 Saurav Ghosal makes it through against Mathieu Castagnet

Ghosal, the 32-year-old from Kolkata, was making his first appearance of the tournament after receiving a bye into round two, while Castagnet had to fight through a brutal 103-minute battle against compatriot Lucas Serme in the first round.

“I just tried to stay strong and solid,” said World No.11 Ghosal. “I took it in short, I enjoyed the court and the game, and I tried to implement the game plan we [coaches David Palmer and Malcolm Willstrop] wanted. I worked with them both in the summer, first David, then Malcolm for a month. Those two periods obviously helped, and I’m focusing now on trying to implement what we worked on.”

The quarter-finals of the Channel VAS Championships begin on Friday October 19 at 17:30 (BST) and all four fixtures will be shown live on SQUASHTV (Rest of World) and Eurosport Player (Europe only).