Alan Thatcher April 1, 2020 No Comments on How the Selby family is coping with the Coronavirus lockdown

Squash players who face several months with zero income are being helped by the PSA to claim compensation from their governments. Coaches are also able to claim unemployment benefits in many countries.

PSA staff are busy finding out how such frameworks have been set up in the large variety of nations from whom they draw their membership.

To find out more, I put some questions to the Selby family, who run the Off The Wall Coaching Academy. They must be one of the busiest squash families on the planet, with mum and dad Paul and Karen running the Academy, son Daryl playing on the PSA Tour, daughter Lauren working for OTW as well as being the national coach for Norway, and younger son Elliot working in the PSA office.

Paul said: “Lauren is affected in a big way, being the National Coach of Norway. She is currently unable to travel to do the work over there.

“From my point of view, as a coach, I am obviously unable to coach either on a one to one basis or with all the squads we do.

“The clubs are all closed with no prospect of them opening in the near future. I hopefully might get some government money as a self-employed coach but this will not be until June. All coaches or players who have profits of £50k or over per year averaged over three years are not eligible for any help in any way.

“From the Off The Wall point of view, we had to shut up shop the week before last and have 100 juniors unable to play or train. We have no revenue coming in so can’t offer any help to our self-employed coaches who now have no work at all.

“On the upside, it has given us a chance to to take stock of all of our resources and start work on a whole new batch of new ones. We can obviously do this by email and video conferencing and sharing files to collaborate.

“Karen is able to reorganise our office and get everything shipshape for when we are up and running again, which we are envisaging as being September.” 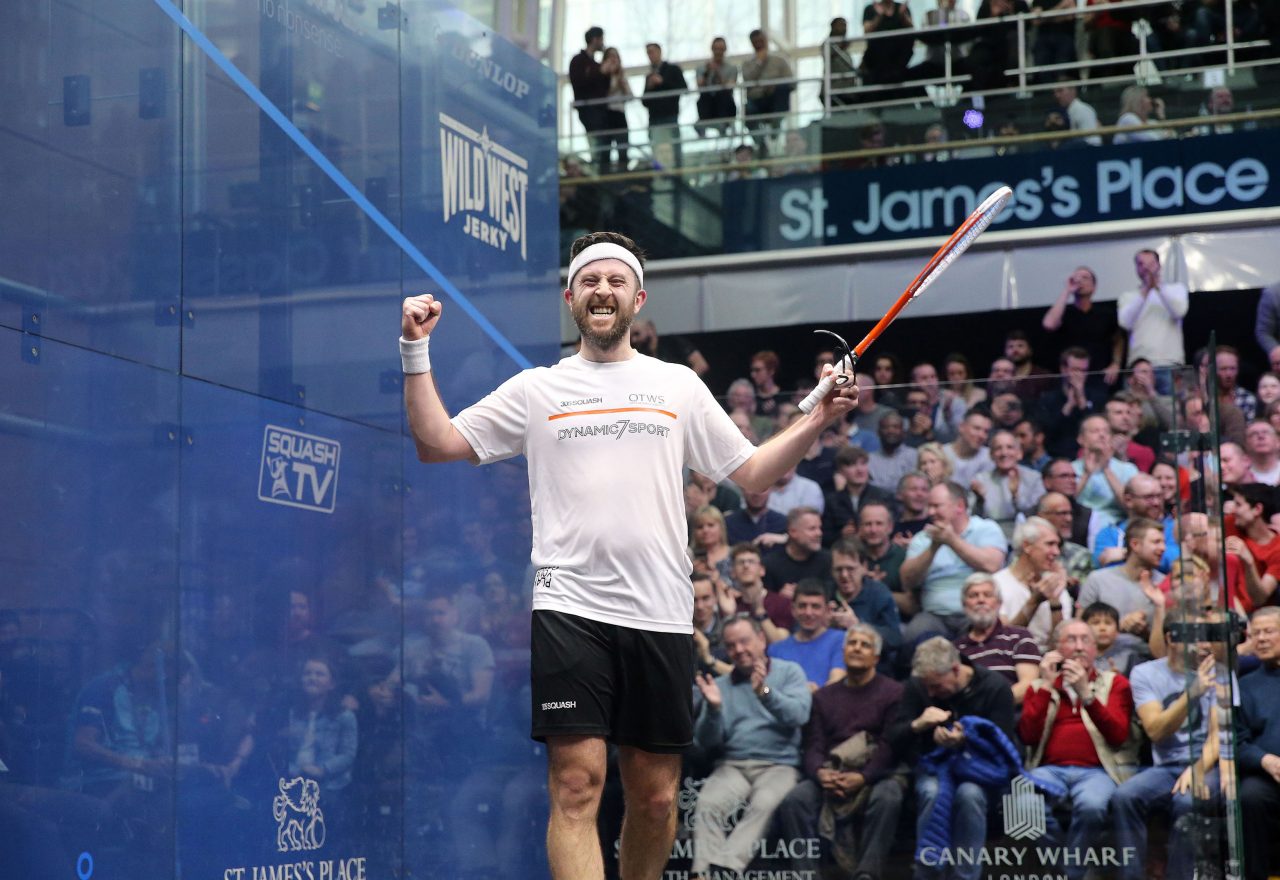 Daryl’s last performance was in the St. James’s Place Canary Wharf Classic, where he put in two massive performances. He  overcame Joel Makin in the first round after winning the second game tiebreak 15-13 and came close to another giant-killing comeback when he faced Tarek Momen in the second.

He has kept busy during the lockdown entertaining his social media followers with some fun home-based games of skill, including the Bog Roll Challenge!

Elliot replied wearing his PSA hat. He said: “PSA players can claim through the government for self-employed benefits.

“We have the below information for UK players. We are currently reaching out to all the federations that have PSA members and checking what government advice they have for those who are self-employed. We’re collating this information as we speak. As you can imagine, with some countries, it is quite difficult to find anything.”

Furlough will be available for players who are employed in some capacity and who cannot currently work due to restrictions and the nature of their job (e.g. if you are employed as a squash coach).

Those of you based in the UK who are employed (say by a club) may be eligible to claim up to 80% of your wage while out of work.

Employed people on zero hours contract that are paid through PAYE are also able to claim, based on their February earnings.

Reach out to your employer and check your options.

Self-employed people will be able to apply for a grant worth 80% of their average monthly profits over the last three years, up to £2,500 a month.

At least half their income needs to have come from self-employment as registered on the 2018-19 tax return filed in January – anyone who missed the filing deadline has four weeks from now to get it done and still qualify.

The scheme is open to those who earn under £50,000 a year – up to 3.8 million of the 5 million people registered as self-employed.

Unlike the employee scheme, the self-employed can continue to work as they receive support.

The money, backdated to March, will arrive directly into people’s banks accounts from HMRC, but not until June.

The grants will be taxable, and will need to be declared on tax returns by January 2022.

Company owners who pay themselves a dividend are not covered

I fully recommend exploring the Money Saving Expert website which is helpful and puts things into layman’s terms: https://www.moneysavingexpert.com/news/2020/03/uk-coronavirus-help-and-your-rights/

Off The Wall certainly bowed out on a high, with a huge number of pupils competing in their Roman Cup competition.

The Roman Cup has become one of the country’s most successful primary school squash competitions featuring more than 140 pupils representing 33 school teams.

The inter-school competition, which is part of the School Games, was developed following Off the Wall Squash coach Lauren Selby’s popular six-week programme which saw her team visiting up to five primary schools each day.

“The Roman Cup is growing from strength to strength. Back in 2012, we had just 30 children but we are now seeing five’s times that amount,” said Karen Selby, Company Secretary at Off The Wall Squash. “The Roman Cup is all about young people experiencing competition, but it’s done in a fun and friendly way. In the autumn, we host an inter-school competition for years 5 and 6, and in the spring for years 3 and 4.

“Schools like the competition element because it’s an important part of the PE and Sport Premium funding, and the role of the School Sport Organisers. Some schools now see squash as a core offer for their pupils and prioritise offering squash over other sports to add variety for young people.

”A key priority for Off the Wall Squash has been to increase the number of girls participating and address the gender imbalance that exists within so many sports.

“Schools must enter two boys and two girls per team which means they have to have girls. If schools don’t enter girls, they can’t play.”

The Roman Cup has also led to the team scouting and nurturing the most promising talent from the competition.

“Thanks to some funding from the East Regional Forum we have been able to run a free six-week course for some of the most talented Roman Cup players – our Rising Stars,” said Selby.

“We invited one girl and one boy from each of the primary schools who competed in the Autumn, and the positive response rate was over 80%. We are very optimistic that many of them will become regular squash players and perhaps even future champions.

“Of the 140 who take part in the Roman Cup, we’re retaining 25 of them on a regular basis – which doesn’t sound like much, but if you’re doing that twice a year, every year, it snowballs.

“Our biggest problem now is capacity. We don’t have any more courts and finding coaches available during the day time is also proving challenging.”

Off the Wall Squash hopes the competition model will inspire other coaches and clubs to emulate their success and attract and retain players.

“We’re not necessarily saying we’re the best and it’s the best model, but it seems to be working, so if we can help others to get it working, that would be really beneficial.

“People just don’t know how good a sport squash is. The more people we can expose to squash and show them what a good sport it is the better. Squash is amazing and we need to make people realise that!”

Pictures courtesy of Off The Wall Squash and PSA