Alan Thatcher October 12, 2019 No Comments on Husband and wife Ali Farag and Nour El Tayeb aim for another historic double 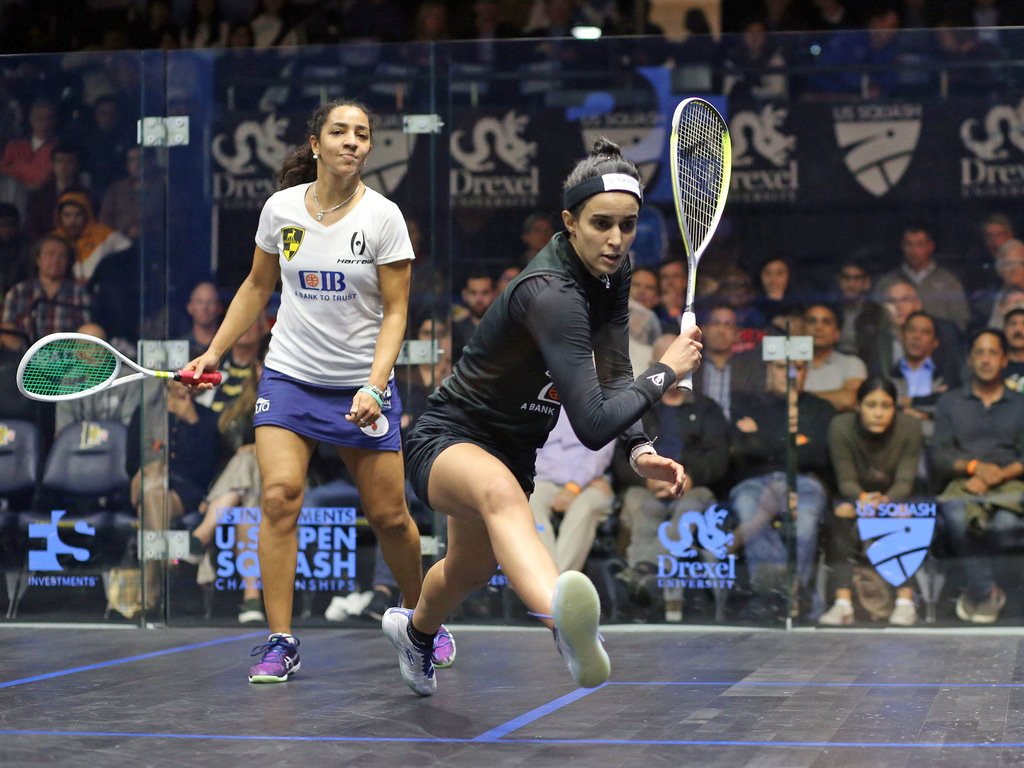 Two years on from their historic title triumphs at the FS Investments U.S. Open Squash Championships, married couple Nour El Tayeb and Ali Farag have once again reached the finals of the PSA Platinum event as all four semi-final clashes went the way of Egyptian players at Philadelphia’s Drexel University.

El Tayeb and Farag became the first married couple in sporting history to win the same major sports title on the same day when they won their first major titles in Philadelphia in 2017.

They now have the opportunity to repeat that feat after wins against women’s World No.1 Raneem El Welily and Peru’s Diego Elias. El Tayeb beat El Welily in that U.S. Open final two years ago, and the pair were meeting for the third time in as many tournaments after sharing the spoils in the China Open and Oracle NetSuite Open finals last month.

El Welily dismantled El Tayeb in just 23 minutes in the final of the Oracle NetSuite Open, but the 30-year-old saw her title defence come to an end after a masterclass of attacking squash from El Tayeb saw the younger Egyptian come out an 11-8, 11-9, 11-5 winner, marking the first time she has ever beaten El Welily in straight games.

Playing squash at a phenomenal pace and having the courage and confidence to constantly look for winning shots, 26-year-old El Tayeb was delighted with the result. She revealed: “I watched our last match from San Francisco this morning.

“I was shocked. I didn’t think I was doing a lot of things badly, but she was just unbeatable and took every chance. Today, I was laughing. When I was 6-4 up in the first game I thought ‘Yes, I’ve taken more points than I did last time’.

“Last time the most I scored was five, so after I took the first game I thought ‘Wow, I’m in this and it’s not like last time’. I was talking to Ali before the match, and I was in a good mindset and felt less pressure. 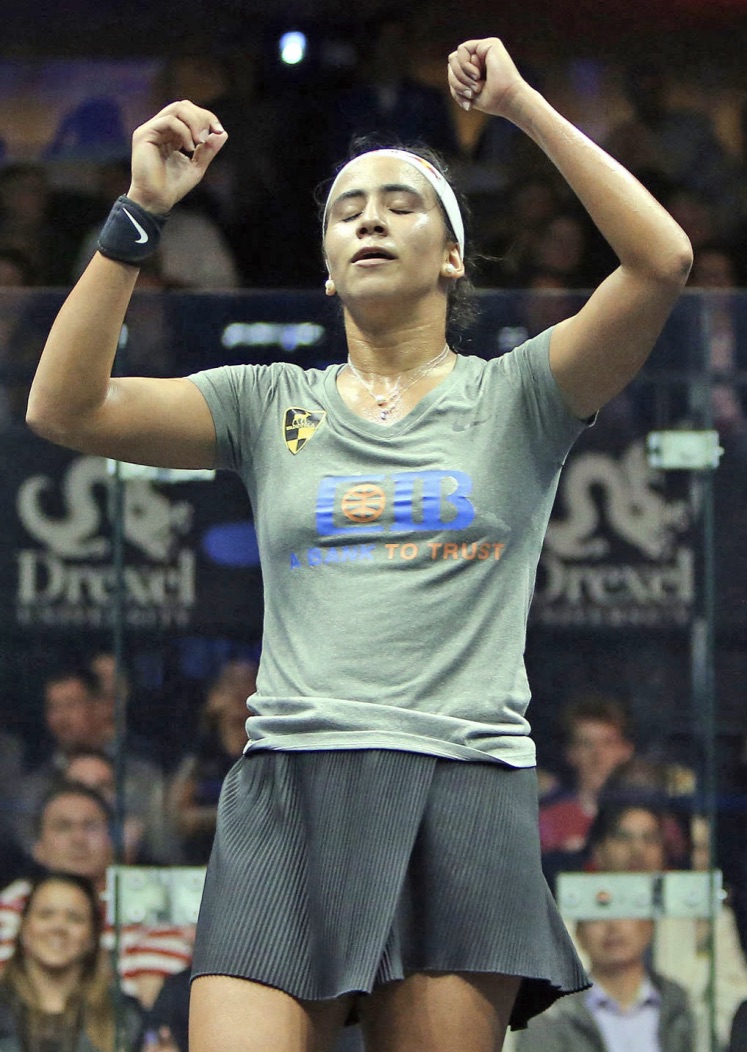 “It’s a pity it’s the semi-final because I want to play Raneem in a match like that in the final because this is it and you want to beat Raneem and go home, but I need to forget about this match now and focus on tomorrow.”

Her final opponent will be World No.5 Nouran Gohar (pictured) after an onslaught of hard-hitting squash saw her dispatch 2016 winner Camille Serme in a repeat of May’s British Open final.

Gohar, the only one of the women’s semi-finalists that hasn’t won the event, lost to Serme at the same stage of June’s PSA World Tour Finals, but this time around the French player had no answer to the sheer power of Gohar’s hitting.

The 22-year-old from Cairo was relentless as she lived up to her ‘Terminator’ moniker, surging to an 11-4, 11-6, 11-4 victory to book her spot in a third successive Platinum final.

“Before playing here, I was thinking yesterday that all the semi-finalists are U.S. Open champions and I’m the only one that isn’t,” said Gohar.

“Nour is the player to beat. She has been chopping everyone now and she’s playing really well. I’m excited about tomorrow’s match. I think it will be a great one with a lot of contrast. She likes to slow it down and plays really good shots. I like to hit hard so it’s going to be interesting and challenging, but I’m looking forward to it.” 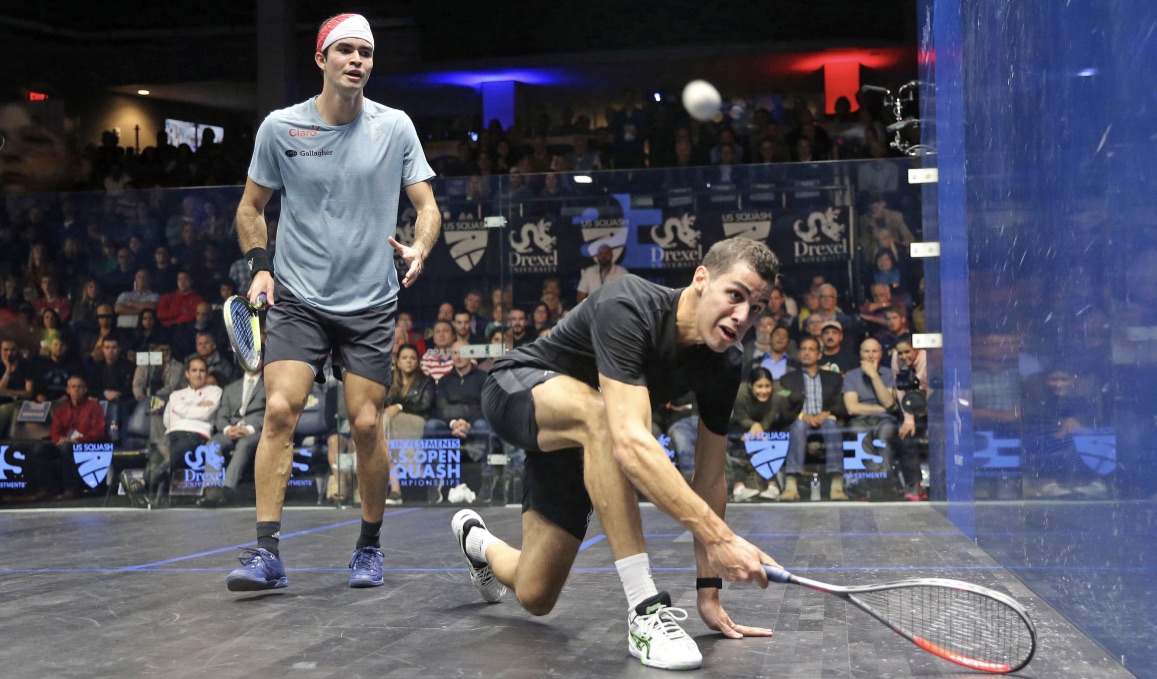 Ali Farag stretches for the ball against Diego Elias of Peru

The men’s final will pit Farag up against World No.2 Mohamed ElShorbagy in a repeat of the 2017 title decider. Farag got the better of Peru’s Diego Elias in straight games, while ElShorbagy matched that scoreline against fellow Egyptian Tarek Momen.

Farag will now appear in a seventh successive Platinum final after a composed display from the 27-year-old saw him overcome Elias by an 11-9, 11-6, 11-8 scoreline.

“If leaving the room today you would have told us that we [Farag and El Tayeb] would be leaving with two 3-0 wins tonight, I wouldn’t have believed you,” Farag said.

“He is one of those players that has so much skill in his racket, but then when he loosens up it’s even more. You could see he was firing nicks at the end. I don’t think I did much wrong, maybe I took my foot off the gas, but it’s all credit to him and I’m happy to close it down in three. We will both have solid opponents in the final now. We’re going to give it our best and if we walk away with another repeat of 2017 then we would be very happy.” 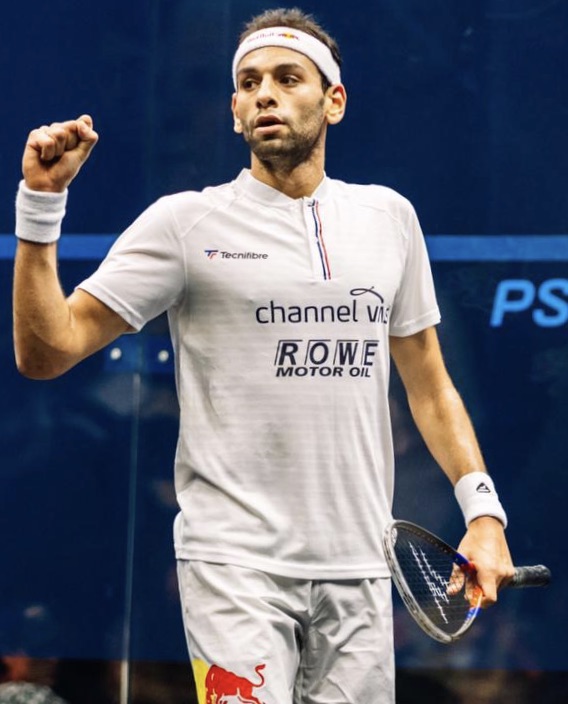 Farag and ElShorbagy played each other in the China Open final last month, with ElShorbagy winning on that occasion, while he has won 11 of 18 matches against the current World No.1.

ElShorbagy (pictured), a three-time U.S. Open champion, will line up in a fourth successive final in Philly after he disposed of Egypt’s Tarek Momen in straight games.

Despite some tenacious retrieving from Momen, ElShorbagy dominated the ‘T’ in a powerhouse performance to follow up his victory over the World No.3 in last week’s Oracle NetSuite Open title decider, winning 11-8, 11-9, 11-3.

ElShorbagy and Farag are currently locked in a battle for the World No.1 spot and the former sent out a stark warning sign to Farag ahead of tomorrow’s fixture.

“It would mean so much to have a shot at winning the U.S. Open title for the fourth time, but I’m up against the best player in the world right now,” ElShorbagy said.

“I’m after him and I want his ranking, but he had an unbelievable season last season, and I think it’s fitting that the first Platinum tournament of the season we have the World No.1 and No.2 in the final. Hopefully it’s a good match in front of everyone.”

If anyone is in any doubt about why Egyptian players are dominating world squash, the evening’s spectacular display of powerful, attacking squash provided plenty of clues.

The finals begin today, coinciding with World Squash Day. Coverage will be broadcast live on SQUASHTV (rest of world), Eurosport Player (Europe only) and the official Facebook page of the PSA World Tour (Indian subcontinent only).

Clubs around the world will be tuning in and hoping for two entertaining finals as Farag and El Tayeb aim to repeat their marital master-class.