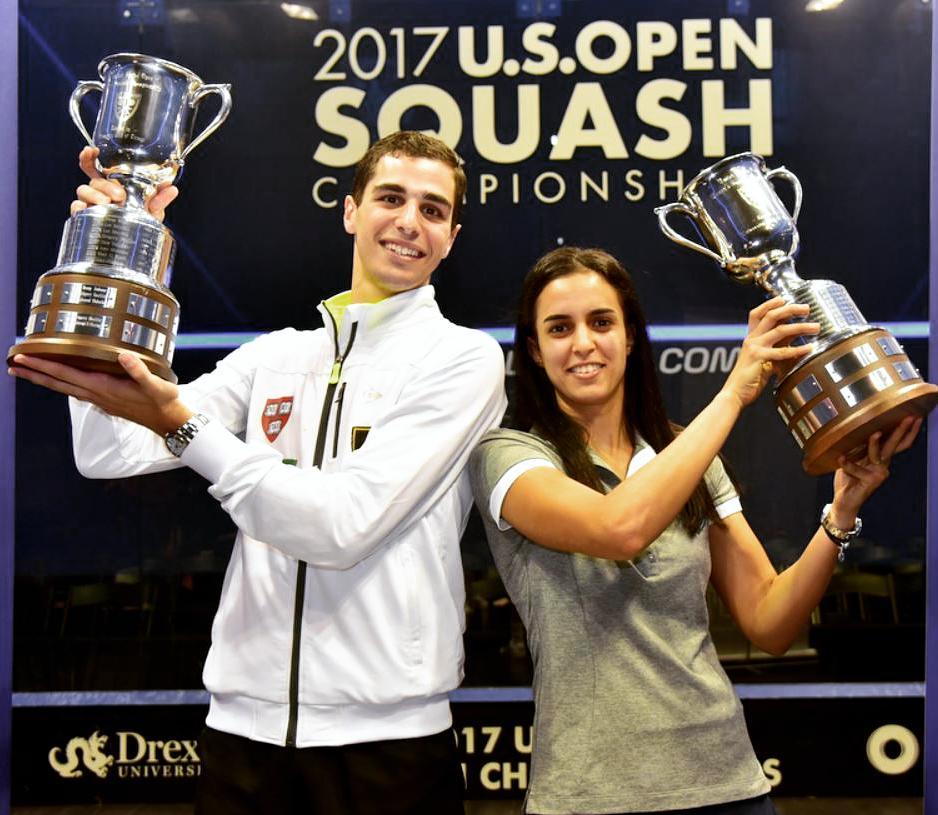 Egyptian couple Ali Farag and Nour El Tayeb wrote their names into the history books earlier today (October 14) as they triumphed at the 2017 U.S. Open Presented by Macquarie Investment Management to become the first married couple in sporting history ever to win the same major sports title on the same day.
Competing inside Philadelphia’s Drexel University the duo, who married last summer, defied the odds to defeat higher seeded and higher ranking opposition to secure the titles, the first PSA World Series titles of both of their careers.

After felling World No.1 Nour El Sherbini and World No.4 Laura Massaro to reach the title decider – her first appearance in a major final since losing the 2015 iteration of the U.S. Open – El Tayeb continued to play some of the best squash of her career to defeat compatriot and World No.3 Raneem El Welily in a breathtaking five-game affair that saw her twice come from a game behind to take the spoils.

“I’ve been dreaming about it and working really hard for the last two and half years,” said El Tayeb. “I’ve been improving every single tournament – it feels amazing to back-up wins against top four athletes – it’s amazing and I hope this is just the start.

“As soon as I finished my match, I just wanted to watch him and I was so nervous. It’s a dream – I see him every day working hard so it feels really special that both of our first World Series titles happen to be together.”

Meanwhile, Farag produced a masterclass performance to dethrone 2016 title winner Mohamed ElShorbagy, the World No.3 who reigned supreme atop the World Rankings from over two years, in straight-games, securing his first major title and firmly establishing his credentials as one of the elite players on the men’s circuit.

“It’s a dream, especially that we have done it together on the same night,” said Farag. “We couldn’t have asked for a better week and I hope it’s the first of many to come together.

“I always believed in myself and this win is going to make me believe even more and hopefully I carry this momentum into future tournaments. I can enjoy it tonight and then tomorrow I have to forget about it and move on.”

El Tayeb has been in blistering form all week beating compatriots Kanzy Emad El Defrawy, Salma Hany Ibrahim, top seed and World No.1 Nour El Sherbini and England’s World No.4 Laura Massaro in the semi-final in a stylish performance.

Experience was in favour of her opponent, however, with World No.3 El Welily winning five of the eight previous encounters between the pair and holding four World Series titles to her name, compared to El Tayeb who was targeting her first World Series title.

El Tayeb – who lost in the 2015 final to Massaro – was up against it from the start as El Welily took the first game, before El Tayeb responded with the kind of flair that the crowds inside Philadelphia’s Drexel University had got used to seeing from the World No.14 all week to level the scores.

Momentum continued to shift between the Egyptian duo as El Welily played with patience to take the third, whilst El Tayeb looked slightly unsettled as she made uncharacteristic errors. However, the 24-year-old soon fought back to take the next two games and seal her first World Series title.

“I have pictured this moment for the past three years. I have slept on it and thought to myself ‘I hope one day I can win a major title’ and to be honest, I didn’t think it would happen here.

“Just before I came here I was telling my coach that if I want to win here then I have to beat so many top players and I still can’t believe I’ve done it.

“In the 2015 final I was very nervous and after that I couldn’t do better because I was injured for six or seven months but that time out taught me how to enjoy the game. I just want to thank my coaches back home – Haitham Effat – who has been my coach for ten years. He believed in me when nobody did and I didn’t believe in myself. Hossam Nasser who has added bite to my game and my fitness coach Ali Ismail.”

Farag had just seen his wife crowned the women’s U.S. Open champion before stepping on court for his match and the 25-year-old made sure to join El Tayeb in the squash history books and leave Philadelphia a happy couple, seeing off former World No.1 ElShorbagy in straight games.

It was a tight opening game between the two Egyptians as they both forced each other into all four corners of the court with points constantly being exchanged between the pair. However, Farag – who had beaten France’s Lucas Serme and compatriots Mazen Hesham, Fares Dessouky and Omar Mosaad en route to the final – held his nerve to take the advantage and put two-time U.S. Open champion ElShorbagy up against it.

There was more intense squash and tension on court to follow as ElShorbagy took a 9-8 lead only to have a conduct stroke awarded against him which allowed his opponent back into the match and take a vital second game to double his advantage.

As the third game wore on, the defending champion began to look more rattled as Farag had momentum in his favour and sealed his first U.S. Open title by a 12-10, 11-9, 11-8 scoreline in 49 minutes.

“It feels unreal,” said World No.5 Farag. “People think it’s an individual sport but it’s far from it. We have so many people around us that help us to reach where we are today and the two people I want to thank the most are my parents. They have done amazing stuff throughout my years and I dedicate this trophy to them.

“I know the next battle against Mohamed is going to be even tougher but I really enjoy playing against him and the whole Egyptian contingency has been doing really well, which we are all proud of.

“I just moved to Wadi Degla and Karim Darwish, the Sports Director, there has been helping me a lot in the past couple of months and I knew it was going to pay off at some point, but I didn’t know it was going to be that quick so I really want to thank him for that.

“I want to thank my brother, who has been my role model since I can remember, I got to a point when I was going to quite squash and he was the one that brought me back to it.

“I also want to thank the Harvard coach, Mike Way, and the entire Harvard team – they have been following me and I really thank them for that. My fitness coach – Hossan Sahedad – I have played so many brutal matches this week and without him there is no way I could have got through them.

“I was hesitant about whether I was going to play this tournament because I had a niggle in my knee but if it helps then I’m going to carry a niggle every time I go into a tournament from now on!

“It’s a dream, especially that we have done it together on the same night and we couldn’t have asked for a better week and I hope it’s the first of many to come together.”