Alan Thatcher October 8, 2018 No Comments on Husband and wife feel at home in Philadelphia as they begin US Open title defence 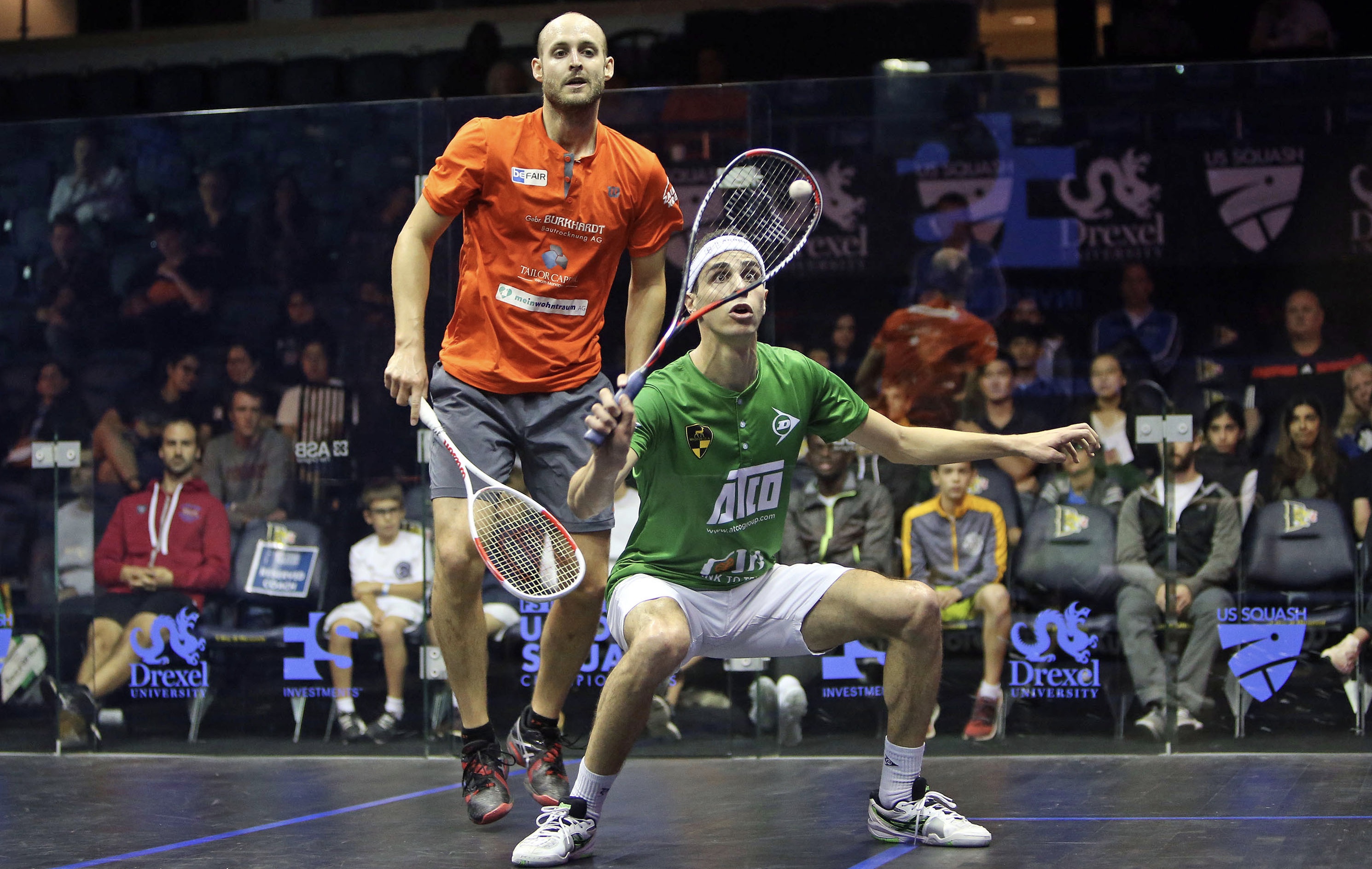 Defending champions Ali Farag and Nour El Tayeb got their title defences under way with victories in round two of the FS Investments U.S. Open, the PSA World Tour Platinum event held at Philadelphia’s Drexel University.

Farag and El Tayeb etched their names into the history books at last year’s tournament as they became the first married couple in sporting history to win the same major sports title on the same day, and World No.2 Farag began his title assault at the 2018 instalment with a 3-0 win over Switzerland’s Nicolas Mueller.

“It’s never easy to start off against Nicky,” said Farag. “He’s a very tricky player and he’s very dangerous at the front of the court, so I had to keep my mettle and keep it (my shots) deep in the corners because I know that if I leave it at the front then I can’t really read him because he’s got all of those trick shots.

“One or two of those games could have gone either way, so I’m happy to get off with a 3-0 win.”

Farag will take on Welshman Joel Makin for a place in the quarter-finals after he toppled Frenchman Mathieu Castagnet, while World No.1 Mohamed ElShorbagy began his tournament with a comfortable 3-0 victory over United States men’s No.1 Todd Harrity. 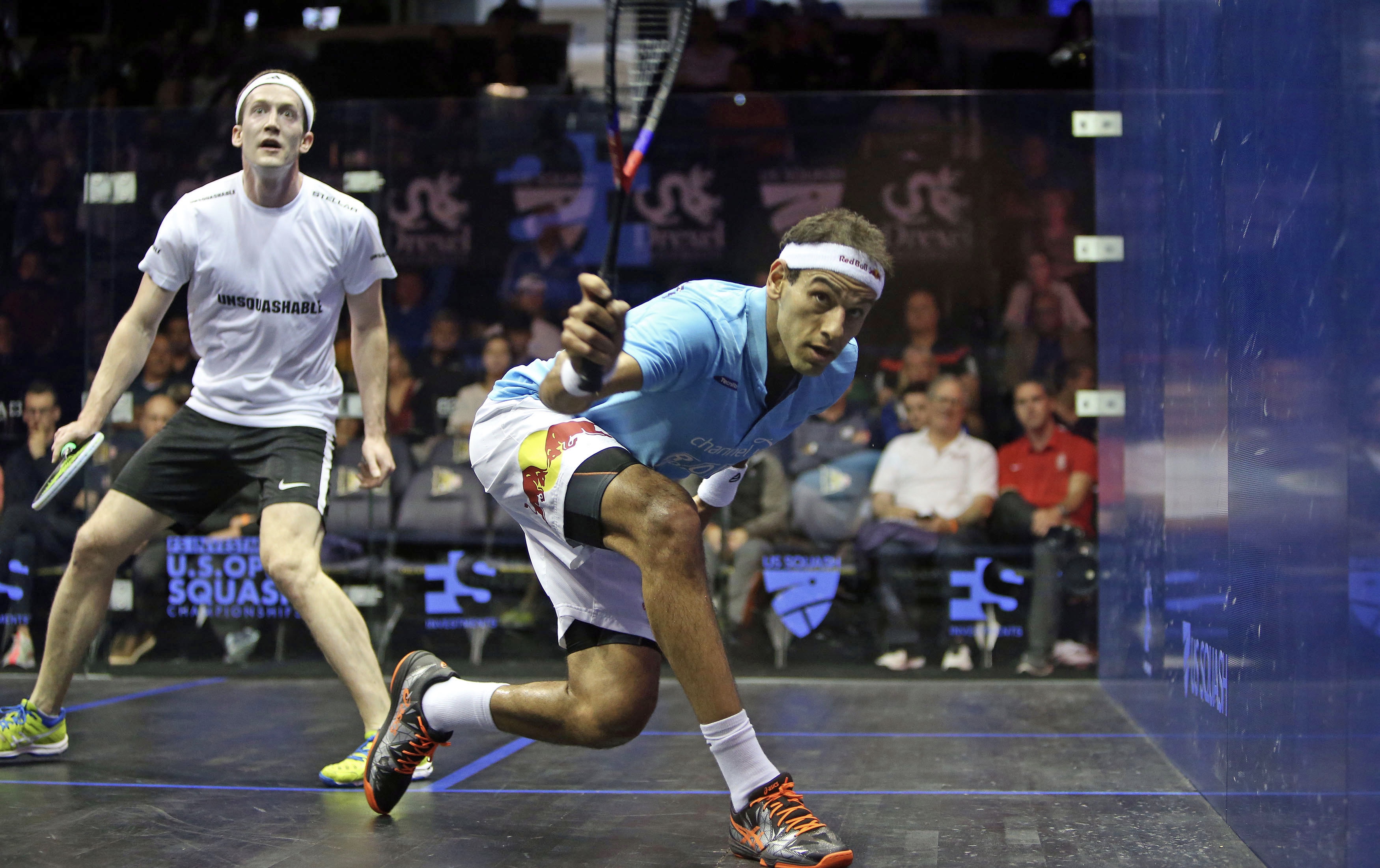 ElShorbagy, a two-time U.S. Open champion, lost out to Farag in last year’s title decider, but he laid down a marker for the rest of the tournament as he downed training partner 11-6, 11-4, 11-4 Harrity in just 27 minutes.

“I have played in three finals here and won twice. This is also where I got to World No.1 in 2013 when I won the tournament, so I have good memories here and I really hope that I can keep that momentum going and hopefully I play another good event here.”

ElShorbagy will play World No.11 Saurav Ghosal in the third round, where he will be joined by fellow Egyptians Tarek Momen and Karim Abdel Gawad, who defeated former World No.1 James Willstrop and Greg Lobban, respectively.

Willstrop, once again, delighted the crowds with his familiar favourite shot, the fake and hold, as he sent a straight drive shooting down the wall after bamboozling his opponent.

Just too good from @james_willstrop!!🔥

In the day’s longest match, World No.20 Declan James came back from 2-0 down to defeat fellow Englishman Adrian Waller 16-14 in the fifth game of a marathon 101-minute spectacle. After saving five match balls, his reward is a third round matchup with 2016 World Champion Gawad.

James revealed on Twitter: “Dug deep today to come back and get the win. It’s the days when you aren’t at your best and still find a way that count, even if you have to go the trenches.”

For many Britons, it was a kind of US-style Brexit as Daryl Selby, Tom Richards, Chris Simpson, Nathan Lake and Scotland’s Greg Lobban all packed their bags.

Makin and George Parker, however, continued their run of success. Makin lost the first game but recovered strongly to win the next three against Castagnet 15-13, 11-9, 12-10 in 86 minutes to land a dream draw against Farag, while Parker beat Hong Kong’s Tsz Fung Yip 13-11 in the fifth game to set up a third round battle against Germany’s Simon Rösner, who accounted for Selby 3-2.

Selby said: “Of course I was gutted to lose a match in five, but I was happy with a decent performance for my first PSA World Tour match since May. Hopefully I won’t have to play Simon again in 2018!”

“I had the plan to up the pace from the beginning, but I struggled to do that in the first and fourth game. I know that if I play that pace with Daryl then it is very difficult to beat him. That’s the pace he likes to play at and I was a bit scared to go to the front and finish off the rallies as I did in the second and third game.

“Once the ball softened up a little bit and it didn’t bounce as much then it started to get better from my point of view but as you could see in the fourth he came back, even though when I was 2-1 up I thought I saw him getting tired and slower on court.

“I hoped that it would continue like that in the fourth but he came back and got that game so I was glad that I came out in the fifth and got a few good rallies to get a nice lead and then managed to keep going.” 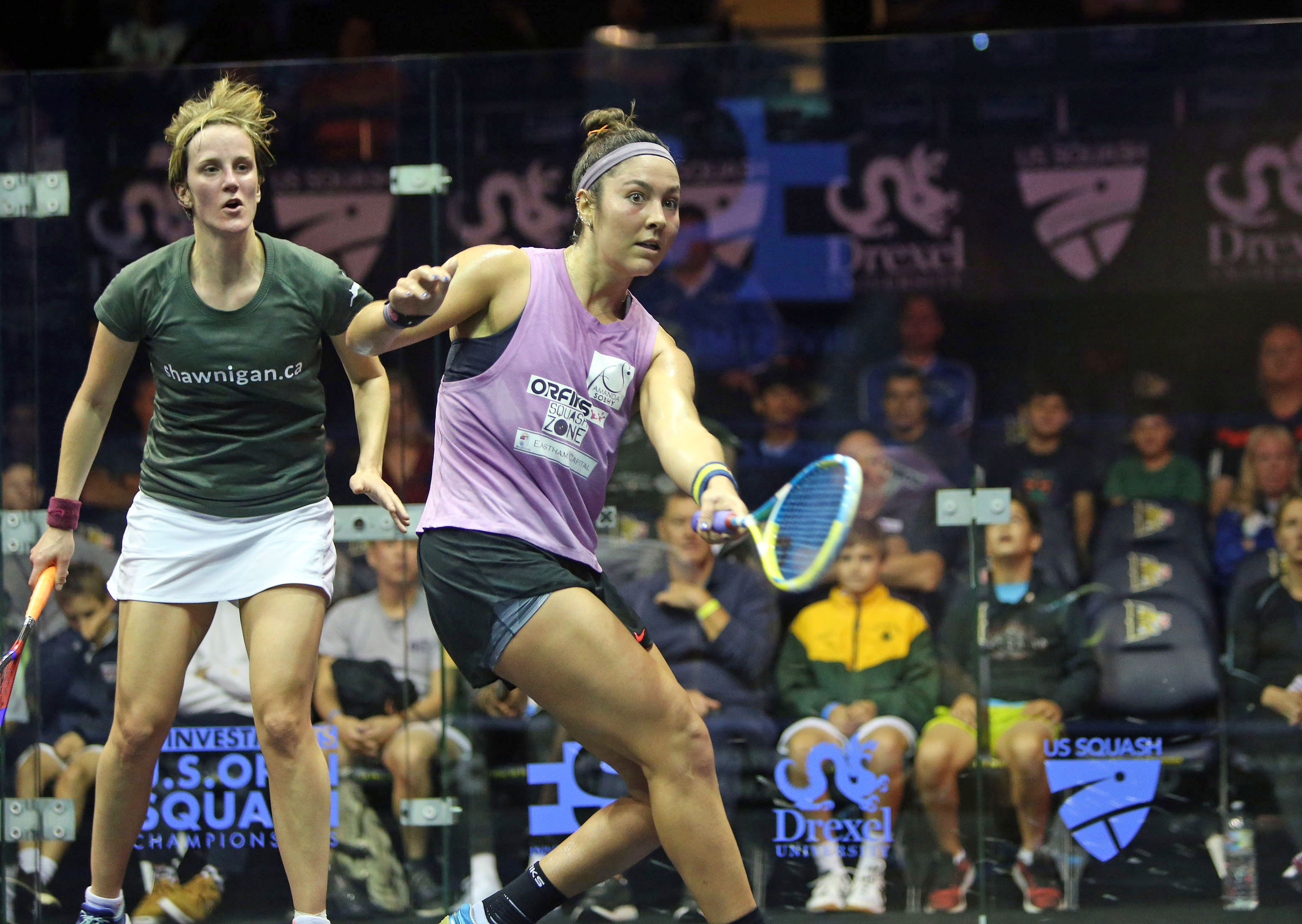 Amanda Sobhy steps up the pace against Victoria Lust

World No.3 El Tayeb dispatched India’s Dipika Pallikal Karthik in straight games in the women’s tournament and she will line up against United States No.2 Amanda Sobhy in round three after she defeated England’s Victoria Lust 3-1.

“Lusty and I have played a lot of times,” said former World No.6 Sobhy. “We know each other’s game and I know how deadly she can be, but I was looking forward to getting into a solid match. She played really well so I really had to step up and play at that top level and I’m happy to win and move onto the next round.”

The leading American in the women’s game, World No.16 Olivia Blatchford, is also through to the last 16 after taking out England’s Emily Whitlock in four games and she will take on World Champion Raneem El Welily, who overcame the experienced Rachael Grinham. 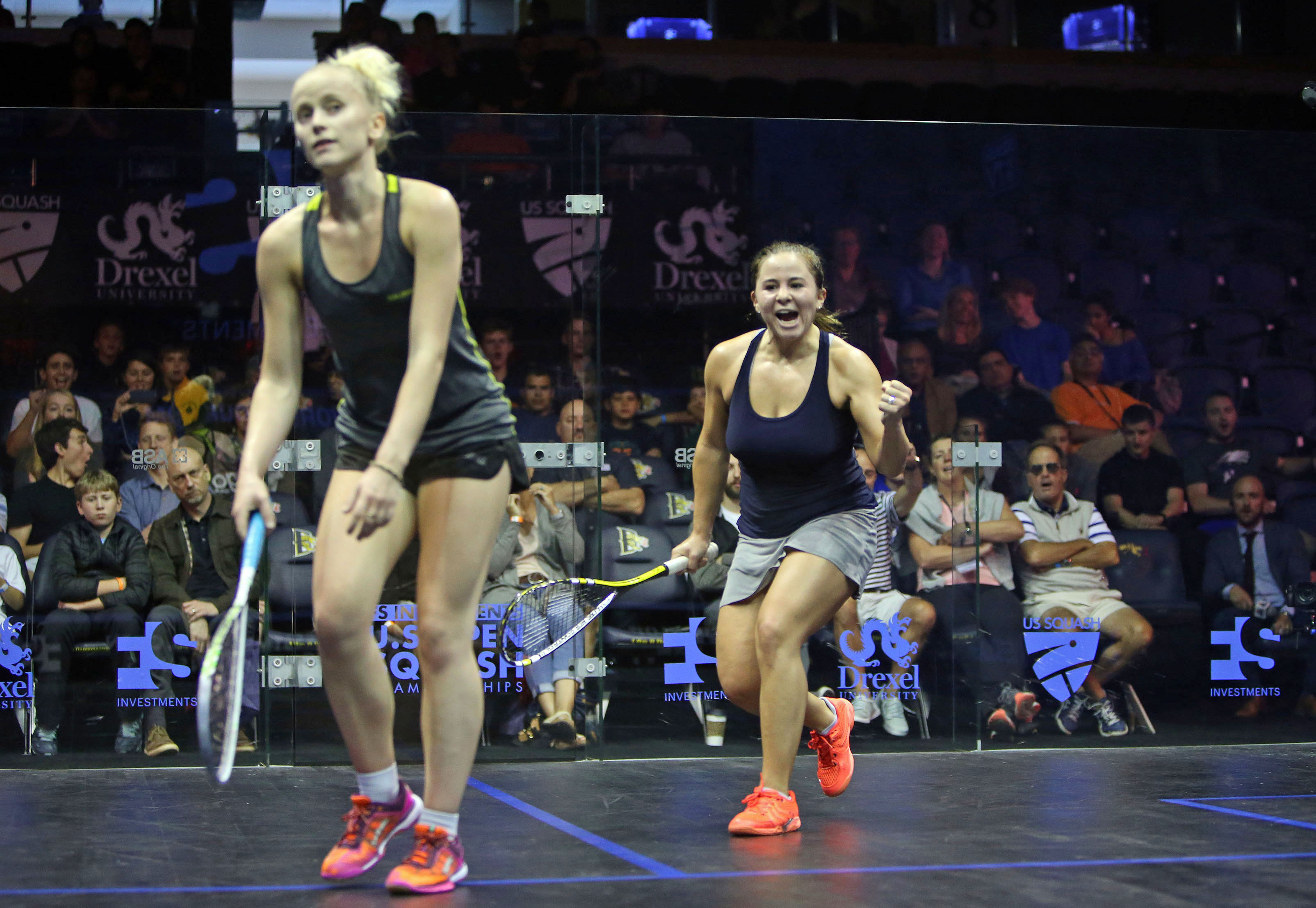 “Emily is a great player,” said Blatchford following her victory. “Our rankings are pretty much the same, so it’s completely evenly matched. She came out firing and it was all super close and to be playing Raneem in the next round here is awesome.”

World No.1 Nour El Sherbini began her tournament with victory over Hong Kong’s Joey Chan to set up a third round meeting with World No.9 Alison Waters, while World No.11 Nicol David and World No.6 Laura Massaro – who have five U.S. Open titles between them – will meet for the third tournament in a row and the 34th time on the PSA Tour after respective wins over Australia’s Donna Lobban and England’s Millie Tomlinson.

Massaro’s winning scoreline had an odd feel to it, losing the second game without scoring a point and then scraping home in tiebreaks in the third and fourth to win 11-6, 0-11, 12-10, 13-11.

World No.8 Sarah-Jane Perry also won on day two as she defeated Egypt’s Nada Abbas and she will play India’s Joshna Chinappa in the next round as the tall Englishwoman looks to follow up the Oracle NetSuite Open title that she won earlier this week.

The third round of the U.S. Open begins at 12:00 local time (GMT-4) on Monday October 8 and the action will be shown live on SQUASHTV (Rest of World), Eurosport Player (Europe only) and DAZN (Japan).