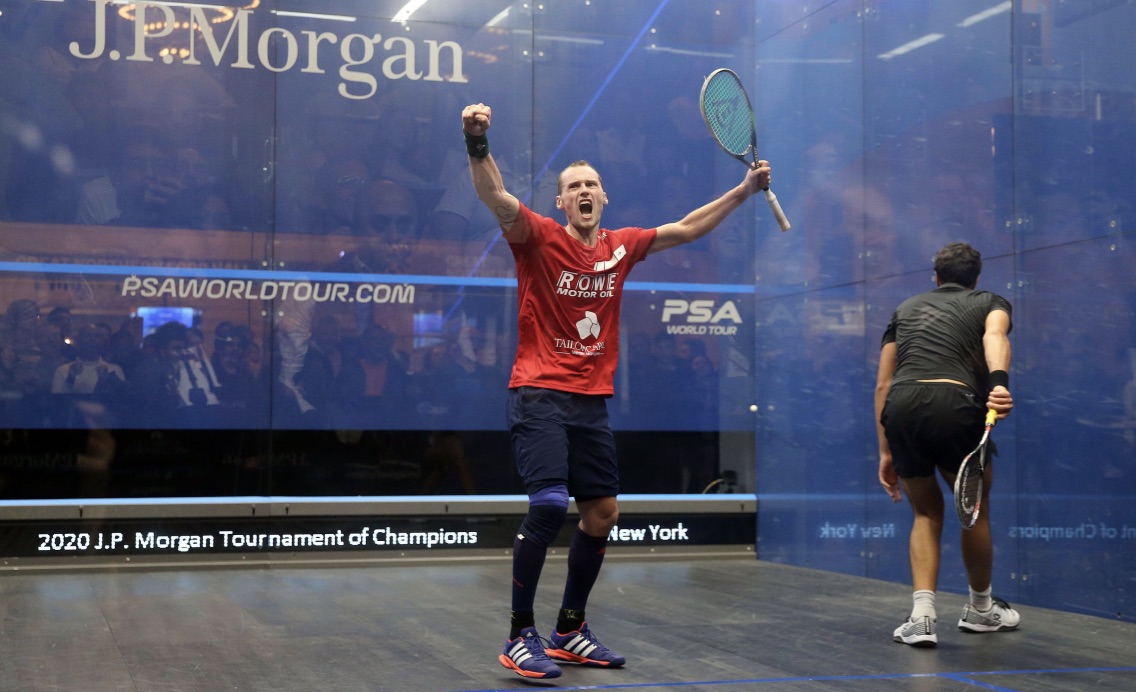 Jiving General will need to be on his toes as he faces Asal, half his age and a deadly danger
By SEAN REUTHE – Squash Mad Correspondent

Former World No.1 and World Champion Gregory Gaultier made a sensational return to the PSA World Tour after 15 months out of action through injury as the 37-year-old overcame Egypt’s Omar Mosaad by a 3-2 scoreline in the early hours of this morning to reach round three of the J.P. Morgan Tournament of Champions held inside New York’s iconic Grand Central Terminal.

Since joining the PSA World Tour in 2000, Gaultier has carved out a reputation as one of the most popular and charismatic players of the modern era, but a career-threatening knee injury sustained in late 2018 required two surgeries to fix, leaving Gaultier fighting to save his career.

He made a successful return to action during last month’s WSF Men’s World Team Squash Championship and followed that up in New York with a sublime victory over former World No.3 Mosaad to mirror his World Championship final triumph over the Egyptian back in 2015. He came back from 2-1 down and held his nerve in a tense decider to close out an emphatic win, with incredible, frenzied celebrations to match.

With three final appearances in Grand Central, including a title victory in 2009, Gaultier is one of the most prolific players to grace the Tournament of Champions, and he will continue his campaign against 18-year-old Mostafa Asal in the next round.

“It’s a dream, I’m like a kid again!” said Gaultier, who has fallen to No.543 in the rankings. “When you are broken for 15 months and you’ve got people telling you that you will never come back and you will never do any sport again in your life, I was like: ‘I think you’re talking to the wrong person’.

“I kept working hard and believing that I could make it. At some point I had to say: ‘let’s do it, let’s play’. I was training through the pain and then suddenly the pain started to settle down. It’s not quite there yet but I managed to play at a kind of decent level. I’m not at where I was two years ago but I think there’s a chance and I still have potential to come back and do some good things for squash.”

Ladies and gentleman… Gregory Gaultier is BACK with a bang! 😆

Asal will look to follow up a sensational display against World No.9 Mohamed Abouelghar which saw him come back from a game down to reach the last 16 in New York for the first time.

World No.21 Asal chose not to defend his crown at the prestigious Dunlop British Junior Open earlier this week in favour of playing this tournament. That decision looks to have paid immediate dividends as he put on a shot-making masterclass against his fellow Egyptian, hitting nicks from all angles as he closed out an 4-11, 11-8, 11-8, 11-7 win in 48 minutes.

“I want to thank the crowd, it was really amazing today,” said Asal afterwards. “It’s really tough to beat Abou, I didn’t expect that from the start. I’m happy that I made it. This is a dream court and I love to play here. I’m looking forward to my next match. The last two months I have hit a lot of nicks in my practice. I can’t believe that I won today and I want to thank everyone who supported me today.” 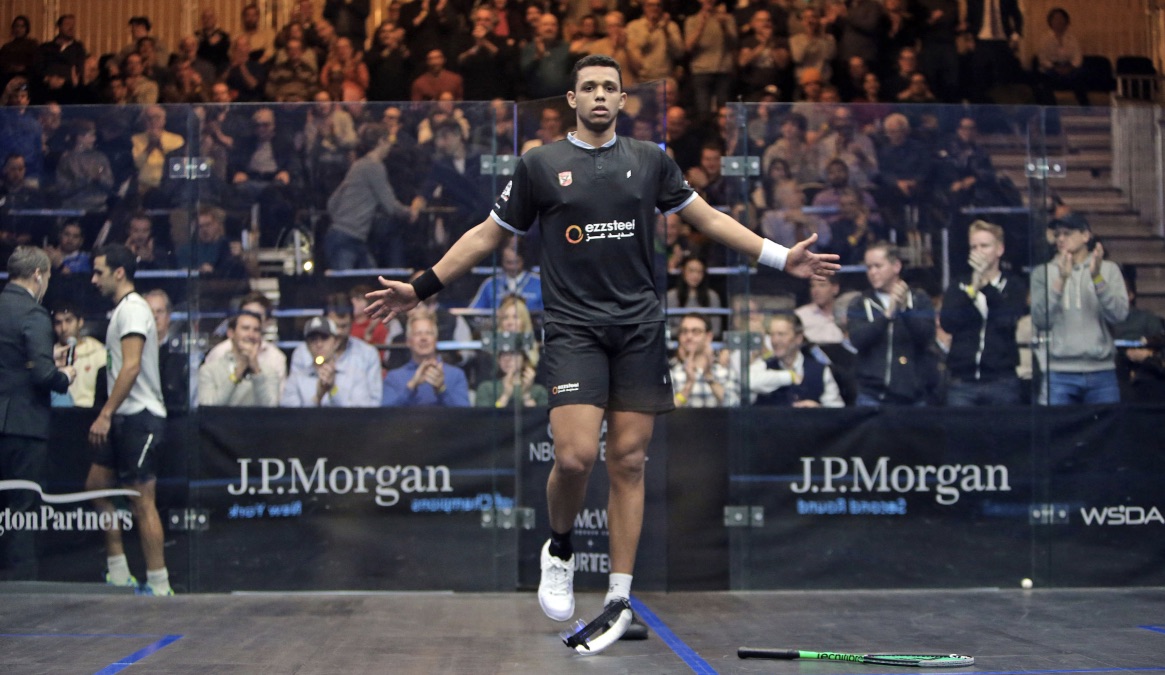 Meanwhile, World No.1 and defending champion Ali Farag was tested by World No.17 Mazen Hesham as he overturned a 2-1 deficit to keep his title challenge alive.

Farag’s triumph over Mohamed ElShorbagy 12 months ago saw him go to World No.1, but he was all at sea as Hesham showcased his attacking arsenal to put himself one game away from a shock victory.

However, the experienced Farag held firm to level the scores, and Hesham lost his focus mentally and ran out of energy in the fifth as Farag swept home to avoid a scare.

“I know Mazen well, he was No.13 in the world at the age of 21,” Farag said. “On the day he was the better squash player, and so I had to make it physical, but with physical [matches] you don’t want to turn into a machine. At the end of the third and the beginning of the fourth, I was forcing it rather than thinking it. I’m really glad I’m through because I could have been the loser today for sure.” 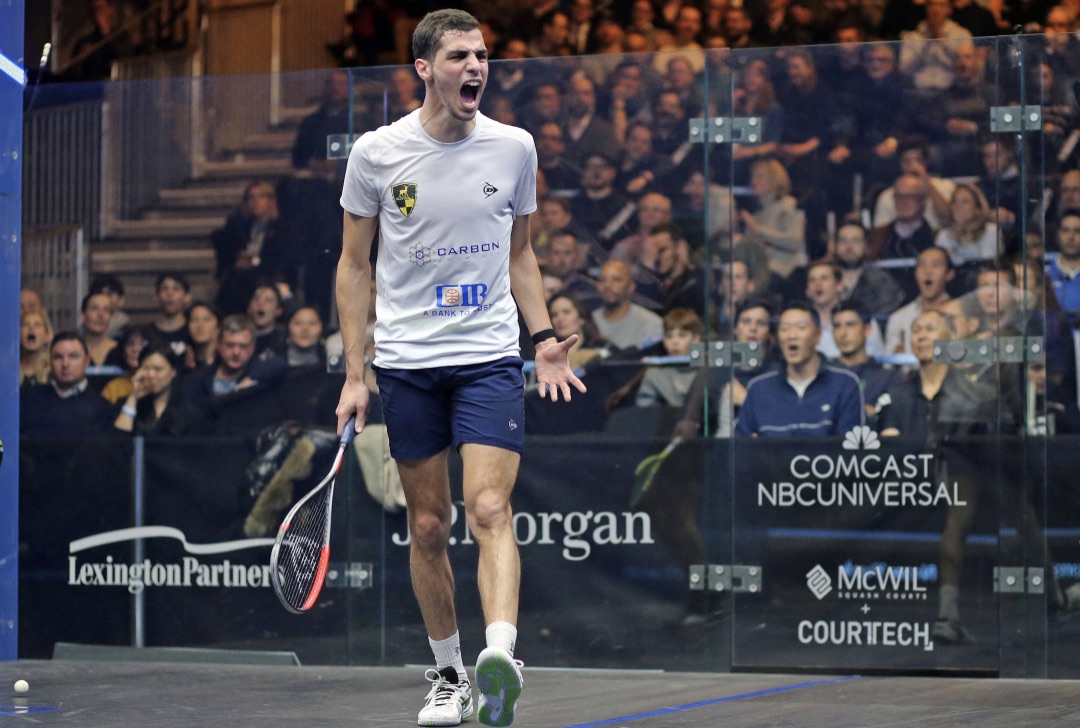 There were five US players in action, with New York-born Olivia Blatchford Clyne and Sea Cliff-based Sabrina Sobhy claiming wins at the Princeton Club.

Blatchford Clyne ousted England’s Jasmine Hutton in straight games to set up a last 32 clash with World No.9 Tesni Evans, while World No.39 Sobhy dispatched Hong Kong’s Joey Chan in four games to join older sister Amanda in the next round. 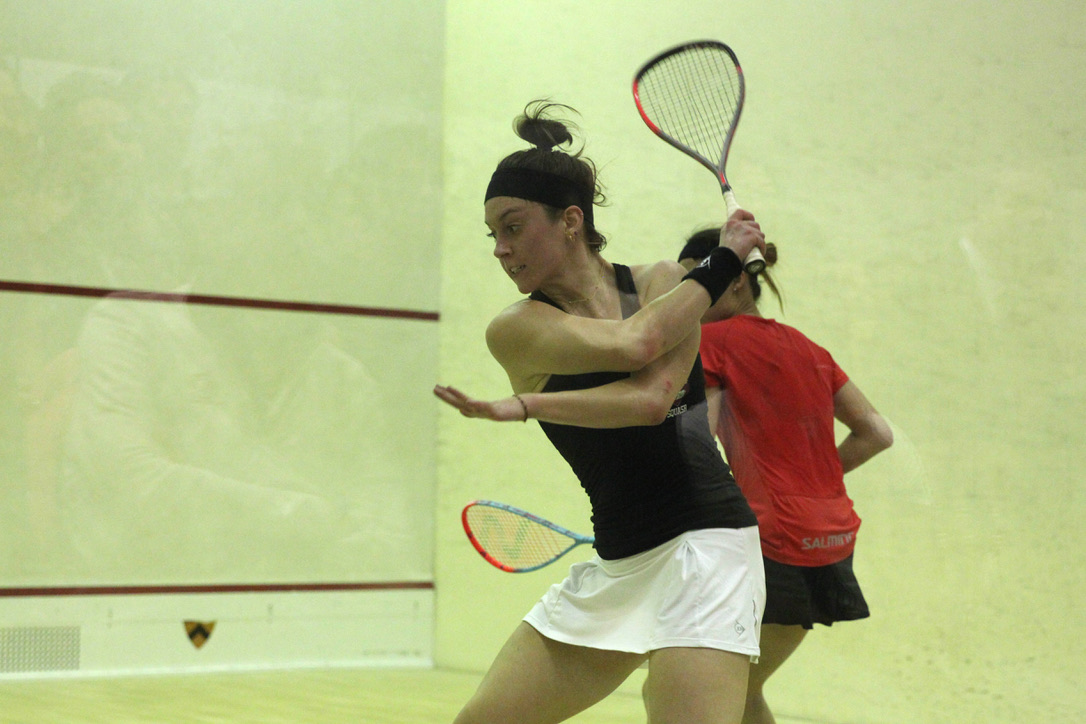 Sabrina Sobhy powers past Joey Chan at the Princeton Club

“I feel pretty overwhelmed right now,” Sobhy said. “I’m so proud of what I’ve been able to accomplish thanks to the support of my friends and family. Playing in front of them makes a win like this even more memorable. I’ve never really had a day off in a major tournament before. I have plans to go to the Metropolitan Museum of Art and I look forward to enjoying a change of pace.”

Round two action continues today, with play beginning at 12 noon local time. Matches from Grand Central will be shown live on SQUASHTV (rest of world), Eurosport Player (Europe only) and the official Facebook page of the PSA World Tour.

BRITWATCH: Tom Richards produced a brilliant finish to beat Hong Kong’s Leo Au 11-9 in the fifth after 76 minutes of high-quality squash from both players. Richards meets No.5 seed Paul Coll in the third round tomorrow (Sunday). In a busy schedule today, British No.1 Joel Makin (Wales) meets No.7 seed Diego Elias of Peru in what promises to be a match of stunning competitiveness.

An all-British battle sees James Willstrop take on Greg Lobban, while Declan James will be aiming to deliver a performance of the highest quality against Hong Kong’s Tsz Fung Yip.

As the women’s event got under way, Julianne Courtice dug deep to beat Malaysia’s vastly experienced Low Wee Wern 11-9 in the fifth in just under an hour of mental and physical combat. Her reward is a tie against No.6 seed Joelle King of New Zealand.

Report by SEAN REUTHE (PSA). Edited by ALAN THATCHER (tucked up in bed, three days after a hip operation).