The eight-time US National Champion narrowly edged New Zealand’s Campbell Grayson and Pakistan’s Farham Zahman, who finished second and third, respectively, to the title after picking up 545 points from six events. 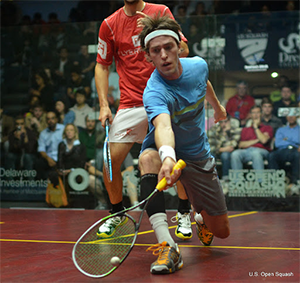 Victory at the Las Vegas Open in May, coupled with quarter-final berths at the Houston Open and NY Metro Open and last 16 spots at Indian Summer, NetSuite Open and Charlottesville Challenger events secured the title for the American number one.

“Winning the first ever US Pro Series is a big honour and I’m delighted to have topped the rankings this year,” said New York based 29-year-old (pictured right).

“This series has had a big impact on the North American squash circuit and I look forward to returning to the court in 2014 to defend the title.”

The U.S. Pro Squash Series has proved a resounding success in its debut year, with several top players competing for ranking points and prize funds ranging from $5,000 to $70,000. And with new events already added to the 2014 calendar, US Squash Vice President Conor O’Malley is optimistic about the future.

“With the first year of the US Pro Series coming to a close, it’s safe to say it’s been tremendously successful and already there are commitments of new events in great squash markets coming onto the 2014 calendar, meaning more squash fans will enjoy the tremendous squash being played on the Tour.

“For many years now, Julian has certainly distinguished himself as one of the most successful players in North American on the tour and earning the #1 ranking on the US Pro Series is another testament of his achievements.

The 2014 edition kicks off at the PSA International 70 Motor City Open in January, with Egyptian trio Mohamed Elshorbagy, Karim Darwish and Amr Shabana all set to feature.