James Bond loved his women, his cars … and his squash
By TED GROSS (Publisher of Daily Squash Report)

When Sean Connery passed away last week I dug out an old photo from the spring of 1965.

The father of one of the kids in my elementary school class owned the British Motors dealership in San Francisco, and one day a vehicle pulls up in front of the school.

Not a big deal, it was only the most famous car on the planet then, the Aston Martin DB5 from the movie ‘Goldfinger’, which had come out in the US in January.

So I emailed my old classmates and asked if anyone remembered that day, and a couple of them called it the best day of their life to that point.

Then of course Pussy Galore (played by the great Honor Blackman) was discussed, who multiple people pointed out she was our 5th grade class heartthrob.

One guy told an amazing story, of riding in the Aston Martin to a ranch in Napa that weekend.

“Mike Ashley drove Jeff and I up to Napa in the 007 car. Being a two seater, Jeff sat in the left side of the passenger seat and I sat half on his lap jammed in the right side of the seat against the center console. I remember when we stopped for gas, we put up the bulletproof screen.

“I’ll never forget that experience. I remember one thing that wasn’t in the movie, that being a drawer under the driver’s seat with moulded sections for a pistol and knives. Wow, was that cool!”

A little research shows that Mike Ashley was the UK sales manager for Aston Martin (not the sports chain owner), and brought the car to the US on the SS France in December of 1964 for a promotional tour.

Ashley confirmed in an interview with CNBC in 2010 that the car was a pleasure to drive and the gadgets worked perfectly. 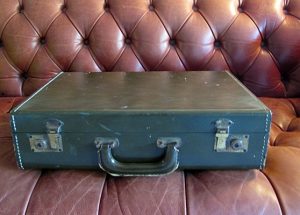 I still happen to have my school briefcase from back then – which, much more importantly, doubled as the Bond Attache Case.

I have to admit, the photo of the Aston Martin being surrounded by our class has aged well.

One of the ‘kids’ said yesterday: “It’s a priceless photograph. So much action and energy and focus.”

It was interesting to learn that Sean Connery was an enthusiastic squash player. A picture emerged on social media yesterday of him relaxing after a game in 1981 and in the caption he says: “It’s an exhausting but fascinating game. It’s probably one of the best games for keeping fit and, because it’s played inside, the weather doesn’t spoil the fun.

“That’s important from an actor’s point of view because he has to enjoy his sport at all sorts of odd times, fitting it in whenever possible.”

By ALAN THATCHER - Squash Mad Editor I am looking forward to speaking on March 5th at the online Squash Summit organised by the brilliant...
Read more