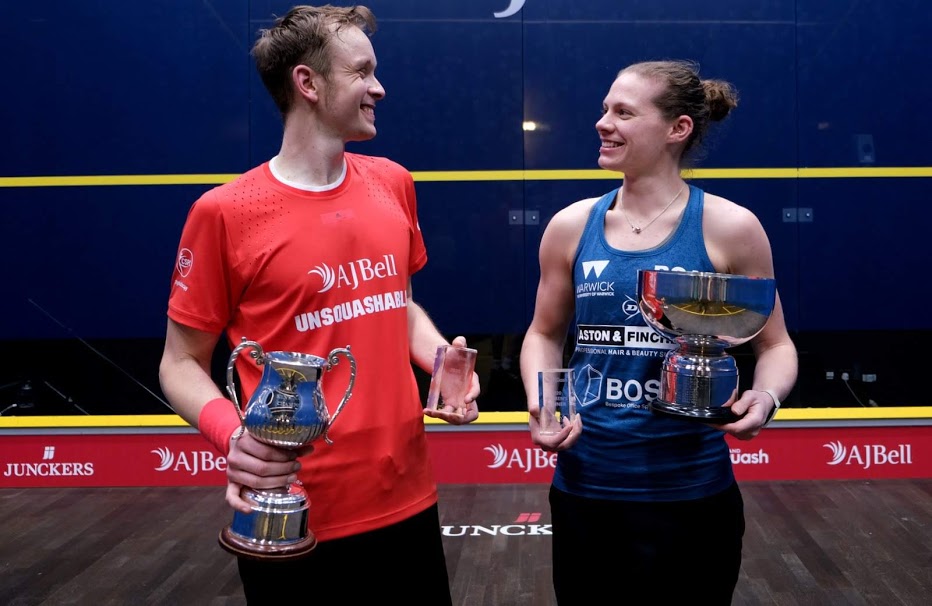 Second seed Willstrop’s triumphed in a gripping encounter as he beat Welshman Makin in four games, winning 12-10, 0-11, 12-10, 14-12 in 76 minutes. The second-game “bagel” could have been devastating to any other player, but Willstrop regrouped and regained control of large portions of the match to deny the .

The World No.18, despite a losing 3-2 head-to-head record against first-time finalist Makin, showed no signs of fatigue at 36 but it was the 25-year-old Welshman who started the brighter of the two.

Makin flew into a 10-4 lead for six game balls, yet somehow in his 11th final, Willstrop reeled off eight straight points to clinch the tie-break in 19 minutes.

Makin then won 11 consecutive points to level and showed his class in the third, coming back from 6-1 down to 8-8 .

However, energy spent in conversation with the officials gave Willstrop some crucial thinking time as he saved a game ball with his signature backhand drop shot before winning another tie-break in 22 minutes.

The heat turned up in the fourth, and a despairing Makin dive at 9-9, prevented a first championship ball for Willstrop only adding to the drama.

While Makin twice extended the match – forcing Willstrop into saving a game ball of his own – the Englishman proved too clinical third time around.

“To sneak in there at the end against one of the top players in world, I’m not sure how I was able to do it really,” said Willstrop.

“The British Nationals has prestige and history. Some of the greats have played it and to play and compete with someone like Joel who’s one of the top players at the moment is great.

“He’s incredibly hard to break down. The bagel in the second sums it up. That’s how hard it is to win a rally. He goes for everything and once I got 6-nil behind it seemed impossible.

“I came back though and it’s great to be able to compete at that level and win. It’s special anytime to win the Nationals but especially against a field like this!”

The 2015 champion and World No.7 Perry had experience, a higher ranking and a superior head to head over finalist Hutton, ranked 48th in the world who made the final after two straight withdrawals.

Perry’s imposing court presence and calm head on the tight points proved too much for the 2019 British U23 Open winner.

Hutton had a chance at 9-9 to earn a game ball, instead trying too much with a simple shot as Perry took the gift and promptly wrapped up the first game.

Hutton overcame a patchy start to the second to bring it back to 8-8 but Perry bagged two more game balls, the 29-year-old all over the second opportunity for another 11-minute game.

Hutton benefitted from two overrules in her favour in the third to lead 7-6 but three straight points from Perry, swiftly followed by some stunning Hutton winners and then costly errors, summed up the athletic youngster’s final as Perry prevailed in 35 minutes, winning 11-9, 11-9, 11-9.

“I’m really pleased to win a second National title because I’ve been stuck on one for a little while.

“Jasmine played fantastic. She came out with no signs of nerves and played some really fearless squash. She has improved so much in the past six, 12, 18 months.

“She is definitely pushing in that crop of young players trying to challenge the slightly older guard like myself. I am sure she will have many more finals.”