James Willstrop warms up for a Classic encounter at Canary Wharf

Alan Thatcher March 5, 2019 No Comments on James Willstrop warms up for a Classic encounter at Canary Wharf 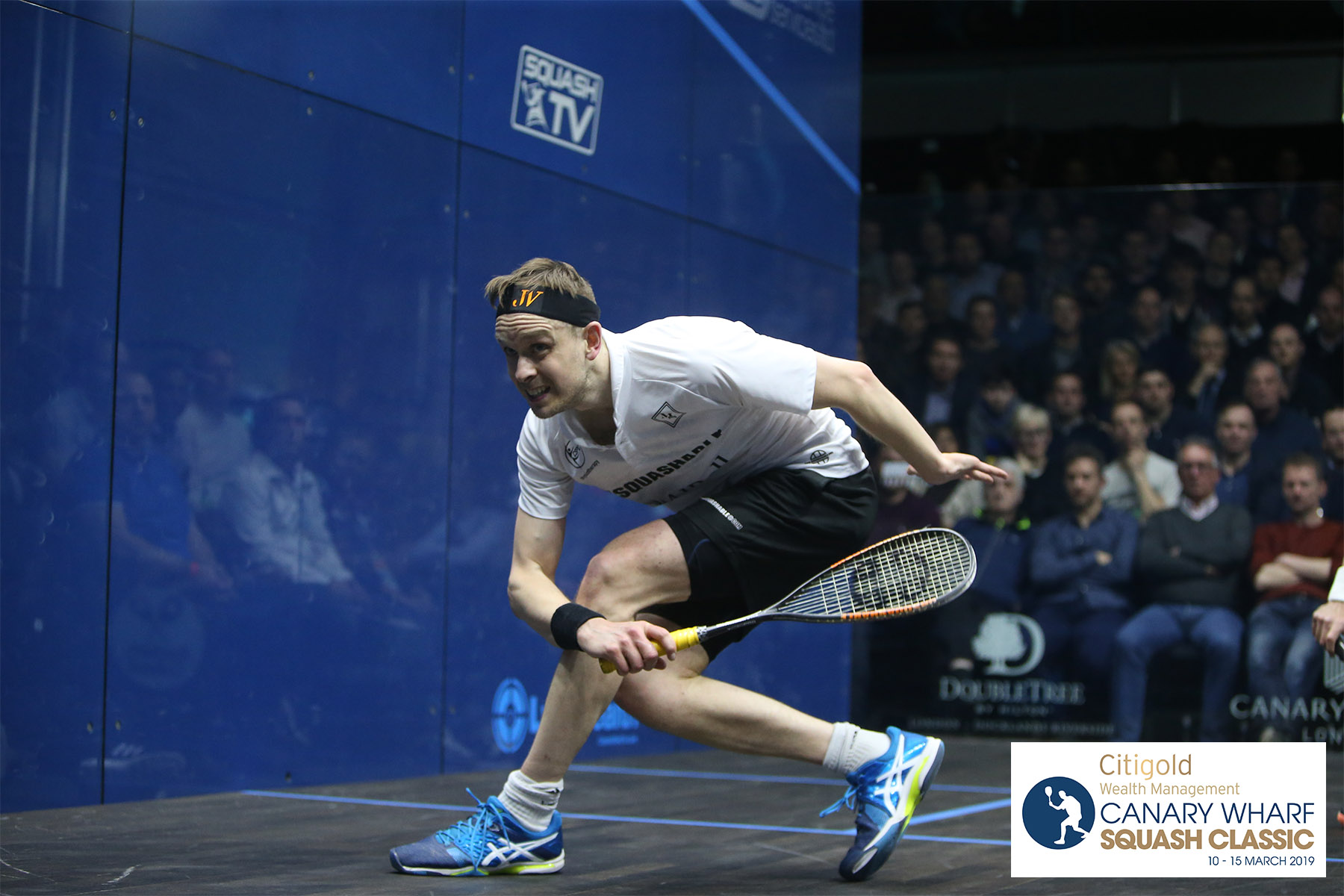 James Willstrop is looking forward to returning to Canary Wharf, one of his favourite tournaments

From best of seven to best of three, Willstrop loves innovation at Canary Wharf
By ALAN THATCHER

James Willstrop is one of the most experienced players on the PSA World Tour. At 35, he has travelled round the world many times and amassed an incredible knowledge of the game.

While admitting to being something of a traditionalist, he also welcomes innovation. And that’s why the top English male on the PSA Tour says he is looking forward to competing over a best-of-three games format when he lines up at the Citigold Wealth Management Canary Wharf Squash Classic held at London’s East Wintergarden.

He kicks off proceedings on Sunday with a mouthwatering Sunday lunchtime match-up against Egypt’s flamboyant and unpredictable Mazen Hesham.

It’s the perfect way to get London’s most popular tournament off to a flying start.

Willstrop won the inaugural Canary Wharf final back in 2004, beating Thierry Lincou in a best-of-seven showdown after the tournament had introduced playing earlier rounds with PAR scoring to nine points.

He has been virtually ever present at the PSA World Tour Gold event since then, missing only year and adding a further three titles to his collection in seven final appearances.

The Canary Wharf Classic has been a hotbed of innovation down the years, with developments such as video referees and the one-referee system currently in use on the Tour being tested at the tournament. This year’s event will see a best-of-three games format trialled up to and including the quarter-finals for a second successive year. The semi-finals and final then revert to a best-of-five format. 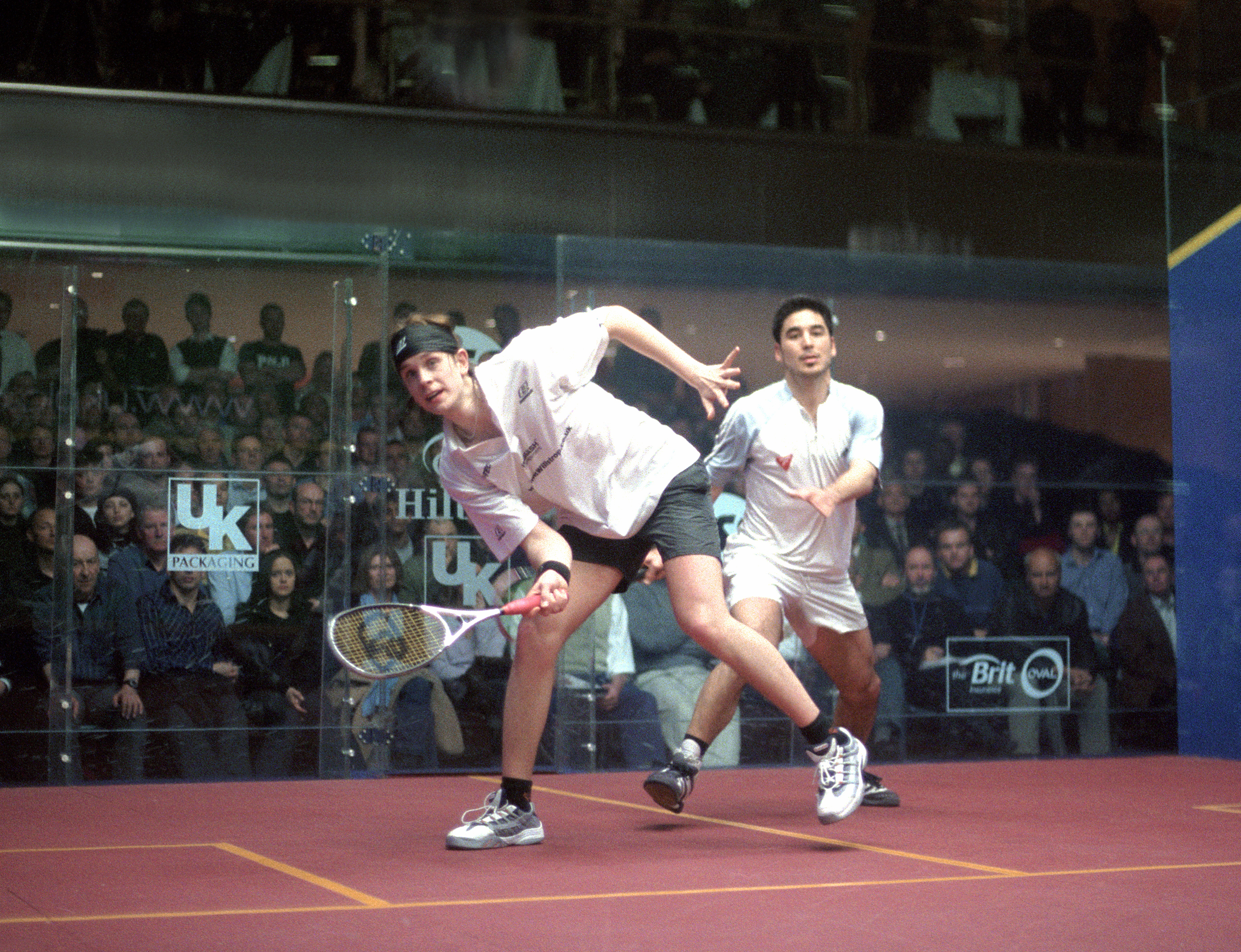 Down memory lane: James Willstrop and Thierry Lincou in action in the 2004 Canary Wharf final (best of seven)

Willstrop is a fan of the format and believes it could help the sport appeal to a new audience.

“I’m very for it [best of three],” said Willstrop, a Commonwealth Games gold medalist in Gold Coast last summer. He cites the different playing formats for world-class cricket, where the shorter T20 game has generated fortunes for the sport by attracting huge audiences and even larger TV rights, especially in India.

He added: “I’m not saying the whole game needs to change to best of three. I don’t know whether that’s the right thing at all, but every sport seems to have different formats and I think cricket is a great example.

“New and innovative formats have really helped the game appeal to a different set of people, and I think that we would be very silly not to keep doing it as an idea. I’m also along the traditionalist line a little bit, I think squash is a wonderful game for finding people out over the course of a long match.

“There’s still that side of it, but I don’t know whether it’s the be all and end all, and there’s a big argument for and against best of three. But I loved it last year at Canary Wharf, it was a great tournament and it worked really well.

“I’d love to see it some areas, maybe it’s a different tour, a different part of the tour, or maybe just one or two tournaments. Who knows what it will end up being, but I think it’s worth pursuing.”

Tickets for the Citigold Wealth Management Canary Wharf Classic sold out in just four weeks after going on sale in October, and the packed crowds at London East Wintergarden results in a crackling atmosphere – one which Willstrop says is one of the best on the PSA Tour.

“I love the atmosphere and I’m a big fan of Tournament Director Tim Garner. I love his tournaments and he’s a great guy to work with. His events are always a pleasure and he puts on an amazing event at Canary Wharf.”

Garner will be masterminding logistics at Canary Wharf just a few days after making sure that the PSA World Championships ran smoothly inside a new venue, Chicago’s Union Station.

Willstrop added: “Canary Wharf is a special place for me. I played the first one when it was best of seven games. I love it and it’s just a brilliant atmosphere. People have a few drinks at the top and really get into it. They shout and cheer and that’s what we want as players. It’s really good.”

Willstrop is sure to be cheered on by a large crowd travelling down from Pontefract. Later in the day, suitably hydrated, they will be in full voice to support wild card Sam Todd, the latest England star to roll off the Pontefract production line.

The 15-year-old meets Mathieu Castagnet, the Frenchman who won the Canary Wharf title in 2016.

Willstrop is on the same side of the draw as defending champion Mohamed ElShorbagy and World Championship runner-up Tarek Momen. The winner of his first round tie meets Australian Ryan Cuskelly, the No.8 seed, in the second round on Monday.

World No.5 Simon Rösner is seeded second, and he is predicted to meet New Zealand’s World No.7 Paul Coll in the semi-finals.

All fixtures from the Citigold Wealth Management Canary Wharf Squash Classic will be broadcast live on SQUASHTV (rest of world) and Eurosport Player (Europe only). Semi-final matches will also be shown live on BT Sport, Fox Sports Australia, Astro and other mainstream broadcasters.

WIN A HIT WITH A PRO PLAYER AT CANARY WHARF

Citigold Wealth Management are offering squash fans the chance to win a one on one session with a pro-player as well as VIP tickets, when you enquire about Citigold today. Terms and conditions apply. Offer ends 5th March 2019. Learn more here