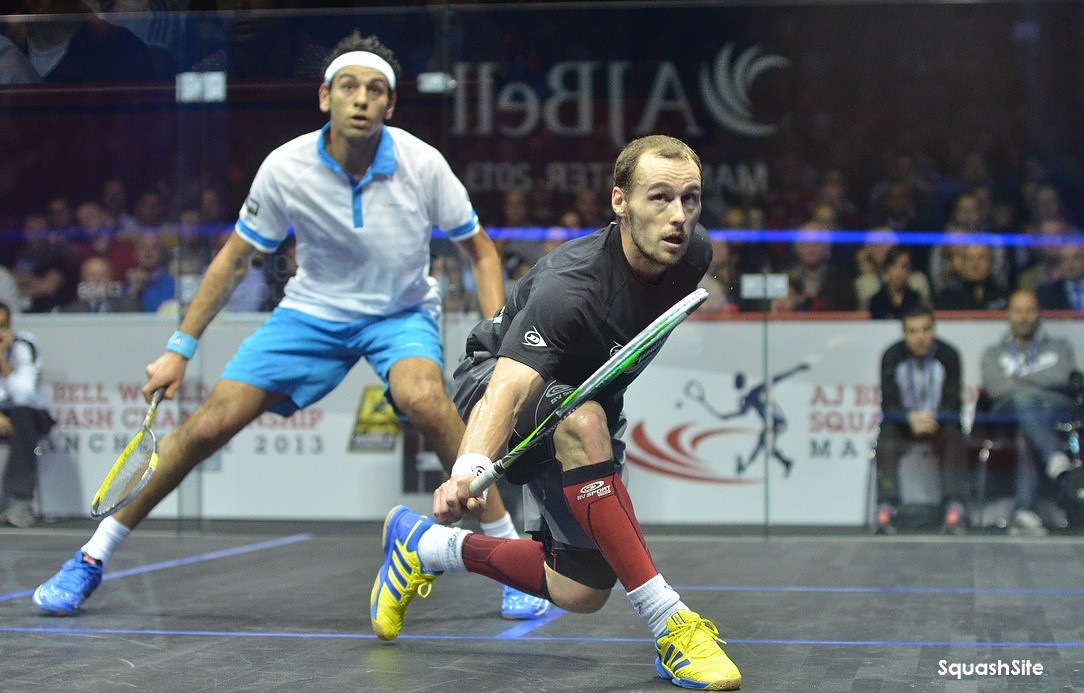 Grégory Gaultier and Mohamed Elshorbagy had the full-house crowd – many of whom new to squash – enraptured in a match full of spectacular squash which Gaultier, eventually, won 6-11, 11-3, 11-8, 12-10.

After 78 minutes of furious, frantic, gruelling rallies, and three game balls in the fourth saved, the Frenchman took the 19-minute-long fourth game 12-10.

After he found himself 8-4 down, Gaultier won a typically long rally, in which he played he behind-the-back volley, with a fine drop.

Then in the following rallies, he worked Elshorbagy out of position then finished with a good backhand volley drive and played a great flicked volley, delayed to almost the last millisecond, which wrong-footed Elshorbagy.

At 7-8, Elshorbagy worked the rally well down the forehand side, varying the length, and causing Gaultier to half-slip, half-dive on a short retrieval, which Elshorbagy improvised to push away at head-height.

And to bring up the gameball, Elshorbagy, after another amazing rally, produced a superb topspin backhand overhead drop-shot – the type of extravagant finish only he and a few others are regularly capable of.

On his first match ball, he again worked it well, but this time missed an ambitious backhand overhead winner, and Gaultier saved another matchball with a backhand drive volley after Elshorbagy could only scrape it loose off the sidewall.

Then Elshorbagy received a no let, which was upheld after review, when, although slightly off-balance, it looked like he could fairly comfortably get to the ball. He had certainly done enough during the match to show he was capable of getting it.

At 10-10, it was, unsurprisingly, pretty tense, and the next four rallies, although still very high quality, ended up as lets – two either way.

At match ball down, Elshorbagy showed amazing movement to scramble up three balls on the back wall but couldn’t quite get to a Gaultier drop, for which he was given a no let, upheld after the additional review.

Elshorbagy had the better of Gaultier’s matchball, and probably three winners against normal opposition, including a ferocious boast – but Gaultier is not normal opposition and eventually forced the Egyptian to hit just one too many, and too fine, a drop shot.

But the warm embrace at the end of the game, showed just how much Gaultier had been pushed, and his respect for this rising – or already risen – star.