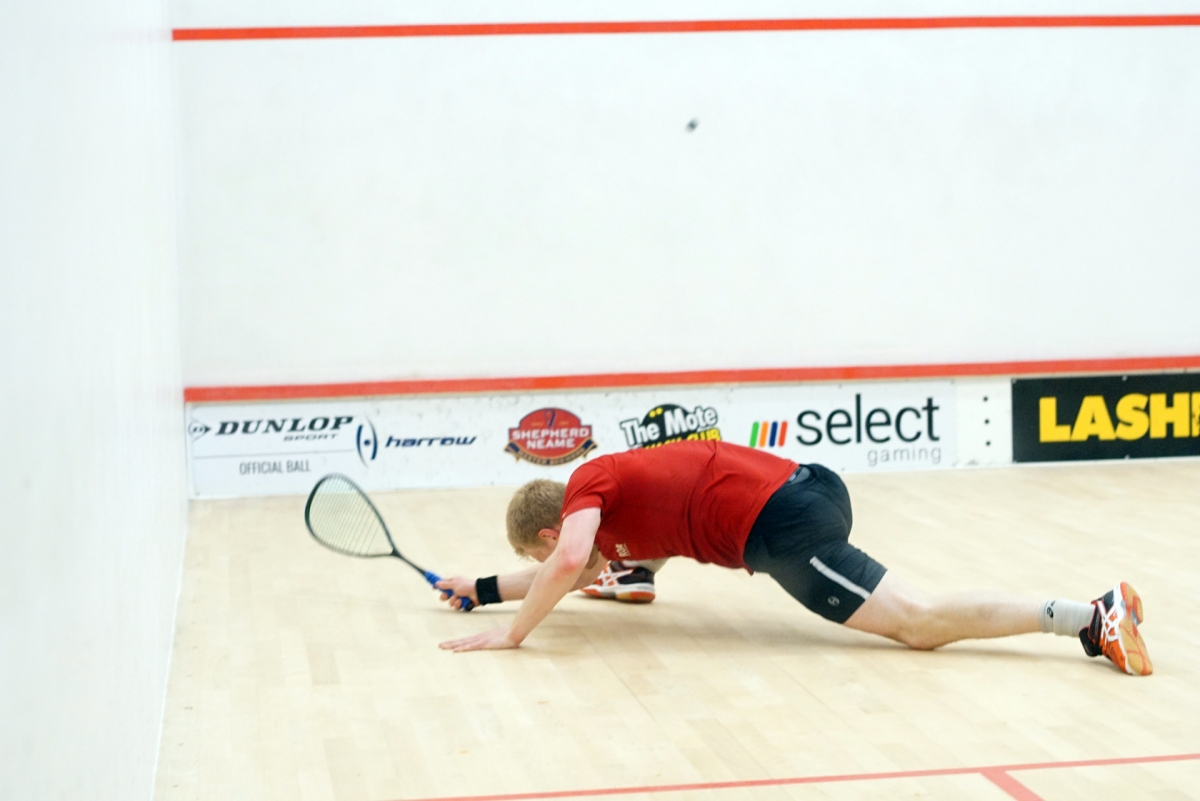 Top qualifying seeds Adrian Waller and Abdulla Mohd Al Tamimi were both knocked out of the Canary Wharf Classic at the first hurdle.

Makin and Lake were well prepared for the battle, both physically and mentally. Makin came through a niggly, scrappy encounter with Waller and Lake’s tight, controlled squash forced his opponent, Masters, into numerous errors.

Wimbledon Racquets and Fitness Club is a happy hunting ground for Makin. He won the recent Wimbledon Open, beating Ben Coleman in the final, and he is hoping for a repeat performance tomorrow.

Makin said: “I lost to Adrian at this stage in the Channel VAS Open at St George’s Hill three months ago so I knew what to expect and knew what I had to do to avoid another result like that.

“I know how good Adrian is at the front so I tried to keep him out of those areas where he can do a lot of damage.

“I have been working hard with Rob Owen on improving my quality all over the court and I am also working with the Welsh national coach David Evans. The hard work is paying off and I just want to keep getting the results to improve the rankings.

“I am looking forward to playing Ben tomorrow. We played here in the Wimbledon final and I won that one so I hope I can produce the same level of performance tomorrow against a very good player.”

Coleman was delighted to celebrate his return from injury with a 3-1 victory over Tristan Eysele from South Africa.

He said: “I think it’s the first time since I started squash at the age of 11 that I’ve been away from the court for that long. I think I was off four days once, but this time, I was away for eight weeks. Squash is hard enough when you are 100% fit, but when you struggle physically… I feel for those guys like Ramy Ashour, I now realise how hard it is.

“Tristan played well, really great, but I feel that my strength when I was playing at my best was my physicality, whereas now I’m just fighting to try and get back to where I was.”

Lake fought back impressively after losing the opening game to No.8 seed Masters.

It was a battle of contrasting styles, with the tall Masters playing at a high pace and looking to hit winners at the earliest opportunity.

Left-hander Lake was more patient and methodical and those tactics ultimately reaped the desired dividend.

Masters attacked from the off and the opening game was a justified reward for his ambitious approach, but he lost his way somewhere in the second game.

As Lake tightened up his width and length, he presented fewer opportunities for Masters to attack.

Lake comfortably took the second game and opened up a 7-5 lead in the third. Masters fought back to draw level and at 7-7 the most crucial phase of the match unfolded.

It was Lake who managed that passage of play more intelligently and he let out a roar of delight as he clinched the game 11-9.

The value of that exchange was soon evident as a stream of errors flowed from Masters throughout the fourth. Lake continued to move the ball to the back corners with impressive accuracy and dominated throughout.

Lake said: “I am very pleased to get past Josh. We all know how he can put pace on the ball and he loves to attack. I stuck to my game plan and I hope I can keep it going against Lucas Serme.”

Masters admitted: “I made too many mistakes and felt that I was not fit enough to play at that level. I was trying to put the pressure on and force the pace but I need to learn to be more patient.”

Ironically, the two players will meet again on the glass court on Friday in the Wild Card Challenge for a place in next year’s main draw. 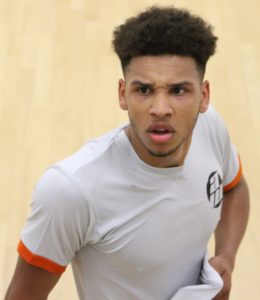 Fallows was in outstanding form to beat a subdued looking Al Tamimi, who spent most of his energy on arguing with the referee.

Fallows (right) said: “A few people came to tell me that my game is better now I’m not getting involved any more. It’s something I have been working on for a few months now, because I realise that it was not helping my game. So, I’m happy that work has improved my squash.

“Today, I was just trying to frustrate him by getting some of his best shots back. And once I got a few of his shots back, it looked like he went a bit well, crazy! And that was the game plan really…”

There were comfortable wins for Lucas Serme, Declan James, Charles Sharpes and Mohamed Reda, although Reda lost the first game to home hero Kyle Finch, who was cheered to the rooftops by a packed Wimbledon gallery.