Joy of six as Egyptians dominate in World Tour Finals

Alan Thatcher June 12, 2019 No Comments on Joy of six as Egyptians dominate in World Tour Finals 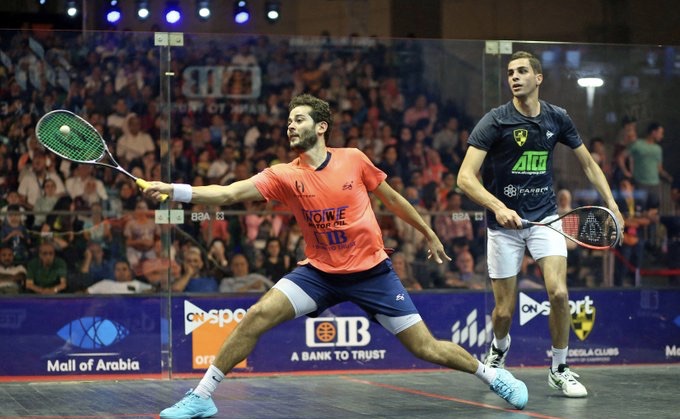 Karim Abdel Gawad volleys in his victory over Ali Farag

The penultimate day of group stage action at the 2018-2019 CIB PSA World Tour Finals saw all six matches go the way of Egypt as defending champions Mohamed ElShorbaby and Nour El Sherbini impressed in front of their home fans at Cairo’s Mall of Arabia. 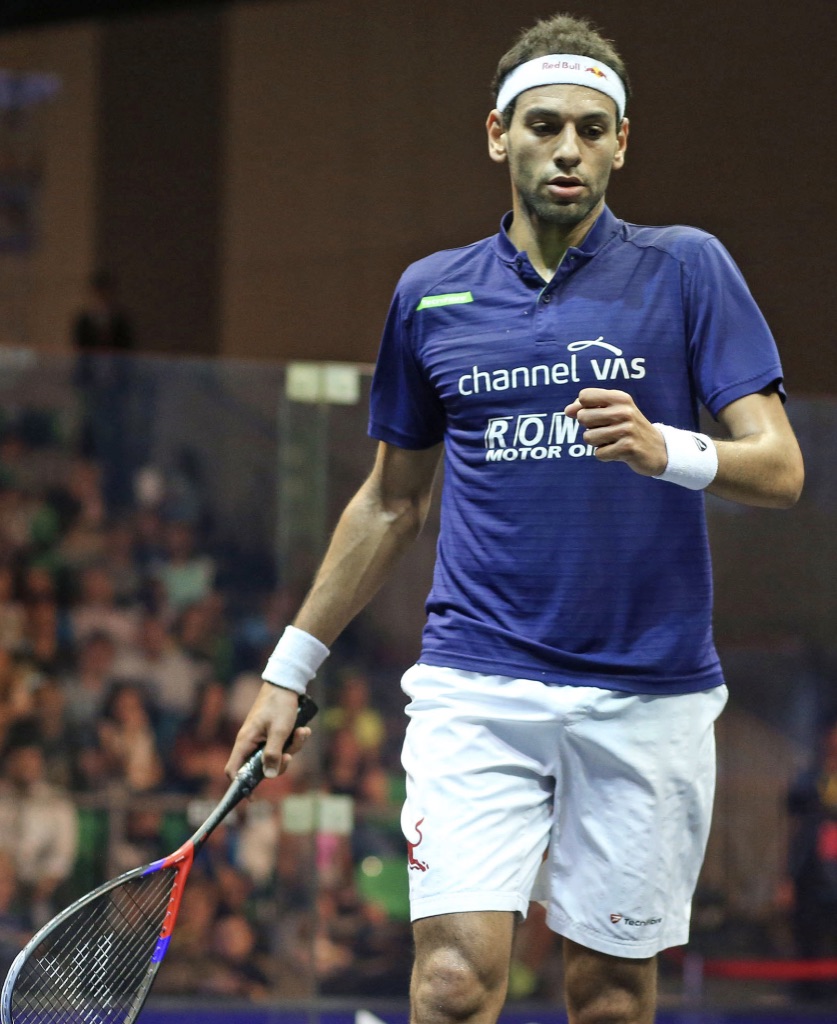 ElShorbagy, the men’s World No.2 who is looking to win this tournament for the third successive time, has guaranteed himself top spot in Group B after he defeated Germany’s Simon Rösner 11-9, 11-4 to ensure he qualifies for the semi-finals with a 100 per cent record.

The group stages and semi-finals are held using a round-robin, best-of-three games format, and ElShorbagy added to 2-1 victories over Peru’s Diego Elias and World No.3 Tarek Momen to book his spot in the last four.

“It’s good to keep the momentum going,” said 28-year-old ElShorbagy (pictured). “Each player had a rest day throughout the event, and if I had to choose before the event, then I definitely would have chosen the one after the group stages. Having the rest day let me know that I was going to go full power today and I can regroup for the semis now.

“There is always room for improvement, even if I think I have been getting better every day. I feel like each player didn’t play their best on the first day because we are all trying to get used to the conditions. It’s very hot and humid and it completely changes the dynamic, and from the second day we have all stepped up a level. I think we’ve all played better and it has set the stage for some great semi-finals.”

Elias and Momen will meet in the final fixture from Group B tomorrow (June 12), with the winner of that match joining ElShorbagy in the semis.

Meanwhile, World No.4 Karim Abdel Gawad moved four points clear at the top of Group A as he beat top seed and World No.1 Ali Farag 11-9, 11-8. The two players had met five times this season, with Gawad winning just one of those battles.

However, the former World Champion put in a relaxed performance to continue his strong run in Cairo, taking all eight points on offer so far after he also beat New Zealand’s Paul Coll 2-0 yesterday (June 10).

“They are both very fit, Ali is No.1 in the world, so he is playing amazing squash, he has been beating me the whole season. This is only the second time for me to beat him this season, I had to grab one by the end of the season at least.”

Meanwhile, World No.7 Mohamed Abouelghar joined Farag on four points after sweeping aside Coll. The 25-year-old was in imperious form as he powered to an 11-3, 11-6 victory and he will play Gawad tomorrow.

Gawad requires just a point to qualify, while if Farag finishes level on points with Abouelghar, he will go through due to a superior head-to-head record.

A 2-0 win for Gawad will see him qualify top, while Coll wouldn’t be out of the running just yet in that scenario. If he went on to beat Farag 2-0, he would finish on four points along with Abouelghar and Farag, meaning it would go down to percentage of points won to decide who reaches the last four.

Points won percentage will also decide the qualifiers if Abouelghar and Farag both win their matches 2-0 as they will join Gawad on eight points. In that scenario, whoever has the highest points won percentage out of those three players will qualify. 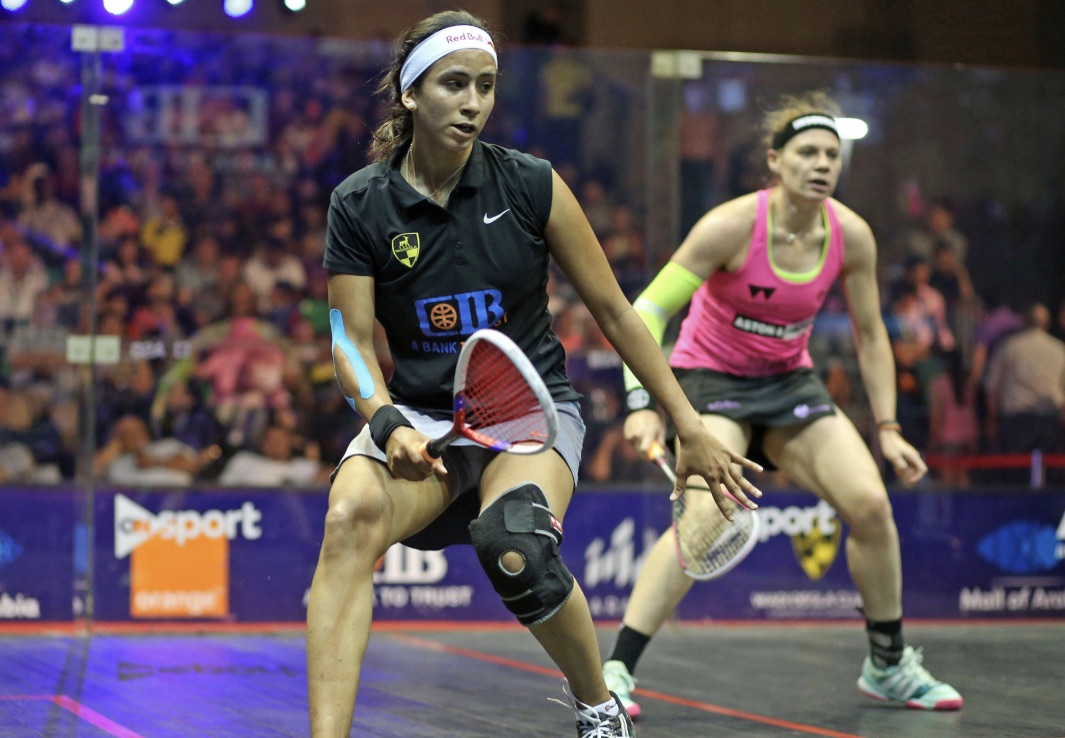 Nouran Gohar and Sarah-Jane Perry in action in Cairo

In the women’s event, defending champion Nour El Sherbini kept her title defence alive as she got the better of World No.5 Nour El Tayeb 2-0 in a repeat of the PSA World Championship final.

World No.2 El Sherbini lost her opening Group B match to World No.7 Sarah-Jane Perry, but she joins the Englishwoman on four points after defeating El Tayeb 11-5, 11-7.

“I was really disappointed after the first match,” said El Sherbini (pictured) following her win. “I had a lot of support from my team, my parents and all of my family. I tried to change all of the negatives into positives, I just wanted to enjoy and play today and try to win. 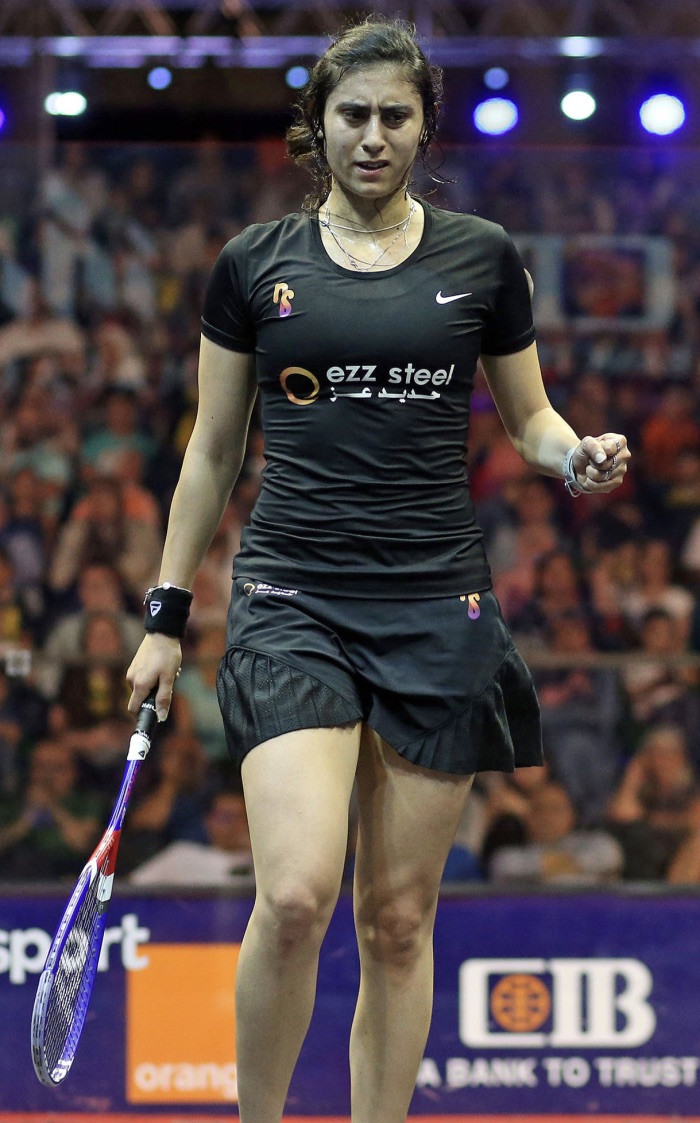 “On the first two days it was very bouncy and hot, but today it is a bit windy. Both conditions you have to deal with the court and play the match, but the court is good for me and it’s good to have a venue like this to play in.”

British Open champion Nouran Gohar sits at the summit of Group A with five points courtesy of a 2-0 victory over Perry as she bounced back from a 2-0 defeat to El Tayeb in the previous round of fixtures.

Gohar will play El Sherbini tomorrow, with the winner of that match qualifying for the semi-finals.

“We haven’t played since 2017 in Chicago, she came back superbly and has a really good spirit,” Gohar said.

“I love the way she plays and it was a tough match. Tomorrow will make a big difference. If there is someone that is really difficult to play against then it is Nour [El Sherbini], she has everything, she’s the complete player. She has so much experience, she is a three-time World Champion, but again I have nothing to lose and I’ll be the underdog and we’ll see what happens.”

Perry and El Tayeb will contest the group’s other showdown, and it will be a straight shootout for a semi-finals berth, with the winner of that contest advancing to the last four.

The fight for the coveted semi-final berths draws to a close today in the final day of group action. Play begins at 19:00 (GMT+2) and will be shown live on SQUASHTV (rest of world), Eurosport Player (Europe only) and the official Facebook page of the PSA World Tour.