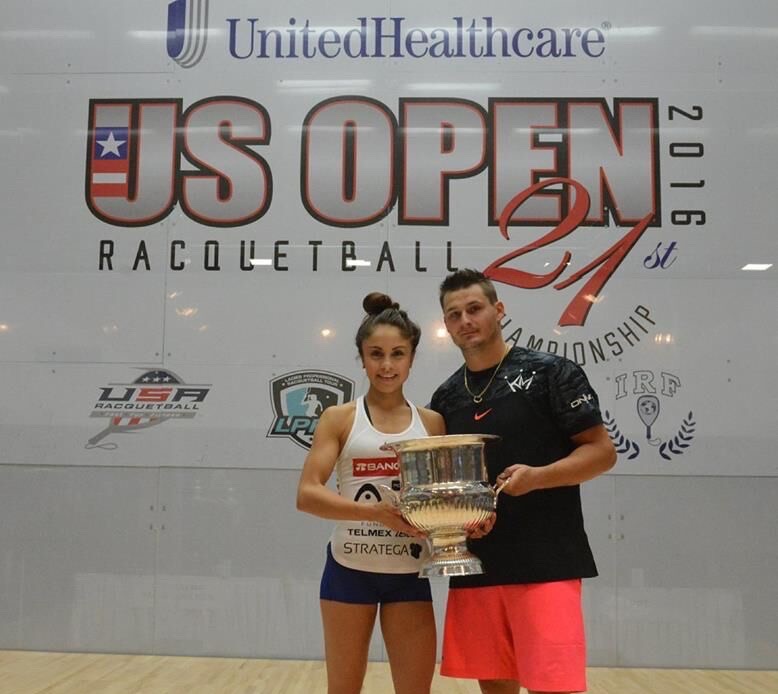 Minneapolis, Minnesota in the United States serves as the annual host city of racquetball’s US Open, the biggest event on the sport’s calendar. During the first week of October, more than 700 competitors from 14 countries descended on the metropolitan city to test themselves across singles, doubles, mixed doubles, and age and skill divisions. Literally, there is a division for just about everyone!

But while many come just to experience and be a part of such a large event, the professionals seek to capture some of the $67,000 prize money on offer.

The tournament’s focus is a single, all-Lucite court where all players want to be. Similar to a World Tour squash event or a tennis major, players may enter a qualifier division consisting of one or two matches to enter the main draw and compete against the regulars on tour.

In the men’s draw, resident champion Kane Waselenchuk once again defended his crown. Canadian Waselenchuk hails from Edmonton, Alberta, but is now based in Austin, Texas. Kane has owned this glass court, defending it for nine consecutive years (12 total), and there appears to be no evidence that things will change any time soon.

With Waselenchuk simply majestic in the final, #2 ranked player Rocky Carson had no answer as Waselenchuk completed a perfect week, winning 11-2, 11-2, 11-6.

As it stands, expect Waselenchuk to continue building his case for “Greatest of all Time” for many years to come, although young 19-year-old Rodrigo Montoya has the raw talent to become his successor one day. You heard it here first!

In the women’s draw, Paola Longoria’s dominance is almost equal to that of Waselenchuk, and no one was surprised to see her cruise through the field once again.

Three points is the maximum she lost on any of her 12 games played on her way to the finals, and while her Mexican doubles partner Samantha Salas Solis did better than any other opponent this week, Longoria once again cruised to the Championship, winning 11-3, 11-7, 11-3.

This is her sixth consecutive title and seventh overall. Similar to Waselenchuk, there are no obvious threats to her dominance.

The pro doubles matches are perhaps what most have now come to watch and enjoy. Considering the regularity with which Waselenchuk and Longoria have won their titles here, doubles provides an opportunity for something new and dramatic.

Doubles matches are two games to 15 points, and, if tied, a tiebreaker is played to 11 points. In the men’s draw, two-time defending champions Kane Waselenchuk and Ben Croft were beaten in a dramatic semifinal by American brothers José and Marco Rojas.

After losing the first game, the pair was down early in the second, only to come back and win it, then playing simply sublime racquetball in the tiebreaker to advance to their first final. There they faced Mexican duo Edson Martinez and Daniel De La Rosa, and won much more comfortably, 15-10, 15-5.

One wonders whether De La Rosa was feeling the effects of his two-and-a-half-hour semi-final loss earlier in the day. Irrespective, the Rojas brothers were full value for their maiden US Open title.

In the women’s doubles, there was no such drama. Mexican pair Longoria and Salas have consistently been the dominant team here, and while they did lose the World Championship final in dramatic fashion at the IRF World Championships in July, those opponents were not in the draw this week.

Consequently, the duo had little trouble running through the draw without the loss of a game, beating Ecuadorian Veronica Sotomayor and Canadian Frédérique Lambert 15-10, 15-0 in the final.

The beginning of the US Open brings plenty of optimism for all, and players dream of causing upsets and performing on the big stage. While hopes and dreams exist, reality bites, and Waselenchuk and Longoria both demonstrated why they, and no one else, reign supreme on the courts of the US Open.

More information can be found at www.unitedhealthcareusopen.com/. The US Open is owned by USA Racquetball (www.teamusa.org/USA-Racquetball) and sanctioned by the International Racquetball Federation (www.internationalracquetball.com).