Karim Abdel Gawad: Winning at the Pyramids was a dream come true

Alan Thatcher September 26, 2016 No Comments on Karim Abdel Gawad: Winning at the Pyramids was a dream come true 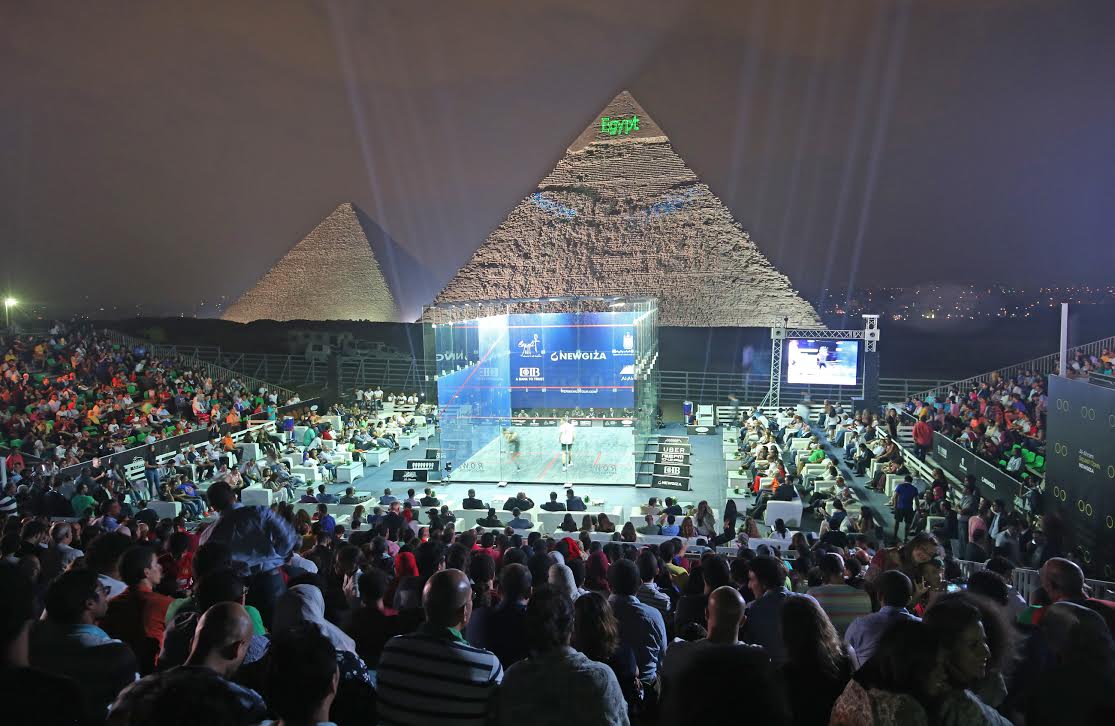 Sleepless nights turned into a dream come true for Karim Abdel Gawad as he won the Al Ahram Open New Giza in front of the Great Pyramids.

The world No.6 overcame fellow Egyptian Ali Farag in straight games as he became the first winner of the revived Al Ahram tournament in the world’s most stunning sports location.

For any squash player, it is an incredible experience to play at the Pyramids. For an Egyptian, the meaning is something that borders on the spiritual. To become a champion, the feeling is even more stupendous.

Which is why Karim Gawad is still coming down off a cloud of pure joy after he and Raneem El Welily celebrated their successes in front of a packed crowd in the desert arena with the silent, towering, brooding Pyramids floodlit in the background.

Karim said: “Last week was one of my best days in my life. I’ve enjoyed every second of it , I’ve been dreaming to play this tournament since I was nine years old.

“I was really happy when I got the news in January that the Al Ahram will take place this year after 10 years off the calendar.

“When I started training in my off season I was just dreaming of the day the tournament will start and will go on court and start playing. Before I arrived at the Pyramids I had to play my first round on the traditional courts at the City View club.

“That was the toughest match of my career so far to be honest. If I had lost I would be one of the crowd again and would not have the chance to participate in the glass court!

“The night before my quarters I couldn’t sleep the whole night. I wasn’t thinking at all about any tactics, winning or losing, I was just dreaming and counting the minutes and seconds to start the match and enjoy my squash!

“I was getting more excited and happier after every round until I reached the final. I started to feel my second dream is becoming very close. I started to remember when I was nine years old and watching Ahmed Barada holding the trophy high, and closing my eyes and imagining myself holding the trophy instead of him. I was under a very high pressure. I couldn’t warm up before the match. I just wanted to start the match!

“When I listened to the referee saying ‘championship ball’ my heart started beating very high and quick. That was the best week of my life so far to be honest.

In the 16-man draw, 12 of the players in the first round were Egyptian. There were plenty of dramas along the way, with lucky loser Zahed Mohamed taking out Spain’s Borja Golan in a first-round marathon lasting 102 minutes.

Ramy Ashour, who had looked comfortable in his first round tie with Omar Abdel Meguid, was forced to retire with a recurrence of his hamstring injury early in his quarter-final against Farag.

The number four seed made the most of his opportunity by beating the top seed, world number one Mohamed Elshorbagy, in the semi-finals.

While these events unfolded, Gawad was solidly working his way through the draw, beating Scottish qualifier in a tough first round on the club courts in Cairo.

Then it was on to the glass court and he felt that the momentum was building as he played superbly to beat the experienced number five seed Tarek Momen in straight games.

The physically imposing figure of Omar Mosaad stood between him and a place in the final but again Gawad played cleverly to edge through in three tough games.

Perhaps, in the final, Farag had little in the tank after his phenomenal battle with Elshorbagy.

Gawad seized the opportunity to crown a glorious week with an imperious performance to win the match 11-4, 11-7, 11-5 to follow in the footsteps of Egyptian legend Ahmed Barada.

With such steady progress over the years, further success certainly beckons for

KARIM’S PATH TO THE PYRAMIDS TITLE