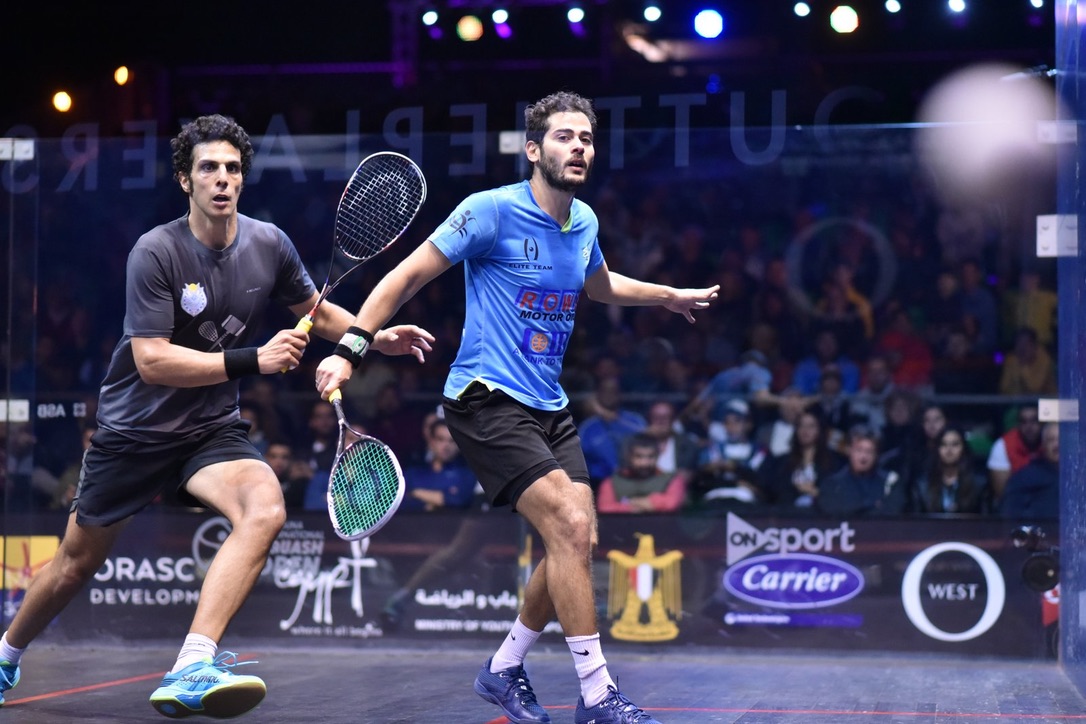 Former World No.1 Karim Abdel Gawad had to battle back from two games down to overcome fellow Egyptian Omar Mosaad in the third round of the El Gouna International, PSA World Tour Platinum tournament taking place at the picturesque setting of Abu Tig Marina.

The 2016 World Champion started slowly, but managed to fight his way back to eventually win the match in five games.

The pair had met five times in the past on the PSA World Tour, with the former World Champion having won the last three meetings.

Mosaad came out strongly, as he aimed to put an end to that run. He took a two-game lead after 38 minutes of pulsating squash, before Gawad turned the match on its head. The ‘Baby-Faced Assassin’ started the fightback in the third, winning it 11-1. He carried that on through the fourth and into the fifth game, as Mosaad seemed to tire, winning out 9-11, 9-11, 11-1, 11-7, 11-8 in 90 minutes.

“It is very tough against someone like Mosaad, of course. He is a very good player, and he is very tough, both physically and mentally, so it is always tough to play against him,” Gawad said after winning.

“When I was 2-0 down, I was not playing my best squash. I had to change my game plan. My fitness coach was also a mental coach today so thanks to him.

“I just wanted to play some good squash. I did not want to go back home with a 3-0 loss here in Gouna, especially as I love playing here in Gouna. The conditions were really tough, but I am really happy that I managed to get through to the next round.” 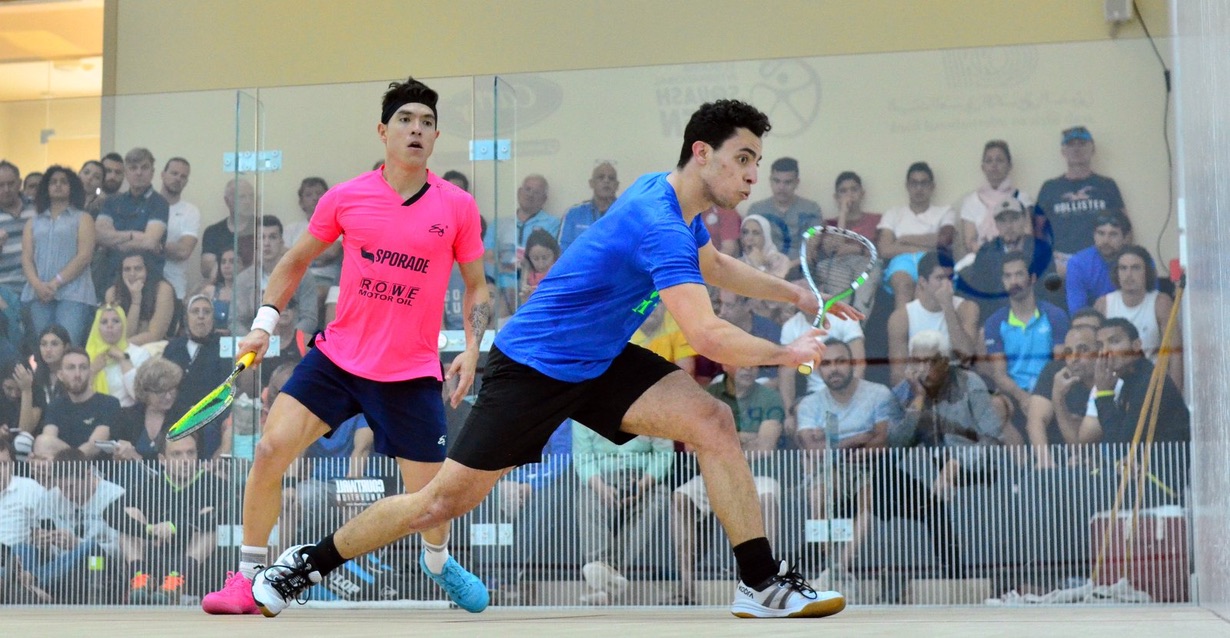 Meanwhile, Egyptian wildcard Fares Dessouky earned his first win over a top 10 player since tearing his ACL as he prevailed in a scrappy, four-game battle with Colombia’s Miguel Rodriguez over at the El Gouna Squash Complex

Dessouky, the World No.42, spent 14 months on the sidelines due to an ACL injury but has shown glimpses of getting back to his best since returning in January, reaching the final of the CCI International in his first tournament back.

He claimed a milestone win over World No.7 Rodriguez today, winning 11-7, 11-5, 7-11, 11-9. The match was a physical affair, with plenty of traffic issues on court as Rodriguez in particular got aggravated with Dessouky’s movement, but the Egyptian prevailed to earn a spot on the glass court.

“It means a lot to me, it’s my first win over a top 10 player since the injury. It was a very tough match, mentally and physically,” Dessouky said.

“I was playing my own squash, my attacking games helped me today. The court didn’t bother me a lot, but there were long rallies, so it was hard physically.”

Dessouky will play World No.2 Mohamed ElShorbagy, who is through to the last eight of the tournament after dispatching Mexico’s Cesar Salazar in straight games at the glass court at the marina.

The former world champion struggled to get his rhythm in the early stages, but got going to win the first, before convincingly winning both the second and third to set up a clash with Dessouky.

His younger brother, and defending champion, Marwan, is also into the quarter finals after beating Switzerland’s Nicolas Mueller.

The pair had played each other four times on the PSA World Tour, with the World No.11 having won the last three, and he came out firing. Marwan had competed on the glass court in round one and, despite his second round fixture taking place on the side court, the World No.25 made no difference as he won out in three. 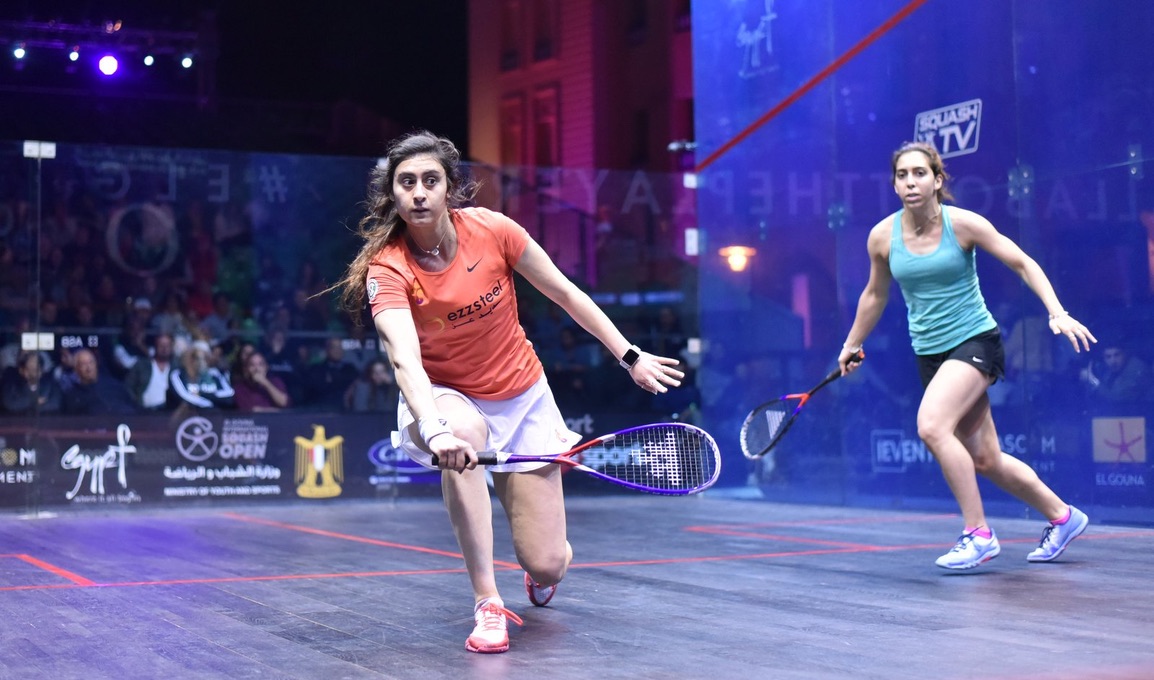 In the women’s draw, World No.2 Nour El Sherbini eased her way into the last eight of the El Gouna International as she dispatched compatriot Nadine Shahin in just 17 minutes.

The pair had only played once before on the PSA World Tour, with Sherbini having beaten Shahin in three games at the Windy City Open back in 2017.

She did exactly the same here as El Sherbini put on an absolute clinic, allowing her opponent nothing on the glass court.

“I was happy on court. I felt more comfortable because the weather is so different to Saturday,” Sherbini said.

“I took advantage of having played on this court before, which she hasn’t. It is not easy on the outdoor court, so I think I was better on court and I like the court more today and I was happy with my performance.

“I will just try to take it as another match. Nouran [Gohar] always gives me a tough match and a physical one. It has been a long time since we have played, maybe a year, and it is exciting to see how it is going to go.” 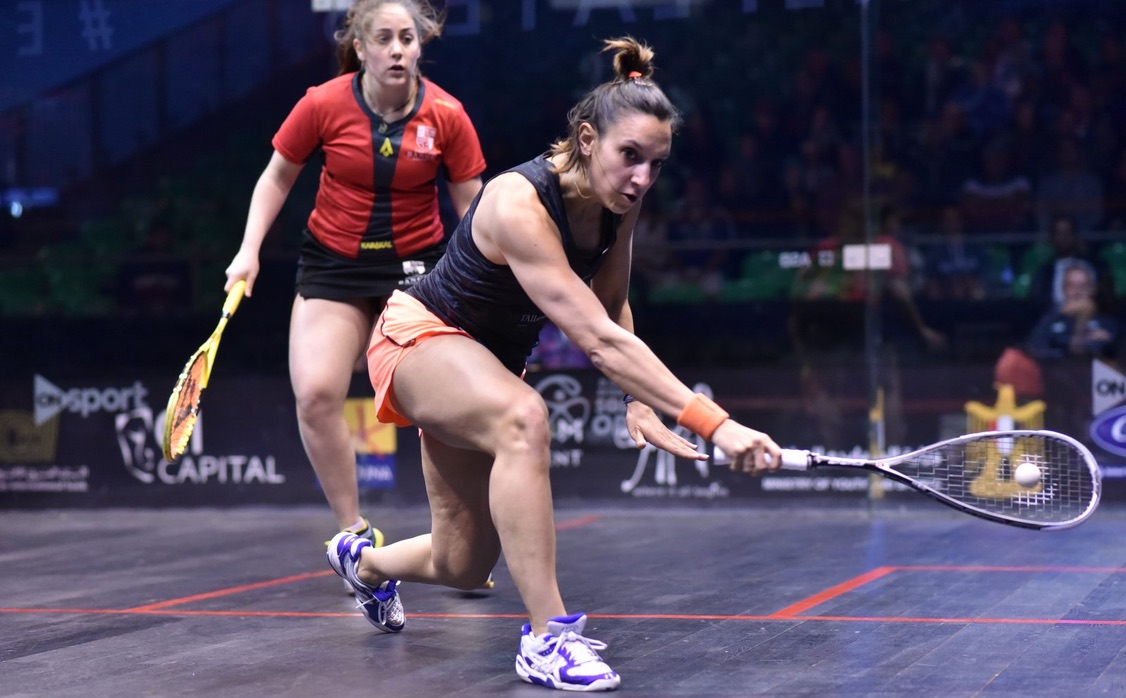 Camille Serme on the attack against Tesni Evans

France’s Camille Serme moved through to the quarter-finals after a dominant performance from the World No.4 saw her down Wales’ Tesni Evans in straight games.

Serme had gotten the better of Evans in all seven of their previous PSA Tour encounters and this match went the way of the 30-year-old as she won 11-5, 11-6, 11-9 to set up a last eight meeting with England’s Sarah-Jane Perry.

Serme’s physicality saw her dominate the opening two games as she took control of the middle of the court and punished Evans every time the World No.9 left the ball short. Evans come back into the third game as she took a 6-2 lead. However, Serme was able to battle back to close out the match and set up a clash with England’s Sarah-Jane Perry in the quarter finals.

“I am pretty happy. I think I managed to find a better length, and maybe having one more match on the glass court compared to Tesni helped me a little bit,” Serme said.

“In the third, I lost my focus a bit. Tesni played better, she hit the ball harder and found a better length as well, but I lost my focus a little bit. The decision at 9-7 was a bit tricky, but I am just very happy that I came back to win in three.”

Perry overcame a spirited performance from Hong Kong No.1 Annie Au to win her third round match at El Gouna in five, despite thinking she might not play just an hour before the contest.

The World No.6 had suffered an ankle injury in her win against Rowan Elaraby two days ago, but luckily for the Englishwoman, she was able to recover in time to take to the court this afternoon.

Egyptian World No.8 Nouran Gohar was the other woman to earn her place in the quarter-finals after getting the better of compatriot Zeina Mickawy in four at the Squash Complex.

The action continues tomorrow as the quarter finals get underway. The top half of the draw will played on the glass court at Abu Tig Marina, with play starting at 18:30 local time (GMT+2).

Matches from the glass court will be broadcast live on SQUASHTV (rest of world), Eurosport Player (Europe only) and the official Facebook page of the PSA World Tour (excluding Europe and Japan).