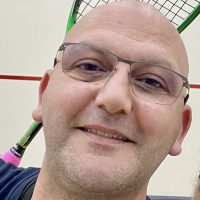 Lee Withamhttp://www.squashmad.com
Lee Witham is Company President at ProSportCourt, using his experience as a professional squash player and coach in his new role as inventor, lighting expert and court designer to create solutions to enhance and improve multiple sports.

Lee Witham, Part 9: My final point is to stress that technology is the key to building squash’s future

Lee Witham, Part 8: How clubs can improve their business performance, and make their venues more attractive to young adults

Lee Witham, Part 7 on Recreational Squash: Why do so many clubs ignore 95% of their members?

For all the successes, we also need to adopt a more caring attitude to help players avoid burnout
By LEE WITHAM (Squash Mad Special Correspondent)

Today I’m taking a look at the world of performance squash and especially the PSA World Tour and the College Squash scene.

These are two areas in which I have experience and I am impressed by the improvements in both eco-systems.

Looking at the wider picture of performance squash, I think it is fair to say this segment of the community is very well taken care of.

Many former professional players find it an easy transition to coaching in America, and the college recruiting system in the USA has made this big business for coaches and clubs.

Until recently, squash in the US was played exclusively in private schools and country clubs. Public clubs are popping up mainly on the east and west coasts with plenty of success. In a relatively short period of time, the US is producing players ready to play on the men’s and women’s pro tours.

What is very interesting is the myth that attending college will harm your chances of competing on the tour. Ali Farag and Amanda Sobhy were the first to achieve success and both sit at No.1 and No.4 respectively.

Recent graduates are flying through the ranks, too. Georgina Kennedy followed Ali and Amanda at Harvard and is now at eight in the world, while Olivia Fiechter and Youssef Ibrahim (both Princeton) are nearing the top 10 and Victor Crouin (also Harvard) is now at 18.

However, there are negatives. Burnout from the 10-plus years of intensive junior and college squash is quite prevalent. Students are pushing themselves to the limit physically and academically.

Very often after graduating, players give singles squash a rest and opt for the less physically demanding American hardball doubles. It would be very informative to understand how many college players drop out from playing singles squash once graduating. The number is higher than most would believe.

In the rest of the world, the story is very different. Squash is rarely a vehicle to enter college.

Academies are here and there but the numbers are quite small. For many years pros have trained in the off-peak times as the courts are generally free and leaving the early evening slots for junior players.

Unfortunately, this often means the recreational players are missing out on watching the professional players go through their high-quality training and practice matches.

It’s tremendously important that the pros and clubs work together in promoting squash. Clubs allow the pros to play and train at extremely discounted prices during the day, and in return the pros could provide regular exhibitions or represent the club team whenever possible.

This brings the pros closer to the recreational player and very often can encourage sponsorship and support on the tour.

Watching squash on the TV was a non-starter. Sponsorship funding has grown vastly, and more platinum-level tournaments than ever before have been launched and this number is expected to increase further.

Alongside the increases in prize money, with extra funding in the game we can expect improvements all round that include higher quality cameras and better slow-motion playback, to name just a few.

Like many other sports, we struggle to recruit referees and need to understand why. Refereeing is not easy, by any means. The speed of play at a professional level is incredibly quick and intense. Keeping up with play and staying focused takes a lot of discipline: make a bad call and it could ruin your day.

Add in the social media comments that make a referee out to be biased towards a nation or a player and you wonder how we recruit referees in the first place. This season referees have been seen to be targeting players (and rightly so) for not playing within the spirit of the game. This needs to be encouraged, and not the subject of abuse.

Referees need protecting, and that means allowing them some space to operate at major venues without the risk of being intimidated by spectators (and players’ family members).

Referees are necessary to make sure the players adhere to the rules and play within the spirit of the game. Effectively no different to a police officer. If the players keep this in mind and understand they are not necessarily up against the ref but working with him or her will perhaps encourage more referees. Yes, referees will make mistakes, just like you and me.

Undoubtedly, social media has a large impact within a community. Whether you are on the court playing, or at the supermarket, you are representing professional squash.

Players should not go on social media and make comments that would not be accepted within the court or at an event. We need more detailed parameters for social media, and discipline for those who do not act in the spirit of the game.

As indicated earlier, this is the very reason the sport beginning with ‘F’ has lost its ways. It attracts the worst people all because those at the top (including the players) do not care about the culture they have created. Take note, squash, it can change almost overnight if not taken seriously.

TOMORROW: Looking after recreational players who play just for fun