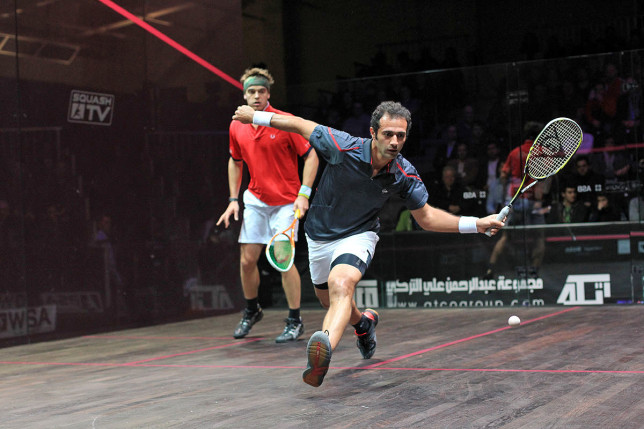 Amr Shabana, the four-times world champion and one of the greatest players in the history of the game, announced his retirement today. He is believed to be taking up a new post as Egyptian national coach.

Shabana, a left-hander with sublime skills and a technique so smooth that it was the envy of every other professional, retires from the PSA World Tour with a ranking of ten in the world.

Now 36, he became the oldest winner of a PSA World Series tournament when he won the 2014 Tournament of Champions in New York at the age of 34 years and six months.

He announced his retirement with the following message:

As you all may have heard “rumours” from social media that I am “retiring”. I am here to set the record straight. I have decided not put out a “press release” and instead to write a personal message from the heart to you all. First I have to say I have been overwhelmed by your wonderful messages on social media, I am feeling the love, thank you all for that.

So basically, after spending 20 years as a competitive pro athlete in the beautiful sport of Squash I have decided that this is the perfect time for me to step down and relinquish my spot in the top 10 and retire from the PSA (Professional Squash Association) International Squash Tour and focus on my other passion which is to help people worldwide realize their hidden potential and find their inner strengths. I want to motivate you and help you realize and achieve your potential not only on court, but most importantly in life.

I am retiring from the PSA, “BUT” I am not retiring from Squash and I am not hanging my rackets up just yet, on the contrary this is just the beginning of a new exciting era where I will be serving the game in new and innovative ways and giving you the fans new and unprecedented free access to me in the coming months and much much more. You will actually be seeing more of me now than you ever did!

I would like to take this opportunity to thank first and foremost all of you fans around the world, I have been extremely humbled by your immense support over the years. To all the amazing athletes I have had the pleasure to compete against, thank you for the memories.

And to anyone and everyone who I might have missed from coaches to feeders to training partners to anyone who has ever come in contact with me and contributed to my long journey to the top, I thank you for your support from the bottom of my heart.

See you all VERY soon. Keep smiling, train hard and remember it’s all in your head. Thank you. I am out.

PSA Chief Operating Officer Lee Beachill, and a fellow world number one, said: “Amr Shabana’s presence will be sadly missed from the professional circuit as he is a player who is admired across the sport, from amateur players to his fellow pros.

“Shabana has been a joy to watch throughout his 20 years on the professional circuit and on behalf of the whole squash community I would like to wish him well in his future endeavours.”

Tarek Momen wrote on Facebook: Amr Shabana just announced his retirement!!!!!!
All I could see in front of me now are snapshots of the specials moments I shared with him over the past 10 or 12 years.
Shabana to many people is the Legend, the Maestro or the Prince of Egypt, but to us he is much more than that, he’s our big brother, and a real inspiration to thousands of kids around the world.
He’s the definition of modesty and humility.
I’ll truly miss you Shonbongo and I’ll miss the countless hours we killed sharing hotel rooms all over the world and what I’ll miss the most is waking up every morning watching you practice your golf swing while watching the golf channel ?
Good luck in the next chapter of your life, I’m sure you’ll still be involved with us one way or the other ?

Jersey national coach Nick Taylor said: The Legend Amr Shabana has announced his retired today… A player who made the game beautiful to watch with his perfect technique… I had the privilege of playing and spending time with him for many years on the tour and learned so much from him. Good luck Maestro and will miss not seeing you gracing the court!