England’s Lucy Turmel will meet reigning champion Joelle King in the Manchester Open after a stunning victory in the first round upset the seedings.

World No.37 Turmel defeated Egypt’s World No.19 Nada Abbas in four games on the side court at the National Squash Centre.

The 20-year-old Turmel, from Ipswich, said: “I was down 9-1 in the second, but I know that I am very fit at the moment thanks to all the training I have done during the lockdown so I trusted myself to stick in and I went 2-0 up.

“I am really happy. It is only the second tournament where I have got through to the second round and I am pleased that the hard work has paid off.”

New Zealand’s World No.8 King got her title defence off to a winning start as professional squash resumed for the first time since the six-month enforced suspension of the PSA World Tour due to the COVID-19 pandemic.

The tournament, which was originally scheduled for May, is being held behind closed doors at the National Squash Centre in Manchester, and is delivered in partnership with Manchester City Council with all players and staff following strict COVID-19 protocols.

World No.8 King took the PSA Silver title in Manchester last year when she defeated Wales’ World No.9 Tesni Evans in the final and the Kiwi once again looked strong on the National Squash Centre glass court as she powered past Latvia’s World No.59 Ineta Mackevica in just 23 minutes.

“I think I got every bit of nerves I had in the system out,” said King. “Sometimes it’s difficult when you’re playing a player that you haven’t seen that much. Personally, I haven’t seen Ineta play and she is quite a tricky opponent. Sometimes you have set players that you play against all the time and you have plans for them and then you get a spanner in the works, someone like her, then it’s nice to get over the line in three.” 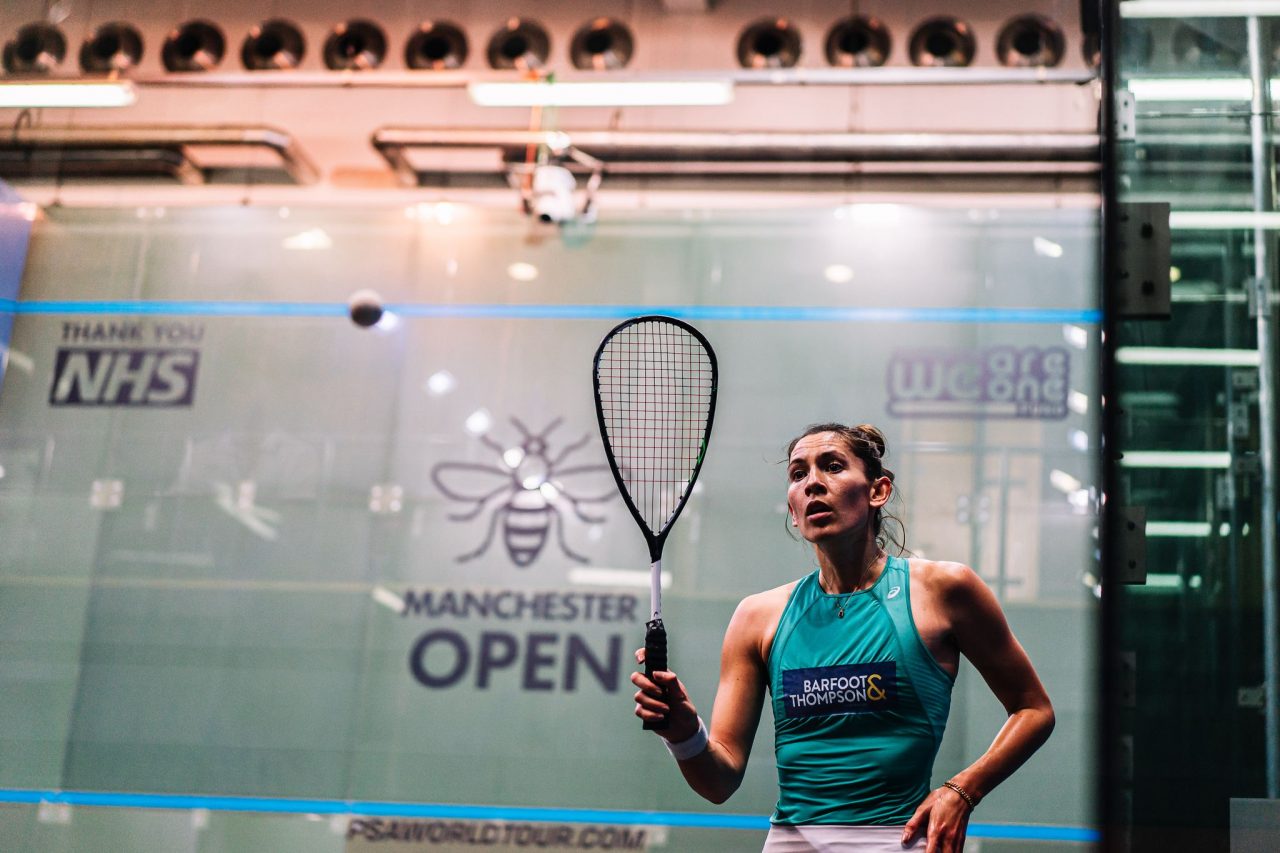 The top seed, France’s Camille Serme, held off a comeback from USA’s Sabrina Sobhy to book her place in the second round with a 3-1 victory and will now face Belgium’s Nele Gilis in the last 16 after she downed wildcard Lily Taylor in straight games.

Serme’s compatriot Coline Aumard also booked her place in the next round courtesy of a 3-0 victory over Egypt’s Hana Ramadan.

“I knew it was going to be a tricky match, so I’m very happy to be through,” said Serme afterwards.

“There’s many challenges. First of all, it’s a different glass court, compared to the one we train on in Paris, a few funny bounces, but I guess it’s the same for both of us. It’s really hot as well, so it’s tough to not be able to wipe our hands. The biggest challenge was to find the targets in the back of the court, and I think that was the key in the match.”

“It feels great to be back,” said 20-year-old El Hammamy, who was last in action when she lifted her maiden Platinum title at the Black Ball Open in Cairo in March.

“Everyone was waiting for squash to be back and I was very excited and really looking forward to the tournament. I was ready and I really wanted to be back.

“I was really frustrated when the tour got suspended. I was in good form and I wanted to keep going and keep playing tournaments because I was expecting so much from myself. Now that I’m back I’m focusing on the tournaments and I have confidence and feel like I can keep going like I did in Black Ball.” 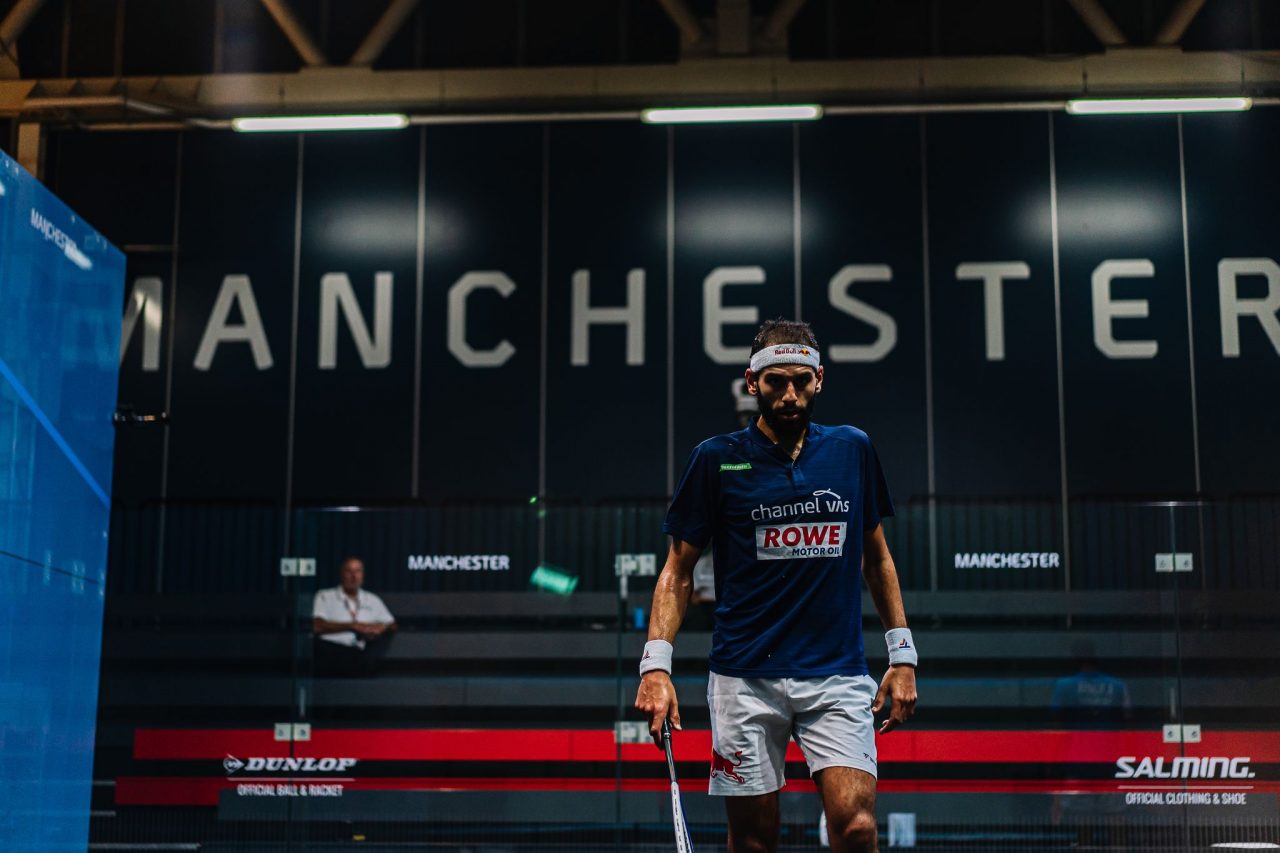 In the men’s draw, World No.1 Mohamed ElShorbagy picked up where he left off before the suspension as he displayed a confident performance against Germany’s Raphael Kandra to take an 11-8, 11-5, 11-8 victory.

“When I saw the draw, I knew it was going to be a different match because he’s a lefty and he goes for shots. Usually when you haven’t played for a while, you want to just get used to the glass court and get used to competing, but with Kandra he breaks that rhythm with the way he plays.”

The Egyptian will take on England’s former World No.1 James Willstrop for a place in the quarter finals after he made light work of Pakistan’s Tayyab Aslam to book his place in the second round.

Meanwhile, World Champion Tarek Momen also got his campaign at the PSA Silver event off to a winning start with a 3-1 victory over Qatar’s Abdulla Mohd Al Tamimi.

The two players had enjoyed some competitive battles before the lockdown, with their two matches going all the way to five games. However, this time proved more straightforward for Momen as he was able to fight back from a game down to secure his place in the second round, where he will take on compatriot Mohamed Abouelghar, following his hard-fought victory over England’s George Parker in the last match of the day on the glass court.

“I’m pleased to have been able to push towards the end and with the last couple of points, I took some risks and it paid off,” said Momen following his win.

“It feels a lot more like practice [with no fans], of course the nerves and tension are there but when I hit a dropshot and nobody is sat outside watching I probably think I’m back home practicing. We’re getting used to it, I watched a lot of tennis before coming here, so I’m getting the vibe of playing in front of no audience.

“It will definitely affect each player in a different way. I would like to think of myself as someone who can push through regardless. We miss having people watching and cheering because that’s what we play for, but there are people watching and just behind a screen and not here.”

“I’m pretty happy with today. It was a bit of a slow start, but it’s really nice to be back on court after six months off,” Coll admitted. “[There were a] few nerves in the opening two sets but I managed to make them long enough and stay in the rallies. I thought I was a bit unlucky to lose the second, but credit to Baptiste who was playing well.

“I felt a lot better in the third and fourth, a lot more aggressive. I stepped up the court a bit more. Overall I am pretty happy with the performance and I got the tournament off to a good start.”

Coll will face Egypt’s Fares Dessouky in the next round, while Makin takes on Scotland’s Greg Lobban following their victories over Scotland’s Alan Clyne and England’s Richie Fallows, respectively.

“I think my mentality was really good,” said Lobban. “With the stoppages and stuff that would have bugged me in the past, but I feel I’m a lot stronger now. It’s one area that I really dug into in a lot of depth during the lockdown and I think that was the strongest part of my game today.”

Round one of the Manchester Open continues tomorrow, Thursday September 17, at 11:00 local time (GMT+1). The action will be broadcast live on SQUASHTV (rest of world), Eurosport Player (Europe only) and Facebook (excluding Europe and Japan). The semi-finals and finals will be shown live on BT Sport in the UK and other international broadcasters globally.