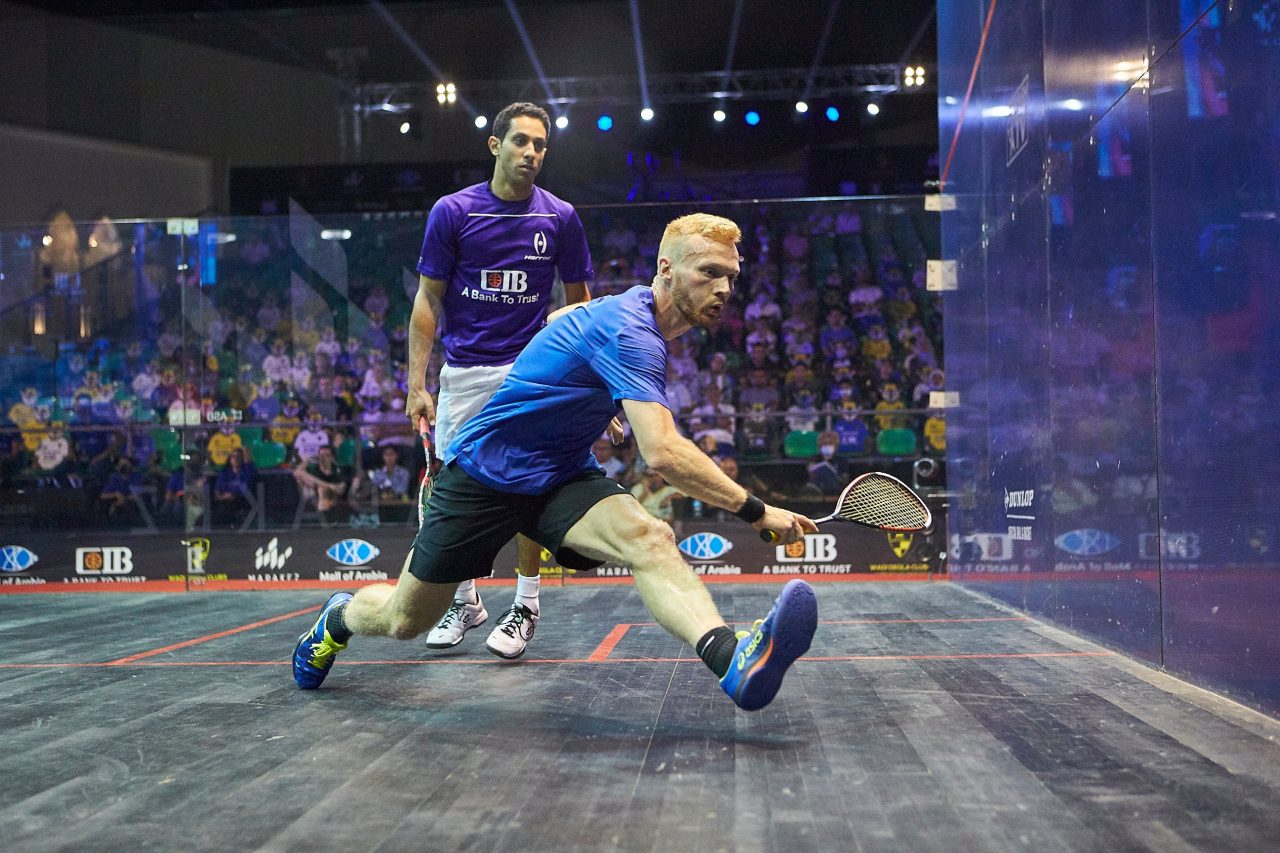 Welshman Joel Makin crowned his debut in the 2019-20 CIB PSA World Tour Finals by toppling world champion Tarek Momen, and Peru’s Diego Elias caused another upset on day one of as he overcame defending champion Karim Abdel Gawad at Cairo’s Mall of Arabia.

The PSA World Tour Finals feature the world’s top eight male and female players who qualified through the CIB Road to Egypt Standings and uses a best-of-three games format in the group stages.

The event was moved from June, 2020 due to the COVID-19 pandemic and strict protocols are in place at the event, with the venue operating at 50 per cent capacity in terms of spectators, while all players and event staff have formed an ‘event bubble’.

Day one of the tournament saw six Egyptian players drawn up against players from different nationalities. Elias marked his first event back for six months with a victory over former World No.1 Gawad, which will see him end the day second in Group A. The reward for a top two finish in a group is a place in the knockout semi-finals.

“I am really happy to be back on court,” said Elias, who missed out on appearing at last week’s Manchester Open following a late withdrawal.

“It has been a long time since I last played a tournament and it is great to be back. I am feeling pretty good and I knew after all the training I had a chance today, so I was confident.

“I got a bit tired at one point. He plays really fast and covers a lot of angle, so I had to take some time to recover to be ready. I am feeling good, I am not the kid I was before, now I am ready to win tournaments. I trained really hard for this, I am confident and I want to win as many matches as possible.”

Makin and Momen got Group B under way in the final match of the evening, with Makin winning 2-1 to go top of his group.

“I started losing my structure in the second game and he was shutting me out all the time on the backhand and he was getting good lines through there, so I had to hit around that, and I did much better in the third,” Makin explained.

“Now I have two more attempts to get one more win and I am through. Obviously I want to get as many wins as I can here. Best of three is never going to be as easy for me but I am pleased to nick it 2-1.”

In the women’s event, World No.1 Nouran Gohar stepped onto court as the world’s highest ranked female player for the first time as she dispatched England’s Sarah-Jane Perry 2-0.

Gohar is making her first appearance since a knee injury put a premature end to her title challenge at the Black Ball Open back in March, but claimed the World No.1 spot during the six-month suspension of the tour following the retirement of previous incumbent and defending women’s World Tour Finals champion Raneem El Welily.

“It’s never easy against her, she’s a very talented player, very skilful and one of the most capable on tour,” said Gohar.

“She’s big, so it’s quite tough to play against her but she’s very fair, so it’s also very enjoyable to play against her. I really have to adapt my game plan to play her, but I’m very happy with my performance today and I’m super happy to be back on court after six months.”

The 22-year-old sits in second place in Group B behind World Champion Nour El Sherbini, who also made her return to action following the restart of the PSA World Tour tonight in Cairo.

El Sherbini is making her first appearance since March after opting to sit out of Manchester Open earlier this month. Following a season that was disrupted by injury and illness, the break looks to have done El Sherbini some good as the World No.2 came storming out of the traps to take maximum points at the Mall of Arabia with a commanding win over New Zealand’s Joelle King.

“It’s definitely good to be back and I think there is no better place to start my season than in my home country,” said El Sherbini.

“It’s a very hard first tournament to play. I’m playing the top eight in the world and it could be a final in any match, so it’s very hard to start like this. We’re playing in a group, there are four of us and we have to win two of them [to qualify for the semis].”

Meanwhile, Manchester Open champion Nour El Tayeb picked up where she left off there as she dismissed United States No.1 Amanda Sobhy in a comfortable Group B opener lasting just 17 minutes.

Group stage action continues tomorrow and play begins at 18:00 (GMT+2). All six fixtures from the Mall of Arabia will be broadcast on SQUASHTV (rest of world), Eurosport Player (Europe only), ON Sport (Egypt) and the official Facebook page of the PSA World Tour.