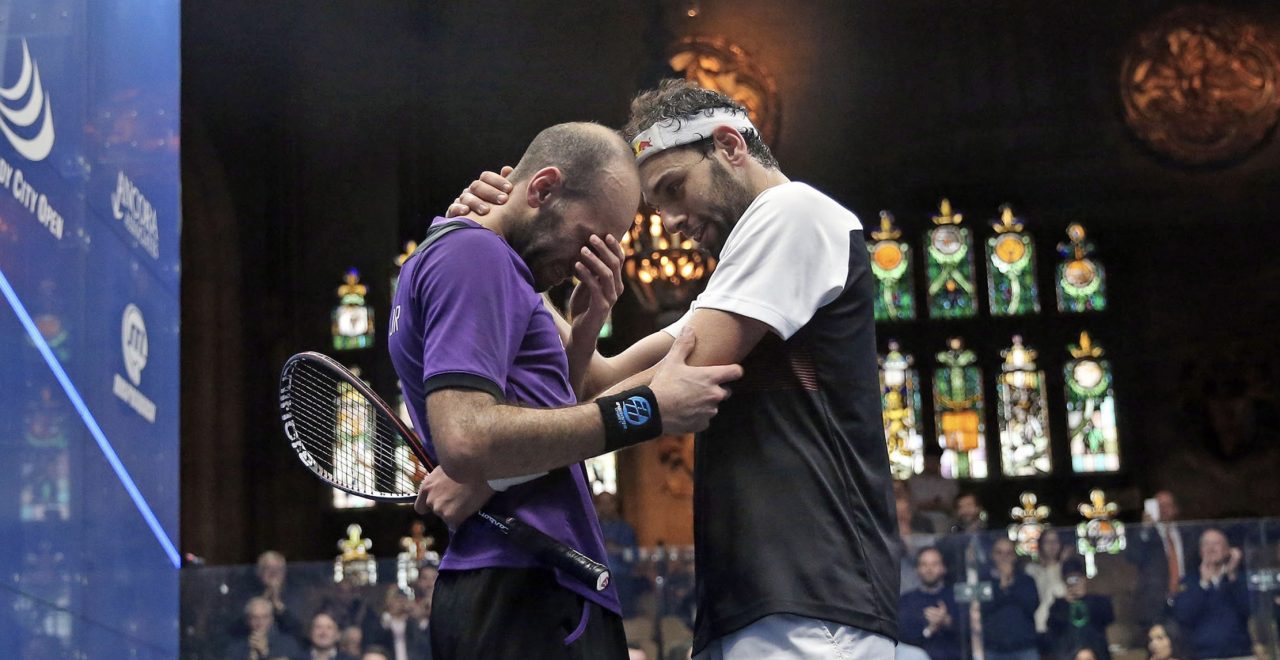 World Championship runner-up Marwan ElShorbagy will return to the scene of one of his biggest ever victories on the PSA World Tour later this week when the Egyptian competes at the 2018 Windy City Open presented by the Walter Family & EquiTrust Life Insurance Company, PSA World Series tournament between February 22-28.

ElShorbagy reached his first ever World Series final at the 2017 instalment of the Windy City Open, with one win in particular standing out – his quarter-final triumph over older brother and then-World No.1 Mohamed, which proved to be one of the defining moments of the 2016-17 season.

Never before had Marwan taken more than a game against his sibling in seven previous meetings but, under the chandeliers of the University Club of Chicago’s Cathedral Hall, the 24-year-old defied expectations to take a huge win in four games – leading to tearful scenes as the emotional weight of the result took its toll on both brothers.

“Of course it gave me a lot of confidence,” said Marwan. “Playing my brother is always more difficult for me and to get that first win against him was really hard for me. I was very happy with the way I dealt with it emotionally until the end of the tournament and with how I backed it up the day after against Ali [Farag].”

Marwan’s win over Farag in the next round took him through to a maiden World Series final, where he eventually came unstuck against World No.1 Gregory Gaultier.

But that final proved to be something of a breakthrough for the Bristol-based Egyptian, who has won two PSA World Tour titles, reached the final of the PSA World Championships and reached a career-high World No.4 ranking, all in the past 12 months.

Marwan puts his rapid improvement down to an increase in consistency, saying: “I think I have been playing very well recently. I feel being inside the top four is making me more of a consistent player, which is something I have been working on lately on how to back up tournaments.

“I’m just enjoying my time on court and hope to keep that form going. I’m not putting any pressure on myself to win a first major [title], it will come at the right time for me. Right now, I’m just focused on being a better squash player every day.”

With Gregory Gaultier reluctantly giving Chicago a miss because of injury, the top four men’s seeds are all Egyptian, a familiar pattern in the game as that nation’s dominance is reflected in both results and rankings.

Marwan will play Hong Kong’s Leo Au in round one and is seeded to meet Farag in the semi-finals once again as he battles for a share of the $500,000 prize fund, which is split equally across both the men’s and women’s draws and is a record amount for a PSA World Series tournament.

The 2018 Windy City Open will be held at the University Club of Chicago and all glass court matches will be shown live on SQUASHTV (Rest of World) and Eurosport Player (Europe only).

A women’s draw also features and is headed up by World No.1 Nour El Sherbini, who is seeded to meet fellow Egyptian Raneem El Welily in the final, which would be a repeat of December’s PSA Women’s World Championship final.

The semi-finals and finals will also be shown on mainstream channels across the world, with the likes of BT Sport, beIN Sports, Fox Sports Australia and Astro just some of the channels showing coverage.

Tickets start from $25 and can be purchased through Eventbrite.