Alan Thatcher October 14, 2019 No Comments on Massive success as World Squash Day attracts thousands of newcomers to the sport 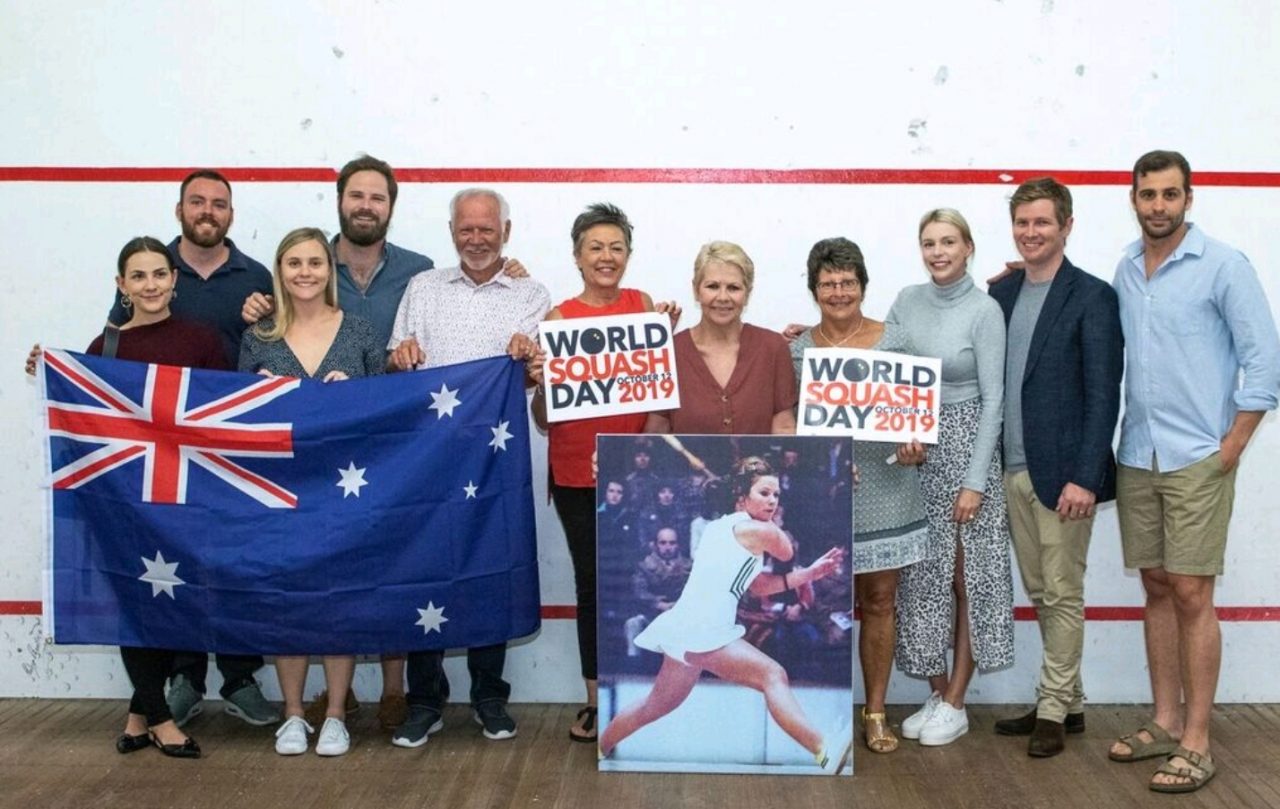 They all shared their energy and passion for the game at some amazing events on every continent to help to raise the profile of the sport and attract a wave of new players.

Many other star names signed some World Squash Day shirts at major early-season events in Nantes and San Francisco. These will be auctioned off in a special fund-raiser in conjunction with the PSA Foundation.

Three-times world champion Matthew spearheaded a campaign by England Squash to attract at least 5,000 new players on the day. Matthew’s home club of Hallamshire in Sheffield held a week-long campaign to launch the new season in the build-up to some fun events on World Squash Day itself.

Nick kindly reported: “Firstly I would say testament to yourself for having the dedication to grow the event year on year. The end goal for your project, with the help of England Squash and support from so many clubs and national federations, was the feel-good factor that was felt around the world. As we always say, the key is to introduce or reinvigorate people both young and old, male or female, able bodied or not, because once they try squash it is so addictive and you want more.”

Matthew and Perry took part in promotional videos to launch the campaign, which seems certain to smash the initial target figure. This morning, England Squash revealed that more than 4,500 new players had been recorded, with 30% of the registered clubs still to upload their data to a special App set up to track the figures.

Scotland’s Lobban and New Zealand’s Grayson joined English coach Taylor at his Infinitum Academy in Boston, Massachussetts as they coached a large group of juniors before taking to the court for an exhibition match.

British number one Makin popped in to the Hirwaun club near Aberdare in Wales. He explained: “The club is just down the road from my house. It was originally called Aberdare but rebuilt a few years ago and renamed Hirwaun. It was great fun to see so many members and newcomers enjoy World Squash Day.”

Declan James and his manager Daryl Selby, who have both held the England number one position this season, both took to the court. James was down with the kids at Nottingham, while Selby led his family’s Off The Wall WSD session in Essex.

Down Under, one of Australia’s greatest-ever female players, 1981 world champion Rhonda Thorne, was honoured at the Daisy Hill club in Logan City, Brisbane.

Club owner Brad Hindle, who competed on the PSA Tour for many years, said: “Rhonda was our World Squash Day Ambassador for Daisy Hill and Logan City. It was an absolute joy to honour her achievements and services to squash with a beautiful canvas sprint at a reception at the club.

“A copy of that print will now hang on our Legacy Wall alongside all the other great Queensland squash players.”

Rhonda told the crowd of more than 100 well-wishers: “Squash is the greatest game in the world. It can be played by everybody, whatever their age. It was wonderful to see all nine courts here busy with juniors on World Squash Day.”

Maria Toorpakai, who famously fled Pakistan to avoid persecution for playing squash as a child, returned home to hold a coaching session for girls, which showed how times and cultures are evolving.

She said: “We distributed sport equipment and squash rackets among girls in Peshawar. We were pleased to welcome a few children with disabilities. Every girl, every child should feel included, encouraged and supported.”

She then Tweeted support for the World Squash Day event held in Iran which also showed a large number of females taking to the court. 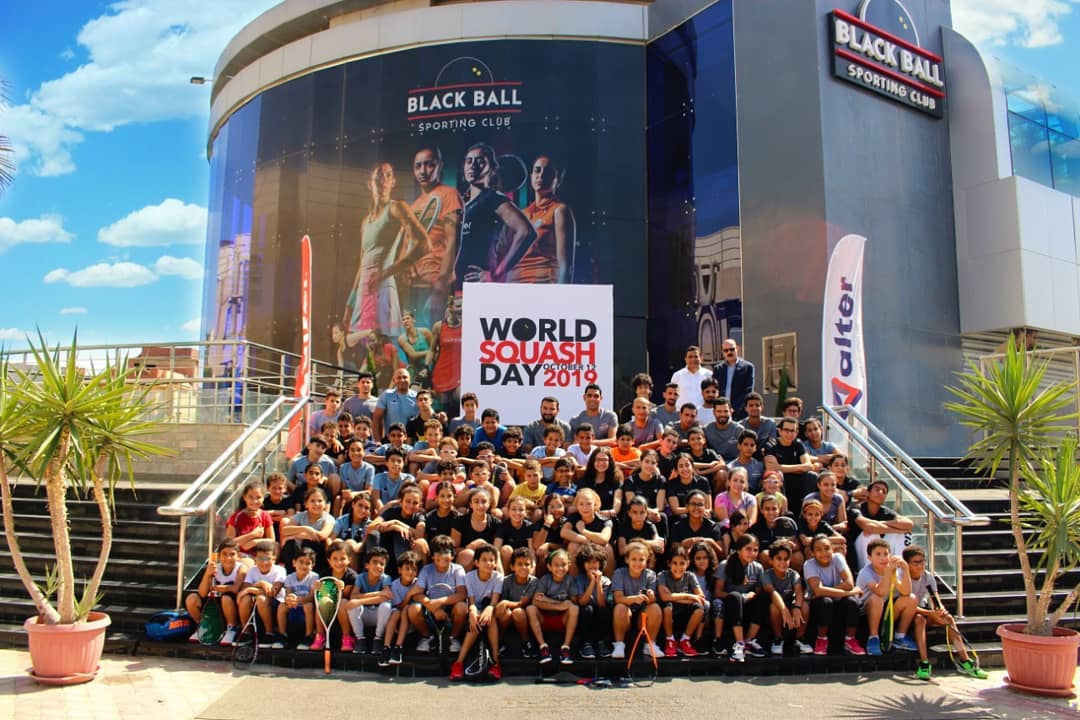 A huge group of youngsters at the Black Ball Sporting Club in New Cairo, Egypt

Egypt is proudly leading the way with support for female athletes in the Muslim world.

The Black Ball Sporting Club, host of two major PSA events in New Cairo, attracted TV coverage and had a visit from the Minister for Youth and Sport when they held a World Squash Day event to promote the game with dozens of juniors in attendance.

Squash Director Ashraf Hanafi said: “It was a fantastic day and we recruited more than 200 new junior members, many of them from local schools. The TV coverage was broadcast at a peak time and was seen by millions of people on Egypt’s main TV sports programme.”

At the other end of the continent, the World Squash Day event at Camps Bay Squash Club in South Africa featured a game called Street Racket designed to offer a cheap introduction to racket sports with no courts required.

World Squash Day was celebrated in America with events that coincided with the finals of the US Open, with a number of clubs concluding their day’s events by watching the two finals live on SquashTV.

At a special luncheon in Philadelphia before the finals, US Squash inducted Ginny Akabane and Bunny Vosters into the United States Squash Hall of Fame.

Further south, the Squashinhos project in Brazil took to the courts to provide exercise and education in a safe environment for children in Rio de Janeiro.

He has launched a Just Giving page to raise funds for the project and said: “Squashinhos is a sports and educational development project which helps suffering children from communities in Rio de Janeiro. Three times a week they receive English and squash lessons.

“The aims is to create a social and healthy learning environment for these children, opening their eyes to another world away from drugs and weapons.”

Social media was ablaze with World Squash Day activities throughout the weekend, with messages of support from Nicol David and Jahangir, and loads of fun themes, including a limerick competition launched by Patrick Kidd, the venerable Diary Editor of The Times newspaper in London.

Mike Harris took time out from organising a busy day of activities at the Exeter Golf and Country Club to pen this offering, with a special poetic resonance for PSA members:

There was a spirit of revival in Denmark, where experienced promoter Kim Frederiksen chose World Squash Day to launch a new club in the quaintly named town of Middlefart.

He said: “We just have two courts right now, but we want to dream big to grow this wonderful game.”

Among the thousands of social media messages flying through cyberspace, a large number of World Squash Day posts featured the food on offer.

As well as an impromptu Best Buffet Competition, two outstanding offerings from Sri Lanka and Warwickshire (England) led to a Bake Off-style vote on Twitter!

But the best location for a World Squash Day Barbie was an easy choice, the Kawaroa Park Squash Club in New Plymouth, with the club balcony overlooking the beach on the west coast of New Zealand’s North Island.

We even had Glow squash at the “Fluoro” court at the Squash Logic club in Melton, Australia.

And World Squash Day is far from over Down Under. Peta Murphy, a squash-loving MP in the constituency of Dunkley, near Melbourne, is hosting an open day at the Australian government courts on Wednesday