Mo and Raneem return to defend US Open crowns

Alan Thatcher September 23, 2019 No Comments on Mo and Raneem return to defend US Open crowns 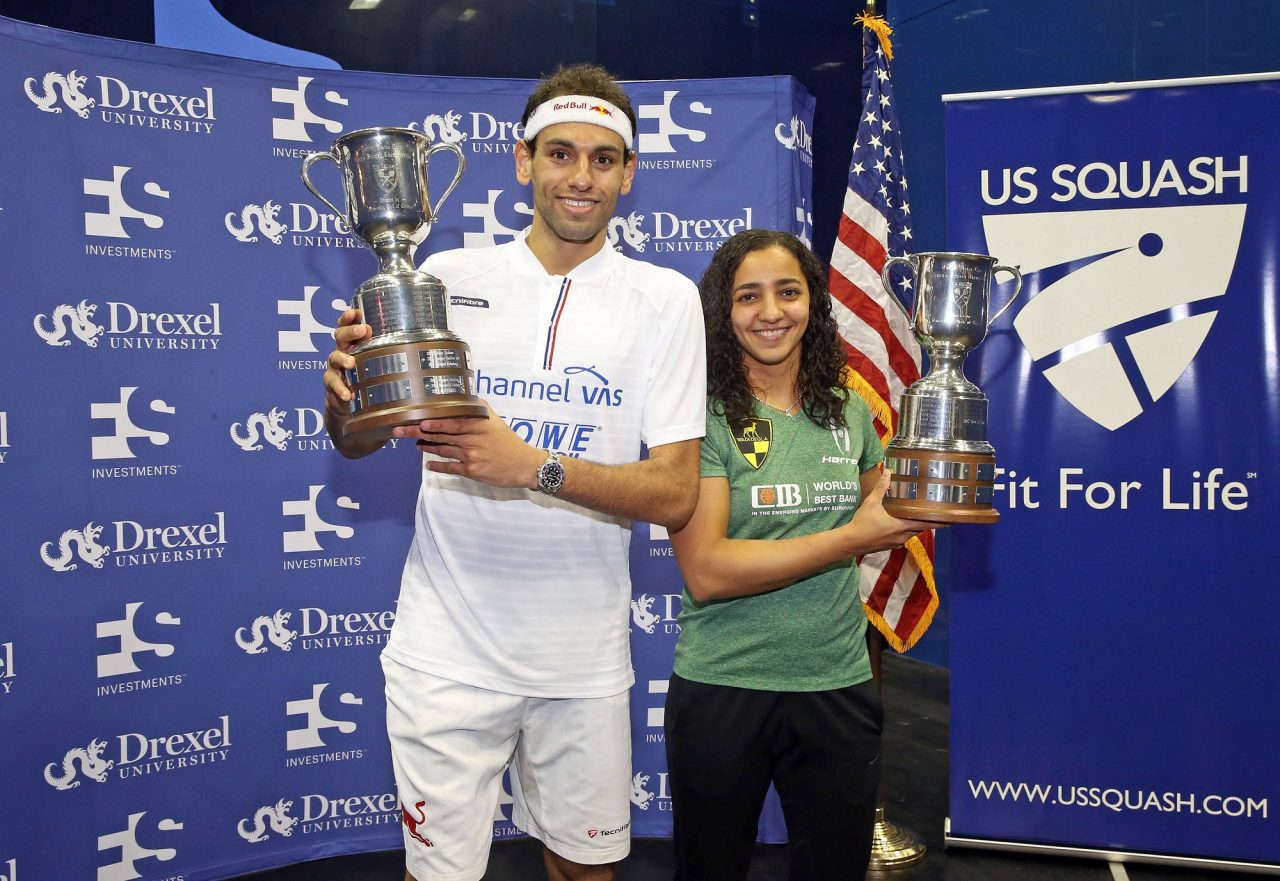 The world’s top squash players will compete for the first PSA Platinum title of the 2019-20 season between October 5-12 at Philadelphia’s Drexel University as the draws for the 2019 FS Investments U.S. Open Squash Championships were released today.

The U.S. Open is one of eight prestigious Platinum events to take place during the 2019-20 PSA World Tour season, and this year’s tournament sees prize money increase by 10% to a record total of $371,000, which is split equally between male and female athletes for a seventh successive year.

Reigning champions Mohamed ElShorbagy and Raneem El Welily will return to defend their crowns, while men’s World No.1 Ali Farag and women’s World No.5 Nour El Tayeb will also aim to star in Philadelphia – two years after their U.S. Open triumphs saw them become the first married couple in sporting history ever to win the same major sports title on the same day.

World No.1 Farag leads the men’s draw and receives a bye into the second round where he will face either compatriot Karim Ali Fathi or England’s Daryl Selby. The 2017 tournament winner is seeded on the same side of the draw as the likes of World No.7 Mohamed Abouelghar, Peru’s World No.8 Diego Elias and former World No.1 Karim Abdel Gawad, who he could face in the semi-finals.

Seeded at the opposite side of the draw is defending men’s champion ElShorbagy. The World No.2 will take on either Spain’s Borja Golan or Mexico’s Arturo Salazar in round two.

The elder ElShorbagy brother is bidding to join Peter Nicol as the only men’s four-time U.S. Open champions, and is seeded on the same side of the draw as Germany’s 2018 finalist Simon Rösner, who along with New Zealand’s Paul Coll and Egypt’s world No. 3 Tarek Momen, who he could meet in the semifinals.

Home favourite Todd Harrity, who reached the last 32 in Philadelphia last year, will play Australia’s Ryan Cuskelly in round one. Meanwhile, Brooklyn’s Andrew Douglas and Connecticut’s Spencer Lovejoy take the wildcard spots and face England’s Declan James and Egypt’s Mazen Hesham, respectively, in round one.

In the women’s draw, World No.1 El Welily leads the line-up and will line up against either wildcard Laila Sedky or Egypt’s Nadine Shahin in round two.

The Egyptian is seeded to come up against France’s World No.3 Camille Serme, who won the tournament back in 2016, in the semi-finals and also has England’s No.1 Sarah-Jane Perry and New Zealand’s World No.6 Joelle King on her side of the draw.

Reigning World Champion El Sherbini is situated at the opposite end of the draw and faces either wildcard Sabrina Sobhy or Egypt’s Mayar Hany in round two.

The two-time runner-up will be looking to get her hands on the coveted trophy for the first time in her career, but has the likes of 2019 British Open winner Nouran Gohar, World No.5 Nour El Tayeb and home favourite Amanda Sobhy standing in her way on her side of the draw.

United States No.1 Sobhy receives a bye into the second round where she will take on either compatriot Olivia Fiechter or England’s Emily Whitlock. Other home interest comes in the form of Team USA No.2 Olivia Blatchford-Clyne, who faces England’s Lucy Turmel in round one, while World No.42 Haley Mendez takes on Australia’s former World No.1 Rachael Grinham.

Glass court action from the U.S. Open will be staged in Drexel University’s Daskalakis Athletic Center, while matches on the traditional side courts will be held at Drexel University as well as the Racquet Club of Philadelphia.

Matches from the glass court will be streamed live on SQUASHTV (rest of world), Eurosport Player (Europe only), the official Facebook page of the PSA World Tour (excluding Europe and Japan) and various broadcast partners.

Tickets start from $30 and are available for purchase through the tournament website. 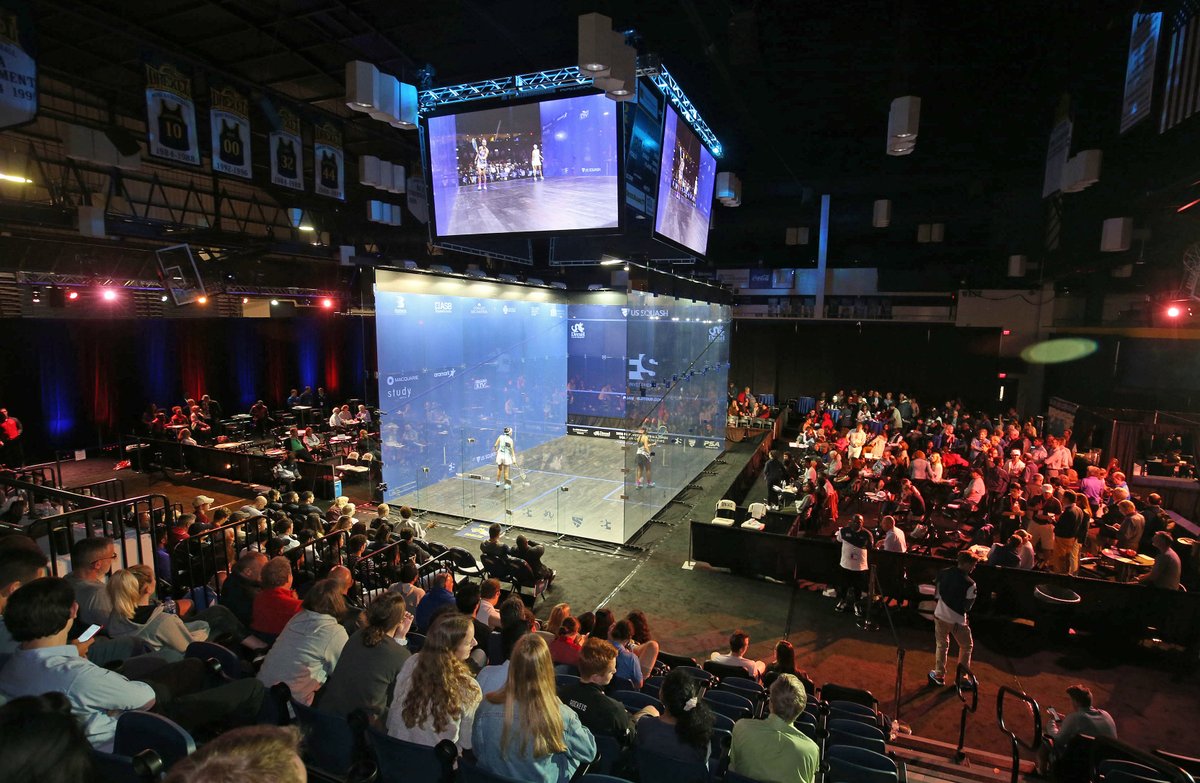 A packed audience at Drexel University for the US Open