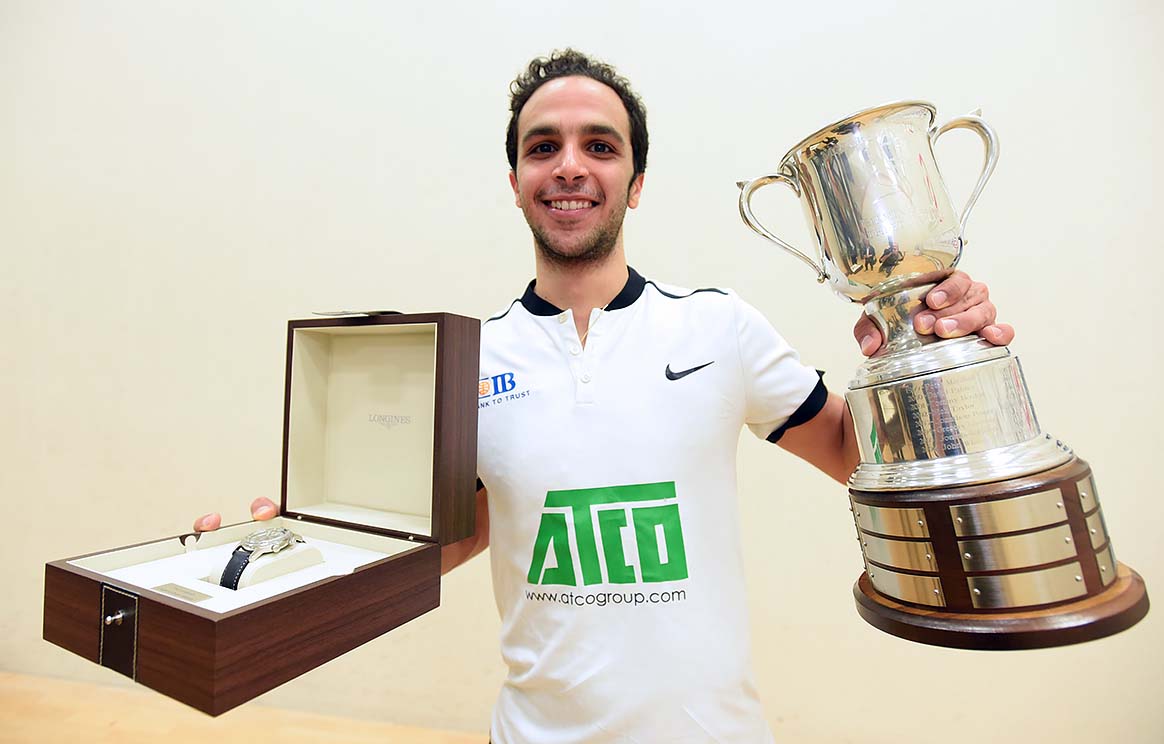 ‘I’m so happy. Diego is a great player and makes you work so hard. You just have to grind it out’
By MATT SCHOCH in Detroit

As he had all week, Mohamed Abouelghar took the long, tough road on Saturday to win the championship of the 2019 Motor City Open presented by the Suburban Collection.

Veteran referee Mike Riley described it as one of the five best matches he has ever called.

“I’m very, very happy and proud to put my name on the trophy with so many legends,” Abouelghar said. “It’s very special.”

Despite the long week, the 25-year-old Abouelghar showed off his endurance in the final.

“It was hard, man,” Abouelghar said. “Diego is such a great player. Sometimes he makes you work so much, you have to grind yourself out. He moves the ball very well around the court. At some point, you just have to retrieve and get the ball back.”

In game one, Elias raced through seven of the last eight points to win, 11-5.

Abouelghar came out aggressively in the second game. He took a 7-2 lead and won 11-6, then dominated game three for an 11-3 triumph. Elias recovered the win the fourth, 11-4, setting up a dramatic finish.

“It was a tough match, he played well,” said Elias, 22, who also reached the MCO semifinal in 2017. “It was really close, but I felt it was right in front of me this time.”

The pair played to a tie at 8-8 before Abouelghar won the final three points to raise the trophy.

“I doubt if it gets harder than that,” Abouelghar said. “We’re going to play many more battles. I’m happy I got this one, and I’m sure he’s going to come at me next time.”

Tournament organisers praised the champion’s resilience and also recognised Elias as an up-and-comer to watch.

“I’m confident that within the next 12-24 months, he’s going to be right up there near the top, in the top five in the world,” MCO co-chair Peter Schmidt said. “It’s great to have a fantastic final.”

Added Derrick J. Glencer, co-chairman of the MCO: “This happens a lot at our tournament, and a lot of people who end up winning our tournament go on to being world No. 1 and I can absolutely see (Elias’) future. It was a brilliant battle tonight.”

Abouelghar and Elias both said they plan to return to the MCO next season.

“People here make you feel home all the time,” Abouelghar said. “Every time I come back here, I feel like I never left. They take care of us, they make sure they put on a great event, the members are great. With all the history and fun, it’s just a great event.”

On the road to the title, Abouelghar knocked off top-ranked American Todd Harrity in four games, beat Englishman Adrian Waller in five games, and then topped friend and countryman Zahed Salem in four.

Fund-raising in conjunction with the MCO created revenue for Racquet Up Detroit, a youth development program that combines squash, mentoring and community service.

Tournament organisers presented Racquet Up Detroit with a check for $20,000 during the post-match ceremony.