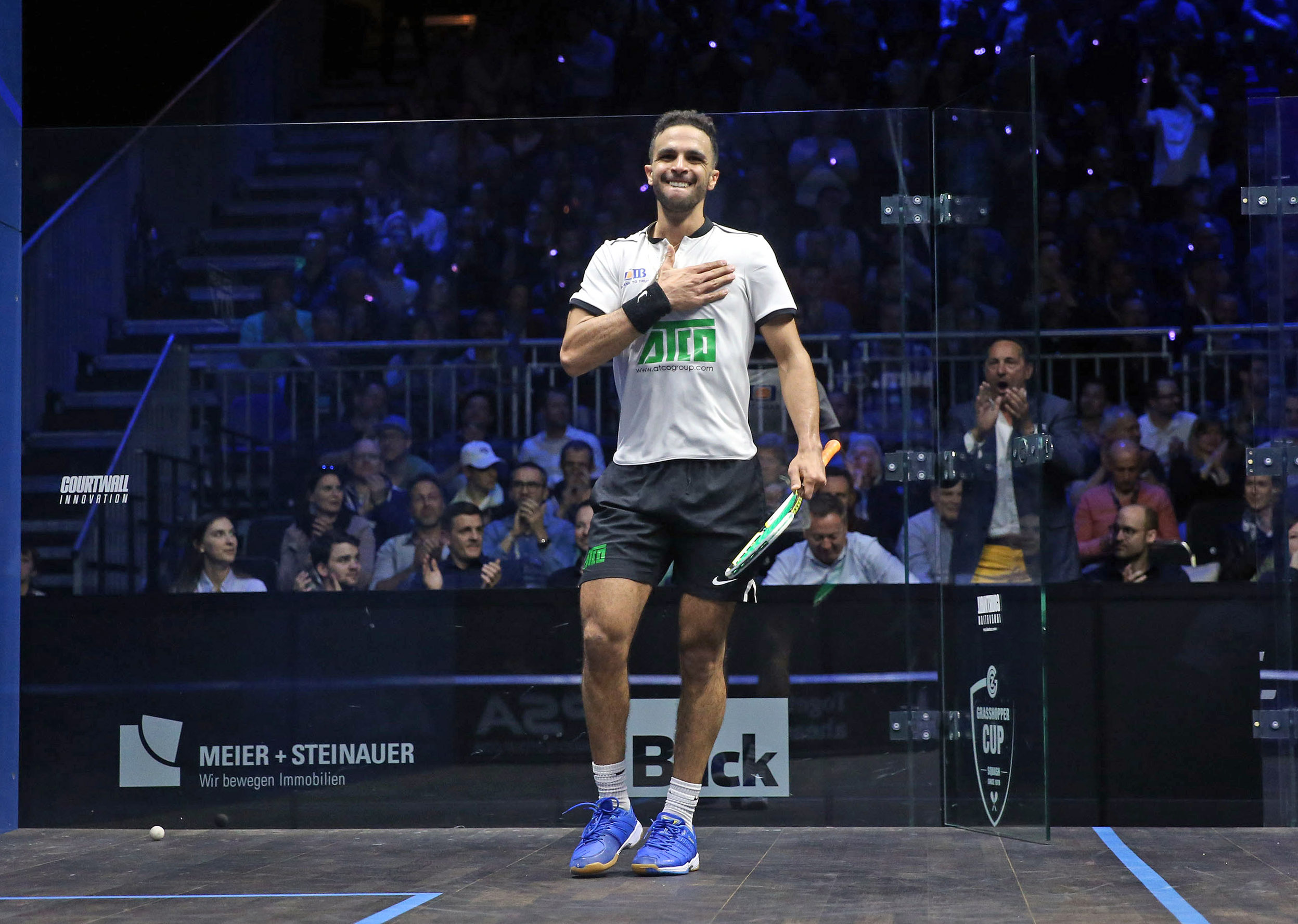 Farag became world champion and World No.1 earlier this month and came into this tournament having reached five PSA Tour finals in a row. But his 11-match unbeaten run came to an end against compatriot Abouelghar, who won 11-9, 5-11, 11-7, 11-9 after 51 minutes of high-quality squash.

Some sublime drops and breathtaking retrievals made for a spectacular conclusion to the day’s play – with Abouelghar prevailing to book a semi-final spot against World No.3 Tarek Momen.

“I’ve been knocking on the door of the top players since the beginning of the season, and I’ve never been able to turn it around my way,” Abouelghar said afterwards.

“It’s been a long process, and I’ve learned a lot from my previous matches. Thankfully, I have a great team around me that helps me learn from my losses rather than backing down. I’m happy with the way I dealt with it until the end, I never gave up, and I’m very happy to be through to the semis.

“There are very fine margins with these guys, you rest for a second and they eat you up. I told myself to never relax, never give him anything for free, and I’m happy that’s what I did and it paid off.

“I’ve played Tarek every other tournament, we’ve played four times and he got the better of me every time. I’m looking forward to it, and I’m pretty sure it’s going to be a great match for the crowd.” 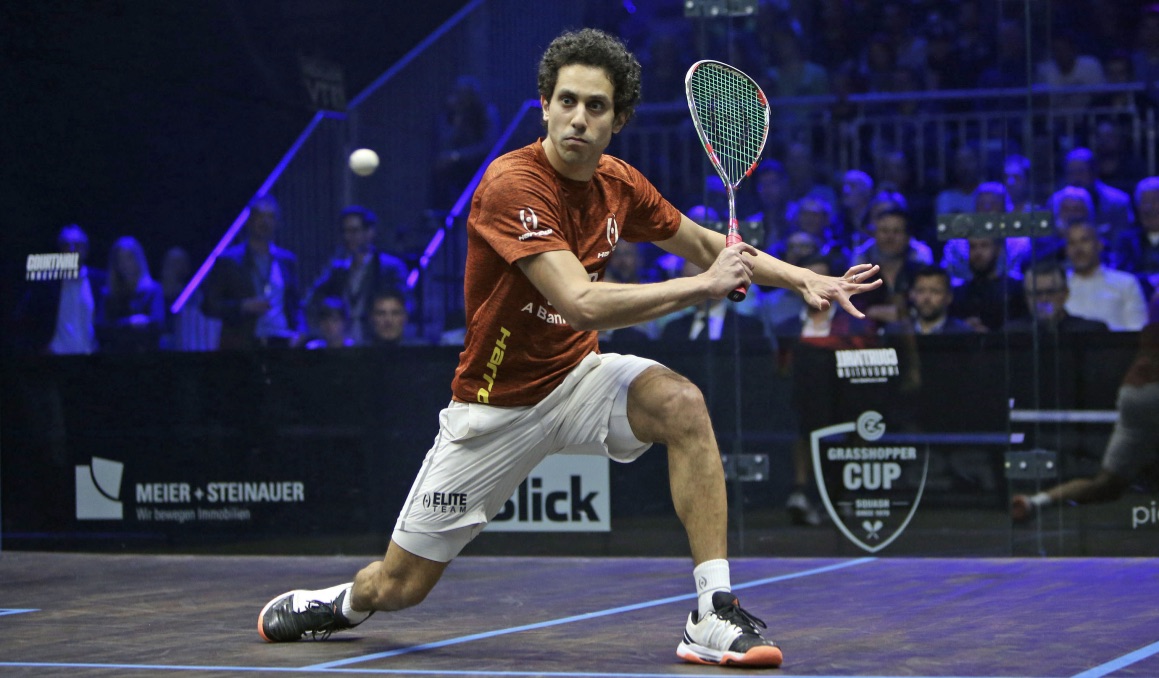 Eyes on the ball: Tarek Momen looks focused as he beats Saurav Ghosal

All four semi-final spots at this tournament will be taken up by Egyptians for the first time in history, after Momen, World No.2 ElShorbagy and World No.4 Karim Abdel Gawad all claimed wins to reach the last four.

Momen came from behind to record a 3-1 win over India’s Saurav Ghosal as he took one step closer to a third successive PSA Tour final. The 31-year-old has reached the title deciders at the PSA World Championships and the Canary Wharf Classic this month and beat Ghosal by a narrow 9-11, 11-6, 11-6, 14-12 margin to earn his semi-final spot.

He will go up against Abouelghar for the fifth time this season, with Momen winning every single time. 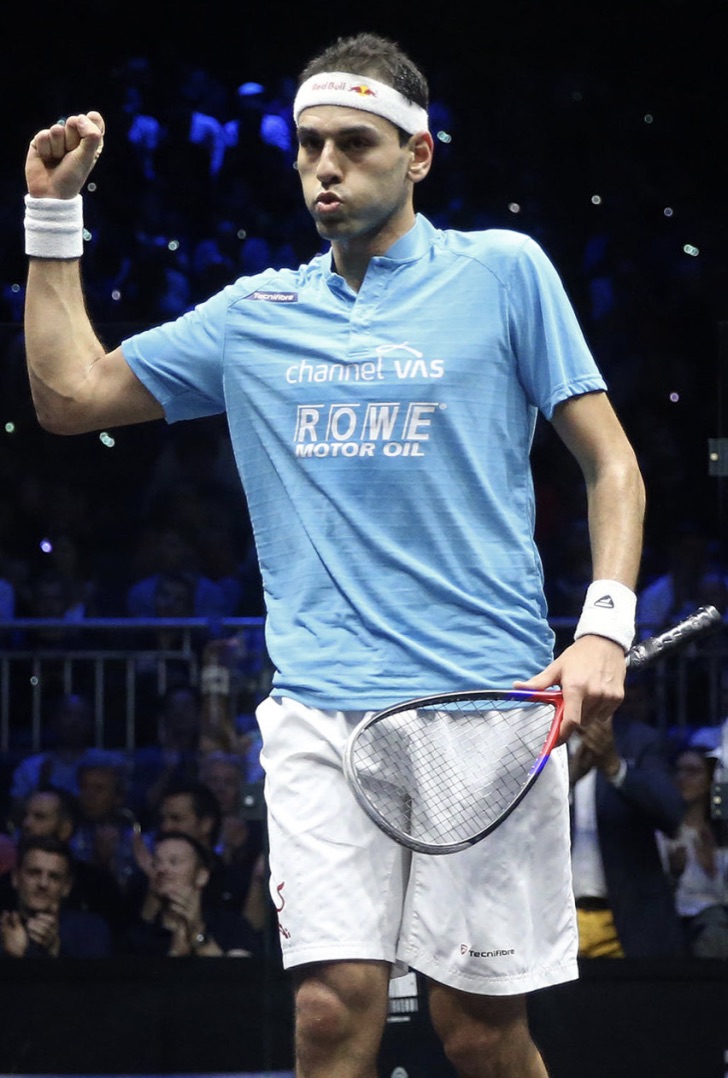 “Today, the first game made a huge difference. You can’t afford to let Saurav go 1-0 up. I was very happy to not lose my head in the second and the third. In the fourth, he made it really difficult for me, so I had to fight. Maybe the experience that I’ve gained has finally made a difference.”

ElShorbagy (right) and Gawad will contest the other semi-final after respective wins against Colombia’s Miguel Rodriguez and Germany’s Simon Rösner.

Rodriguez was making his 450th PSA Tour appearance and beat ElShorbagy to win the British Open last May. The Egyptian was sublime in Zurich though as he put in a powerhouse performance to win 11-4, 11-9, 11-5.

“He won the British Open for a reason, he played really well that week,” said ElShorbagy. “We always have good matches together, he’s such a nice guy and we get on well together off court. To go on court and finish in three in big matches like this, it doesn’t happen very often, so you take it any day. I’m really happy to be in the semi-finals, like last year. I always feel welcome here when I come back, and I look forward to being back tomorrow.”

Gawad, who like ElShorbagy is a former World No.1 and former World Champion, dismantled World No.5 Rösner after putting on a brilliant display of attacking squash at Halle 622.

The 27-year-old is traditionally a slow starter, but he found his rhythm right from the off against Rösner and hit some stunning winners throughout the match as Rösner had no answers to Gawad’s brilliance.

Gawad and ElShorbagy will line up against each other for the third time this season. Gawad beat his fellow Egyptian en route to winning the Black Ball Open in December, while ElShorbagy achieved wins at the J.P. Tournament of Champions and the Oracle NetSuite Open.

Karim Abdel Gawad dives across the court against Simon Rosner

“I’m expecting a very tough match [with ElShorbagy], Mohamed’s results and his record speak for itself. We’ve battled a lot since we were juniors and under 11 years old, so tomorrow I have to focus and play my best squash without any pressure. Hopefully I can play as well as I did today.”

The semi-finals of the Grasshopper Cup will take place at 19:00 on Saturday March 30. Action will be shown live on SQUASHTV (rest of world) and Eurosport Player (Europe only).

A women’s exhibition tournament, featuring World No.3 Nour El Tayeb, World No.4 Camille Serme, World No.5 Joelle King and World No.28 Nele Gilis, will take place at 16:00 and will be shown live on SQUASHTV (rest of world), the official Facebook page of the PSA World Tour and via PSA SQUASHTV on YouTube.