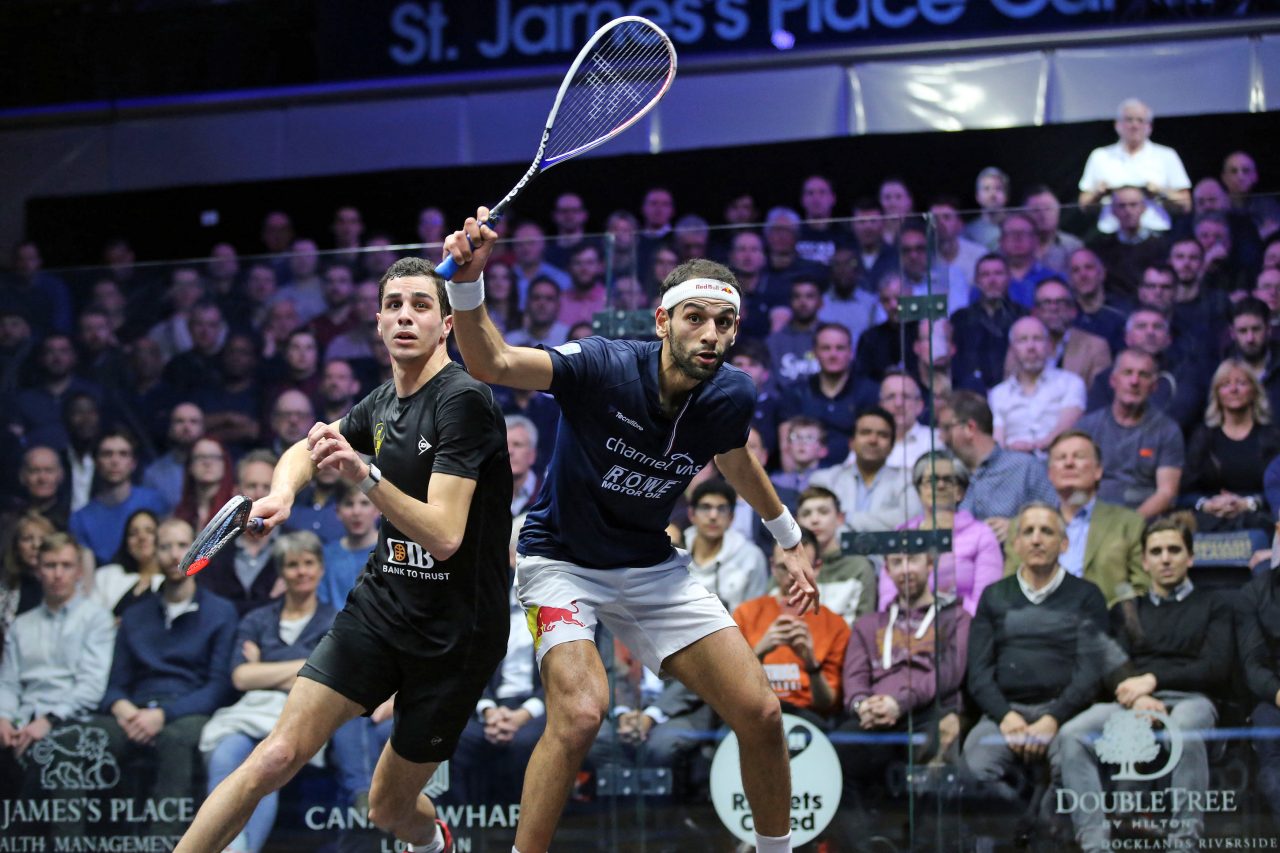 Mohamed ElShorbagy (right) was voted male player of the season and his epic battle with Ali Farag in the final of the St. James’s Place Canary Wharf Classic was named the men’s match of the season

Egyptian pair Mohamed ElShorbagy and Nour El Sherbini have been crowned the 2019-20 PSA Players of the Year after being chosen by a combination of votes from both the PSA Awards Committee and fans on the PSA World Tour website.

ElShorbagy has picked up the PSA Male Player of the Year award for the fourth time in his career after a season that saw him collect four PSA World Tour titles, including the J.P. Morgan Tournament of Champions crown, and overthrow 2018/19 Male Player of the Year Ali Farag to reclaim the World No.1 spot after an 11-month absence.

ElShorbagy also got the better of Farag to win the St. James’s Place Canary Wharf Classic in March, which was the final men’s PSA World Tour event to take place before the suspension of the tour due to the global COVID-19 pandemic. That match was named by squash fans as the PSA Men’s Match of the Season.

Kiwi Paul Coll came second in the voting following the best season of his career to date. In addition to cementing himself as a top five player, Coll claimed honours at the Open de France in September, while he also finished as runner-up at the PSA Men’s World Championship, Windy City Open presented by the Walter Family and the Troilus Gold Canada Cup.

Meanwhile, El Sherbini has been named the PSA Female Player of the Year for the third time following a season which saw her win two PSA World Tour titles and reach the final of all four tournaments she competed in.

A knee injury kept El Sherbini out of action until October but, in her first PSA World Tour event in four months, she stunned the squash world when she toppled World No.1 Raneem El Welily in front of the iconic Great Pyramid of Giza to capture her fourth PSA Women’s World Championship trophy on the day of her 24th birthday.

El Sherbini also overcame El Welily to win the Windy City Open trophy in March, while she achieved runner-up finishes at the Tournament of Champions and Black Ball Open, the latter of which was the final women’s PSA World Tour event to be held before the tour suspension. 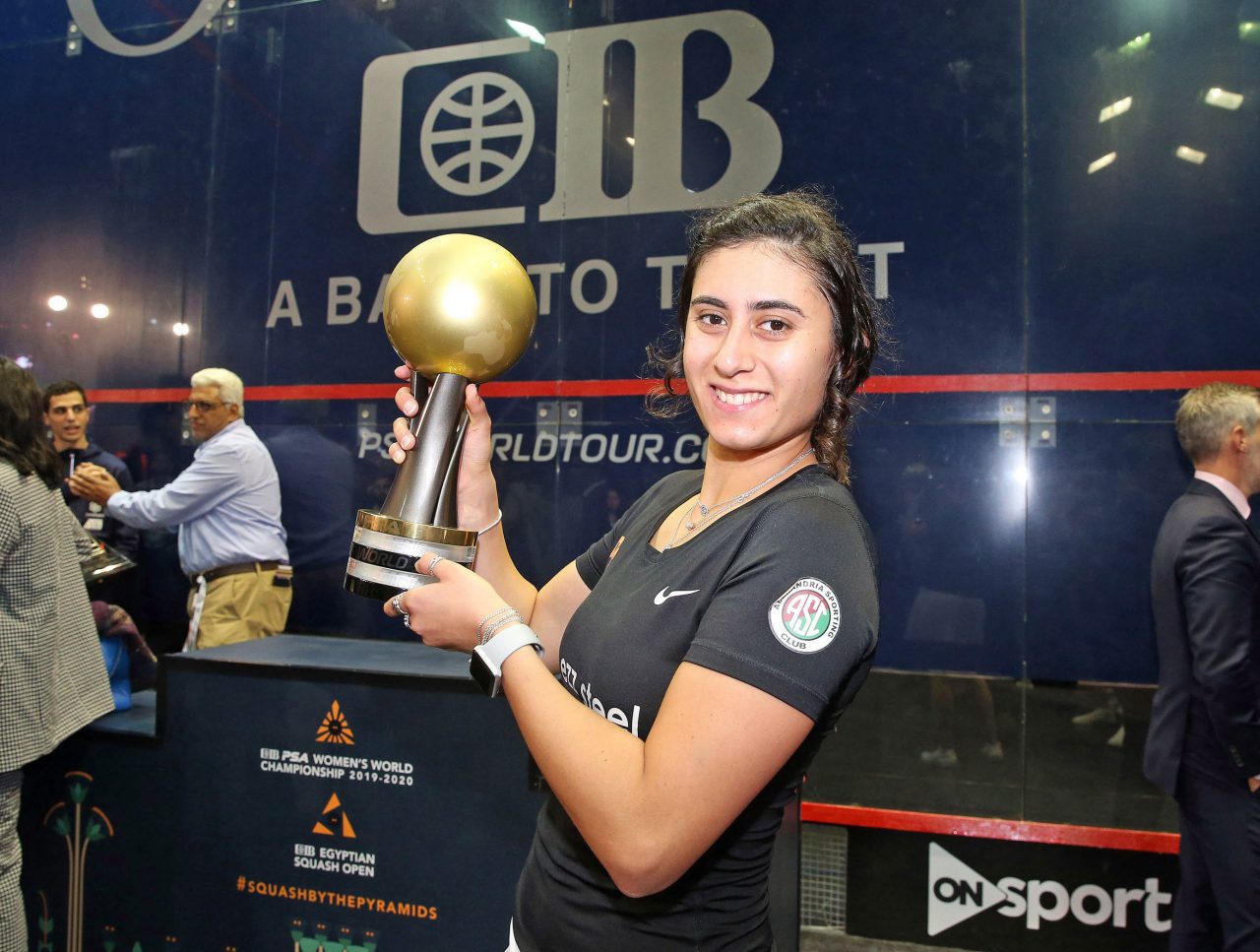 El Welily, the 2018-19 PSA Female Player of the Year, finished second. The 31-year-old held onto her World No.1 ranking for the entirety of the season and won the Oracle NetSuite Open, as well as reaching finals at the PSA Women’s World Championship, China Open and the Windy City Open.

For the fourth year in a row El Welily won the women’s PSA Spirit of Squash Award. The award is voted for by PSA players and is presented to the players who best demonstrated true sportsmanship during the season. The men’s award went to Ali Farag, who wins it for the fourth time in five years.

Egypt’s Hania El Hammamy collected the PSA Young Female Player of the Year award after beating El Sherbini to win her maiden PSA Platinum tournament at the Black Ball Open. The 19-year-old also claimed a notable semi-final finish at the PSA Women’s World Championship, coming from two games down to stun World No.4 Camille Serme in the last eight.

Her compatriot Mostafa Asal took the men’s honour after breaking into the top 20 and reaching his first ever PSA Platinum quarter-final at the Tournament of Champions – beating former World No.1 Gregory Gaultier en route.

The Tournament of Champions was also the scene for the newly-created PSA Moment of the Season award, which went to France’s Camille Serme after a spell-binding run inside New York’s Grand Central Terminal saw her beat the world’s top three players – El Welily, Nouran Gohar and El Sherbini – to capture her first major trophy in three years.

This year also saw the creation of two new awards to celebrate outstanding achievement on the PSA Challenger Tour, with Mexico’s Leonel Cardenas and Canada’s Danielle Letourneau being crowned the inaugural PSA Challenger Tour Players of the Year.

Cardenas won titles at the Kelowna Open and Securian Open throughout the 2019-20 season, as well as achieving runner-up finishes at three other events. Meanwhile, Letourneau claimed a trio of title wins – Seattle Open, Calgary Open and Queen City Open.

The final award, the PSA Services to Squash award, went to former World Squash Federation (WSF) Media Director Howard Harding. The award was presented by the PSA Foundation in recognition of his outstanding commitment and service to the sport over 20 plus years.

Harding had served as WSF Media Director since 1996 before standing down earlier this year, while he also held a similar role at both the PSA and the Women’s Squash Association (WSA) until 2014. 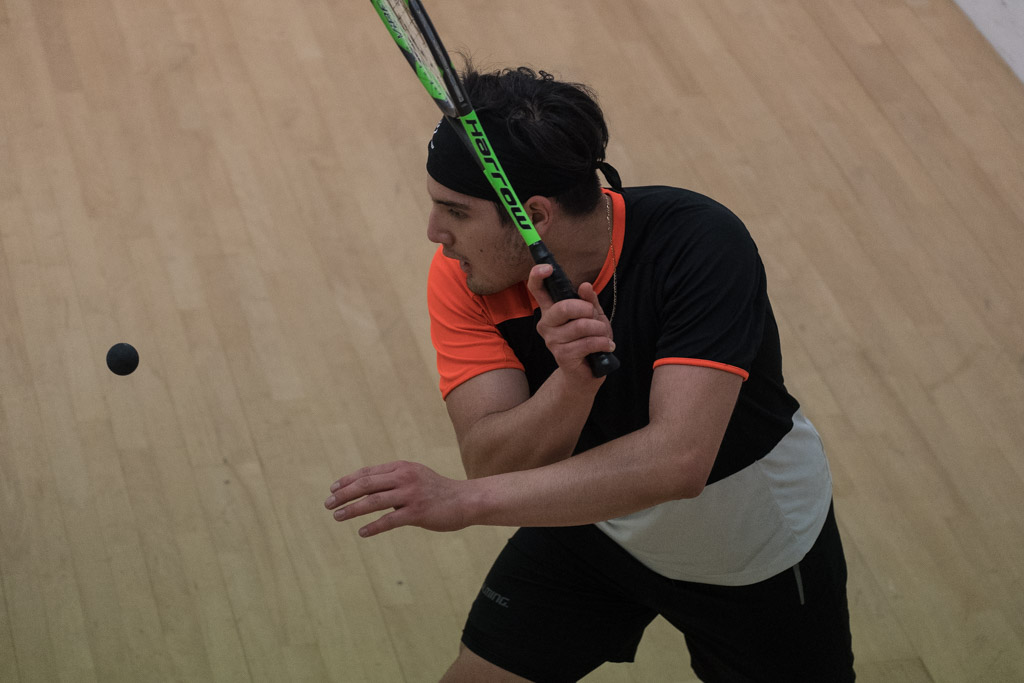 Leonel Cardenas in action at the Kent Open

EDITOR’S NOTE: It was good to see Mexico’s Leonel Cardenas being recognised as the PSA Challenger Tour Player Of The Year. I saw his skills close up during the Colin Payne Kent Open, sponsored by Trident Machines, at Tunbridge Wells early last year.

He reached the semi-finals, going out to eventual runner-up Rui Soares, from Portugal, and showed what a great prospect he is.

I wrote at the time:

Cardenas may have lost the match, but he certainly won plenty of friends with his stylish play. He is an unknown quantity in the UK, but a little research on SquashInfo reveals that he won two tournaments in 2018, one in Canada and one in Guatemala. His triumph in the $10k Lethbridge Open in Canada saw him power through the draw unseeded to beat No.2 seed Nick Sachvie in the quarters and No.1 seed Charles Sharpes in the final.

In November, he also went toe to toe with Shawn De Lierre for 101 minutes before losing 11-8 in the fifth game in the Saskatoon Boast.

You might say, well, who hasn’t been on court with Shawn for 101 minutes? But we are talking about an 18-year-old junior who refused to be deflected by Shawn’s own unique approach to clearing the ball in various parts of the court.

Leo hits the ball sweetly, has a good hold on his forehand, floats a nice, high backhand tight down the wall, smacks kill shots at a ferocious pace, and, some 5,000 miles away from home, is not afraid to play an aggressive, attacking game against a more experienced opponent.

A lot of knowledgeable squash fans in Royal Tunbridge Wells are looking forward to watching his career progress.