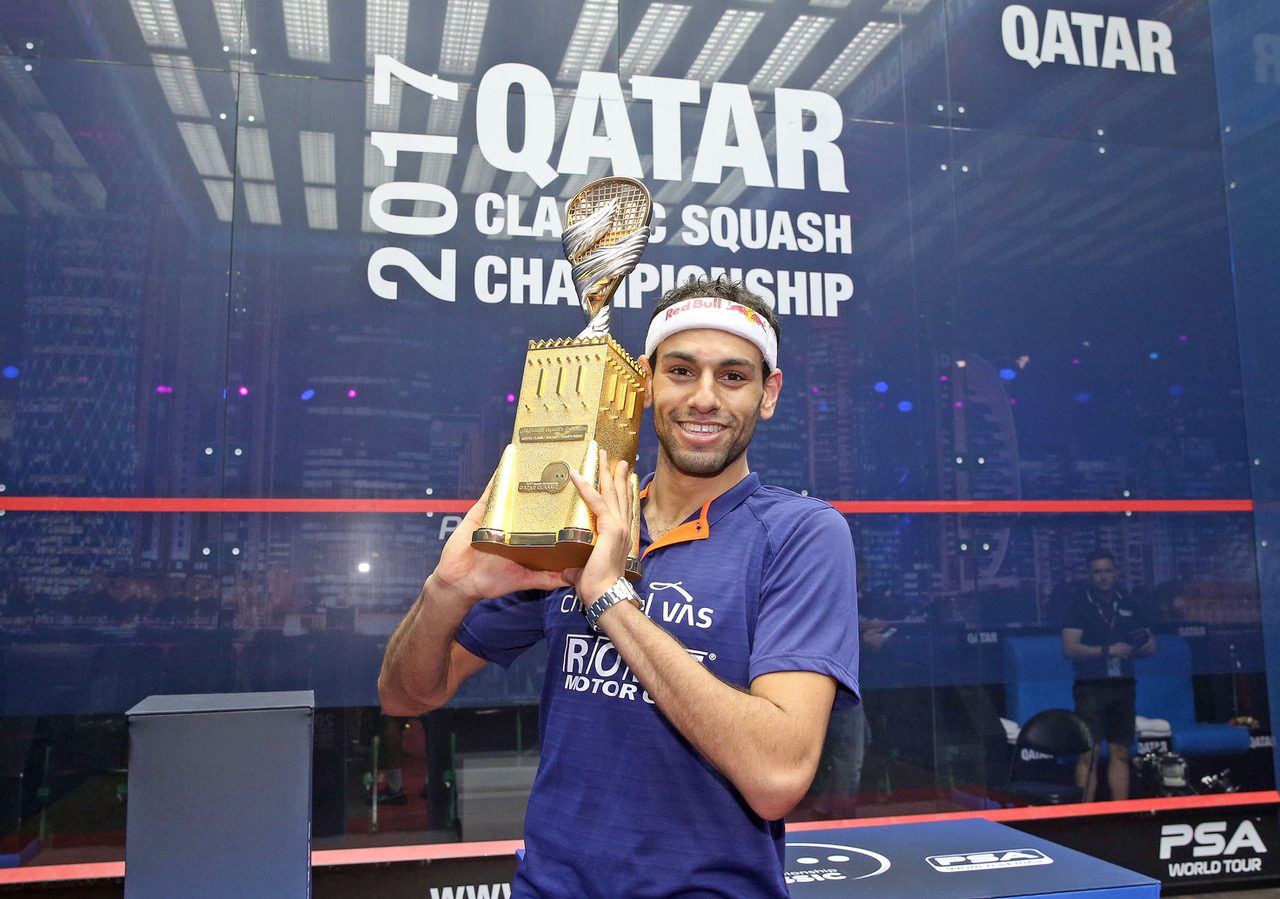 Mohamed ElShorbagy savours his success in Qatar in 2017

‘I have reached six finals in six years; I always feel at home on that court’
By SEAN REUTHE

World No.1 Mohamed ElShorbagy is relishing the prospect of defending his Qatar Classic title between October 27 – November 2 and says that he feels at home at the Khalifa International Tennis & Squash Complex after reaching six successive finals there.

With three Qatar Classic titles to his name, ElShorbagy is the most successful player in the tournament’s history, and he also reached the World Championship final here on two occasions, in 2012 and 2014.

The 27-year-old has a rich vein of form in Doha, winning 29 of his last 32 matches in the country’s capital, and he looking forward to returning to a location where he has dominated his opponents in recent years.

“I always love playing there,” said ElShorbagy. “I have made six finals in the last six years, so I always feel that if there is somewhere where I am the hardest to beat then it is definitely Qatar because I always feel at home on that court. If someone is going to beat me there then it will be like they have kicked me out of my home.

“I really look forward to going back there and trying to defend my title. I had a tough draw there last year and I stepped up and won the tournament. I really hope I can go back there and do it one more time and let’s see what happens, there are a lot of good players right now playing really well but hopefully I will be up to the task and be able to defend my title.”

ElShorbagy’s title win in Qatar last year was one of eight PSA Tour titles the Bristol-based Egyptian picked up during a dominant 2017/18 campaign, with a 3-1 victory over fellow Egyptian Tarek Momen seeing him capture his third trophy in Qatar.

He started this season with a final appearance at the Oracle NetSuite Open in San Francisco – where he lost out to World No.2 Ali Farag – before beating World No.5 Simon Rösner to win the U.S. Open a fortnight ago, and he is anticipating some strong challenges in Qatar as he bids to retain his crown.

“It’s not going to be easy with how strong the draw is and each season it gets harder because each player studies me more and wants to beat me more,” he said.

“I try to get better each season too, it gives me a reason to get better each season. I have been World No.1 for three years exactly now and for me the greatest in each sport has consistency. The longer you stay, the longer they study you and find weaknesses, and the longer you stay at the top that means that you have been able to protect those weaknesses from being exposed as much as possible.

“For me, the same means going backwards, so if I stay the same as last season then I might not win this season. I have to keep getting better and keep challenging myself more every day. I made that mistake last time when I was World No.1, I stayed the same and didn’t motivate myself to get better, so the experience I have this time is that I know that if I stay the same someone is going to hunt me down.”

ElShorbagy receives a bye through to round two, where he will play either Qatari No.2 Syed Azlan Amjad or Hong Kong’s Tsz Fung Yip.

The Egyptian is drawn on the same side of the draw as World No.5 Simon Rösner and World No.8 Paul Coll, while Farag, Momen and World No.6 Miguel Angel Rodriguez are involved on the opposite side.

A prize fund of $177,750 will be up for grabs, as will a place at the PSA World Tour Finals, with the winner automatically qualifying for the season-ending tournament.

Matches held on the glass court will be shown live on SQUASHTV (Rest of World), Eurosport Player (Europe only) and DAZN (Japan), while the semi-finals and finals will be shown on major broadcast channels around the world, such as BT Sport, beIN Sports, Fox Sports Australia and Astro

Entry is free for rounds one, two and three, while tickets can be purchased for the quarter-finals onwards from the tournament website.