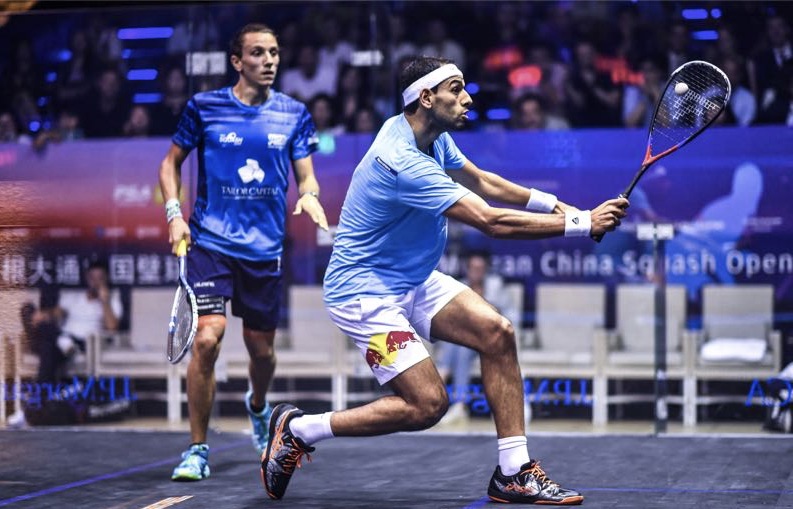 ‘Lucas and I used to train together; I’m so glad to see him reaching his potential’
By ELLIE MAWSON – Squash Mad Correspondent

Egypt’s World No.2 Mohamed ElShorbagy survived a scare against France’s World No.35 Lucas Serme after he was forced to come from 2-0 down to book his place in the quarter finals of the J.P. Morgan China Squash Open PSA World Tour Gold tournament.

ElShorbagy, who won the China Open title back in 2016, found himself staring down the barrel of defeat as Serme started strongly on the glass court atop the Peninsula Shanghai to take a surprise lead.

“Lucas played so well today,” said former World No.1 ElShorbagy afterwards. “We used to train together back in Bristol and have played together for so many years. I’m really happy for him to be raising his level that way. He has so much potential and I’m glad that he’s living up to that now.

“For me, that was the first match of the season and it’s always a tricky one. We had a tough battle at the beginning of the third game and from that moment I pulled through and had control of the match after, but all credit to him. I had to dig in deep to win this match and I’m very happy to live another day here.”

The Egyptian will face World No.23 Leo Au in the next round after the Hong Kong player secured a surprise victory over No.6 seed Mexico’s Cesar Salazar to advance at the tournament. 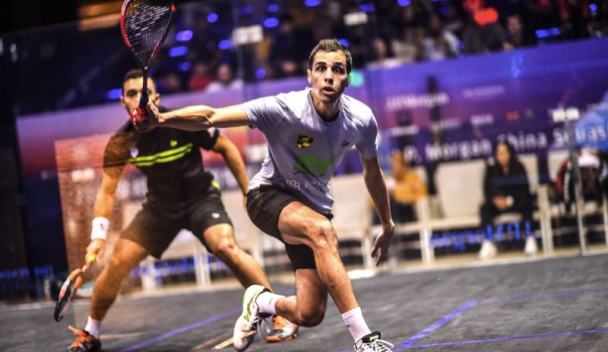 World No.1 Ali Farag secured a last eight berth after he defeated compatriot and World No.31 Youssef Soliman 3-1 to take another step in the tournament in Shanghai.

“I’m very happy,” said the 27-year-old from Cairo. “First match of the season is never easy, especially when it comes against someone like Youssef. We know each other’s games pretty well, we grew up in the same club and now I play for Wadi Degla, but we still play together a lot. I’m very happy to get away with a 3-1 win here.

“Our sport is beautiful, we get to put it anywhere in the world and to put it on top the Shanghai Bund is amazing. I’m really happy that fingers crossed the rain stays out of the area and we can keep playing on this venue.”

He will take on England’s Tom Richards in the next round after the former World No.12 defeated Egypt’s World Junior champion Mostafa Asal to reach the quarter finals.

“I’m expecting a lot of firey shots [from Tom Richards],” continued Farag. “I wouldn’t say he has a traditional English game, he likes to go for it and I’ll try to keep my discipline and not get too erratic with him and we will see how it goes.”

Elsewhere in the men’s draw, Farag’s compatriot Mazen Hesham upset the seedings after he defeated England’s World No.22 Adrian Waller on the side courts.

The Egyptian shot maker has shown that he is getting back to his best after being plagued with injury throughout the last few years as he displayed another strong performance in China.

“Today was really good,” said Hesham following his win. “He was pushing me really hard and I have never seen him play this well against me before. It was very tough, I just kept strong mentally and I think that made the difference.

“Today I pushed a lot harder than I do in training. I just go day by day and hopefully I have done enough work to push this hard and this week will show with how my body deals with it.”

Next up for Hesham is India’s World No.10 Saurav Ghosal after his controlled performance saw him down Hong Kong’s Tsz Fung Yip to reach the last eight of the PSA World Tour Gold tournament.

In the women’s draw, top seeds Raneem El Welily and Nouran Gohar both prevailed to reach the last eight after they secured 3-0 wins over the Netherlands’ Milou van der Heijden and Canada’s Danielle Letourneau, respectively.

El Welily, who is the defending champion, got her title defence off to the perfect start as she smoothly despatched World No.32 van der Heijden in straight games and will now face compatriot and World No.14 Salma Hany in the next round after she defeated Nada Abbas on the side courts.

“I’m definitely happy to start the tournament with a 3-0 win against Milou,” said El Welily afterwards.

“She’s skilled with the racket and has such great technique and you could see she has got different plans and tactics on court. She definitely worked me on court and I’m hoping that I can continue that form on here tomorrow.

“I’ve had good memories here and bad ones, I’m just going with the flow and seeing what happens but hopefully it will be a good memory.”

No.2 seed and 2019 British Open champion Gohar also picked up from where she left off last season with her good form as she comfortably claimed a 3-0 victory over Canada’s Letourneau to reach the quarter finals.

The three-time China Open runner-up will face compatriot Yathreb Adel in the next round after she came from 2-0 down to upset the seedings and knock out England’s Victoria Lust.

“I’m always looking forward to this tournament,” said World No.4 Gohar. “You don’t get a lot of chances to stay in such a beautiful hotel and such a prestigious one. The venue is one of the best in the world and I have great memories here.

“It’s the first tournament of the year so that makes it extra special as well because you want to prove yourself and see how the summer training has paid off.

“I’ve been in the final three times so I hope I can break a little bit. It’s just one match at a time, I’m in the quarter finals which I’m really happy about and I’m just looking forward to the next match and we will see what happens next.”

Continuing the good form for the Egyptians in Shanghai were World No.5 Nour El Tayeb, World No.15 Hania El Hammamy and World No.23 Nadine Shahin.

El Tayeb cruised past Australia’s former World No.1 Rachael Grinham in just 19 minutes to book her place in the quarter finals. While El Hammamy and Shahin both overcame higher-ranked opposition to reach the last eight stage.

World Junior champion El Hammamy held her nerve to hold off a comeback from Hong Kong’s World No.10 Annie Au, with the two playing out an entertaining battle on the side courts, which eventually went in the favour of the young Egyptian.

“I’m happy with this win,” said El Hammamy afterwards. “I played Annie once last season and I lost in three in 20 minutes, so I came here today and I wanted to do my best and perform better than last time. I definitely had a game plan compared to last time and I’m happy I managed to stick to that.

“I’m starting the season with confidence. Finishing last season at my highest ranking has just given me more confidence and I’m hungry for more.”

El Hammamy will face the only non-Egyptian left in the women’s draw – New Zealand’s Joelle King – for a place in the semi-finals after the World No.6 battled back from 2-1 down against World No.20 Zeina Mickawy to advance at the tournament.

“First tournament of the season, I think everyone comes in not really knowing where they sit,” said King afterwards.

“Everyone puts in a lot of work over the summer and it’s the first challenge of the season so I’m really pleased. Probably more with my mental performance – Zeina is one of the up and coming players who has such an amazing raw game and I had to dig really deep to come back from 8-4 down in the fourth.

“Over the summer, Laura Massaro has actually come on board, as someone who I work with alongside Hadrian [Stiff] and I actually drew a little bit of inspiration from her. I’ve been on the backend of many matches against her where she has come back and beaten me and I think I just tried to dig out some experience.”

Action from the quarter finals of the J.P. Morgan China Squash Open takes place at 15:00 local time (GMT+8) tomorrow (Friday September 6) at the SECA Academy before play moves to the glass court in the evening at the Peninsula Shanghai.