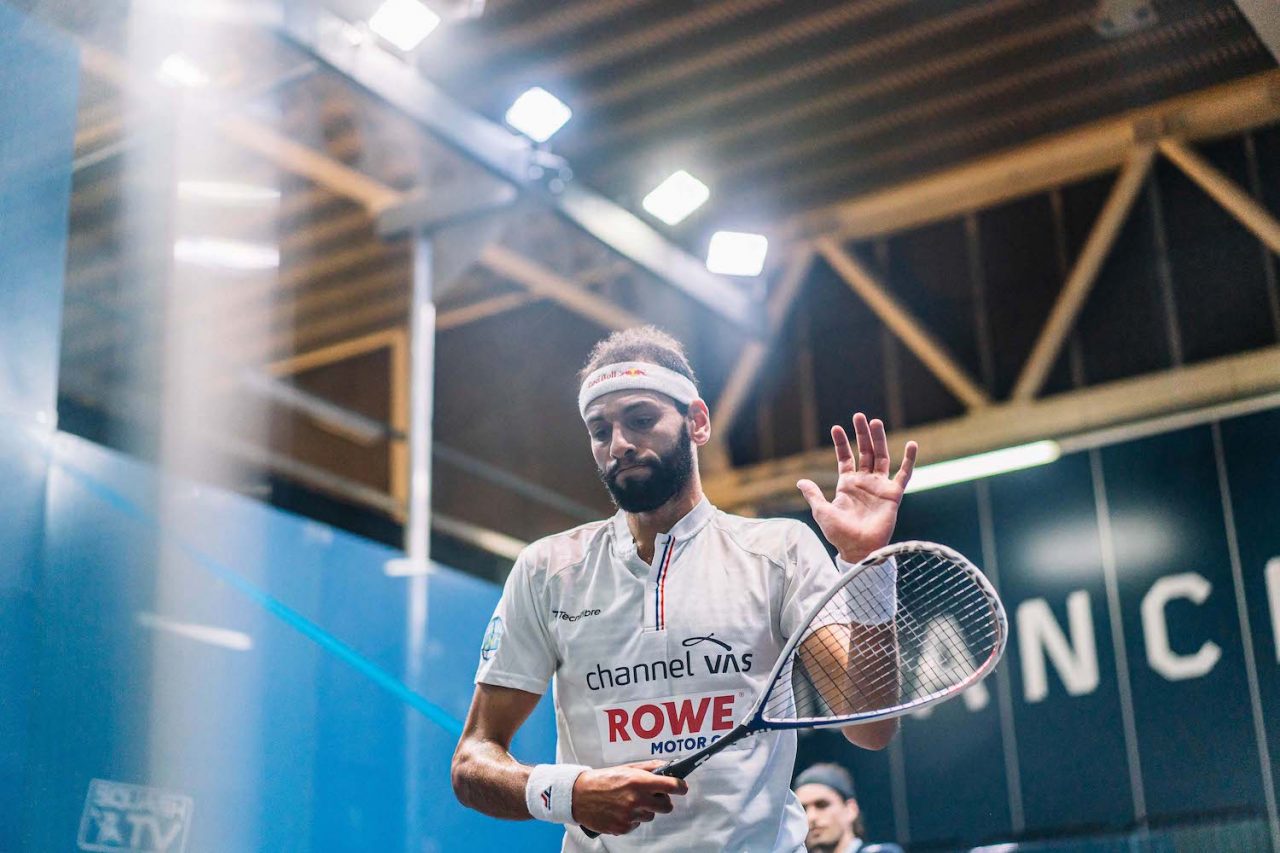 World number one Mohamed ElShorbagy finished strongly to win an 84-minute thriller against Paul Coll to book a place in the final of the 2020 Manchester Open against fellow Egyptian Karim Abdel Gawad.

World No.3 Gawad beat ElShorbagy’s younger brother Marwan in the semi-finals and admitted that his fitness levels could be better.

Mohamed, on the other hand, has emerged from lockdown full of hunger and has been filmed on social media training hard with British number one Joel Makin, who is renowned as one of the fittest men in the game.

That clearly set him up for a brutal, physical battle with New Zealander Coll, whose training regime would put most club players in hospital.

ElShorbagy picked up the final men’s PSA World Tour title before the lockdown – winning the St. James’s Place Canary Wharf Classic – which came off the back of a quarter-final exit at the Windy City Open at the hands of Coll, who claimed his first ever win over the Egyptian at the sixth attempt.

“When you play with someone who has never beaten you and then they beat you for the first time, they believe now that they can beat you, so the mentality is completely different,” said ElShorbagy after reaching his 64th PSA final.

“I hate to say you learn from losing because why do I need to lose to learn? I want to win and learn within the match. I’ve been in this kind of situation against all kinds of great players, so I had to use my experience and be strong mentally. I definitely did that and it’s important to come back tomorrow fresh again.”

The 29-year-old surrendered a 6-3 lead in the third game as Marwan rattled off eight unanswered points, but Gawad finally converted his second match ball in the fourth to reach a 36th PSA title decider.

“Playing Marwan is always tricky, you never know what is going on in is head, he is the best on court in finding plans and changing plans,” Gawad said following the match.

“To be honest, after five months off doing very few exercises inside the house. I wasn’t feeling the best. Squash-wise, I can come back and still remember the shots, but the physical and mental side are most important for me.

“Every time I was leading in a training match, I would find myself losing the game and that is exactly what happened in both the third and fourth today, that is what I was trying to work on a lot.”

France’s Camille Serme will feature alongside three Egyptian players on finals day at the 2020 Manchester Open after she overcame World No.6 Hania El Hammamy in a thrilling five-game battle at the National Squash Centre to reach the women’s title decider.

El Hammamy’s win at the World Championship saw her overturn a 2-0 deficit to stun Serme and the 20-year-old came within a whisker of doing so once more.

The Egyptian battled back from two games down, but Serme was rock solid mentally in the fifth game and kept any nerves at bay as the top seed closed out an 11-6, 11-8, 11-13, 4-11, 11-9 victory. It’s the third time in succession that Serme has reached the final of the first event of the season after she won the opening event of the 2019-20 campaign, the Open de France, and reached the final of the China Open in 2018-19.

“In the fifth it was so close, I was thinking they [all the people watching] must be happy and enjoying it,” said 31-year-old Serme afterwards.

“I did learn a lot from the [World Championship] loss particularly. I felt like I had a lot of pressure when I played her at the World Championship and I don’t want to play with that pressure again, it’s too painful. Today I didn’t feel pressure even though she came back to 2-2, I was just trying to enjoy it.

“When you have no crowd [due to COVID-19 protocols] it feels like we’re playing an exhibition or a training match, but we still gave it our all. At the end I was just fighting for every point. I wasn’t sure if I could get to the finish line. I just wanted to make it hard for her but I just did it.”

Serme will contest the final with World No.3 and second seed Nour El Tayeb after she dispatched England’s Sarah-Jane Perry in four games.

El Tayeb had never lost to Perry in seven previous PSA World Tour matches but her 100 per cent record over the World No.5 did look in doubt when Perry held three game balls in the third with the scores poised at one game apiece. However, the Egyptian player wasn’t to be denied as she came back to take it, before controlling a comfortable fourth game against a tiring Perry to book her spot in her 22nd PSA World Tour final.

“It was one of those matches where I was not very happy with my squash performance, but I was happy with how I dug in and resisted,” El Tayeb said.

“Luckily, she made a few errors at the end, which I think was an outcome of me digging in. I am very happy with the win, for sure. Every time we play, she figures me out and keeps hitting straight lines and I am working hard on not being bothered by that. For now I am very happy with the head-to-head and I hope it doesn’t change because I think it is the only positive one I have [against players] in the top 10.”

The 2020 Manchester Open finals begin today (September 22) at 17:00 (GMT+1). Action will be shown live on SQUASHTV (rest of world), Eurosport Player (Europe only) and multiple mainstream broadcasters around the world such as BT Sport and ON Sport.