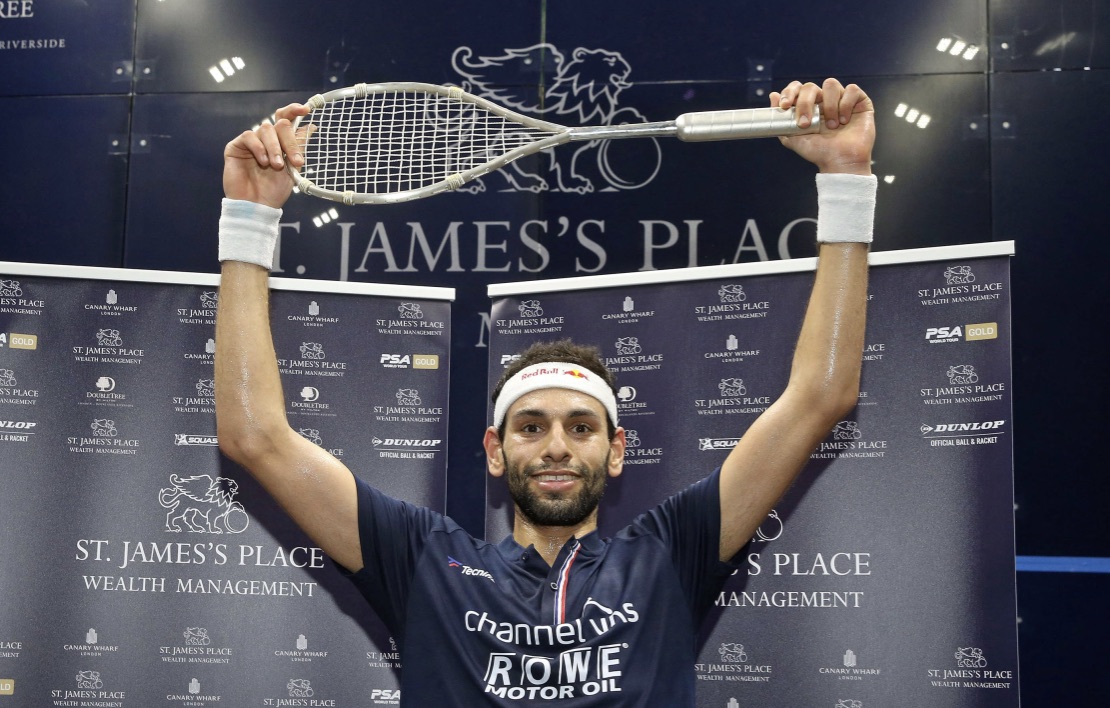 Egypt’s World No.1 Mohamed ElShorbagy claimed the St. James’s Place Canary Wharf Classic title for the second time in his career after he prevailed in a terrific final against World No.2, and compatriot, Ali Farag at the spectacular East Wintergarden in London.

The pair were meeting on the PSA World Tour for the 20th time in their careers, with ElShorbagy coming into this clash in London holding the 11-8 advantage. However, Farag had won their last meeting, a straight games victory to lift the FS Investments U.S. Open Squash Championship in Philadelphia in October. This was different… Dictated by reasons that were nothing to do with squash, the players chose to play in a competitive but totally respectful fashion that resulted in a spectacular match.

Today’s final started in brutal fashion, and continued in that vein for 80 minutes, with lengthy, high-quality rallies throughout. The first game saw work put into the legs of both players, with ElShorbagy eventually taking it, but it hurt ’the Beast’.

Farag aimed to used that to his advantage in the second, pushing further up the court whilst also trying to raise the tempo. He went out to a comfortable lead, but the World No.1 saved four game balls thanks to a couple of incredible cross-court nicks. Farag was able to recover to restore parity in the match, and he then held a lead in the third.

It looked like the former World No.1 would take the lead for the first time in the final, but a run of seven straight points from ‘The Beast’ took him back into a one-game lead, and he carried that momentum into the fourth game, and was only three points from the victory when Farag pushed once again.

The World No.2 won four of the next five points, as ElShorbagy tired, looking almost out on his feet. He was able to recover, though, saving three game balls in the process before eventually winning the tie-break 15-13 to claim a second Canary Wharf title.

“The longer you play on Tour, you realise you spend more time with your rival than your family. Ali is not just a rival for me, he is someone who really inspires me and he makes me want to be a better squash player every day,” ElShorbagy said after claiming the win.

“I have played so many different players from many different generations, but if I get asked who is the toughest opponent I have played in my life, it will be him. It keeps getting harder every time we play and he keeps bringing something different to the game. I am really glad to see him back and it is such pleasure to be on court with him again.

“This could probably be the last match we play this season, and to have the two best players, it was good to have that. Honestly, what we are facing right now is something that the whole world needs to come together for. I hope that everyone takes care of themselves, not just squash fans, but everyone. I hope this is something that goes away very fast and that we can just come back to normal.

“Thanks to the sponsors of the event. They chose such a wonderful event to sponsor and it makes it an honour to come back here every year. Playing in front of this crowd as well, without you guys, there would be no us. You make it special for us every single year.”

Farag said: “The season is suspended now so we wanted to give you a match to remember before we stop. We did our sport proud today. Mohamed and I have come to enjoy our battles a lot recently, especially when it is played in front of such an amazing crowd like you guys. We cannot be more grateful really.

It was a double Bristol celebration as Tom Ford won a place in the main draw at next year’s Canary Wharf Classic after winning tonight’s Wildcard Challenge.

He sealed the match with a volley into the nick off his opponent Joe Lee’s serve in an accomplished performance in which he never really looked troubled.

It was an emotional return to court for the 26-year-old, who was forced to take two years off the tour as he battled chronic fatigue.

He had won five titles and was ranked 60 in the world when his worsening condition meant he had no option but to temporarily give up the game he loves.

Speaking after his 11-6, 11-4 victory, Ford, who lives in Bristol and trains with world number one Mohamed ElShorbagy, said: “Life’s good. This is a proper celebration to be here in a lot of different ways.

“I kind of felt I’d already won just by being here. I would like to thank the tournament organisers for giving me this opportunity.”

Ford will appreciate the struggles of his opponent, who is also making his first tentative steps back onto the tour after suffering a prolapsed disc in his lower back.

Lee never quite got a foothold in the match to showcase his full array of skills, but both players got a healthy round of applause from the crowd for their efforts at the end of what still proved to be an entertaining match.

Pictures by STEVE LINE (courtesy of PSA) and PATRICK LAUSON