Alan Thatcher September 20, 2020 No Comments on Momen and Farag fall as Coll and Marwan move into Manchester semi-finals 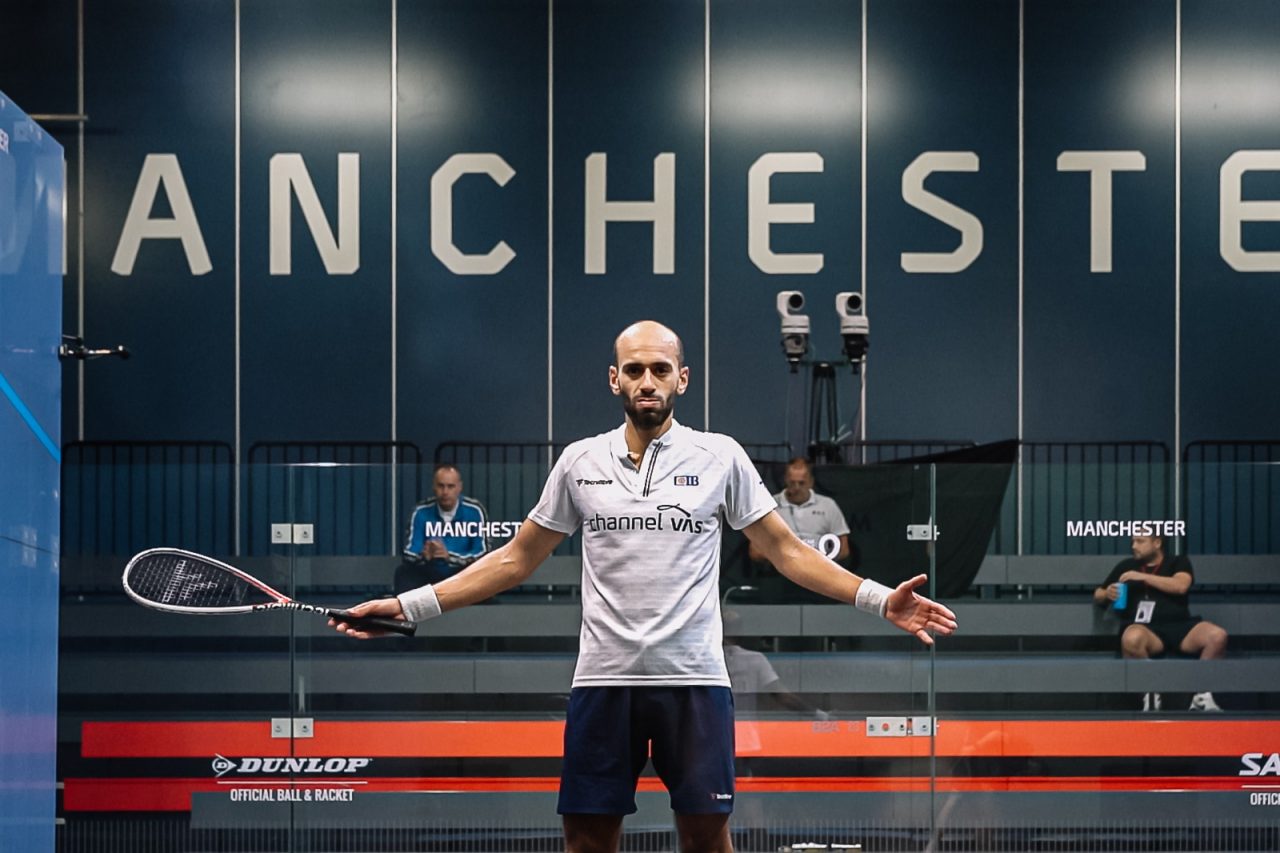 Ali Farag and Tarek Momen tumbled out of the Manchester Open as Marwan ElShorbagy and Paul Coll upset the seedings in squash’s first major tournament since the Coronavirus lockdown.

No.2 seed Farag fell to Marwan ElShorbagy in a battle lasting 89 minutes while world champion Momen, the No.4 seed, was taken out by New Zealander Coll in another dramatic five-setter.

This PSA Silver event is being played behind closed doors at England’s National Squash Centre but there has been plenty of drama despite the lack of a live audience.

Fans tuning in to the PSA Squash TV streaming channel will have enjoyed the return to action – not to mention the astonishing drama as the two players who won world titles in the same calendar year failed to reach the semi-finals in Manchester.

“I expected to win today, but I was very disappointed with the way I played,” said ElShorbagy. “I need to watch the match again and learn from the mistakes I made. I know the level I could play and I know I could play ten times better than this. I am just happy with the win, but I expected more from myself if I am honest.”

He will play fellow Egyptian Karim Abdel Gawad after he recovered from a game down to defeat Germany’s Simon Rösner.

Momen outclassed Coll in November’s World Championship title decider and followed that up with another 3-0 triumph against the Kiwi at the Troilus Gold Canada Cup three months later. But Coll prevailed in their latest battle and he will line up against World No.1 Mohamed ElShorbagy for a place in the final.

“I’m stoked. I set myself a goal of winning a lot of these ones when we first come back and it was a big one there against Tarek,” said Coll.

Mohamed ElShorbagy will look to gain his revenge on Coll following the Kiwi’s first victory over the Egyptian back in March at the Windy City Open, which was the penultimate men’s PSA World Tour event to take place before the Covid-19 enforced suspension of professional squash.

In the women’s event, top seed Camille Serme sent defending champion Joelle King out of the 2020 Manchester Open after claiming a 3-1 victory.

Serme recovered from three game balls in the opening game to go ahead and, despite squandering a 7-3 lead to drop the second, the World No.3 was outstanding in the final two games to seal a 12-10, 9-11, 11-5, 11-4 victory which will see her take on No.4 seed Hania El Hammamy in the semi-finals.

“I’m very happy to have won, it was a big match and I expected it to be,” said Serme. “It seemed like there were long rallies and we were both running a lot trying to find our targets at the back and she did really well with her lobbing and having me in the back. I was trying be more in front of her.

“She had a bit of a low in the fourth after serving out and I thought that was my chance and I was happy to win it quite comfortably. In the last game, even though I was quite in front, I was a bit worried that she would come back, so I was trying to really stay focused.”

World No.6 El Hammamy swept aside fellow Egyptian Salma Hany in straight games in just 23 minutes. The 20-year-old will now go head-to-head with top seed Serme in the next instalment of their enthralling rivalry, with the pair winning two apiece in their four battles during the 2019-20 season.

Meanwhile, 2019 runner-up Tesni Evans followed King out of the tournament as she fell to England No.1 Sarah-Jane Perry in straight games. Both players had fought for 3-2 victories in the previous round, but it was Evans who appeared to struggle more with the physicality of the match, with the Welsh player pulling up with an injury at the end of the second game.

She was unable to move properly, and although she put up a strong fight in the third game, it was Perry who secured victory in just over half an hour, setting up a clash with World No.4 Nour El Tayeb in the semi-finals.

“I don’t think that was the best of Tesni today,” Perry said. “I didn’t want to get dragged into the long up-and-down the backhand exchanges which have been present in some of our previous matches. I tried to just step up and take control, I know I have played well in practice, so I just tried to get that out on court.”

The 2020 Manchester Open semi-finals begin tomorrow (September 21) at 17:00 (GMT+1). Action will be shown live on SQUASHTV (rest of world), Eurosport Player (Europe only) and multiple mainstream broadcasters around the world such as BT Sport and ON Sport.