Alan Thatcher June 13, 2019 No Comments on Momen gets The Bullet as Abouelghar reaches World Tour Finals showdown against Gawad

Flat out: Mohamed Abouelghar takes it lying down after beating Tarek Momen for the first time to reach the final in Cairo

Mohamed Abouelghar gained his first win over Tarek Momen and Camille Serme, the only non-Egyptian in the semi-finals, beat Nouran Gohar after a titanic first-game tiebreak to reach the finals of the CIB PSA World Tour Finals end-of-season spectacular in Cairo.

There will be a new name on the trophy in both the men’s and women’s events as World No.4 Karim Abdel Gawad and World No.7 Abouelghar booked their final berths at the expense of defending champion Mohamed ElShorbagy and World No.3 Momen. 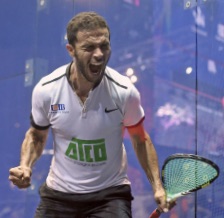 World Tour Finals debutant Abouelghar claimed his first victory over Momen at the 10th attempt to reach the biggest final of his career, continuing what has been a superb week for the 25-year-old so far.

Abouelghar, the lowest seeded player in the men’s event, finished top of Group A ahead of Gawad and World No.1 Ali Farag, and he played some scintillating squash to recover from a game down to beat Momen, despite five previous defeats to his compatriot this season.

Momen squeezed home in the opening game but Abouelghar dominated the second with an array of devastating attacking play, hitting nicks and slicing crosscourt kills and drops that forced Momen into awkward stretches and lunges.

After a tense opening phase to the third game, Abouelghar enjoyed a crucial spell of dominance to reach match ball at 10-6. He tinned a volley which would have wrapped it up and Momen closed the gap to a couple of points before an error gave the match to his younger opponent.

Abouelghar, known as The Bullet, used his array of skills and deception to break up the rhythm of the match and keep Momen guessing where the ball was going. In the first game, Abouelghar made too many mistakes. That error count was reduced as he continued to attack and he was rewarded with a magnificent victory in front of an animated home crowd.

“10-0 would have looked so bad,” said 25-year-old Abouelghar afterwards. “I had to make the gap closer between me and Tarek, at least. For people who don’t know, I have not beaten Tarek in training, so to come here and win against him on a big stage like this is a bonus, and I’m very happy. I lost to Tarek five times this season… every time I played him I felt like I was closer, and I’m happy with the way I managed it until the end.”

Abouelghar defeated Gawad 2-0 yesterday (June 12) to top their group and the form book is in the younger Egyptian’s favour, with that victory being the most recent in a three-match win streak. 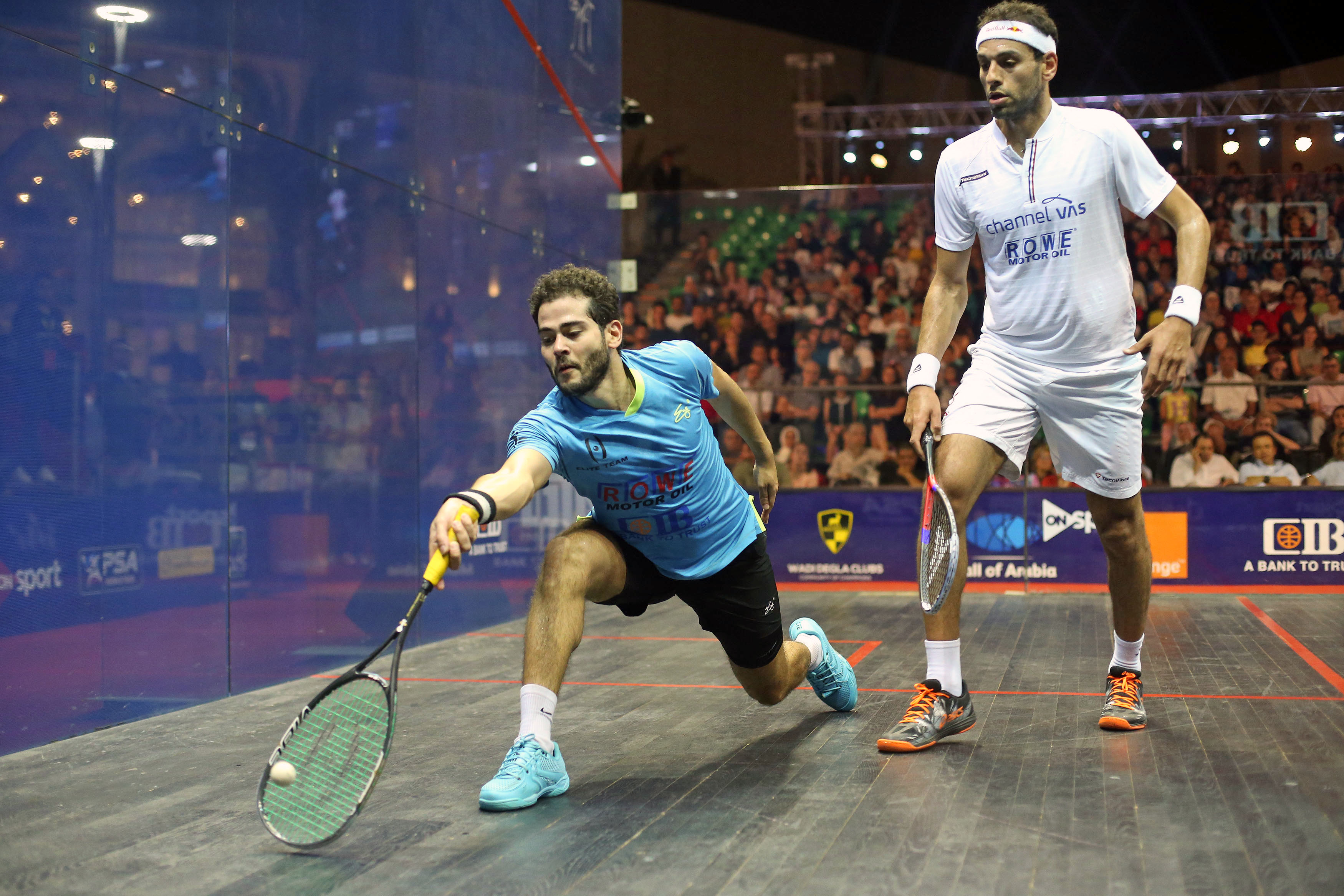 Karim Abdel Gawad (left) gets in front of Mohamed ElShorbagy

ElShorbagy had won the two previous instalments of the World Tour Finals, and he started well in his fixture with Gawad as he took an early lead in the opener, before four uncharacteristic errors from the 28-year-old handed Gawad a one-game advantage.

Gawad then powered to victory in the second game, dropping just two points to advance to the final of this tournament for the first time. The victory also continues Gawad’s impressive form on home soil, with the 27-year-old claiming major titles at the Black Ball Open and PSA World Championships in Cairo in recent years.

“It’s very unexpected, getting married on Friday and now being in the final of the World Tour Finals,” said Gawad.

“When you’re married on the Friday, you don’t expect too much to do at the tournament and you don’t want to go on court, but once you get here and on court and you see everyone cheering for you, it gives you a lot of power. You just relax and play your best squash. I’m really happy to be in the finals and to be playing in Egypt tomorrow.” 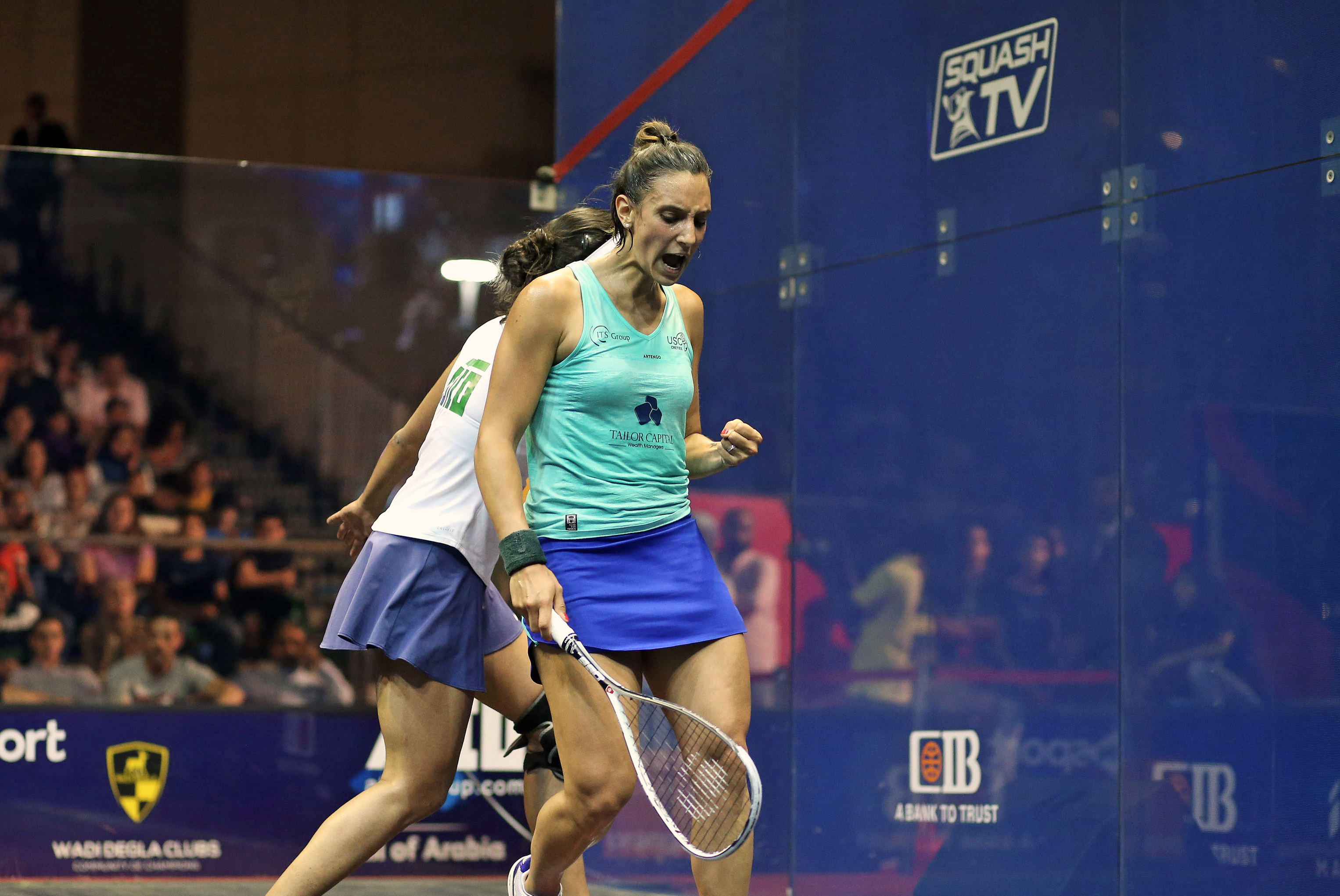 France’s Serme avenged her British Open final defeat to World No.4 Gohar on semi-finals day at the season-ending event taking place in Cairo’s Mall of Arabia.

Serme will be the first female French player ever to appear in the finals of this tournament after she ended a four-match losing streak to Gohar to win 20-18, 11-9 in an enthralling 37-minute affair.

The World No.3 had lost to Gohar just three weeks ago in the final of the prestigious British Open and hadn’t beaten the Egyptian since the 2016-2017 PSA World Tour Finals, which was held under a best-of-three games format.

Today’s semi-finals used that same format, and it was Serme who emerged victorious again, with a crucial victory in a mammoth first game laying the platform for her progression into the final, where the 30-year-old from Créteil will play World No.1 and two-time runner-up Raneem El Welily.

“I feel over the moon,” said Serme. “Obviously they [the crowd] were cheering for the home Egyptian player, but I’m just so happy because Nouran has been playing really well the last few months. In El Gouna and at the British she beat me quite comfortably, and I was happy today that I found some good solutions.

“I’m very proud and very lucky to have had a few friends here clapping for me. I know a lot of people were watching at home, my husband, family and friends, so I just thought about them. Even Philippe [Signoret], my coach – I’m really happy for them as well. It’s funny to play against Raneem again as we played in the pool matches. I can have a second chance in the same tournament, so I’m just going to enjoy and give it my all.” 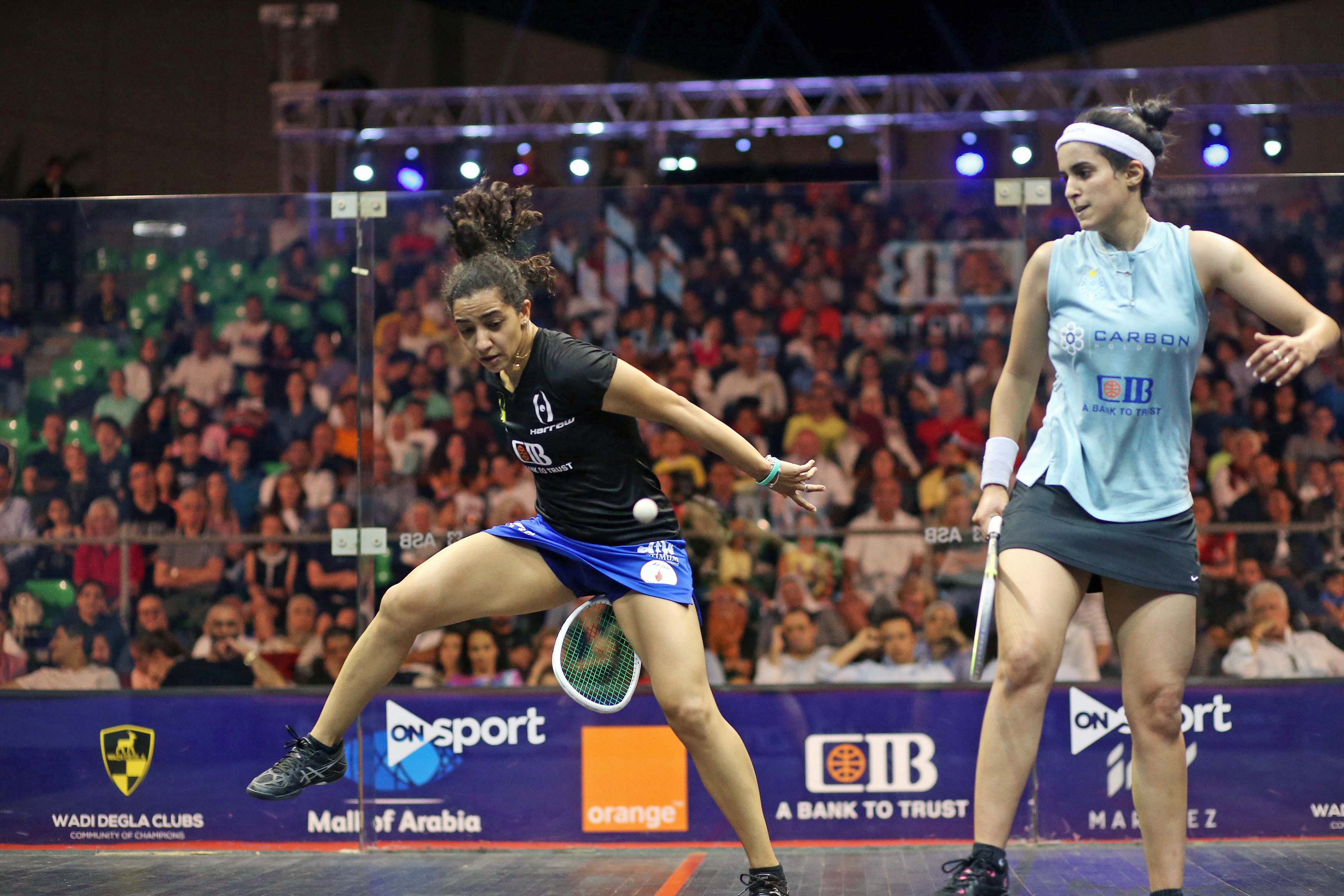 El Welily remains undefeated in the tournament as she followed up a first place finish in Group A with a 2-1 victory over World No.5 Nour El Tayeb, winning 11-9, 9-11, 11-1. The opening two games were closely-contested as the Egyptian duo enraptured the crowd with some sensational rallies that saw each player pushed into all four corners of the court.

But El Welily was sublime in the third game as she blew El Tayeb away, dropping just a solitary point to set up a mouthwatering final encounter with Serme. El Welily defeated Serme 2-1 in the group stages of this tournament three days ago and has won 16 of their 19 meetings on the PSA World Tour, including the last six in a row.

“I think I just tried to be more active [in the third] rather than being passive in the second,” said El Welily ahead of her ninth final of the season.

“She played really well and pushed me to the back and then dragged me to the front to make the gap seem big. I’m glad with the way I fought in the second, I came all the way back to 9-10 and couldn’t quite make it, but it made a difference somehow, so I’m very happy to come out as the winner today. Hopefully tomorrow I play some good squash and if I win, I’ll be very happy.”

The finals of the CIB PSA World Tour Finals will revert to the traditional best-of-five games scoring format, with play commencing at 19:30 (GMT+2). Both matches will be shown live on SQUASHTV (rest of world), Eurosport Player (Europe only), the official Facebook page of the PSA World Tour (Indian subcontinent only) and ON Sport (Egypt).