It was a very early start for me yesterday as I had to catch a ‘Flixbus’ from Angers to Nantes at 7am. Flixbus is quite a new phenomenon in France, being their equivalent of National Express, and has caused some controversy as it directly competes with SNCF, the French railways. At just 4,99 Euros for the trip you can see why.

I am dropped off at the North Eastern fringes of the city by a tram hub. My next aim was to get to La Maison du Squash at Sautron for the Amateur Tournament, which is completely the other side of Nantes. Looking at the tram, bus and rail connections, it seems that the trip would take too much time out of the day, so I unfortunately shelve this idea.

Instead, it is just a walkable distance to the next port of call – D’Sport and Co, a brand new squash club on the Nantes scene. It is here that I am meeting up with my friends from Northamptonshire – ‘Lings On Tour’ – who come away to France every September to play squash and just have a good time.

The Lings crew are still en route from St. Malo ferry port, so instead I walk to a large ‘centre commercial’ to grab some breakfast. I then decide to arrive at D’Sport and Co a bit early as they will be open so I can chat to the owners.

I am greeted there warmly by husband and wife team, Cyril and Gaelle Sepsault Le Moigne. The club is built into a standard industrial estate warehouse unit and Cyril and Gaelle have done a fantastic job: four CourtTech courts in a row, a lovely bar area overlooking the courts with kitchens to the side, a studio room, plush changing facilities and a balcony area overlooking the courts.

As with Squash du Lac de Maine yesterday, a main feature of the club is the amount of natural light coming into the building via the extensive skylights in the roof. You could literally play squash without artificial lighting in the day (sorry Philippe!).

They also have built an indoor beach volleyball arena, which also allows people to play other sports such as ‘Beachminton’ (who knew that was a thing!). 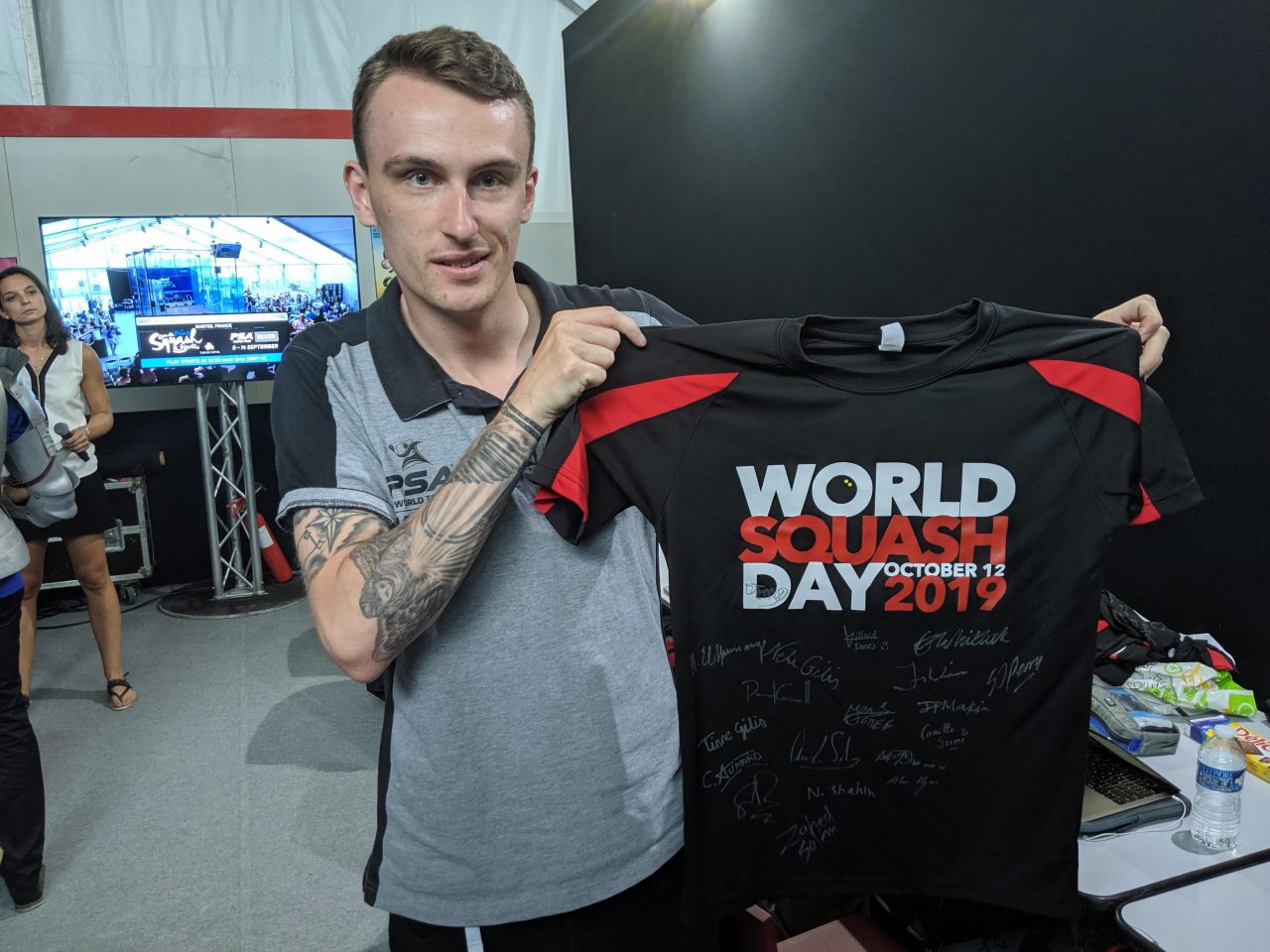 Cyril and Gaelle have invested their life’s savings into this project and have invested well. Early signs are good, with over 200 regular players having been attracted to the facility, with many more ‘casuals’ who play from time to time.

They believe squash is on the cusp of a revival in France, citing the fact that Decathlon, the major sports retail brand, has invested in a squash dedicated brand ‘Opfeel’, with whom they have partnered. The French Open in Nantes is also playing its part on that front.

Like at Lac de Maine, they are mainly concentrating on the leisure player market. They have also affiliated the club to the Fédération Française de Squash and the local Nantes Association, which is included in the annual membership fee. Players then pay for court time, although there is also an all inclusive membership for 700 Euros which allows members to play unlimited any time.

The Lings crew arrive and we all get changed to go on court. We have the courts booked for three hours and everyone enjoys both singles and doubles play, especially doubles as they love doubles at Lings.

One of the club’s most regular players, Nicolas, arrives and plays singles against four or five different English players. When I play him, he tells me his is 55 and has been playing squash for 40 years. He is still at a very decent level and although I lose 3-0, it is a very good game. In fact, he only loses one of his matches, to one of the better players at Lings, and 3-2 as well.

The group then heads for the house that we have hired in Nantes for our stay, with a splinter group going to the huge Leclerc supermarket in that centre commercial I visited earlier to buy provisions. The house is amazing, in the plush Nantes suburb of St Sébastien-Sur-Loire, able to accommodate 22 people, with swimming pool.

We are not able to admire the house for long, as we have to get to the Chateau for the semi-finals. Arriving at the venue, we are struck immediately by an unusual phenomenon – a long queue at a squash tournament, which stretches over the moat bridge and into the street. Luckily, as we all have tickets, we can join the left hand queue which is much shorter.

I have been in touch with Ian White of Squash Travel earlier and he has arranged for me to collect my ticket on the door. My first task was to find Matt Coles of the PSA to find out how the World Squash Day shirt signing is going, but he finds me easily dressed in my own World Squash Day T-shirt. He has done a fantastic job, as the shirt is full of player signatures. He tells me he will take it to San Francisco for the NetSuite Open so he can obtain even more top player signatures – awesome!

Romain Suire, the highly animated and enthusiastic tournament MC, is as good as his word, giving World Squash Day a huge plug over the mic, as well as for Squash Travel.

Unfortunately, I am unable to join the Squash Travel group as they have already installed themselves in back wall seats and there are none free in their vicinity, tickets not having a seat number allocated.

The Lings crew and I find some seats high up to left hand side of the backwall. I won’t go into great detail about how the matches went as this has been done by other more qualified people than me in great detail.

The only thing I will mention is that we decided as a group to go against the grain of the main crowd and support our man Joel – well he’s Welsh so that makes him British which is good enough for us! We hope you could hear our raucous ‘come on Joel’ and foot stamping on the Squash TV coverage. We also hope this contributed in some small measure to helping Joel achieve that remarkable comeback.

The Lings crew only had tickets for the first semi-final session so have headed into town to eat. I decide to call it a day after the SJP/Sobhy semi-final as I would otherwise be in danger of an expensive sole taxi ride back to the house.

I find them near to the Chateau and I join a small group of 4 on the hunt for a taxi. We head towards La Gare and have to call in to a local hotel to obtain a taxi firm telephone number.

A long and energetic day and my voice is a bit croaky today, like I’ve been to a great gig or major football match. Not used to that after a squash tournament!