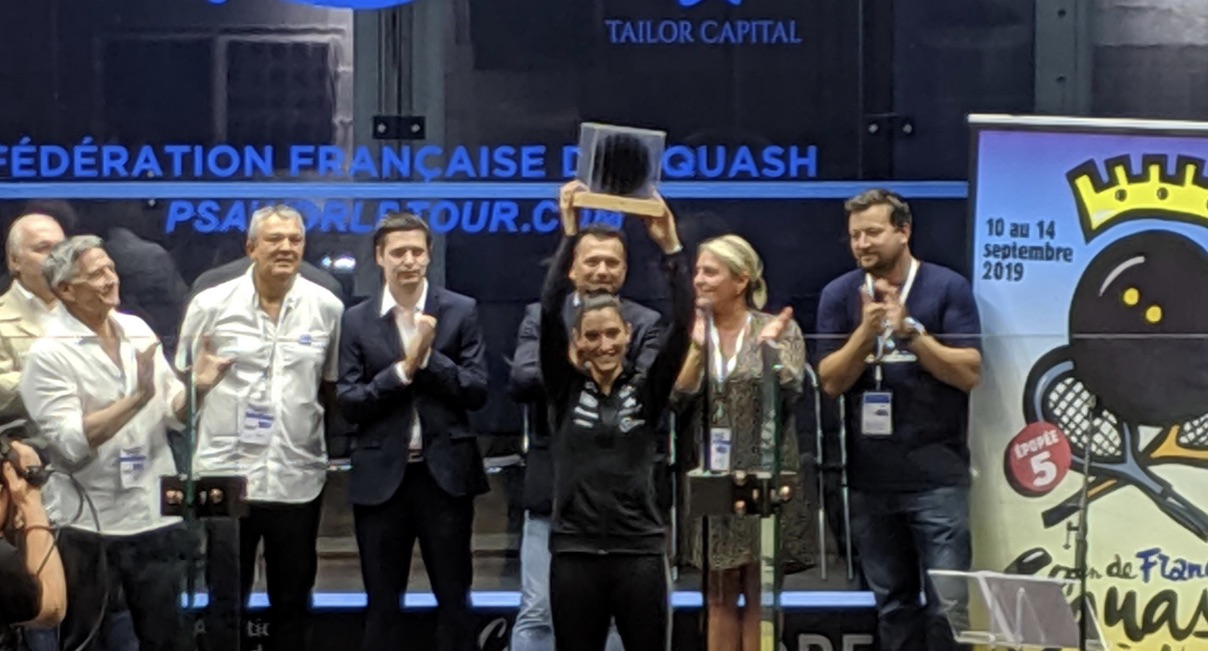 So finals day has arrived and after yesterday’s semis, promise to provide another fantastic spectacle at the Château des Ducs de Bretagne. I am especially looking forward to the women’s final as the French No. 1 will try to become the French Open champion in front of what is likely to be a highly vocal and supportive crowd.

Before all that, though, we travel over to the West of Nantes, as we have been invited to a spot of brunch at the home of Christophe and Marie Bouin. The Lings club has made fantastic links with Squash La Rochelle, where one of Christophe and Marie’s children is coached by Stéphane Brévard, a top coach in France. Squash La Rochelle is a major centre of coaching for up and coming French juniors.

Christophe is a squash fanatic, a member at La Maison du Squash where some of the early French Open matches were played, and is involved in the organising committee of the Open de France.

We are also joined there by Eric and Sylvaine Fargeas, who are also heavily involved in squash and have two juniors who love playing. Indeed, it is through Eric and Sylvaine that Mike first made contact with Squash La Rochelle as one of Mike’s friends played there and suggested Mike as someone who could host their daughter to play squash and improve her English.

As I wrote in an earlier blog, where I talked about ‘Squash a la Franglaise’, these kind of link-ups reflect the reality of the deep friendship that exists between our two countries. Yesterday was fully reflective of this, with a fantastically warm welcome and the most amazing of spreads.

Feeling perhaps a bit full to play squash, we nevertheless all head back to D’Sport and Co for the Lings Doubles Competition. The pairings have been carefully selected to be as balanced as possible and ensure a level playing field.

On arrival, the Squash Travel Tour are enjoying lunch after their morning playing session and have been joined by Sarah-Jane Perry. We are informed by our hosts that the Gilets Jaunes demonstration in the city centre is causing a bit of havoc, which actually caused Mel White from Squash Travel to cancel their afternoon plans for a Loire river cruise due to a lack of taxis. The group therefore stays longer than anticipated and has a try at the beach volleyball.

This also leads to the Lings group cancelling evening plans to go to the centre of Nantes for a bite to eat and a look around. Cyril and Gaelle at D’Sport recommend an area on the banks of the Loire called Trentemoult, which is apparently picturesque and has lots of restaurants and bars. I am left wondering if the Open de France will be affected and we wait with tenterhooks for updates from the organisers.

The doubles competition ensues with lots of fun on court, with Ray and Dave emerging victorious. I am partnered with Emily, the sole female member of the Lings Tour party, who competed to a high level as a junior and now plays for her university in Sheffield, as well as in the Yorkshire League. We finish a creditable fourth.

Fortunately the Open de France is unaffected by the troubles in the city centre and is carrying on regardless. The Lings crew head off towards Trentemoult, dropping me off by the bridges over the Ile de Nantes for a short walk to the Chateau.

The final of the Amateur Open is just concluding as I arrive so I head into the arena to try to grab a decent view, ending up in exactly the same seat as the previous night. The atmosphere is already building as the eagerly anticipated women’s final is fast approaching.

After the usual amazing dance, music and lights performance (a big shout out to all the performers is most definitely in order), the players are introduced on stage. I think it is fair to say that the crowd lifted the roof off the arena for Camille.

Onto the men’s final and Romain and Charlotte are again adept at building up the atmosphere and get into the spirit of the chateau with their costumes and hobby horses. They are then joined by a familiar face bearing a fine wig. Great to see Grégory Gaultier joining in like this.

After a close first game, that went to a tiebreak, I did wonder if we were in for another marathon match, especially given the monstrous length of some of the rallies. However, I think that the exertions of yesterday took its toll on Joel Makin and the freshness of Paul Coll allowed him to dominate from that point. I tried my best with the odd ‘Come on Joel’ but it just was not the same without my friends from Lings!

I stay for the trophy presentations, although with the number and length of some of the speeches, it feels like we have watched another match! I get that it is important for the organisers to reflect and thank everyone involved, plus allow the VIPs to speak, but it is always a shame that the arena then half empties for the crowning of the champions.

I then ponder the walk home as 30 Euros for a taxi is quite steep for a sole passenger. However, after a slight reflection, I call the taxi company and am picked up by the same taxi driver as the night before.

I tell him all about squash and the fantastic squash tournament that happens every year in his home city.